Microsoft removed the option to defer feature updates in the Settings application in Windows 10 version 2004 for professional versions of the operating system. The option was never there to begin with for the Home editions.

What Microsoft did not reveal in the change announcement was that there is another option, an even better one.

The — almost — undocumented feature is managed in a Tech Community article only it appears and was discovered by Canadian blogger Ed Braiter (thanks Woody) . It allows administrators to specify a desired target version of Windows 10 in professional versions.

The setting works in all professional versions of Windows 10, e.g. Windows 10 Pro and Enterprise, and is supported from version 1803 onward. 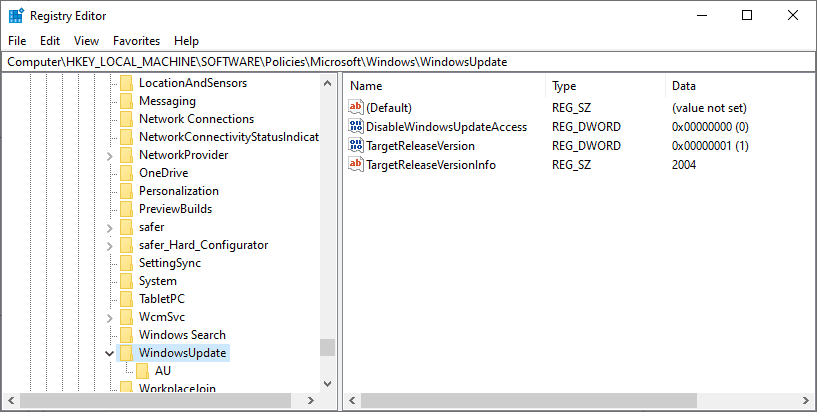 All you have to do is specify the target release version of Windows 10 that you want the system to be on. Here is how that works in detail:

You can also use en elevated PowerShell prompt to make the changes:

Delete the created Dword values in the Registry again if you want to reset the functionality. You may also modify the target version at any time.

Note: you can only specify the current or a newer version of Windows 10. Specifying a previous version, e.g. 1803 while already on Windows 10 version 1909 will do nothing.

If you specify a newer version, Windows 10 will move to that particular version and not another one, even if a newer version is available; that’s great news for administrators who don’t want systems to be upgraded to the latest feature update version of Windows 10.

If the same version is specified, Windows 10 will stay on that version until the “end of service”. Microsoft has a loose definition for the term “end of service” but it is clear that the updating will be enforced at one time before the Windows 10 version reaches end of support.

Thank you for being a Ghacks reader. The post You can now set the target Windows 10 version in professional editions appeared first on gHacks Technology News.

Best on-ear headphones 2021: our pick of the best supra-aural cans

Hellblade 2 dev’s Project: Mara could be one of the best-looking next-gen games

Why T-Shirts Promoting the Capitol Riot Are Still Available Online