Windows 10 20H2 update later this year will be minor

Microsoft revealed yesterday that the next feature update for the company’s Windows 10 operating system will be called Windows 10 20H2 and that it will be a minor update just like Windows 10 version 1909.

When Microsoft published Windows 10 version 1909 it stated that future updates would not be similar to the minor feature update, but it changed the strategy soon thereafter.

Devices that run an older version of Windows 10 can’t be upgraded this way, a full installation is required to bring Windows 10 20H2 to these devices. 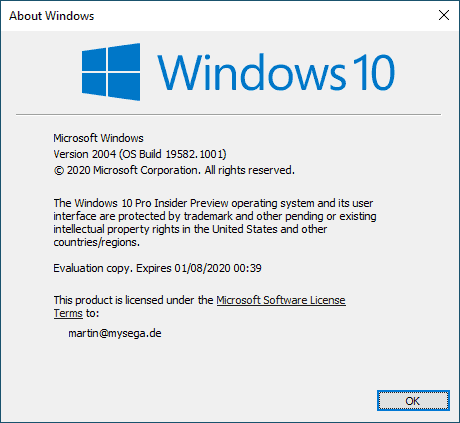 The company will keep on using friendly names, e.g May 2020 Update, as well in “consumer communications”.

Windows 10 version 20H2 is a minor update and as such, is smaller in scope. Microsoft does note that it will be the first version of Windows 10 to come with the Chromium-based Microsoft Edge browser installed, and that it will “offer a scoped set of features to improve performance and quality”.

Support for the consumer Windows 10 versions 1809 and 1903 will run out in late 2020. Enterprise customers get 30 months of support for each Windows 10 feature update that gets released in the second half of the year. The upcoming Windows 10 version 20H2 will be no exception to that.

Microsoft’s rapid pace of delivering two feature updates per year in the past has raised criticism both from consumers and Enterprise administrators. While it has been possible to skip a feature update, e.g. only install the second feature update of each year on Enterprise devices, or even less, staying recent has been a strenuous process.

The switch to releasing one full feature update per year and a minor update in the second half makes the whole process more manageable thanks to the quick installation of the second update and the lack of changes that it comes with.

Now You: What is your take on this?

Thank you for being a Ghacks reader. The post Windows 10 20H2 update later this year will be minor appeared first on gHacks Technology News.

Uber, After Buying Postmates, Lays Off More Than 180 Employees

Samsung May Build $10B Foundry in Austin, Texas

Can an Executive in Kansas Save Movie Theaters?

Intel Records Record-Breaking 2020, Will Build ‘Most’ 7nm in Its Own Fabs