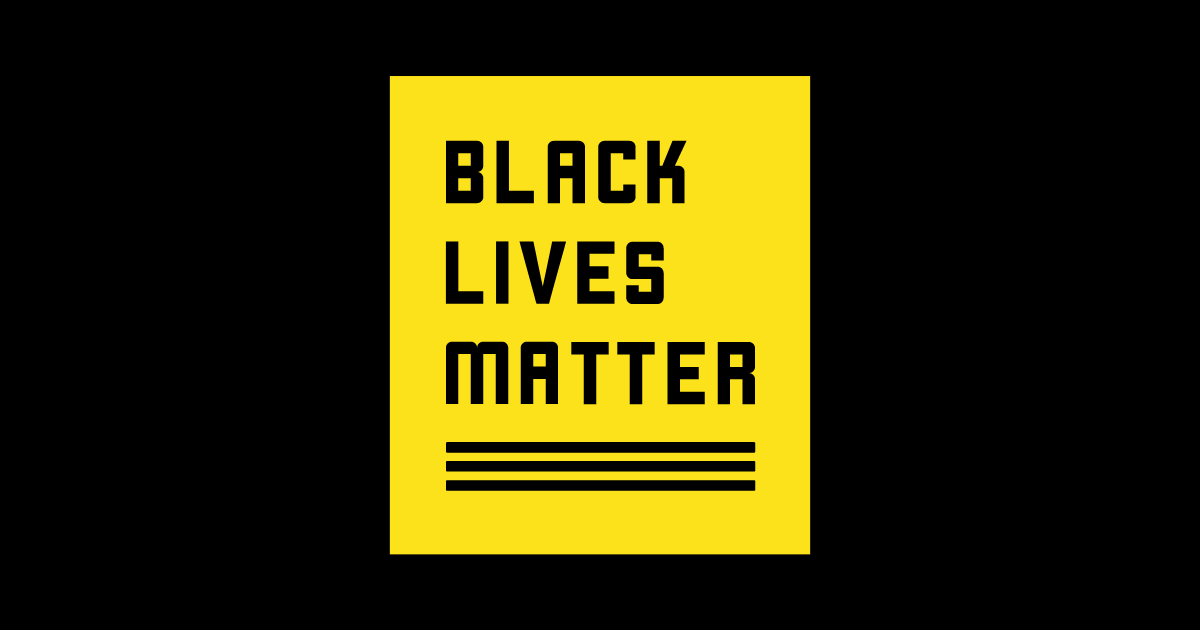 FILMS ABOUT WOMEN OPENING AND COMING TO STREAMING/VOD

Once Upon a River – Written and Directed by Haroula Rose 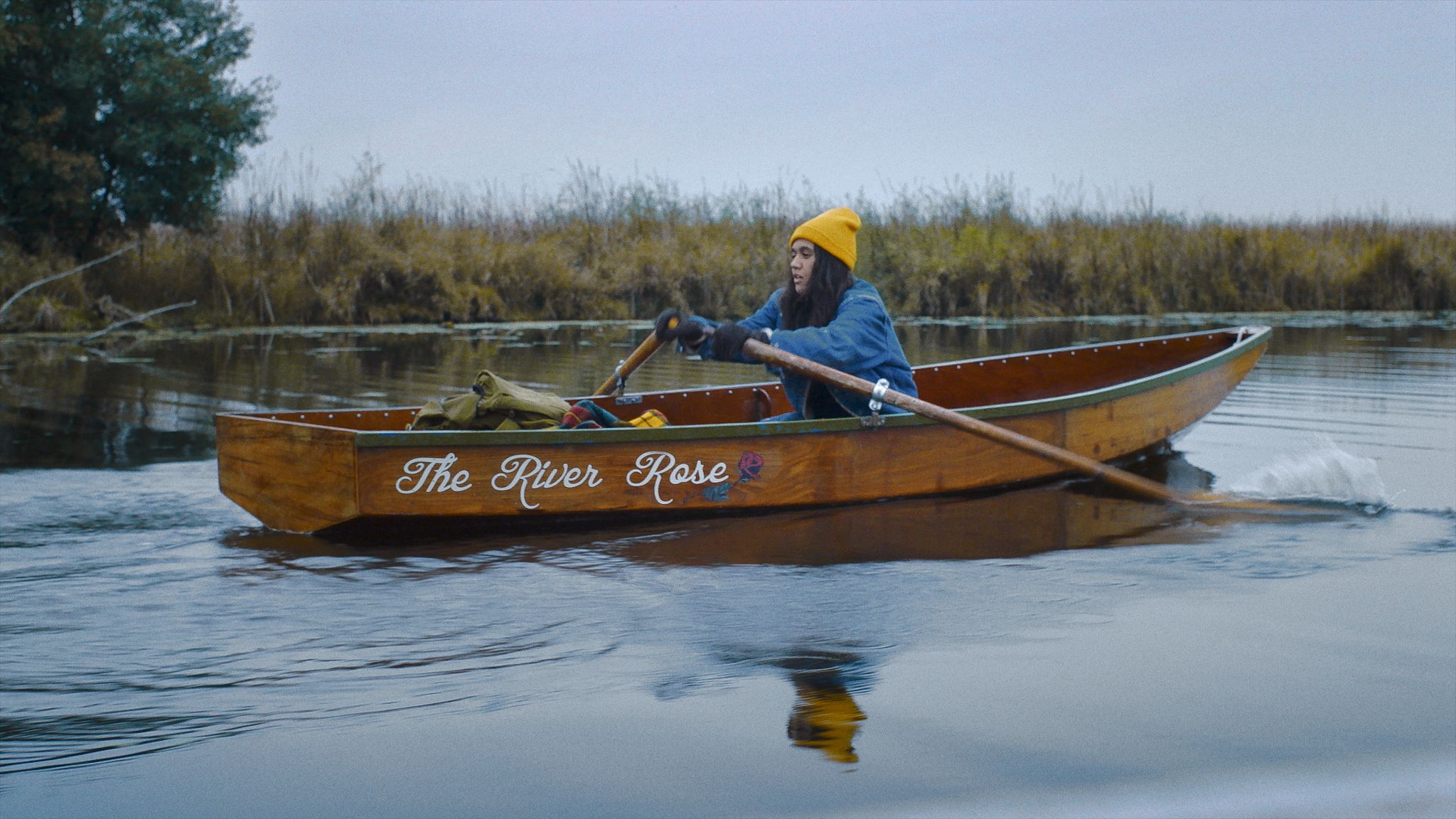 “Once Upon a River”

Based on the best-selling novel by Bonnie Jo Campbell, “Once Upon A River” is the story of Native American teenager Margo Crane (Kenadi DelaCerna) in 1970s rural Michigan, who, after enduring a series of traumas and tragedies, sets out on an odyssey on the Stark River in search of her estranged mother. On the water, Margo encounters friends, foes, wonders, and dangers; navigating life on her own, she comes to understand her potential, all while healing the wounds of her past.

“Once Upon A River” is now available via virtual cinemas. Find screening info here. 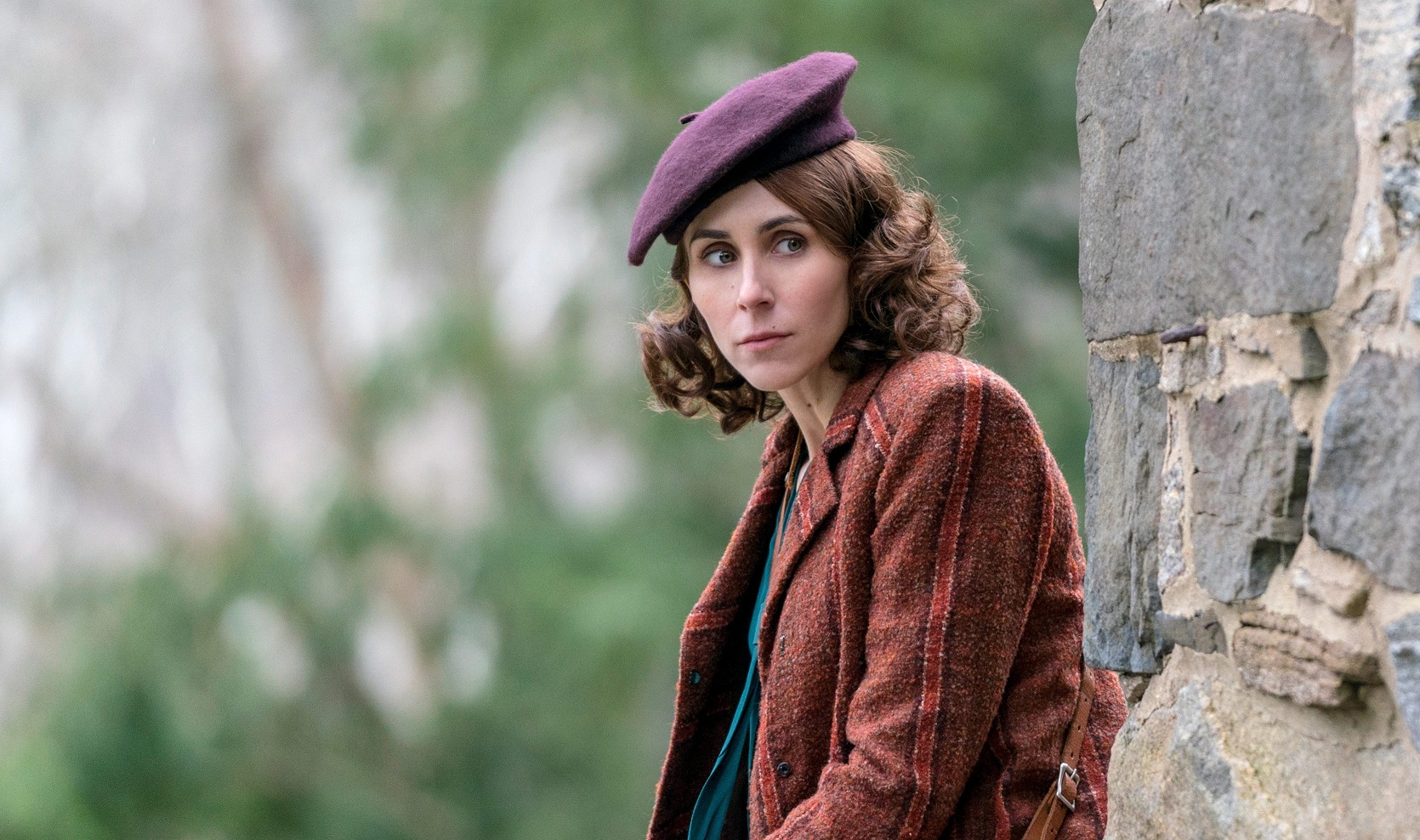 In the beginning of WWII, with Britain becoming desperate, Churchill orders his new spy agency — SOE — to recruit and train women as spies. Their daunting mission: conduct sabotage and build a resistance. SOE’s “spymistress,” Vera Atkins (Stana Katic), recruits two unusual candidates: Virginia Hall (Sarah Megan Thomas), an ambitious American with a wooden leg, and Noor Inayat Khan (Radhika Apte), a Muslim pacifist. Together, these women help to undermine the Nazi regime in France, leaving an unmistakable legacy in their wake. Inspired by true stories, this original screenplay draws on SOE, OSS, and CIA files. This is the untold story about the personal sacrifice of courageous individuals who put their lives on the line to fight for freedom.

“A Call to Spy” is now in theaters and available on VOD. Find screening info here. 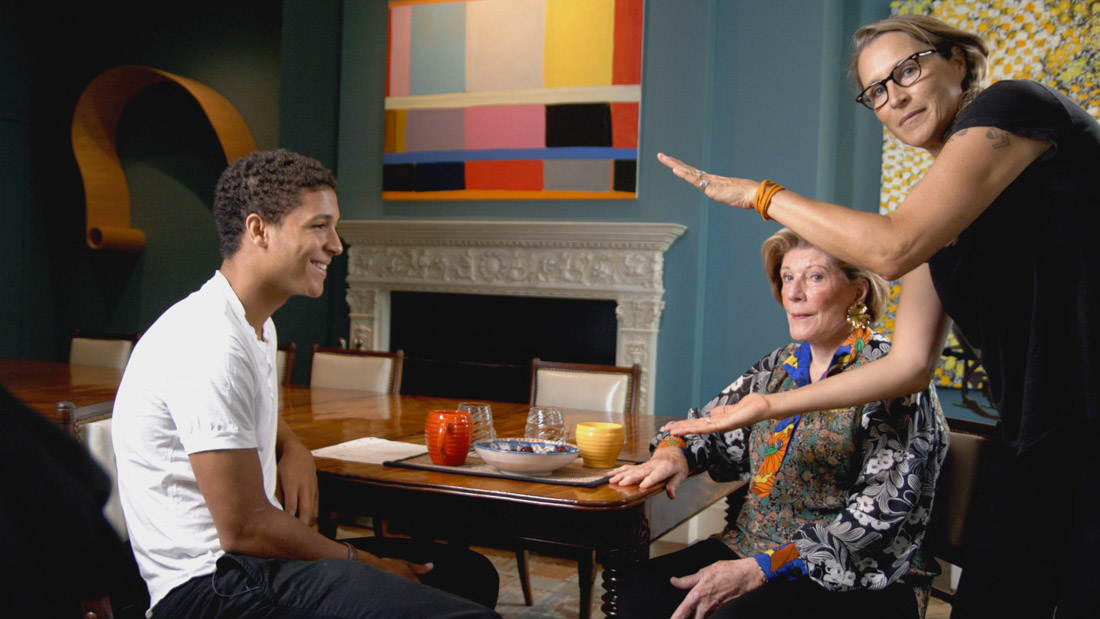 Catherine Gund’s deeply affectionate paean to her mother — philanthropist and art collector extraordinaire Agnes Gund — tells two stories that meld into one. There’s the elegant, if conventional divorcée and mother of four who leaves Cleveland for New York and becomes ensconced in the art world — in 1991 she became president of the board of the Museum of Modern Art. And there’s the woman whose profound experiences with guilt and empathy fuel her decision to sell a beloved Roy Lichtenstein painting and gift $100 million to the Ford Foundation’s Darren Walker to establish The Art for Justice Fund — with the aim of reducing mass incarceration.

It’s 1998 and over the course of one night at an Arkansas hospital, a junkie nurse (Angela Bettis), her scheming cousin, and a group of black market organ-trading criminals get caught up in a heist gone wrong.

After the disappearance of her husband, Lemon (Danielle Deadwyler), a struggling farmer in an isolated Appalachian community, must repay her husband’s debt to the oldest family on the mountain and their murderous biscuit-making matriarch in order to save her young son’s life. Armed with only her wits and tenacity, Lemon must unravel the mysteries her husband left behind or lose everything she’s ever loved.

“The Devil to Pay” is now playing in drive-in theaters. It will be available on VOD October 6.

When Jane (Sally Hawkins) is dumped at the altar she has a breakdown and spirals into a chaotic world, where love — both real and imagined — and family relationships collide with both touching and humorous consequences.

When a group of teen girls sets out to scare their reclusive new neighbor, what seemed like a simple prank goes horribly wrong — and not all of them will make it home.

“Naughty Books” is a feature-length documentary about the boom of self-published romance novels in the wake of “Fifty Shades of Grey.” It follows three authors who became millionaires in under a year using pen names to sell erotica on Amazon for $1.99. Along the way, they upended the book industry, challenged ideas of female sexuality, and re-imagined the American Dream for the 21st Century.

“Naughty Books” will be available on VOD October 6.

It’s Senior year at East Great Falls! Annie (Madison Pettis), Kayla (Piper Curda), Michelle (Natasha Behnam), and Stephanie (Lizze Broadway) decide to finally harness their girl power and band together to get what they want in their last year of high school.

FILMS MADE BY WOMEN OPENING AND COMING TO STREAMING/VOD

On the Rocks – Written and Directed by Sofia Coppola

Laura (Rashida Jones) thinks she’s happily hitched, but when her husband Dean (Marlon Wayans) starts logging late hours at the office with a new co-worker, Laura begins to fear the worst. She turns to the one man she suspects may have insight: her charming, impulsive father Felix (Bill Murray), who insists they investigate the situation. As the two begin prowling New York at night, careening from uptown parties to downtown hotspots, they discover at the heart of their journey lies their own relationship.

“On the Rocks” is now in theaters. It will be available on Apple TV October 23. 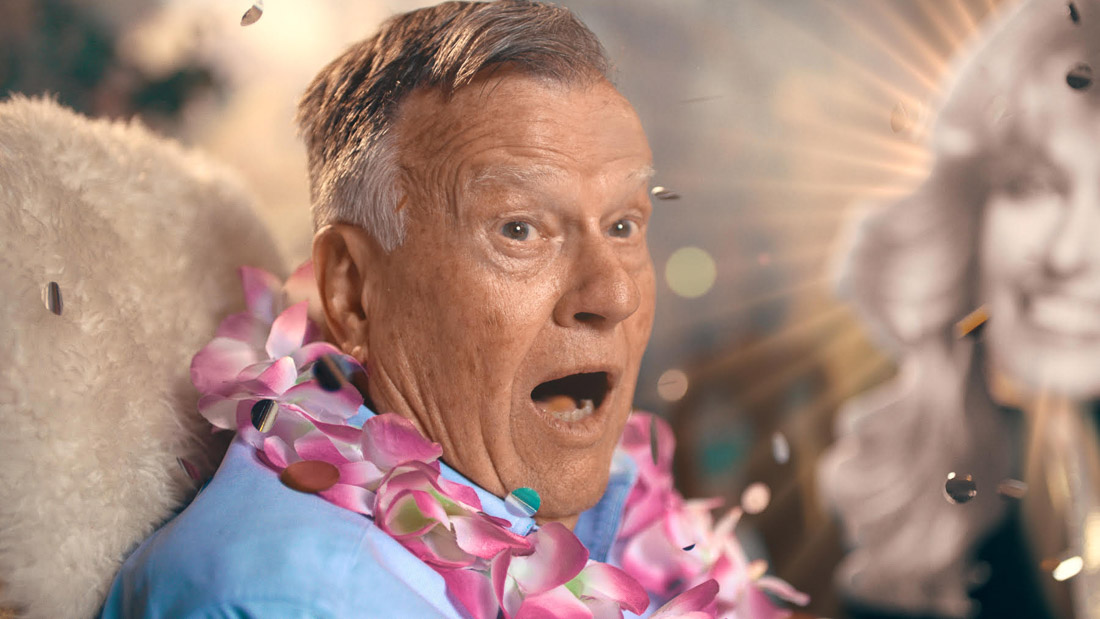 “Dick Johnson Is Dead” sees a filmmaker struggling to come to terms with her father’s mortality the best way she knows how: by making a movie. In an effort to simultaneously keep her father alive forever and cope with his inevitable demise, Kirsten Johnson decides to make a film about him dying, staging elaborate, inventive death scenes and recording them. “I wanted to make something funny!” Johnson told us. “And we had already lived through to the end of my mother’s Alzheimer’s, and I, for one, literally could not bear to experience this stretch of life with my father without imploring cinema to help us find a new way through.” While it’s indeed funny, Johnson’s “best attempt to keep [her] father from dying” is also a thoughtful meditation on identity in the wake of a dementia diagnosis, and a touching tribute to a man whom she’s loved and been loved by her entire life. (Laura Berger)

“Dick Johnson Is Dead” is now available on Netflix.

Save Yourselves! – Written and Directed by Eleanor Wilson and Alex Fischer 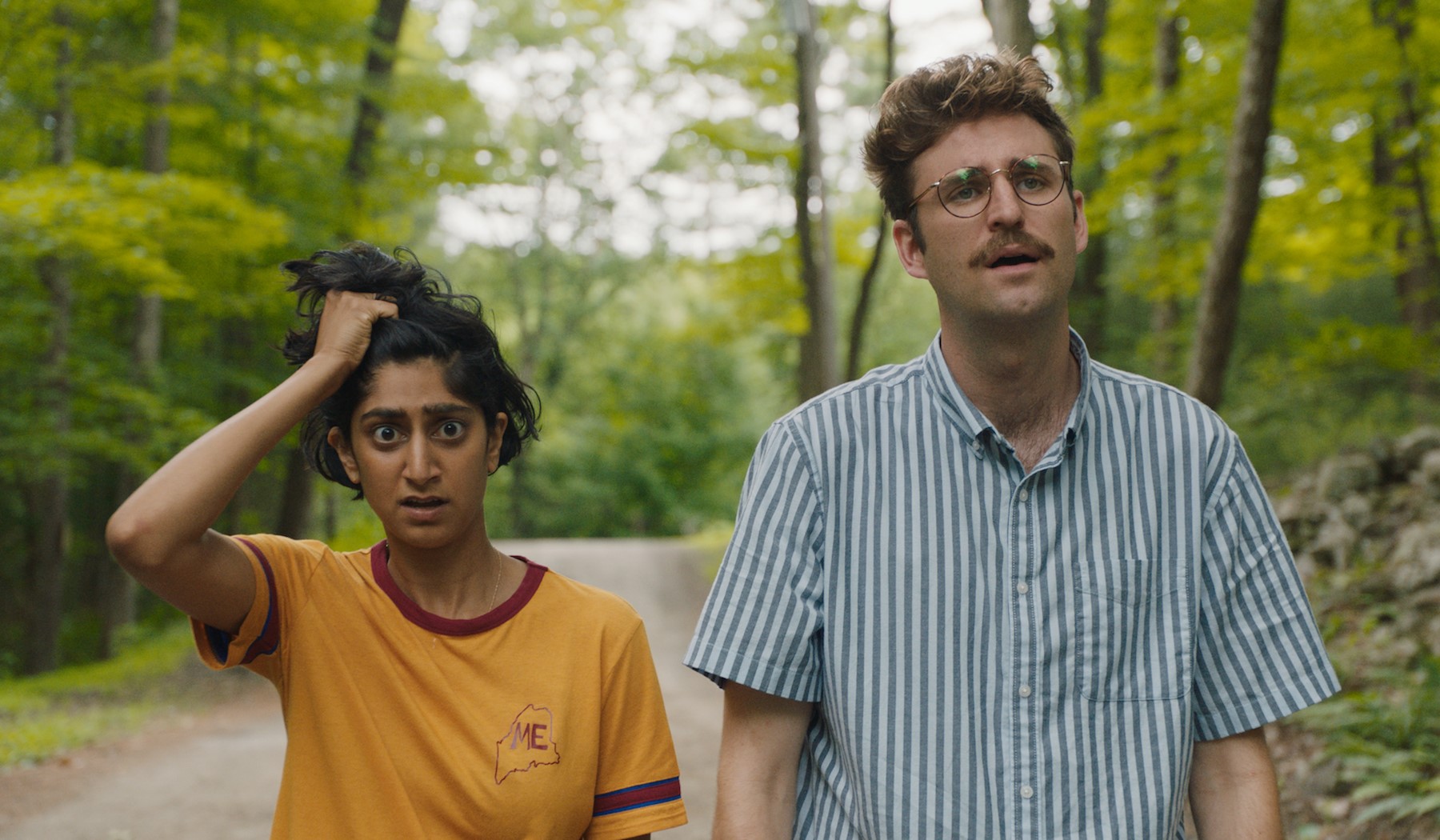 “Save Yourselves!”: Matt Clegg

Jack (John Reynolds) and Su (Sunita Mani) are a hip Brooklyn couple who, like many of their friends, find themselves dependent on technology and unable to put down their phones. Fearing their mindless scrolling may impact their connection with each other, they seize the chance to head to an isolated cabin in the woods, vowing to unplug from the outside world for a week. Sheltered from texts and push notifications, they are blissfully unaware that the planet is under attack. As strange events unfold, the couple must figure out a way back to civilization — or what’s left of it.

“Save Yourselves!” is now in theaters, and will hit VOD October 6. Find screening info here. 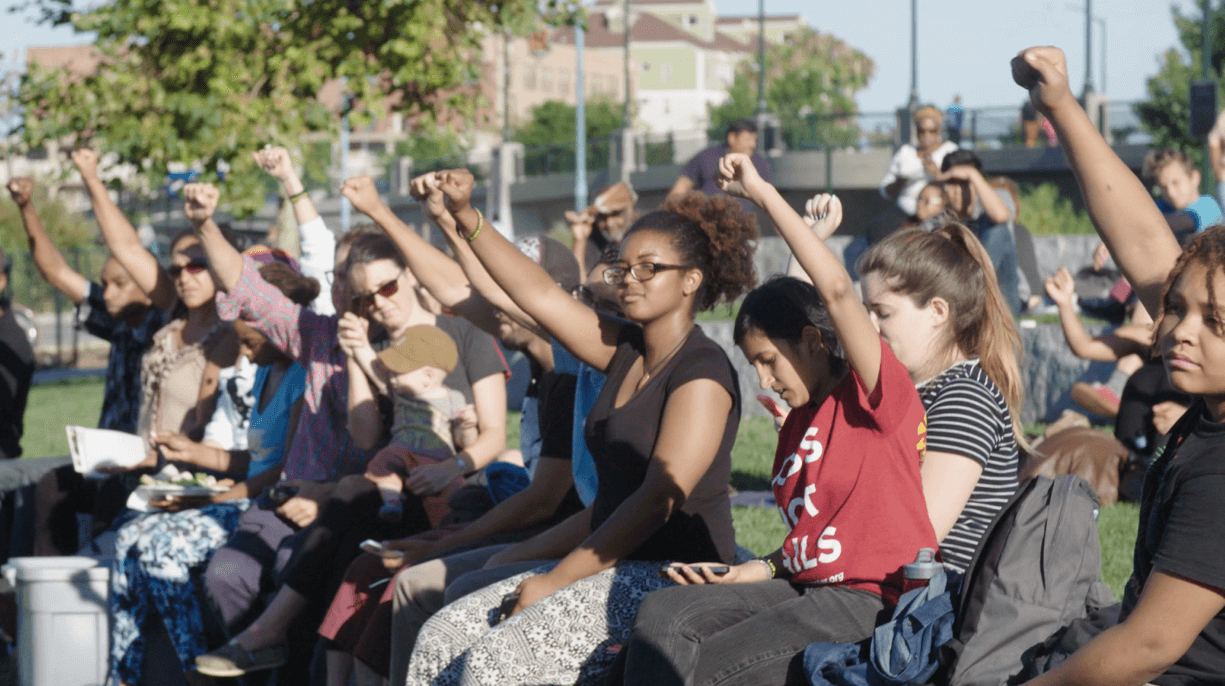 Burnt out educators, activists fighting for minimum wage in the restaurant industry, unemployed factory workers voting against their own best interests, single parents holding down four jobs to get by — Jennifer Siebel Newsom focuses on these people and more to expose “The Great American Lie” in her new documentary. The film looks at the wide, and growing, economic divide in the United States, and how it intersects with race, gender, education, politics, and more. The American Dream tells us anyone can do anything if they work hard and take responsibility for themselves — and it is just that, a dream. The reality is that our country is one enormous rigged game. What other conclusion can you draw when a government shirks its responsibilities — even those as basic as providing adequate healthcare and education – and shoves them onto the private sector? Sure, there are people who are doing just fine in this America, but most are not. To paraphrase one character in “The Great American Lie,” it’s really hard to pull yourself up by your bootstraps when you don’t have boots. (Rachel Montpelier)

“The Great American Lie” is now available on VOD.

The Lie – Written and Directed by Veena Sud 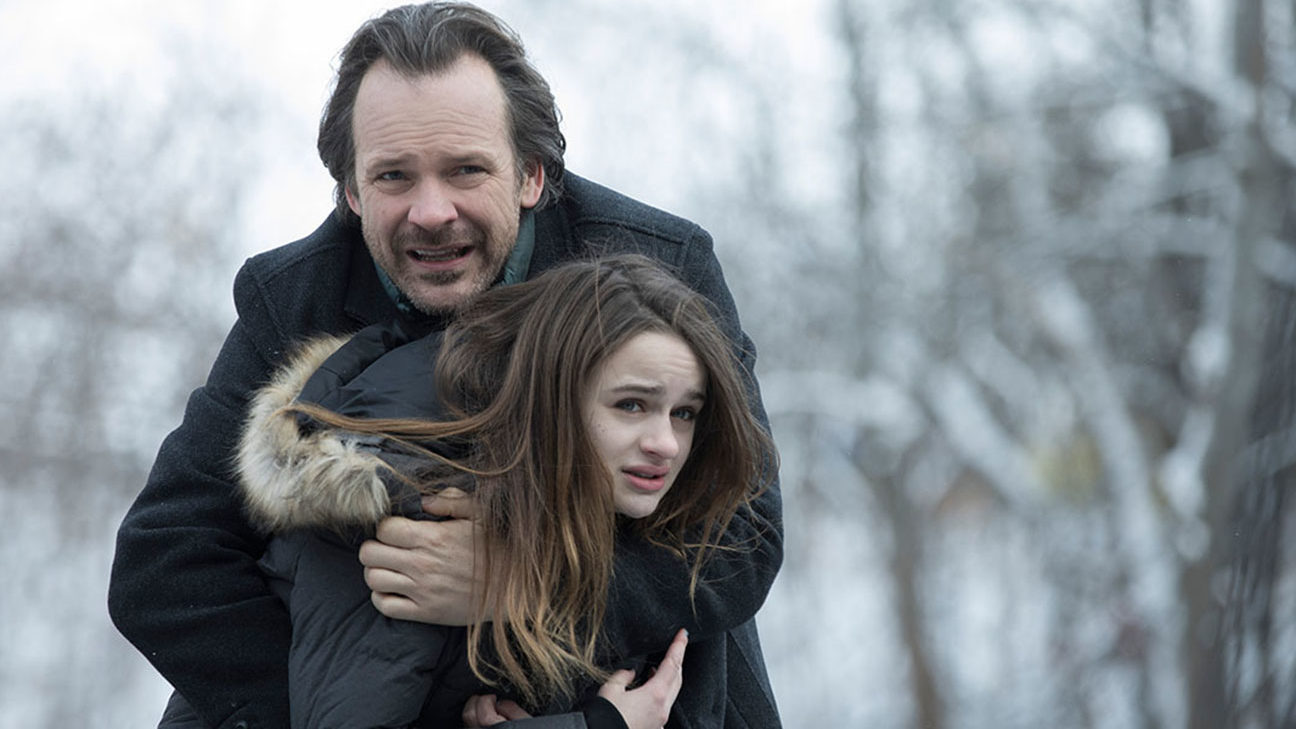 A divorced mother and father find themselves trapped in a living nightmare when their daughter confesses to murder in “The Lie,” a gripping psychological thriller about the lengths parents will go to in order to protect their child. While driving his 15-year-old daughter Kayla (Joey King) and her best friend Brittany (Devery Jacobs) to a weekend retreat in the dead of winter, aging rocker Jay (Peter Sarsgaard) pulls over to the side of the road for a quick bathroom break. Although the two girls enter the surrounding woods together, only Kayla returns. Terrified she could be tried as an adult, Jay and his ex-wife Rebecca (Mireille Enos) cover up Kayla’s crime with a web of lies and deceit. But the truth won’t stay buried, and as one mistake leads to another, the desperate parents discover that what actually happened in those icy woods is more shocking than they imagined.

“The Lie” will be available on Amazon Prime October 6.

An aging chef from Minnesota has his life turned upside down when a relentless filmmaker from Las Vegas tries to make the chef’s onion rings world famous.

“The Ringmaster” will be available on VOD October 6. Find screening info here.

“Yummy” will be available on VOD October 6.

A motley team of laborers travels from the North of France each year to harvest grapes at a small Champagne vineyard run by an eccentric winemaker with a cult following. Many of them have been picking these grapes for a quarter century, but as the winemaker begins to hand over the family business to his son — and younger workers increasingly join the team — it is unclear if this harvest tradition can endure. An immersive portrait of two disparate French worlds entwined, the film weaves intimate vérité scenes through the whirlwind labor of the harvest. 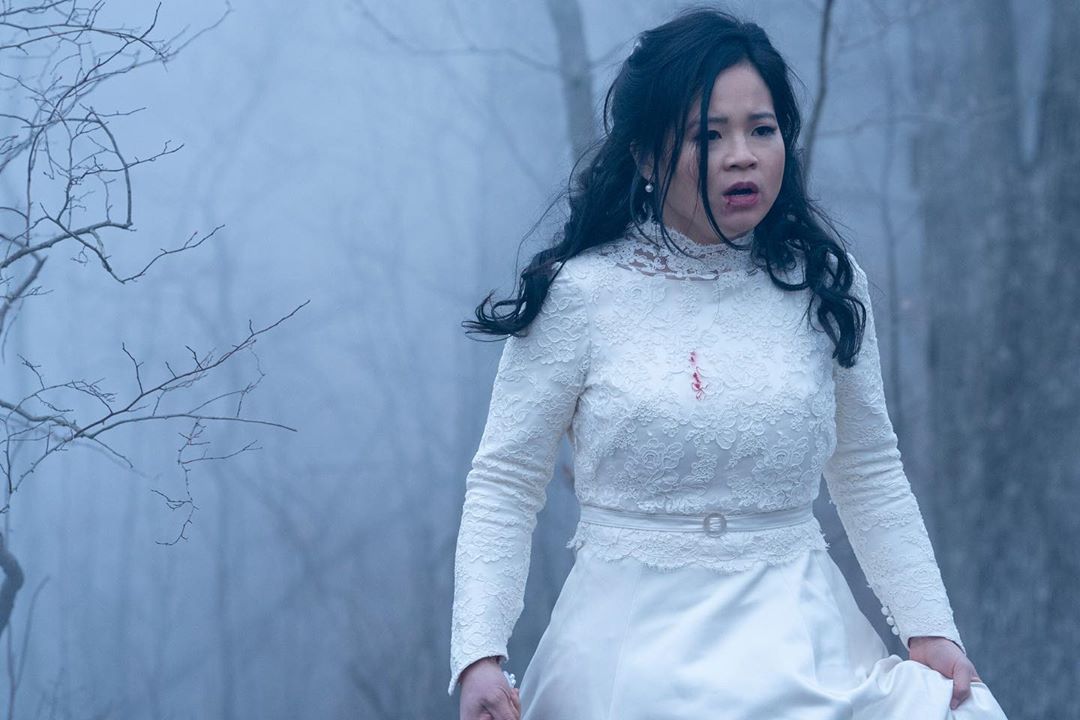 Encounters with mermaids, fallen angels, and other strange beasts drive broken people to desperate acts in “Monsterland,” an anthology series based on the collection of stories from Nathan Ballingrud’s “North American Lake Monsters.” 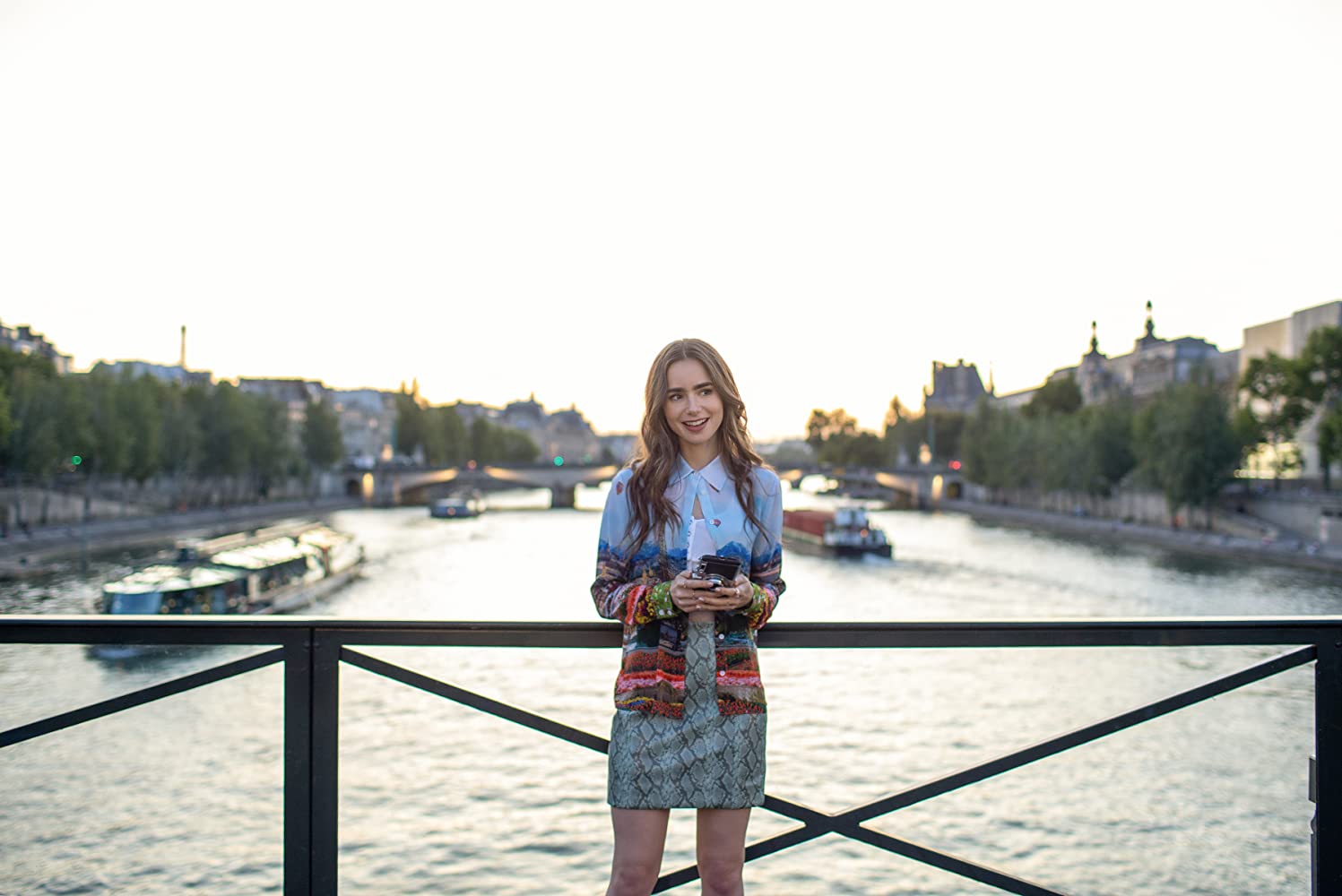 The lives of three siblings are disrupted when their recently widowed mother declares she’s in love with a new man. A tangled web of secrets, lies, rivalries, and betrayals eventually leads to a murder.

“Cocaine Prison” follows the lives of three indigenous Bolivians who work at the lowest levels of the cocaine trade. Two inmates of an overcrowded prison film their daily experiences, while one inmate’s sister must decide whether to traffic cocaine or become the first person in her family to pursue a college education. The film bridges the ever-widening gap between the North and the South and brings a new perspective to the War on Drugs being waged in the Andes.

“Tell Me More with Kelly Corrigan” is a series that inspires, educates, and entertains. Hosted by four-time New York Times bestselling author Kelly Corrigan, the show features insightful conversations with notable guests reflecting on their lives and the impact they can have on their worlds. 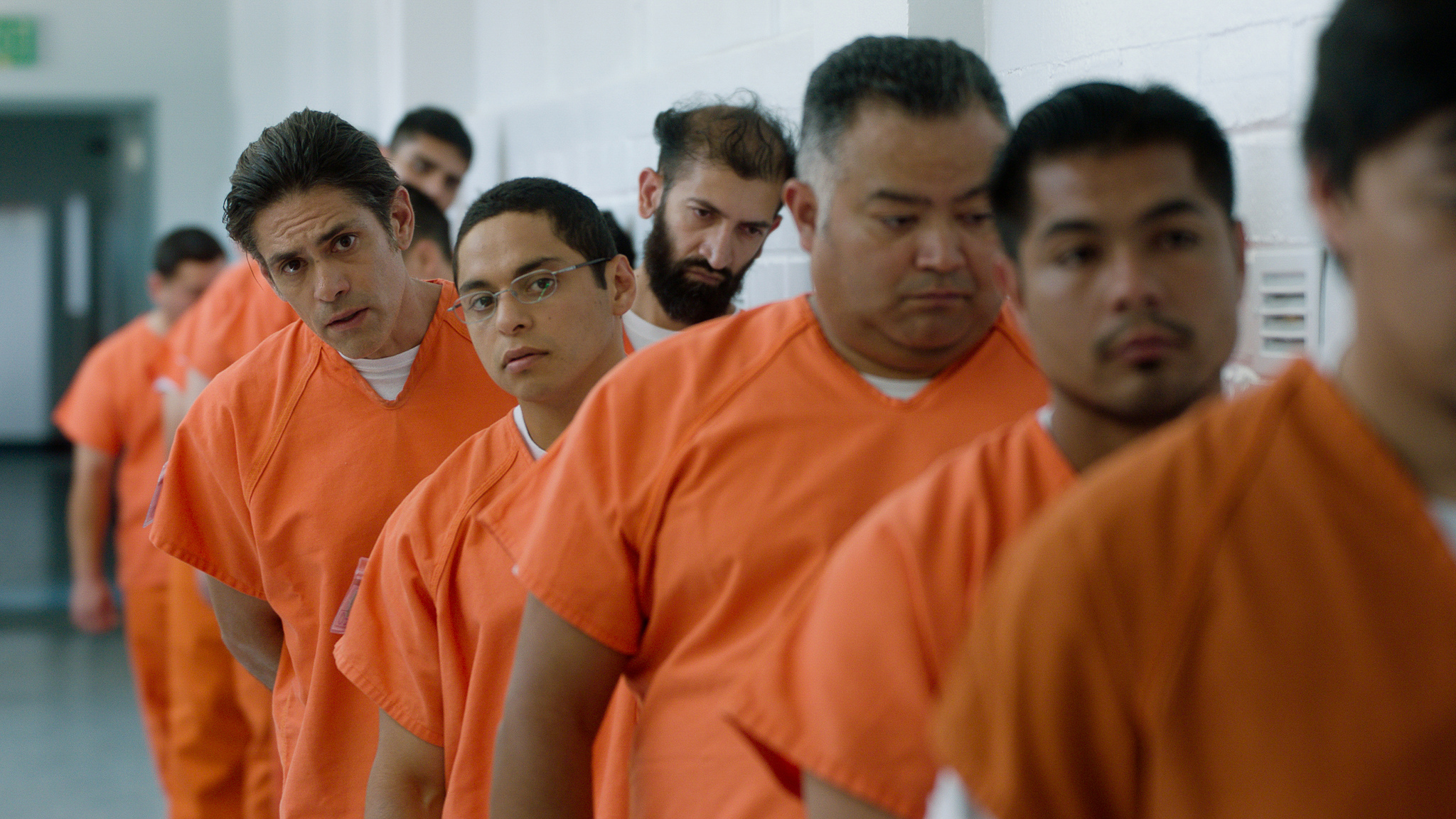 “The Infiltrators” is the true story of two young immigrants who get purposefully arrested by Border Patrol, and put in a shadowy for-profit detention center. The film follows Marco and Viri, members of a group of radical Dreamers who are on a mission to stop deportations. And the best place to stop deportations, they believe, is in detention.

Wild Card: The Downfall of a Radio Loudmouth (Documentary) – Directed by Marie McGovern and Martin Dunn (Premieres October 7 on HBO)

“Wild Card: The Downfall of a Radio Loudmouth” charts the rise and fall of prominent New York sports radio personality Craig Carton. Through a series of candid interviews with Carton, the film reveals how the radio host’s secret insatiable gambling addiction, financed by an illicit ticket-broking business, brought his career to a sudden halt when he was arrested by FBI agents and charged with conspiracy, wire fraud, and securities fraud in 2017. Carton was convicted and began serving a 42-month sentence in federal prison in June 2019. 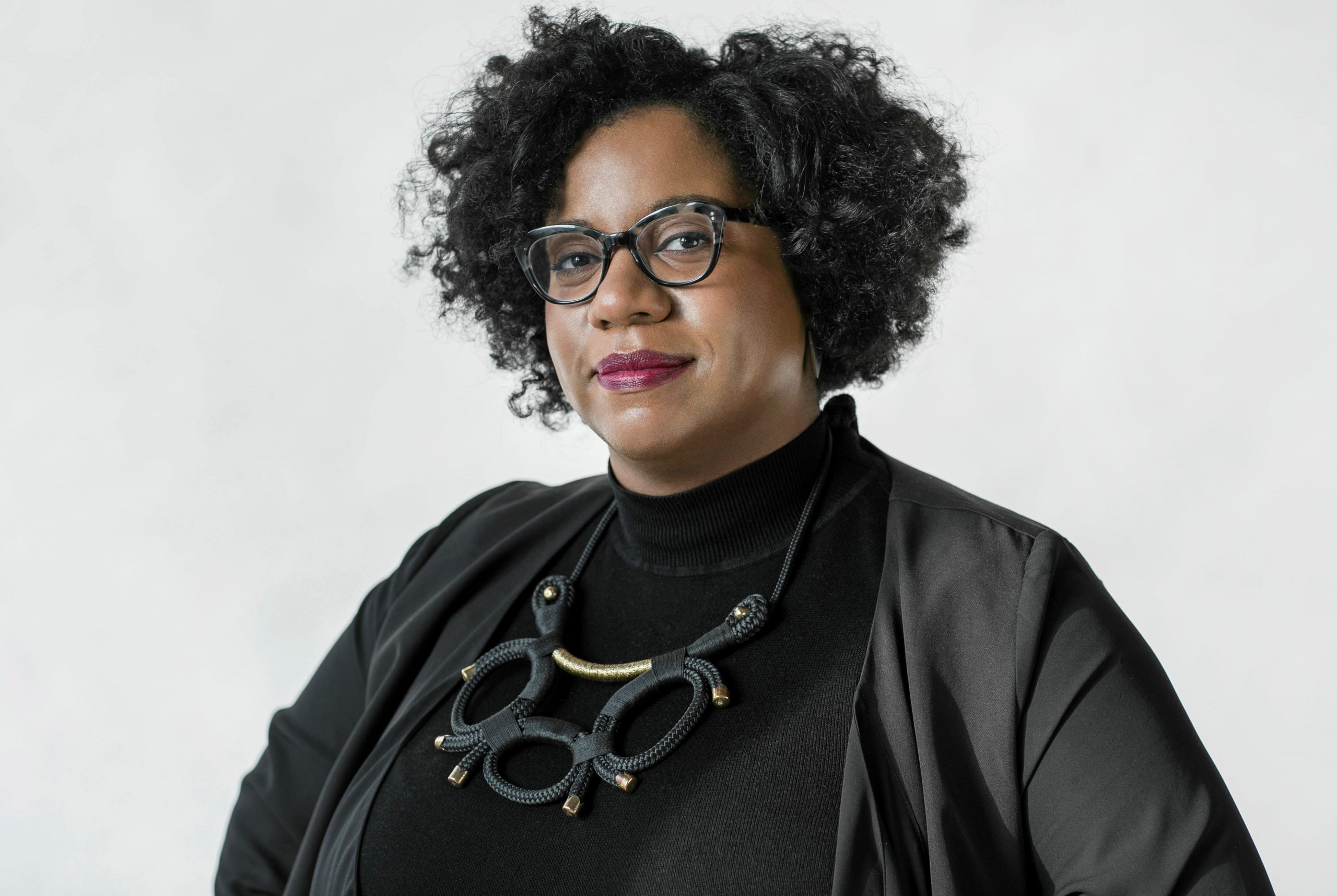