TreeNoote is a free and easy-to-use note taking program

We’ve reviewed simple note taking programs, and some very complex ones in the past. TreeNoote belongs to the former, and it is a freeware application. You can check out reviews of the note taking applications Elephant, QOwnNotes, Joplin, or tomboy-ng as well. 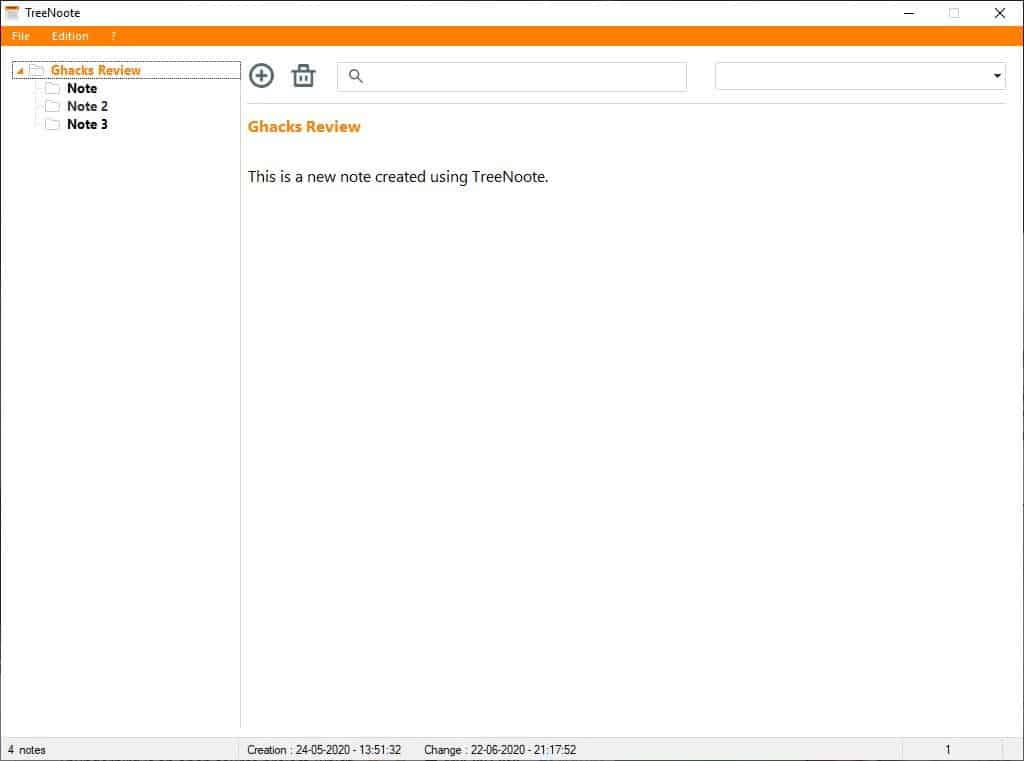 Yes, I know what you’re probably thinking, isn’t it Tree Note? It’s not a typo, it really is spelled TreeNoote.

The program is portable, run the TreeNote executable and it creates an INI in the same folder. The application has a two-pane interface, with a menu bar at the top, a sidebar on the left, which is called the TreeView. The right pane has a search bar and note menu at the top, and the note editor which makes for the rest of the screen space.

TreeNoote comes with an example notebook that explains some of the program’s features. The program is still in an early stage, this is v1.0, so  I won’t be too harsh to judge it. That being said, currently there isn’t a way to create a new notebook. But you can add new notes to the welcome notebook. Or you can delete its contents, and take it over as your primary notebook. That’s what I did.  Click on the + button at the top to create a new note, or the bin icon to delete a note. 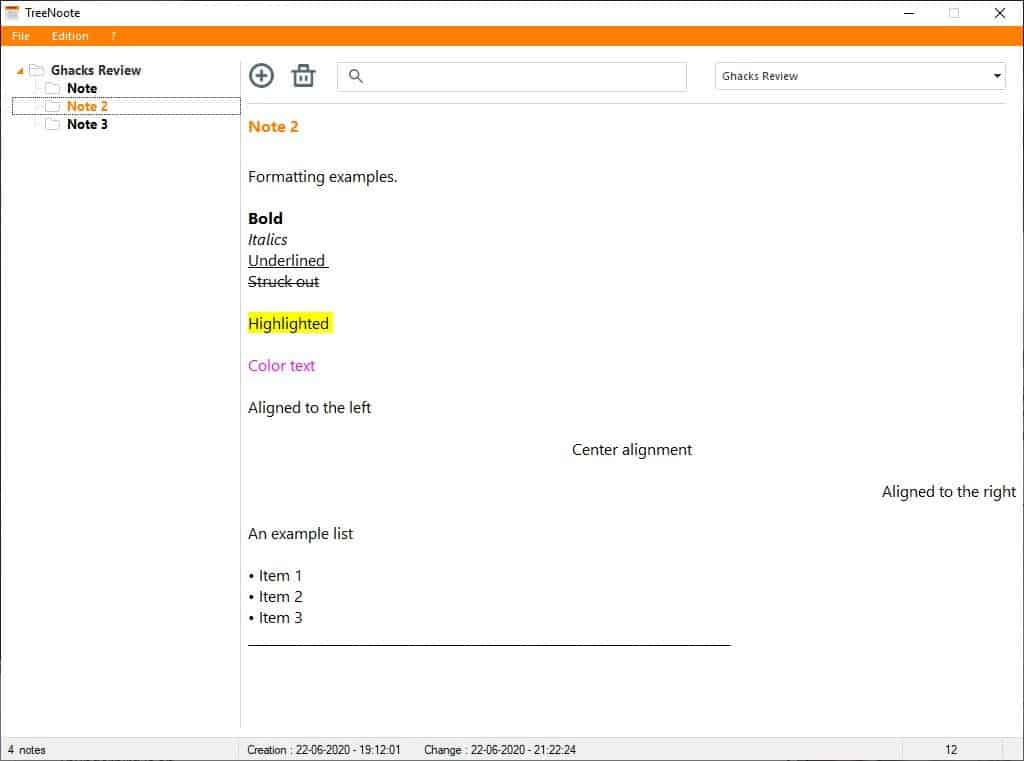 There is a title bar at the top of every note in the editor pane. This title is displayed as the note’s name in the left pane. Click inside the editor pane to begin writing your notes. There is no option to save the notes manually. Though the program’s page doesn’t mention this, TreeNoote supports auto-save, though it isn’t instant. I noticed that it autosaves whenever I switched notes, or exited the program.

The program does not have a right-click menu yet. Instead, you’ll need to use the editor’s toolbar for formatting the text. You may use it to change the font type, size, color, make text bold, italic, underline, strike-out, highlight, align text, add bulleted lists, lines. You can use the standard keyboard shortcuts (Ctrl + B, Ctrl + I, etc) for formatting text. The calendar button adds the current time and date at the cursor position, which is useful in case you’re using it like a journal.

TreeNote allows you to add URLs and images, you can either drag and drop them onto the interface, or paste them from the clipboard. 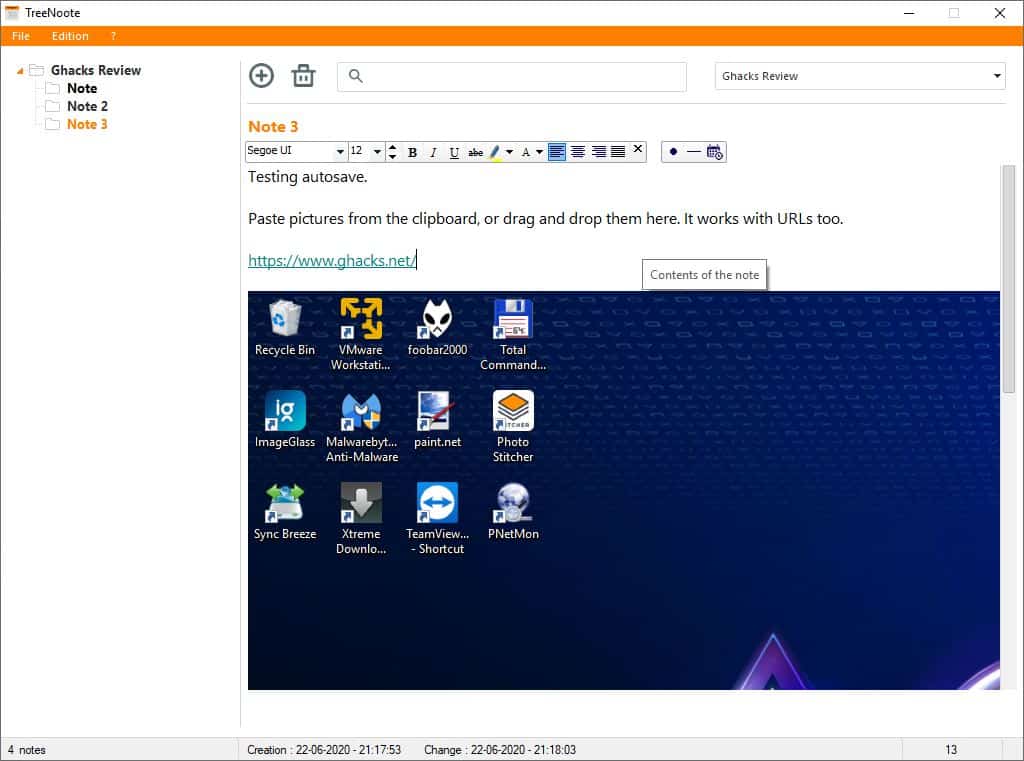 The search bar at the top of the window can be used to find text inside notes. It displays results in the pane. Use the menu in the top right corner to jump between notes.

The only other options that you can customize are the folder where the program stores its database, enable confirmation for deleting notes, and the language of the interface. There is an option to enable a password at launch (and after the program is inactive for a while). According to the developer, the password is saved in the RC5 Encrypted format. Don’t lose the password though, it’s impossible to recover it.

According to the developer, TreeNoote is headed soon to Linux, Mac, iOS and Android.

Note: The official download page requires an email id to which the link will be sent to. Use one of the mirrors to bypass that requirement.

TreeNoote is pretty usable in its current form and user-friendly. I’d like to see more options like creating different notebooks, rearranging the order of the notes, and maybe a to-do list.

Thank you for being a Ghacks reader. The post TreeNoote is a free and easy-to-use note taking program appeared first on gHacks Technology News.