On TikTok, the main #QAnon video channel has attracted over 80 million views, but on Friday, the channel produced no results. 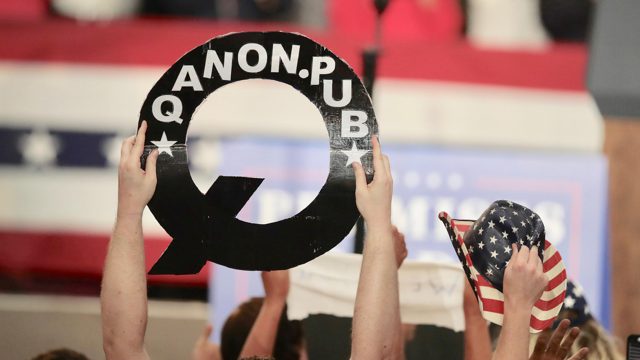 TikTok is starting to block searches for QAnon and other hashtags tied to the conspiracy theory.

The video-sharing app told the BBC it’s concerned the QAnon-related videos could spread misinformation. On TikTok, the main #QAnon video channel has attracted over 80 million views, but on Friday, the channel produced no results.

Another hashtag TikTok banned is “WWG1WGA,” a slogan QAnon supporters use that means “Where we go one, we go all.” According to Google, the page for the hashtag had tallied over 101.5 million views before it was scrubbed of all content. The hashtag “FallCabal,” which refers to a QAnon documentary, has been blocked as well. announced it would prevent QAnon-related content from appearing in the search, recommendation, and trending functions over concerns supporters of the conspiracy theory are causing real-world harm.

QAnon devotees believe President Trump is waging a secret war to stop the “Deep State,” a hidden faction within the US government. The same theory also baselessly claims numerous government officials and celebrities are part of a clandestine child sex trafficking ring. Earlier this month, QAnon supporters made the bizarre claim that furniture provider Wayfair is also involved in the sex trafficking. The evidence? The company’s cabinets and pillows are too expensive, and thus must be a ruse to sell kidnapped children.

Wayfair says there’s no truth to the child sex trafficking accusations. Still, the theory went viral, and ended up flooding a national hotline for human trafficking with phone calls.

Although both Twitter and TikTok are trying to crack down on the conspiracy theory, it may be difficult to suppress mention of QAnon, which is gaining support among Republican politicians. On TikTok, other hashtags tied to the conspiracy theory also remained unblocked. In addition, popular QAnon groups and hashtags continue to remain active on Facebook and Instagram.

The Best Online Collaboration Software for 2021

Resident Evil Village Launches May 7 on PC and Consoles