The president is a danger to the US military 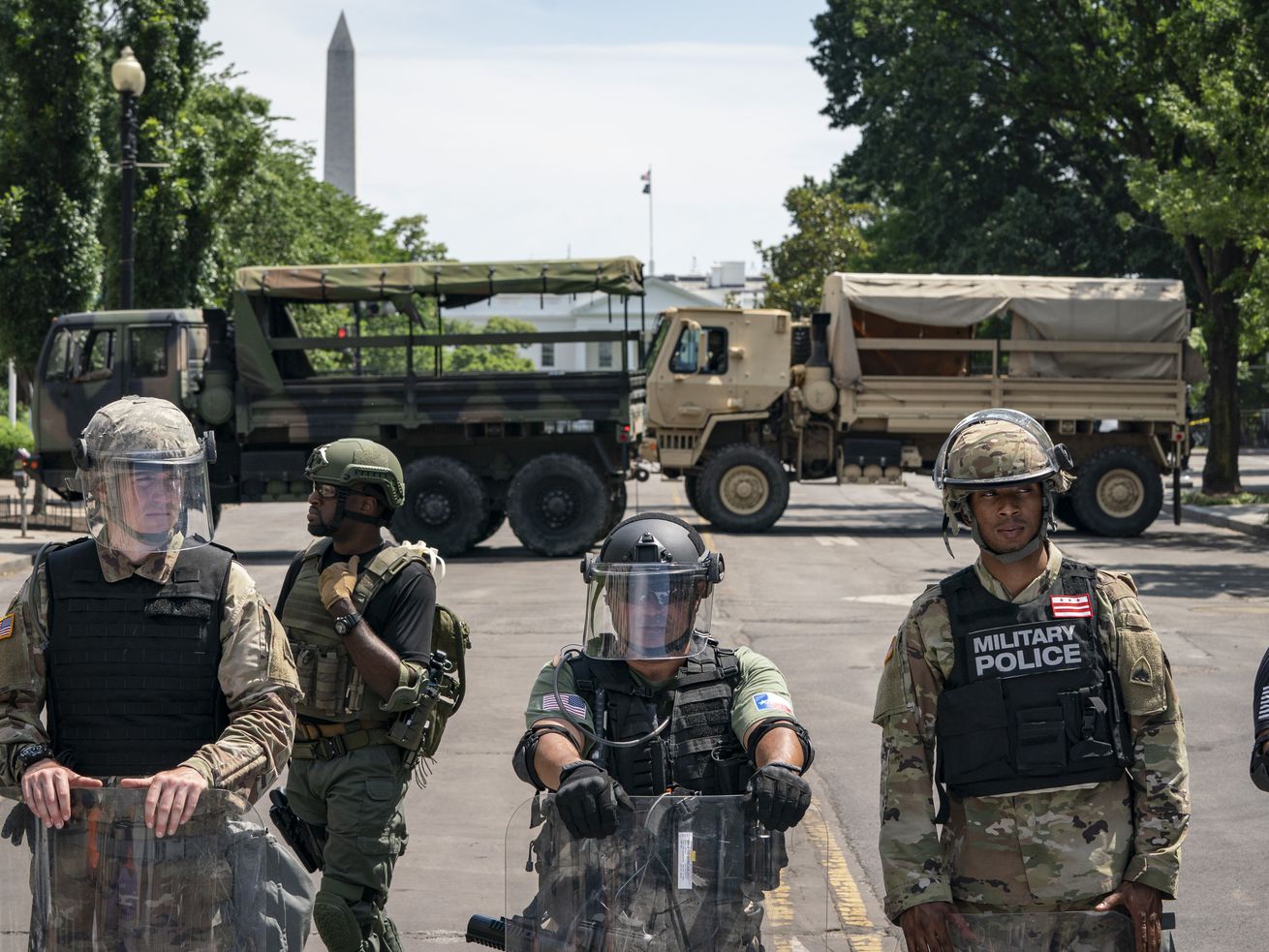 When President Donald Trump looks at the military he leads, he doesn’t see a diverse group of Americans doing their jobs to protect and defend the country. He sees a massive force at his disposal solely to satisfy his personal and political whims — even if it means tarnishing the reputation of the institution he claims to love.

Since protests sparked by the death of George Floyd at the hands of Minnesota police last week, the president has failed — or, more accurately, refused — to heal the nation. Larger and larger demonstrations sprang up in every American state and many cities, most dramatically outside the White House. Last Friday, Trump’s security detail rushed him to the mansion’s bunker for safety despite no immediate threat, prompting Trump to bristle that he looked weak in a crisis.

In response, Trump reached for the military to bolster his image and ego, brandishing force to quash the violence and looting accompanying peaceful protests against police brutality. To do so, he’s pushed for out-of-state National Guard members to patrol the streets of Washington, DC, against the mayor’s will; deployed 1,600 active-duty troops on the capital’s doorstep; and threatened to send more forces around the country to arrest vandals.

That’s perhaps no surprise, as he tweeted on Monday that Republican Sen. Tom Cotton was “100% Correct” for suggesting violent activists would cower before a US Army presence.

Trump, in essence, sees the military as his personal plaything, little toy soldiers to move around on the map of America. Granted, it’s his right to do so as the commander in chief, and he has yet to order the military to do anything illegal.

But just because he can deploy hundreds of troops to curb protests doesn’t mean he should, current and former troops say.

“As a veteran of the Iraq and Afghanistan wars, it’s been heartbreaking to see President Trump using the military to intimidate protesters and inflame tensions,” Paul Scharre, a former soldier and Pentagon official now at the Center for a New American Security think tank in Washington, told me. “The military exists to protect America against its enemies, which are not our own people.”

Should Trump follow through with employing active-duty troops in his protest response, some contend relations between Americans and their military could drop to a Vietnam-era low. “I’m worried about it really doing serious damage to the reputation of the military,” Michigan Rep. Elissa Slotkin, a House Armed Services Committee member and former top Pentagon official, told me.

Trump’s actions are understandable in one sense: Polls show most Americans support using the military to help police control the protests. But Trump’s show of force has turned the military into more of a political tool than a policing one.

On Monday, as law enforcement outside the White House cleared a group of protesters with tear gas and pepper balls just so the president could later walk to a nearby church and pose for photos holding a Bible, Trump threatened to send active-duty military around the country to stop rioters.

“If a city or state refuses to take the actions that are necessary to defend the life and property of their residents, then I will deploy United States military and quickly solve the problem for them,” Trump said in a short speech delivered from the White House Rose Garden.

He has the authority to do that using the Insurrection Act of 1807 which, when invoked, allows the president to deploy the military to put down civil unrest.

The law has been used several times before, most recently in 1992 when California’s governor requested the US military’s help to stop riots in Los Angeles. The irony, though, is most presidents have invoked the law to uphold civil rights, not work against them.

For example, in 1957, then-Arkansas Gov. Orval Faubus refused to follow federal integration laws after the Supreme Court’s Brown v. Board of Education ruling three years earlier. As a result, President Dwight Eisenhower sent soldiers from the 101st Airborne Division into Little Rock to escort nine black high school students into the all-white Central High School despite protests against them.

Even so, using the law is still seen as immensely controversial. After all, it’s the president brushing aside both state laws and the authorities of governors. As the Naval War College’s Lindsay Cohn told me, President George W. Bush made an offhand comment in 2005 about using federal forces to quarantine regions of the country suffering from avian flu. In response, “Everyone lost their minds,” she said.

In this case, Trump has gone much further than Bush did, publicly floating multiple deployments of American military power to subdue activists. Such a consideration could only come from someone with no appreciation for using armed forces as intended.

“The president is trying to turn the American military against American citizens who are peacefully protesting on domestic soil,” Virginia Sen. Tim Kaine, a member of the Senate Armed Services Committee, said in a Tuesday statement announcing a proposed amendment to prohibit the use of military force against peaceful protests. “This is not what the United States military is for.”

But that’s not all. Esper, with Trump’s support, requested for states by Tuesday to send hundreds of their National Guard personnel to perform law enforcement functions in Washington, DC, which already had about 1,300 activated members in the district. Those requests, which were denied by some governors and accepted by others, were made over the objections of DC Mayor Muriel Bowser.

“We don’t want the armed National Guard, armed military, and we don’t want any of those things on DC streets,” she told reporters this week. But she couldn’t stop the federal government from requesting such support because she isn’t a governor. That means Trump and his team have essentially unfettered authority to build up a National Guard presence in the city, despite Bowser’s wishes.

It’s unclear whether DC’s police forces even needed the extra assistance. But what is clear is that the Trump administration’s decision led to stunning scenes on Tuesday of National Guard members standing sentinel at the Lincoln Memorial to keep demonstrators out.

Your Lincoln Memorial this evening. pic.twitter.com/QByGgWeDDm

That was hard for many US military experts, like the American Enterprise Institute’s Kori Schake, to see. “It broke my heart to see military posted so aggressively at the Lincoln Memorial, a sacred place of racial protest in our country,” she told me. “This militarization of response to protests will taint public attitudes in ways so damaging to the institution of the military.”

“The president is trying to associate our military with his dangerous policies,” she continued.

Even James Mattis, Trump’s former secretary of defense, blasted Trump for his actions in and toward the capital.

“Militarizing our response, as we witnessed in Washington, DC, sets up a conflict — a false conflict — between the military and civilian society. It erodes the moral ground that ensures a trusted bond between men and women in uniform and the society they are sworn to protect, and of which they themselves are a part,” he wrote in the Atlantic on Wednesday, breaking a years-long silence on the president’s conduct. “Keeping public order rests with civilian state and local leaders who best understand their communities and are answerable to them.”

Setting aside whether or not Washington needed such support — and, per Mayor Bowser, it didn’t — such a move reminded some experts of what the US military does ahead of invading a foreign city.

“That’s exactly what this looks like,” Van Jackson, a former Pentagon official now at the Victoria University of Wellington in New Zealand, told me. This is “how you prepare a battle space before you launch an invasion and occupation. It’s actual, no-shit war.”

It also worried others. “As a former active duty infantry soldier, I’m deeply disturbed by reports that the Pentagon has moved an active duty infantry unit to the national capital region,” CNAS’s Scharre said. “Deploying an active-duty combat unit to an American city would be dangerous and unwarranted.”

The administration seems committed to keeping them around. The Associated Press reported on Wednesday — less than 24 hours after the Pentagon’s announcement — that some of the active-duty troops had already started to return to their home bases. But just hours later Esper reversed that decision, forcing them to stay nearby.

That the administration — namely, Trump — would even risk the optics of sending an invading force outside the nation’s power center shows he’d prefer to play war than deftly manage America’s military.

“He doesn’t seem to see a problem breaking with American norms and very cavalierly using active-duty forces in American cities,” Rep. Slotkin told me. “The fact that he doesn’t see a problem with it scares me more than anything.”

The Pentagon isn’t blameless during all this. During Monday’s photo op, Esper and Army Gen. Mark Milley, chair of the Joints Chiefs of Staff, outfitted in his battle dress uniform, trailed Trump on the walk to the church.

Esper actually ended up standing next to the president and other top administration officials during the stunt, placing the nation’s top defense chief smack in the middle of a political moment. That was just hours after he labeled American cities a “battle space” during a call alongside Trump with state governors.

“I was not aware a photo op was happening”@EsperDoD right now.

Photo from the op he was not aware of. pic.twitter.com/ABZC6aYwGK

Milley was also found walking Washington’s streets on Monday to check in on National Guard members as if he were some wartime commander. But he’s not. As Trump’s top military adviser, he isn’t in the chain of command and has no direct responsibility for the forces out in the city.

“These are images we cringe at in places like Hong Kong and Venezuela,” a former US Navy officer told me on the condition of anonymity to speak on a sensitive subject. “We are supposed to be more measured, more responsible than this.”

General Milley, chairman of the joint chiefs of staff, walking the streets of Washington DC right now. Briefly spoke to say he is observing the situation. pic.twitter.com/fHcYOTYMzN

But Trump, as commander in chief, is ultimately responsible for what he does with the nation’s military. It’s clearly being misused — mainly to soothe the president’s fragile ego — and this falls squarely on his shoulders.

Every day at Vox, we aim to answer your most important questions and provide you, and our audience around the world, with information that has the power to save lives. Our mission has never been more vital than it is in this moment: to empower you through understanding. Vox’s work is reaching more people than ever, but our distinctive brand of explanatory journalism takes resources — particularly during a pandemic and an economic downturn. Your financial contribution will not constitute a donation, but it will enable our staff to continue to offer free articles, videos, and podcasts at the quality and volume that this moment requires. Please consider making a contribution to Vox today.

The Alternate Reality of Fringe Apps

Try out Little Nightmares 2 for free on PS4, Xbox One and Nintendo Switch

The future of making stuff: Inside the evolution of 3D printing with Formlabs