TechX Awards: The Most Innovative Products and Technologies of CES 2021

CES 2021 gave PCMag editors their first chance to vet candidates for our new Technical Excellence Awards, aka TechX. The award is given to products, concepts, and services we think are going to be game changers in their respective markets. CES has always been a proving ground for new concepts, and even without a trade show floor this year, there were plenty of innovations to be found. Although there were fewer official exhibitors than usual—less than half by some accounts—the vendors that showed up (albeit virtually) came to play.

We found desktops with new form factors, slim, powerful laptops with clever external GPUs, refrigerators that use UV light to purify water, just to name a few. AMD continued its assault on Intel chip hegemony, and Nvidia strengthened its position in the graphics market. Of course, there were plenty of cool new variations in display technology as well—particularly in the form of LG’s rollable smartphone. When (or if) some of these innovations will actually hit the market is hard to say, but they’re undoubtedly pushing the industry forward.

PCMag’s TechX awards may be launching at CES, but we’ll continue to give them out throughout the year. After all, innovation doesn’t stop when the show ends. If you want to submit a product for TechX consideration, here’s how to reach our editors with a nomination.—Dan Costa 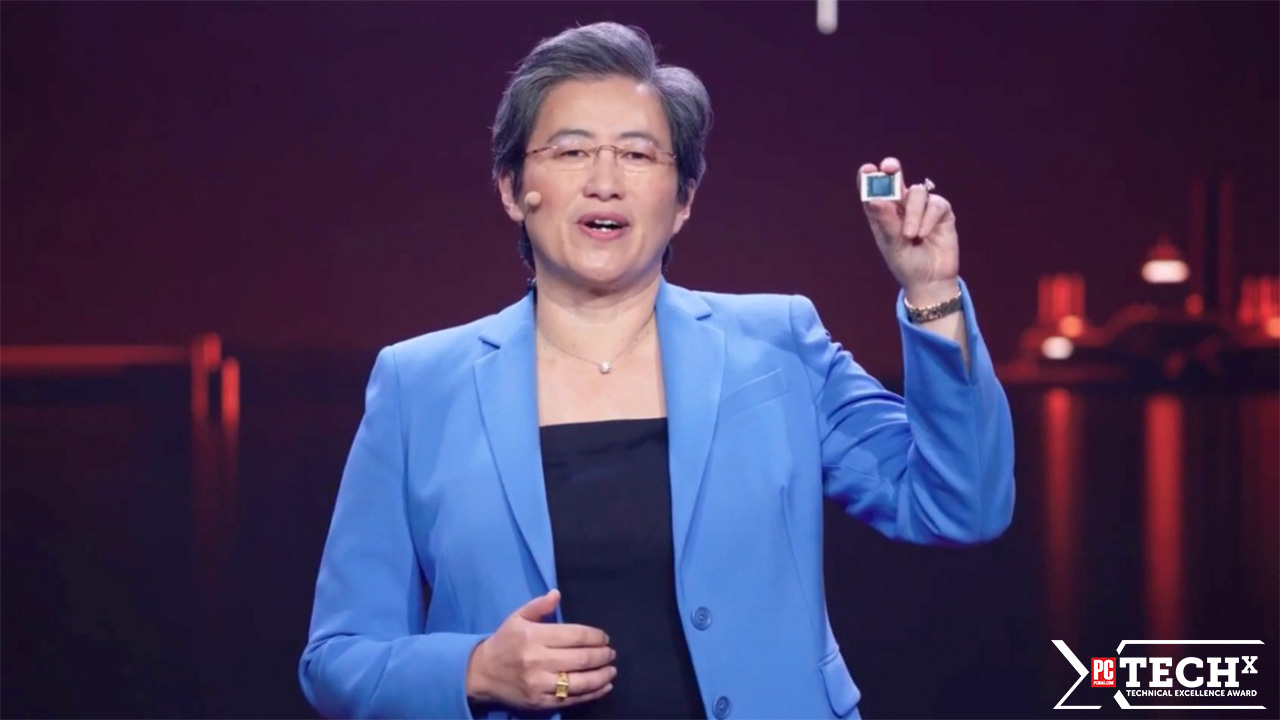 13 new chip variants that will join the Ryzen 5000 series this year to power laptops of all types: U-series chips for thin-and-light laptops, and HX-, HS-, and H-series chips for more power-minded models.

Among them is a new flagship processor for thin laptops, the Ryzen 7 5800U, which has eight cores and 16 threads, making it the first eight-core chip for slim machines. AMD says it posts a 7% to 44% performance increase against Intel’s competing “Tiger Lake” Core i7-1185G7 chip. Meanwhile, the new Ryzen 9 5980HX has a 4.8GHz boost clock speed and is intended for beefy, powerful gaming laptops. AMD expects that more than 150 laptop models will feature Ryzen 5000 chips, up 50% from the last-generation Ryzen 4000 family. With this new line, Intel’s domination of the mobile CPU space comes under fire.—Tom Brant 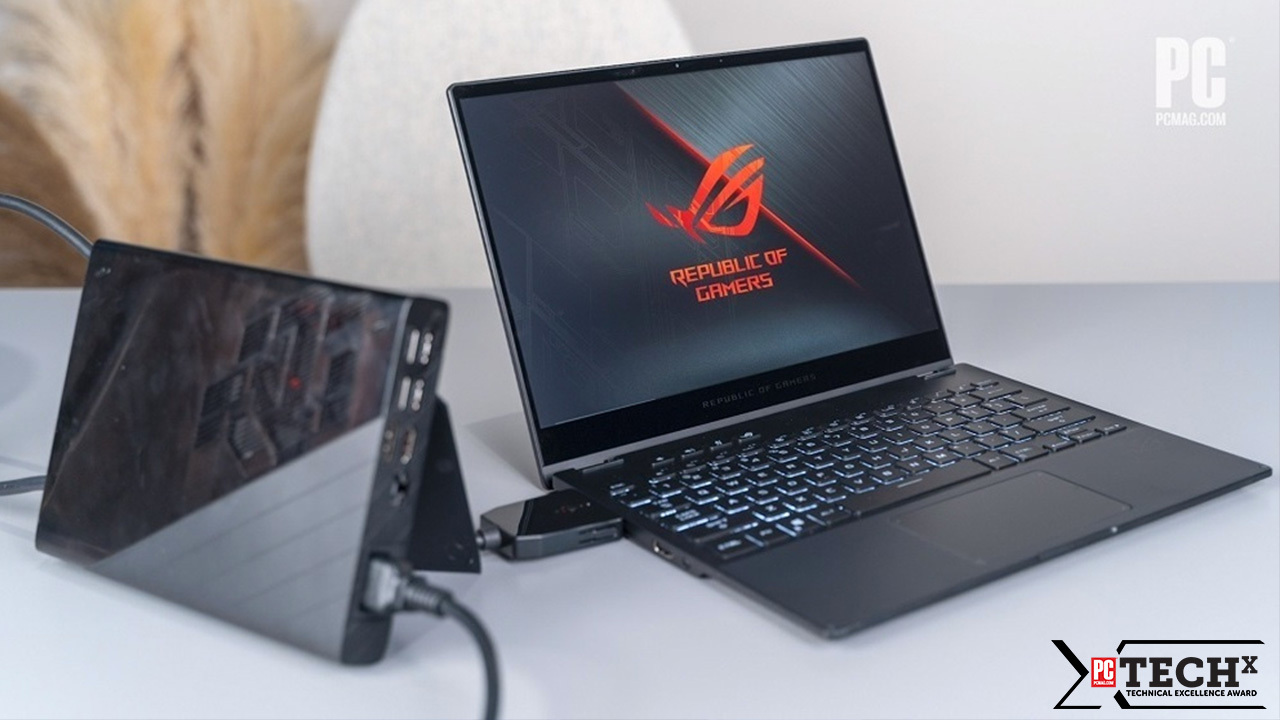 ROG Flow X13 laptop and XG Mobile eGPU are taking the concept further. eGPUs are traditionally much larger than laptops (they’re usually as big as the desktop-style graphics cards they hold), meaning you’re forced to leave them on your desk and only connect your laptop for boosted graphics performance at home. The XG Mobile, conversely, is itself super-portable, at just 1.1 by 6.1 by 8.1 inches (HWD), but can still contain up to a GeForce RTX 3080 GPU.

The Flow X13 laptop, meanwhile, is a 13-inch 2-in-1 convertible—already unheard of in the gaming space—maxing out at just an entry-level GeForce GTX 1650 GPU, leaving you short of top-level gaming power. When paired with such a portable eGPU, though, the system becomes a fully powered mobile gaming setup, making the Flow X13 more capable for gaming while maintaining a portable and flexible laptop for travel and other uses.

Then there’s the special cable connection between the eGPU and the laptop. Asus’ proprietary port and connector will hopefully mitigate performance loss over the connection compared with Thunderbolt eGPU solutions, maximizing your frame rates. This one-two punch can change how we think about eGPUs, and potentially make more light laptops truly gaming-capable, with this trailblazer leading the way.—Matthew Buzzi 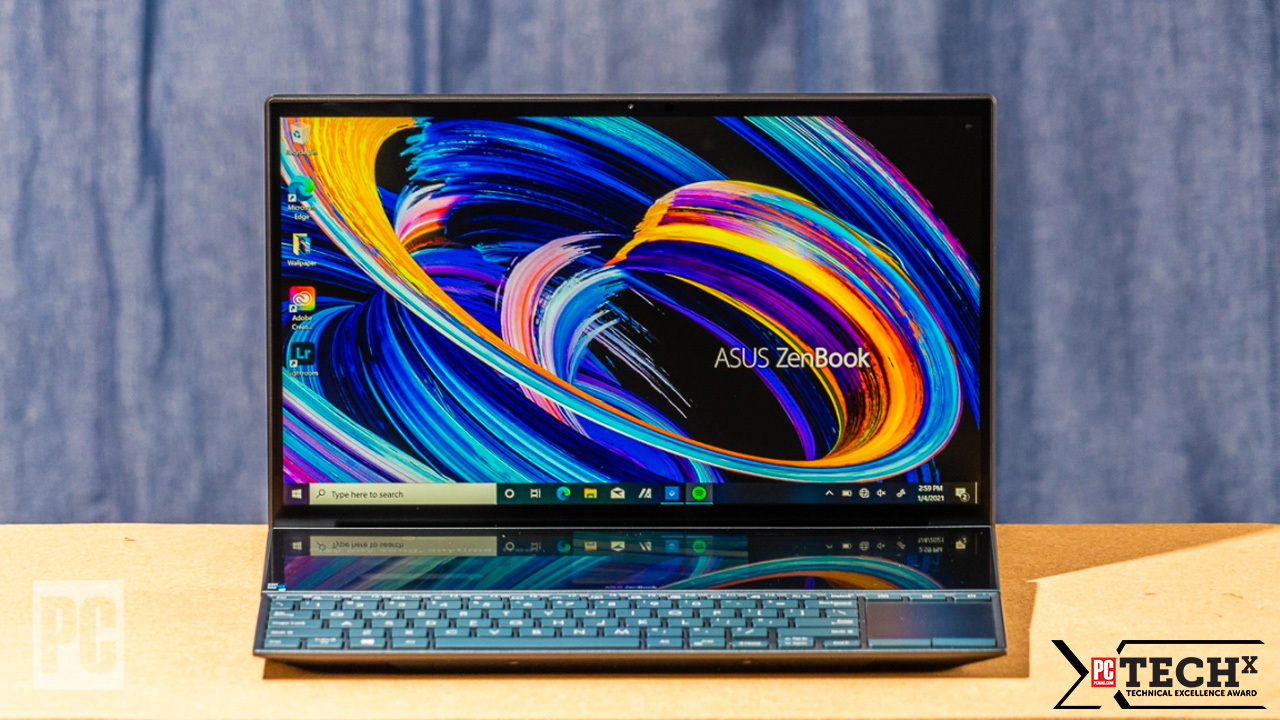 ZenBook Duo 14 isn’t the first dual-screen laptop, or even the first 14-inch ZenBook Duo. But that doesn’t make it any less impressive. Asus is building on this future-is-now laptop’s twin-display foundation with newer components, improved features, and a slimmer chassis than before. There’s no denying that this machine is simply cool, and it’s impressively compact at 0.7 by 12.7 by 8.7 inches and 3.5 pounds.

Compared with the original, the 2021 model is trimmer, the screens are brighter, and the second (ScreenPad Plus) display is more advanced. The smaller touch screen includes customizable hotkeys in its launcher to make it more accessible, including shortcuts, quick settings, screen swap, handwriting mode, and more. A major inclusion here is a customizable software ScreenPad control panel for the most popular Adobe software, helping you improve your workflow with a persistent menu of shortcuts and tools to tap quickly.

A second screen isn’t essential, exactly, but as with a second desktop monitor, it can amp up your productivity. This is certainly the best twin-screen implementation we’ve seen on a laptop this small, on both a functional and aesthetic level, and a model for others to follow.—MB 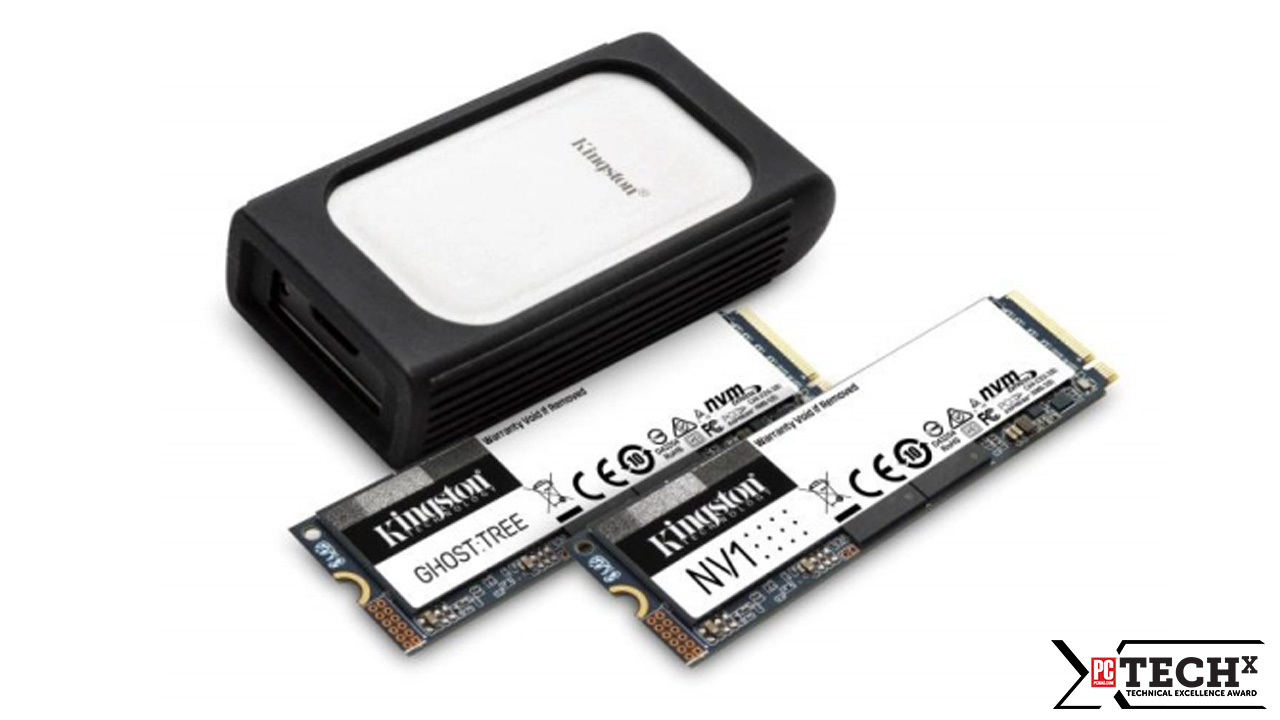 “Ghost Tree” SSD just yet, what we have seen is killer: It promises new peak raw-speed limits in the world of consumer PCI Express NVMe drives. Kingston says Ghost Tree is capable of hitting up to 7,000MBps in real-world read and write scenarios, a new all-time record (if it bears out in testing, of course). Ghost Tree is an M.2 drive that works on the PCI Express 4.0 bus, which means you’ll need a very late-model AMD AM4 or spanking-new Intel LGA1200 motherboard that supports the 4.0 spec to take advantage of the peak speeds.

Kingston notes that Ghost Tree SSDs should launch at capacities of 1TB to 4TB, allowing for a range of needs in a boot or secondary drive. Now, the real test of an SSD in the minds of many productivity-minded users and gamers are the 4K random read/write speeds, rather than theoretical max sequential speeds, but we’ll just have to see how Ghost Tree performs once we get a chance to put it through its paces at PC Labs. Early claims make it look like a pace-setter, though.—Chris Stobing 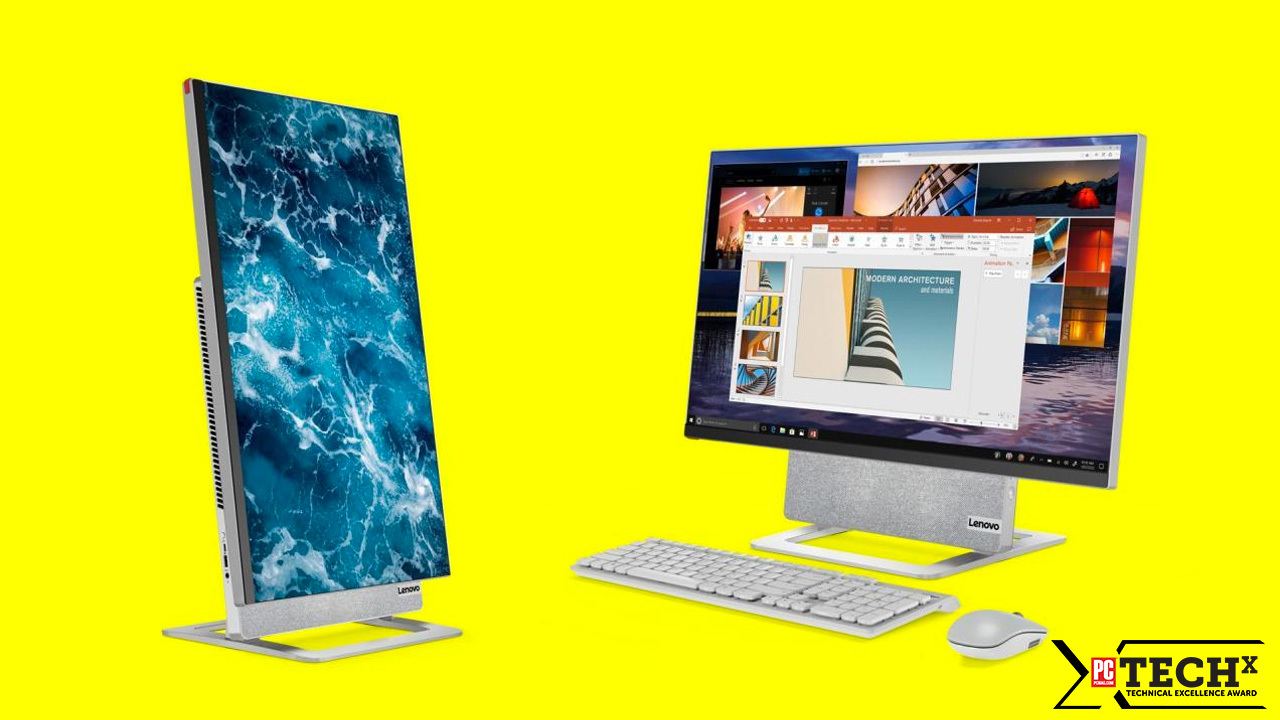 Yoga AIO 7 with the push of a finger. Once the monitor changes into a vertical orientation, your desktop screen automatically adapts to fit the new display format.

The display has a crisp 4K resolution and can show 99% of the DCI-P3 color gamut. Inside, the desktop can be configured with up to AMD’s Ryzen 7 4800H processor and an Nvidia GeForce RTX 2060 GPU. Lenovo plans on selling the all-in-one in the US later this year, with configurations starting at $1,599. In a category that seldom sees much in the way of innovation, the Yoga AIO 7 is the first rethink of the AIO desktop in some time.—TB 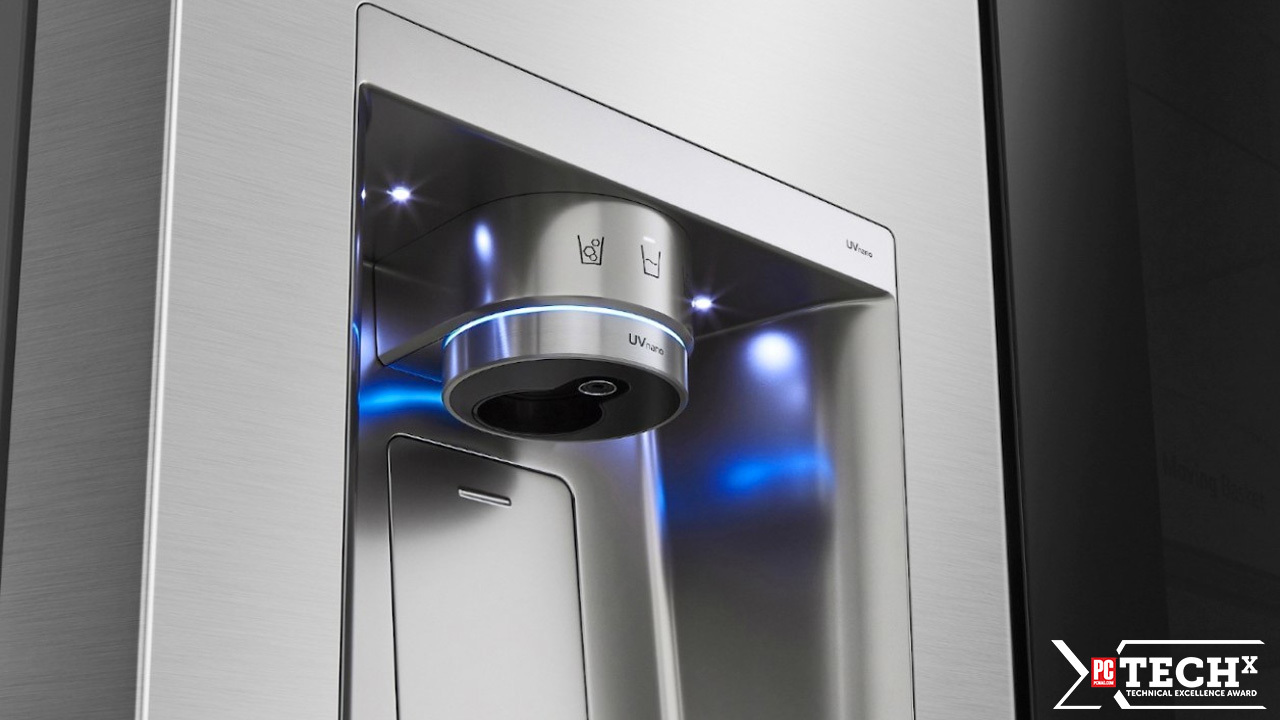 InstaView Door-in-Door Side-by-Side Refrigerator With UVnano uses ultraviolet LED light to “virtually eliminate” bacteria on the nozzle. LG says its UVnano technology operates once every hour to remove “up to 99.9 percent of bacteria” such as E. coli, staph, and pseudomonas aeruginosa (which can cause pneumonia) on the refrigerator’s dispenser tap.

It’s unclear whether the technology is effective against COVID-19, but it still offers greater peace of mind that the water from your refrigerator is safe to drink. LG said it plans to announce pricing and availability details in the coming months.—Angela Moscaritolo 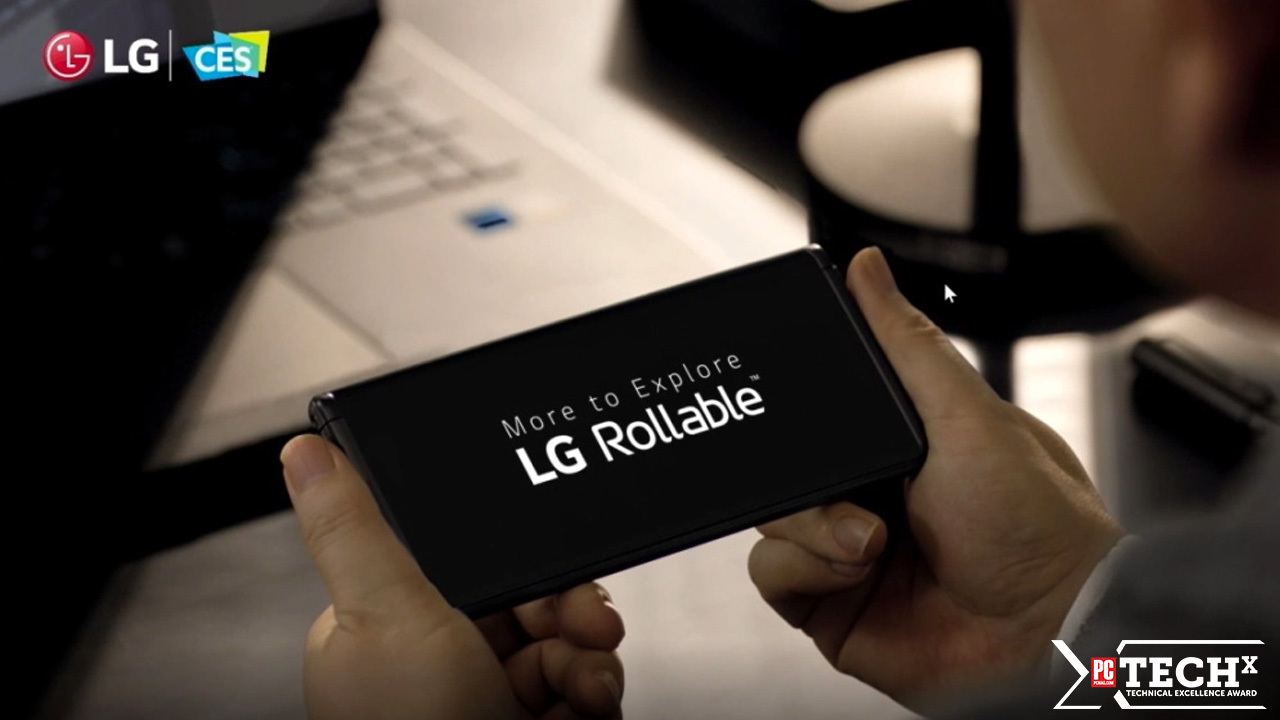 LG Rollable. No, it doesn’t roll up into a tube; rather, it starts out as a standard-sized phone, and then the screen appears to s-t-r-e-t-c-h into becoming a tablet.

TCL has shown a similar concept, but LG’s is much closer to market—we’ve heard it may appear on shelves as soon as March. As LG is still the third-most-popular phone maker in the US, that sets up a battle between the Rollable and Samsung’s various folding models.—Sascha Segan 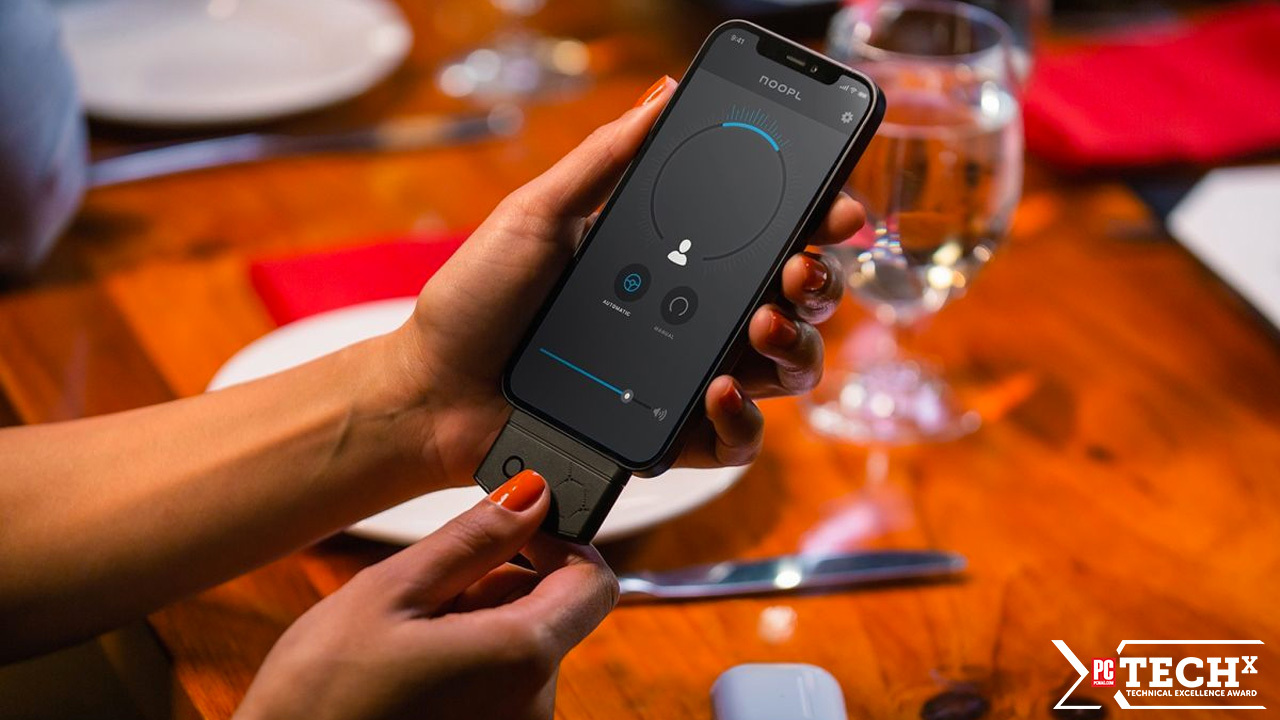 AirPods Pro to give you directionally assisted hearing, cutting through background noise to give you clearer sound from someone sitting across a table in a noisy restaurant, or a friend in a crowd. At $199, this could seriously reduce the instances of “what did you say?” once we get together again.—SS 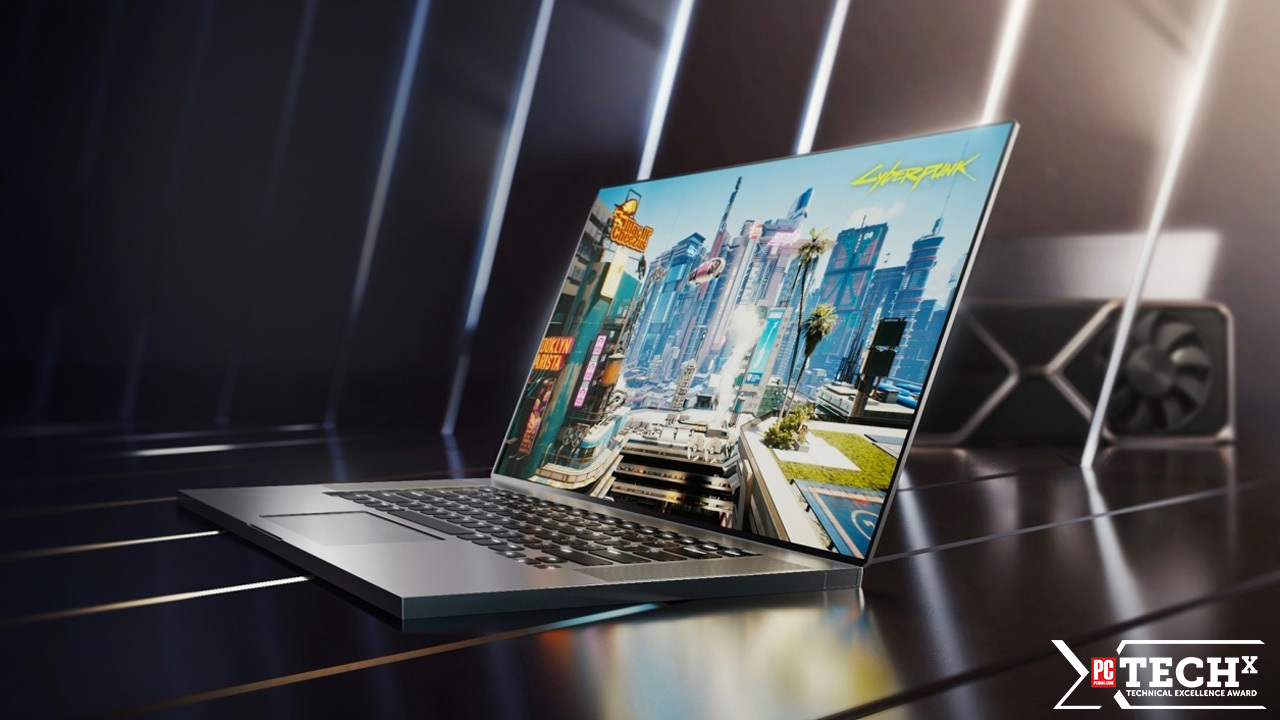 the announcement of the $329 GeForce RTX 3060 in desktop-card form.

Now the company is filling out the mobile segment, with the launch of over 70 laptops with GeForce RTX 30-Series “Ampere”-architecture mobile GPUs inside. Nvidia says the mobile version of its RTX 3060 is up to 1.3 times faster than a PlayStation 5, though considering that models with the RTX 3060 will start at $999, the $499 price of the PS5 might look a bit more tenable by comparison.

Nvidia will launch its mobile series at three different tiers with the RTX 3060, RTX 3070, and RTX 3080 releasing in both Max-Q and non-Max-Q configurations starting on January 26. If, like the previous generation, the performance of the mobile versions roughly parallels that of the desktop ones, they will make high-frame rate, high-refresh gaming the norm rather than the exception in gaming laptops.—CS 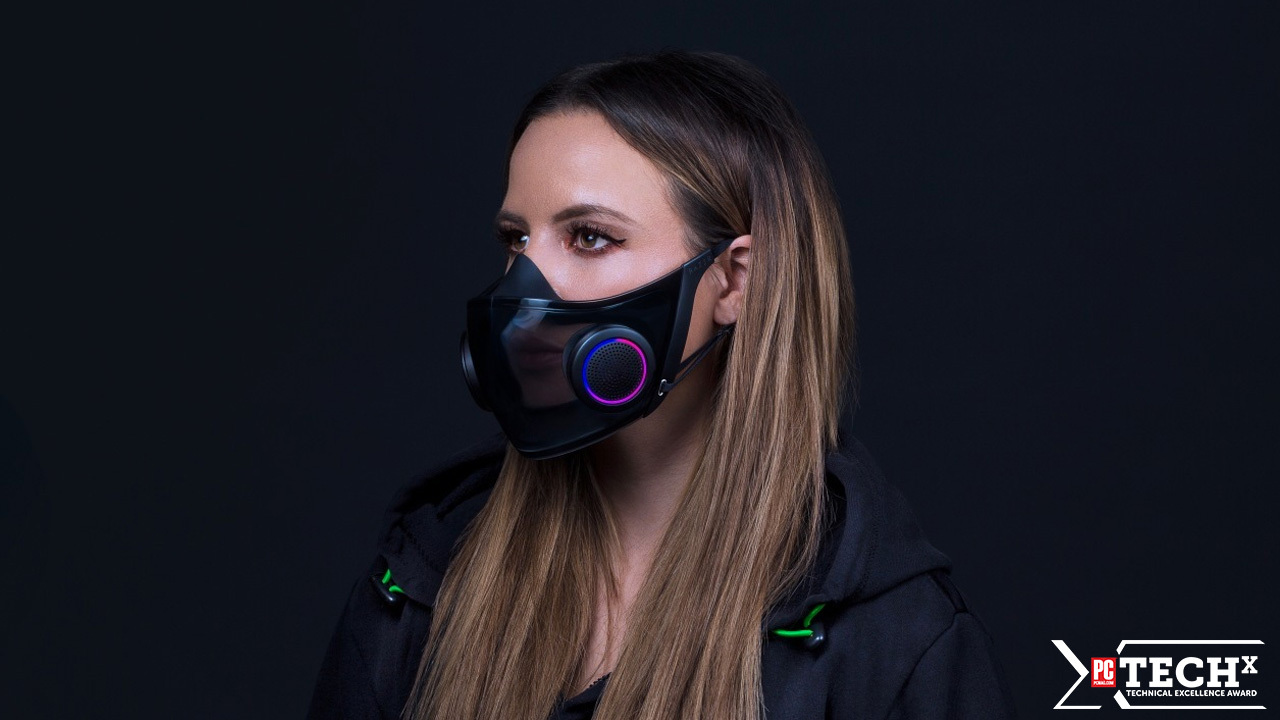 Project Hazel mask might be the most 2021 tech concept out there. It’s a facial covering that adds RGB lighting with 16.8 million colors, a built-in microphone, and speakers, so you can be better heard. It also has a transparent plastic surface that allows people to still see you smile or laugh when you’re covered up. There’s even some interior lighting inside the mask, which can automatically activate in the dark.

However, the mask isn’t designed just to look cool. Project Hazel has also been outfitted with N95-medical grade respirators and special Smart Pods designed to regulate air flow and filter out airborne germs. The ventilators on the mask can also be pulled out and “recharged” by placing them inside a bundled wireless fast charging box, which will also disinfect them with UV light. The only question is: Will it keep your glasses from fogging up?—Michael Kan 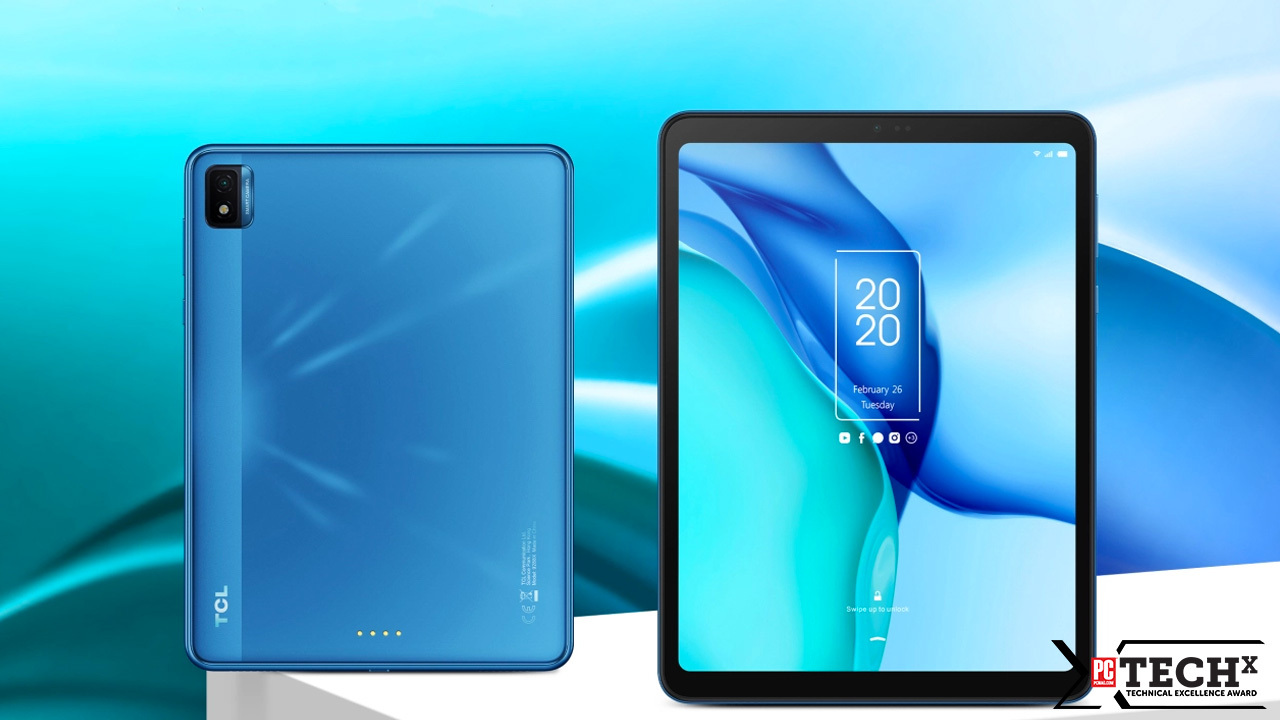 NXTPaper tablet. Transflective screens are much more restful on the eyes than standard LCDs and OLEDs, but attempts at getting them into color with decent frame rate, cost, and scale have been rocky.

TCL’s NXTPaper may be the answer: It’s an 8.8-inch tablet with a 60Hz refresh rate and a color screen that’s genuinely restful on the eyes, for what’s expected to be a relatively affordable price. We wouldn’t be surprised if TCL is already taking calls from Amazon about the screen technology.—SS 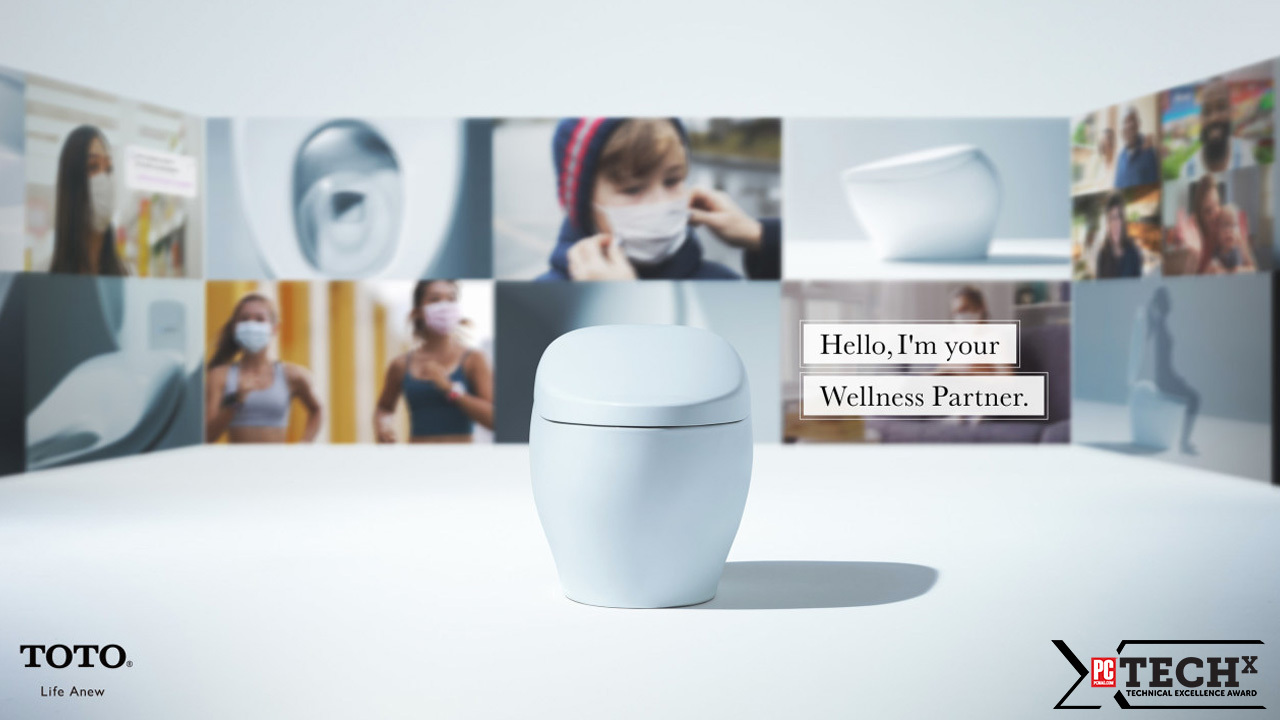 Toto Wellness Toilet might be able to help. When you sit down on this smart throne, it scans your body—and your stool—to determine if you’re healthy. After analyzing your poop, it offers recommendations to help improve your digestion, such as dietary changes, via a companion mobile app.

This health tracking approach is unconventional, but convenient, as it doesn’t require you to wear anything or change your daily routine. The Toto Wellness Toilet is just a concept product at this point, but it could hit the consumer market in the next few years.—AM