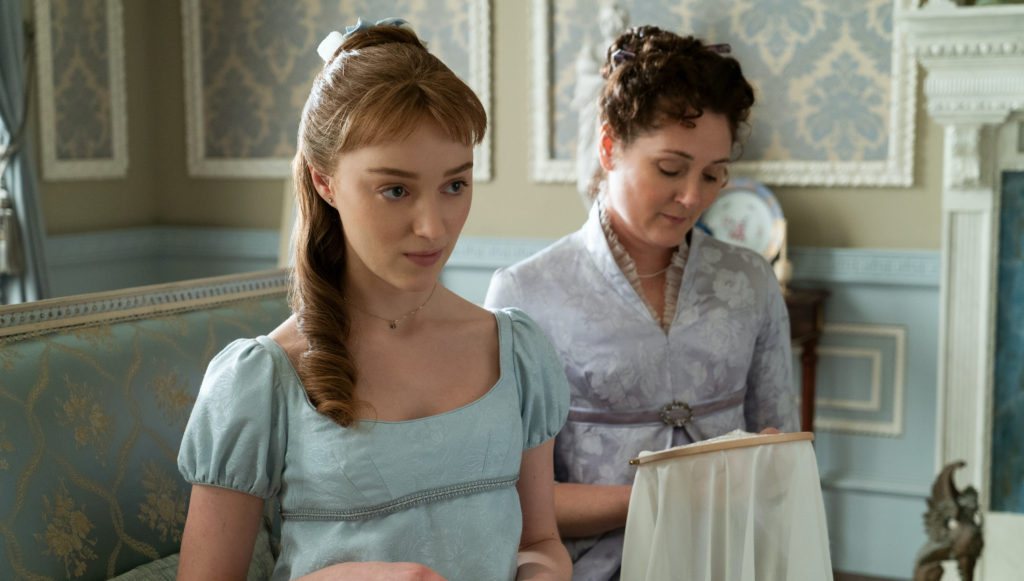 Shonda Rhimes’ first Netflix series looks to be an addictive mash-up of Jane Austen, “Gossip Girl,” and, well, other Shondaland shows. A new teaser has dropped for the Regency London-set “Bridgerton.”

Executive produced by Rhimes, Betsy Beers, and creator/showrunner Chris Van Dusen, “Bridgerton” sees young, wealthy women and men embarking on a new social season in the hopes of finding a spouse. But their plans are thrown off course by the pseudonymous Lady Whistledown (voiced by Julie Andrews), who publishes an incendiary gossip column. “If there’s a scandal,” she promises, “I shall uncover it and share every last detail.” And, yes, that does include names.

“You do not know me and never shall,” Lady Whistledown narrates in the spot. “But be forewarned, dear reader: I certainly know you.”

Based on Julia Quinn’s bestselling novels, “Bridgerton” “follows Daphne Bridgerton (Phoebe Dynevor), the eldest daughter of the powerful Bridgerton family as she makes her debut onto Regency London’s competitive marriage market. Hoping to follow in her parents’ footsteps and find a match sparked by true love, Daphne’s prospects initially seem to be unrivaled,” according to the show’s synopsis. “But as her older brother begins to rule out her potential suitors, the high society scandal sheet written by the mysterious Lady Whistledown casts aspersions on Daphne. Enter the highly desirable and rebellious Duke of Hastings (Regé-Jean Page), committed bachelor and the catch of the season for the debutantes’ mamas. Despite proclaiming that they want nothing the other has to offer, their attraction is undeniable and sparks fly as they find themselves engaged in an increasing battle of wits while navigating society’s expectations for their future.”

Rhimes has created, run, and produced several hit network dramas, including “Grey’s Anatomy,” “Scandal,” “How to Get Away with Murder,” “Private Practice,” and “Station 19.” In 2017, she announced she was moving from her longtime home, ABC, to Netflix. The Emmy-nominated mogul’s other upcoming Netflix projects include a series about con artist/phony socialite Anna Delvey. The show is based on Jessica Pressler’s New York Magazine feature.