Many people are studying online or working from home during the COVID-19 situation. You shouldn’t waste time taking screenshots during a webinar or meeting. Otherwise, you could miss some important information. But if you want to take some screen grabs for future reference, it’s better to use a tool that can do it automatically in the background. Such a tool may also be useful for documentation purposes.

Tip: check out Automatic Screenshotter or Auto Screen Capture as well as they serve similar purposes.

AutoScreenshot is an open source program that can take screenshots at regular intervals. It is a portable software. The program has a compact interface, with all of its options available on a single screen.

It saves the screenshots in the folder it was extracted to. It creates a new sub-folder to store the day’s screenshots, for e.g. a new folder for today, one for tomorrow and so on. But you can change the save folder using the browse button next to the “output directory”. Click the “Open directory” button to open the current save folder in Windows Explorer. 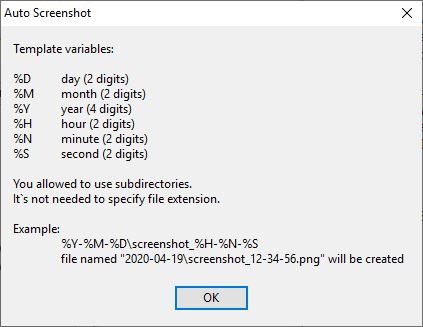 Aside from the year which is saved in 4 digits, the others are written as 2-digit numbers. AutoScreenshot uses the 24-hour format for the time. You can customize the naming style using the “Filename Template” menu. It has a few presets to choose from, though you can choose your own. Use the separator to specify a sub-folder. You may customize the filename template to use words or names too, for e.g. ghacks. The program will add an incremental number to the suffix for subsequent screenshots.

AutoScreenshot saves a new screenshot once every 5 minutes, you can change this by setting a new saving interval. The default format used for screenshots is PNG, but you can change it to JPG, BMP or GIF. The application supports 24-bit and 8-bit color depth. 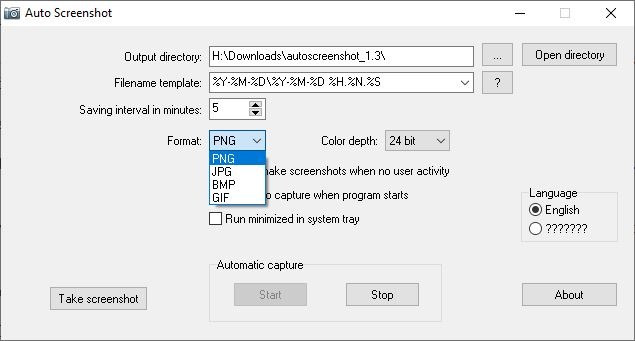 Hit the “Take Screenshot” button to capture the screen once. Though it doesn’t appear to be instantaneous, it does save the snapshot at the moment when the button was clicked. To begin the automatic capture which AutoScreenshot specializes in, click on the Start button.

The program will begin saving screenshots once every few minutes, depending on your selected interval. Use the Stop button to end the automatic capture process.

There are three options that you can enable in AutoScreenshot. If you don’t want the program to save screenshots when the system is idle, for e.g. when you’re away from the computer, you should toggle the option that says “Do not make screenshots when no user activity” (probably an incomplete sentence that ends with “is detected”).

Toggle the “Start Auto Capture when program starts” to make the program capture screenshots automatically. The application can be set to run quietly in the background from the system tray if required.

AutoScreenshot is an open source software. There is one flaw in the program which I’d like to point out. It is the lack of an option to select a region or window for the screen capture. Since there isn’t any setting, the only screenshots it saves are full screen snaps. And of course, there’s no built-in image previewer or editor, though I don’t think that’s necessarily bad.

Thank you for being a Ghacks reader. The post Take screenshots at regular intervals automatically with AutoScreenshot appeared first on gHacks Technology News.