As a yoga teacher, I love the practice because it gets my body—and my mind—feeling right. I haven’t experienced anything like it until I started using the SoulCycle At-Home Bike ($2,500 plus a $39.99 monthly membership). This premium addition to your smart home gym features a sleek and sturdy steel frame with a 21.5-inch touch screen on which you can stream immersive virtual classes that bring the heart-pumping, inspirational studio experience for which SoulCycle is known to the comfort and safety of your home. Its classes will have you sweating as you work to master choreography moves while simultaneously spinning the pedals beneath your feet to the beat of music. Whereas the Peloton Bike motivates you through metrics and competition, SoulCycle offers a more meditative, dance-focused experience. Both are excellent options, and equally worthy of our Editors’ Choice award for high-end smart indoor cycles.

A Premium Price and Design

The SoulCycle At-Home bike costs about the same as Peloton’s top-of-the-line model, the Bike . It will set you back $2,500, plus $39.99 per month for a Variis class membership, making it one of the most expensive smart stationary bikes on the market. In addition to the bike and the membership, you’ll need a pair of clip-in cycling shoes, and you’ll also want a set of light hand weights. SoulCycle offers compatible Pearl Izumi clip-in cycling shoes starting at $175, and a set of two-pound hand weights for $18. That brings the total cost of the bike and accessories to $2,693.

Without accessories, the Peloton Bike costs $2,495, or you can get the original Peloton Bike for $1,895. Peloton’s Essentials package, which includes the Bike or the original model, a pair of clip-in shoes, a set of hand weights, and a bike mat, costs $2,695 or $2,045, respectively. Peloton charges $39 per month for an All-Access class membership.

If $2,500 is more than you can afford upfront, SoulCycle offers financing options starting at $64.10 per month for 39 months. That doesn’t include the Variis membership fee, so if you finance the bike, it will cost around $100 per month in total while you’re paying off the machine. 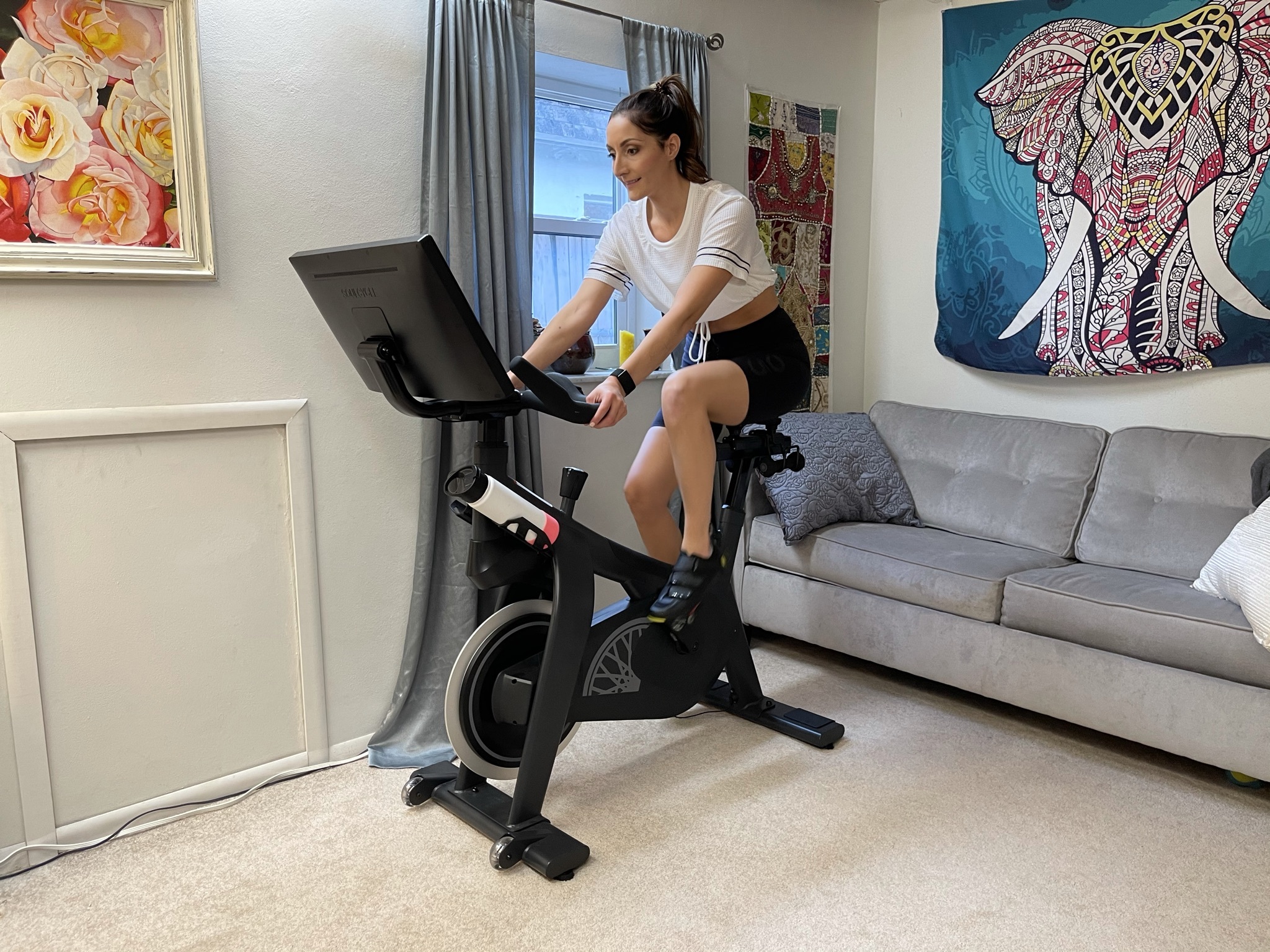 NordicTrack Commercial S22i Studio Cycle one-ups this with the ability to automatically adjust not just your resistance, but also your incline and decline, as you ride. Most other smart stationary bikes, including the Bike and SoulCycle, can’t incline or decline, let alone do so automatically.

On SoulCycle’s bike, you have to manually control the resistance with a knob. It features a magnetic Eddy current and micro-adjust knob for smooth, silent, frictionless resistance. Rotating the knob adjusts the Eddy current brake, made up of two large magnets that add and remove resistance based on their distance from the flywheel. Rotating the dial to the right increases the resistance, while rotating it to the left decreases it. The knob also serves as an emergency break you can push down on to stop the pedals. 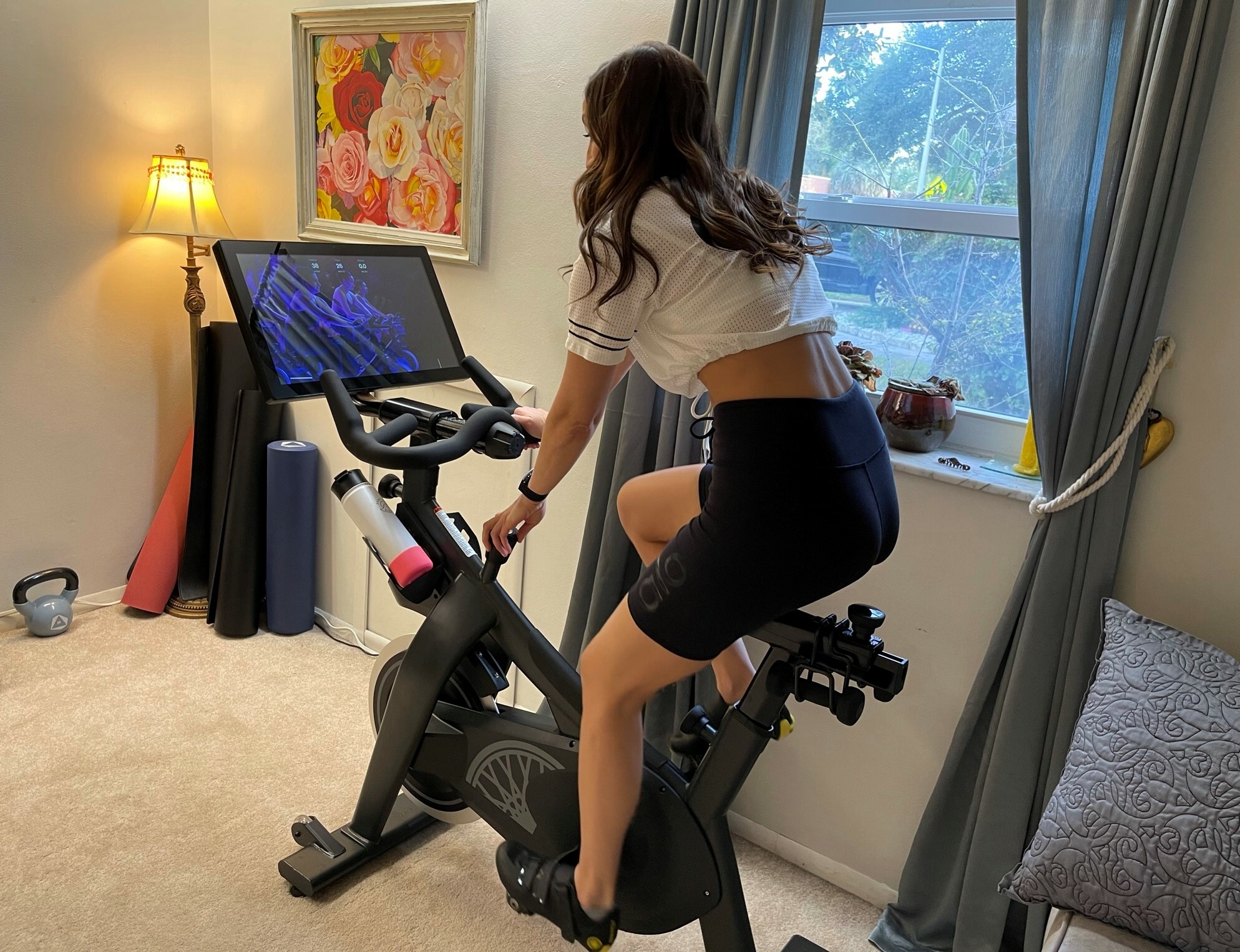 wireless headphones and heart rate monitors. I had no problem using my Apple AirPods with it.

With the touch screen, the bike weighs 142 pounds and measures 62 by 22 by 54 inches (LWH), making it slightly wider and shorter than the Bike (59 by 22 by 59 inches). Two small wheels on the front base make it fairly easy to move around—I know this well because I had to move it from my workout room, which is lower than the rest of my house and susceptible to flooding, to my dining room during tropical storm Eta. 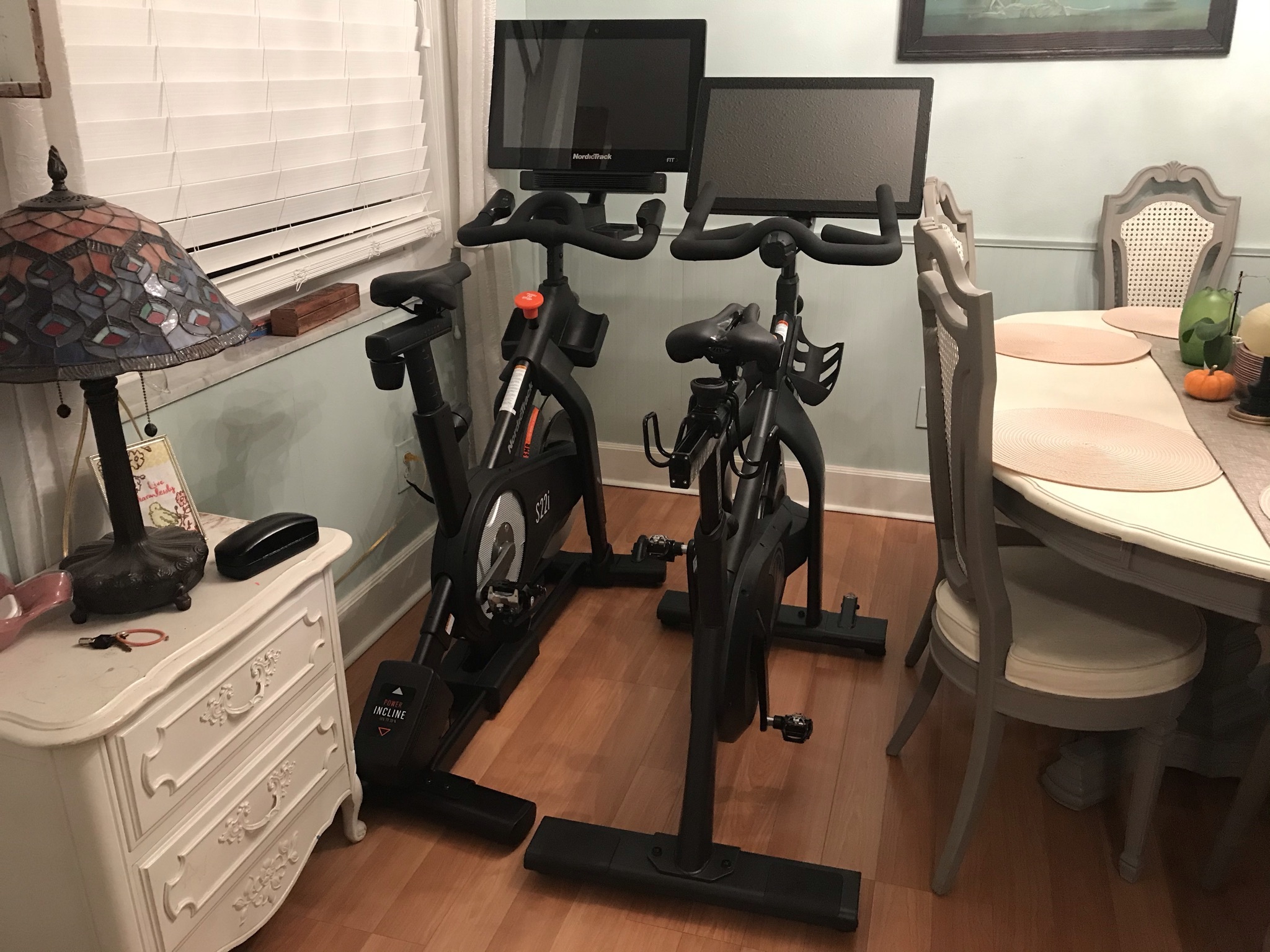 Pearl Izumis SoulCycle offers feature Delta clips on the bottom. Having used both, I prefer the Pearl Izumis to Peloton’s shoes because I find they’re easier to get in and out of. The former features three Velcro straps while the latter has a buckle and two Velcro straps. The buckle might hold up better than Velcro in the long term, but it can be cumbersome to adjust, and the last thing you want to do after a tough cycling session is struggle to remove your shoes. 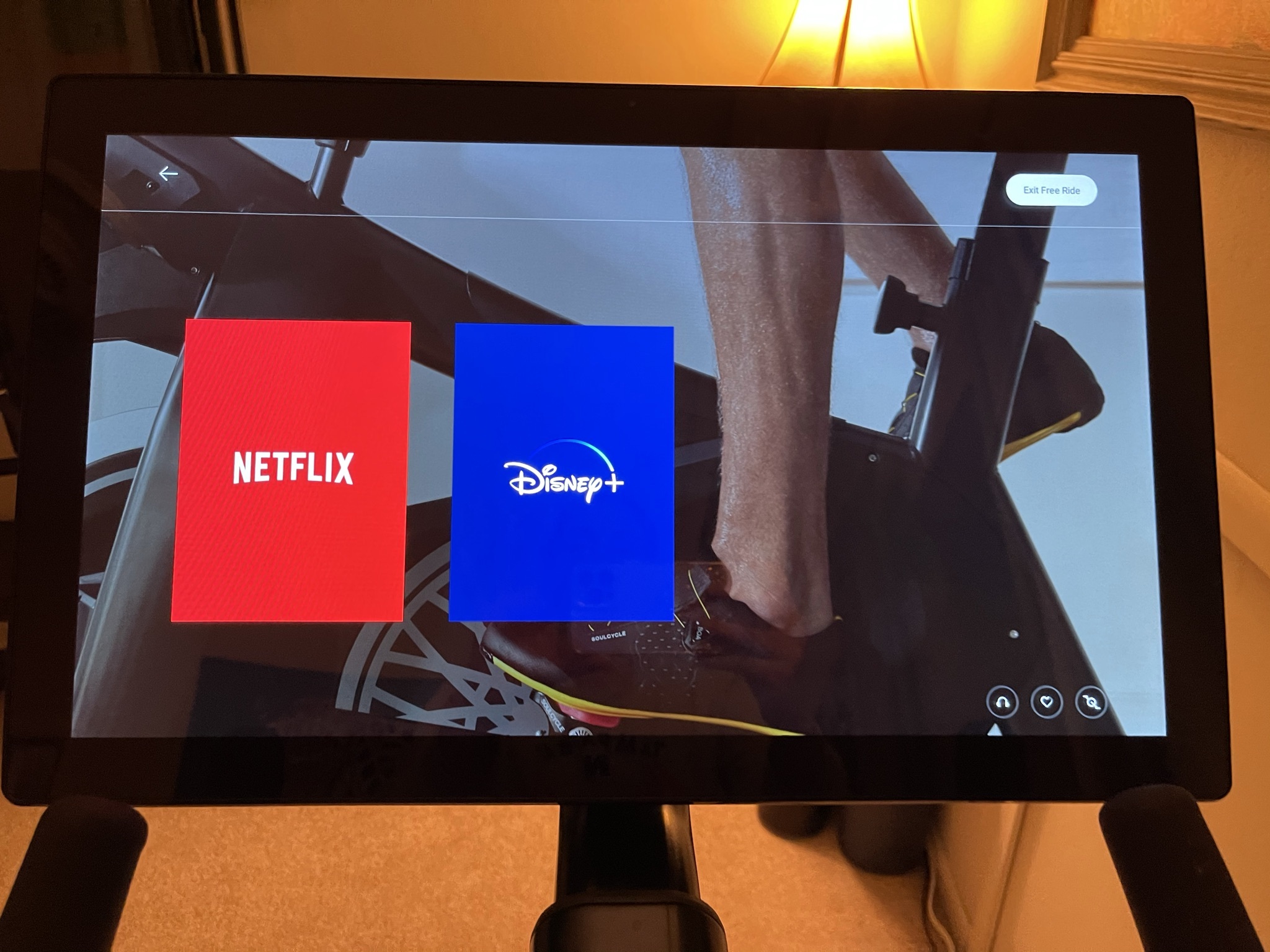 Bowflex VeloCore beats both on this front, with support for Amazon Prime Video, Disney , Hulu, and Netflix.

With the Variis membership, you also get access to an eponymous mobile app (available for Android and iOS) that features boxing, HIIT, meditation, running, sculpt, strength, stretching/recovery, walking, and yoga classes from brands like Equinox, PURE Yoga, Precision Run, HeadStrong, Myodetox, Rumble, [solidcore], and TB12. I wish these classes were available on the bike’s built-in display, but they’re only accessible via the Variis mobile app. 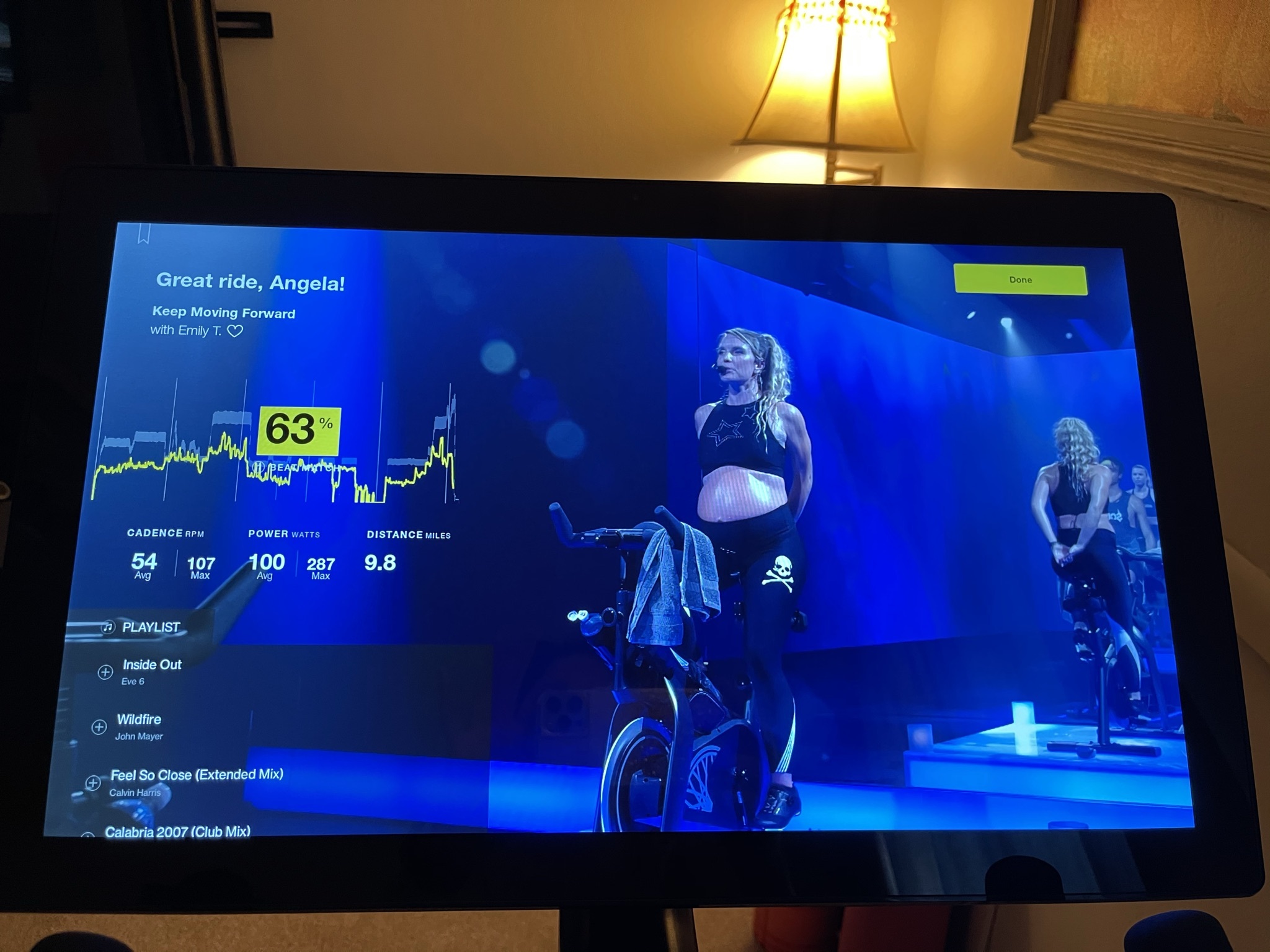 Almost all SoulCycle workouts also incorporate choreography moves like handlebar push-ups (bending your elbows to the sides), crunches (bending your elbows straight back), and tap-backs (shifting your hips back while standing). It can be very challenging to cycle on beat while simultaneously doing the choreography moves. It’s almost like that brainteaser where you pat your head while rubbing your stomach in a circular motion—it’s challenging because you’re doing one thing on the bottom half of your body (following the beat) and something else on your top half (dance-inspired moves). This is especially true during intermediate and advanced classes, which typically involve fast and varied choreography moves.

Swiping in from the bottom left side of the screen with your finger brings up a picture-in-picture Form Rider View. If you’re having trouble following the beat or choreography, the Form Rider View can help. 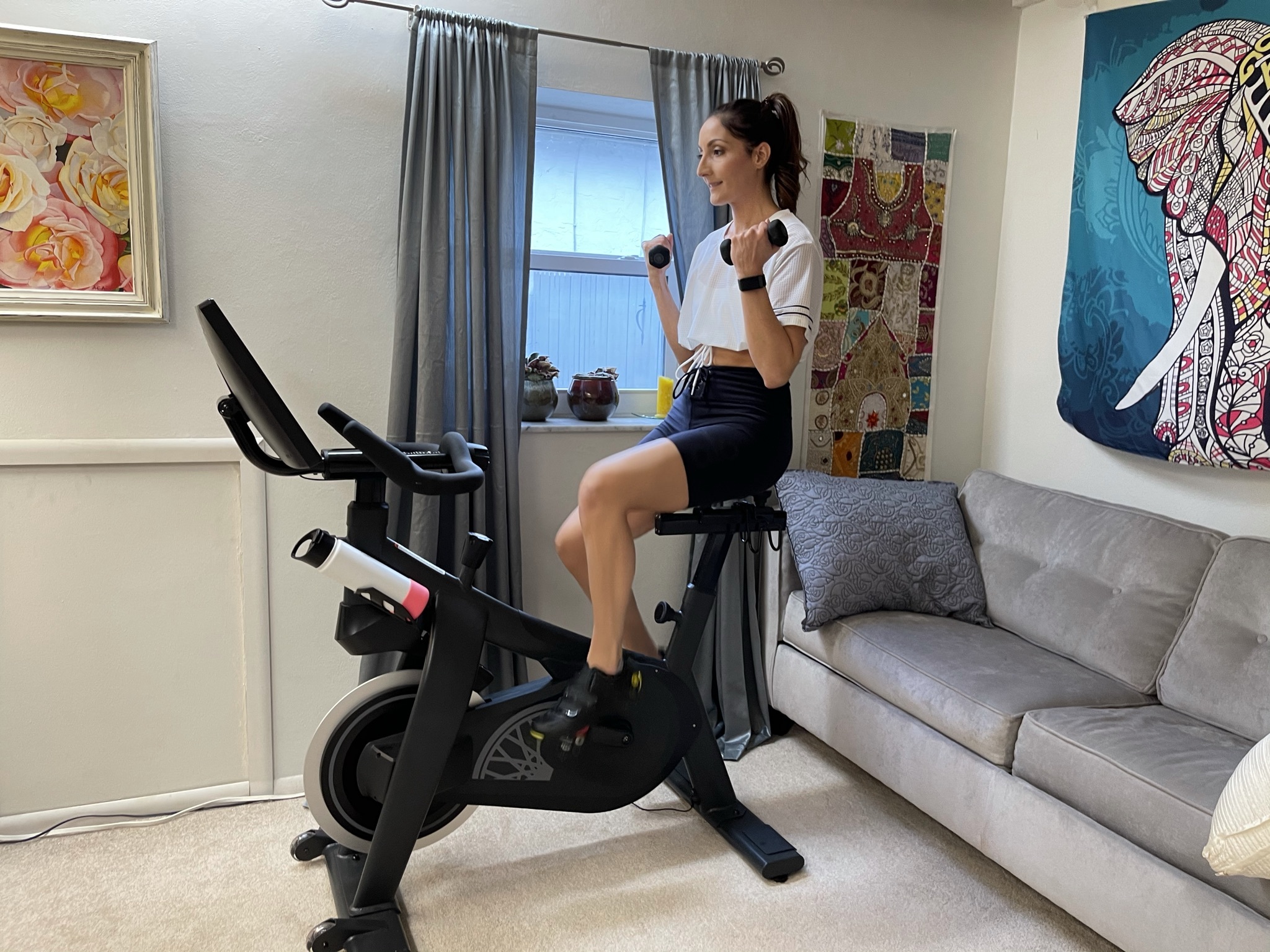 intentional decision). Swiping in from the right side of the screen brings up volume, audio output, and connected heart rate monitor controls.

Before testing the At-Home Bike, I had never taken a SoulCycle class. I first heard of the brand about a decade ago while living in New York City, where SoulCycle is based. Several friends were devotees of SoulCycle studio classes, but I was deeply entrenched in the yoga scene, and indoor cycling didn’t seem like my thing. The cost also held me back, as SoulCycle studio classes are expensive: the going rate is around $26 to $36 for a single session, depending on the location. 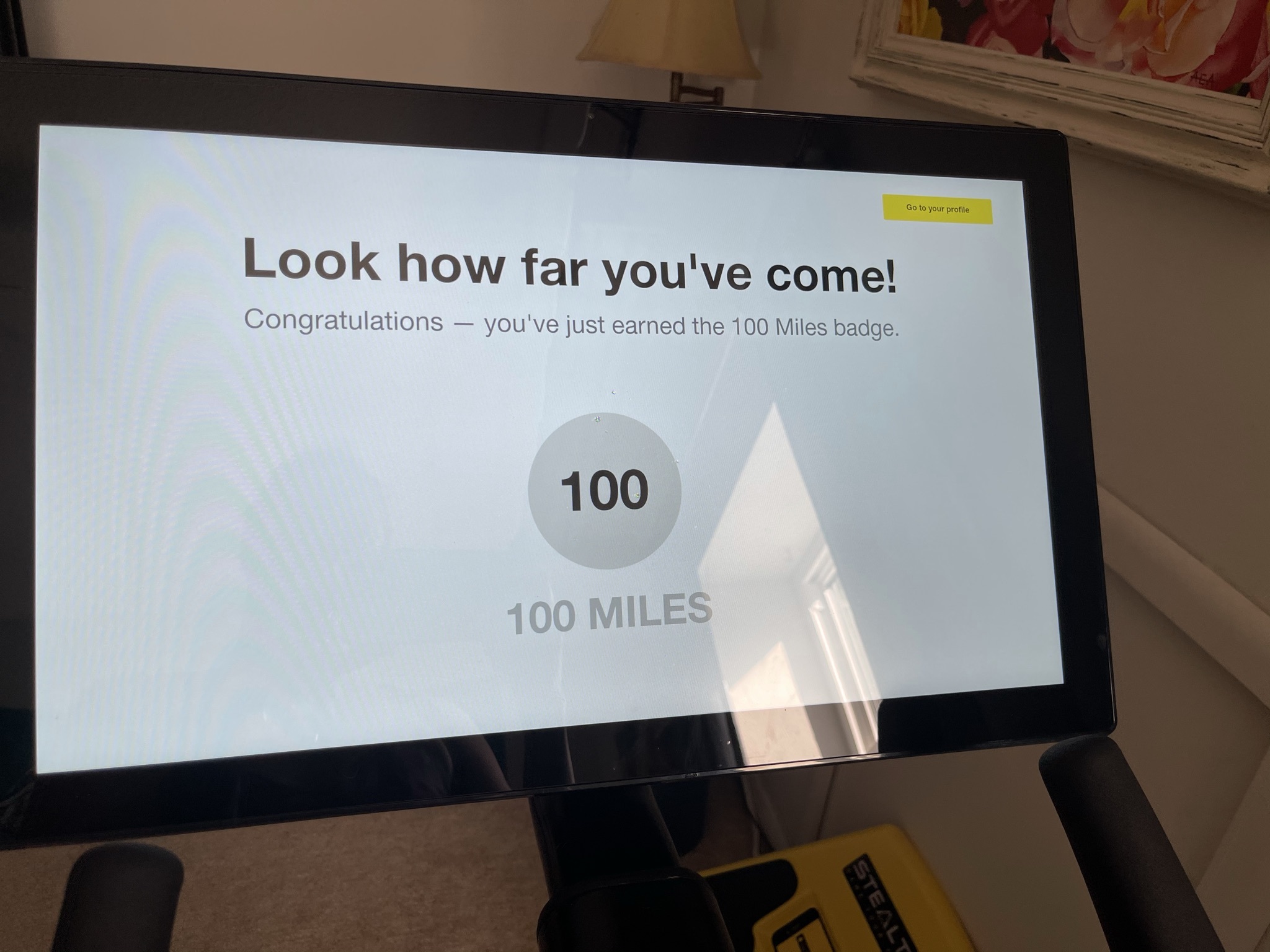 Ross, talks a lot about bravery, resilience, and making a commitment to yourself to push on and work hard, even when times get tough. More than just a workout, his classes have lifted my spirit amidst the COVID-19 pandemic, and I’m so grateful for them.

My only problem is that I want more Ross content! At the time of this writing, he currently has 11 classes on the platform, and I’ve already taken 10 of them (his latest class just dropped today, and I plan on taking it as soon as possible). 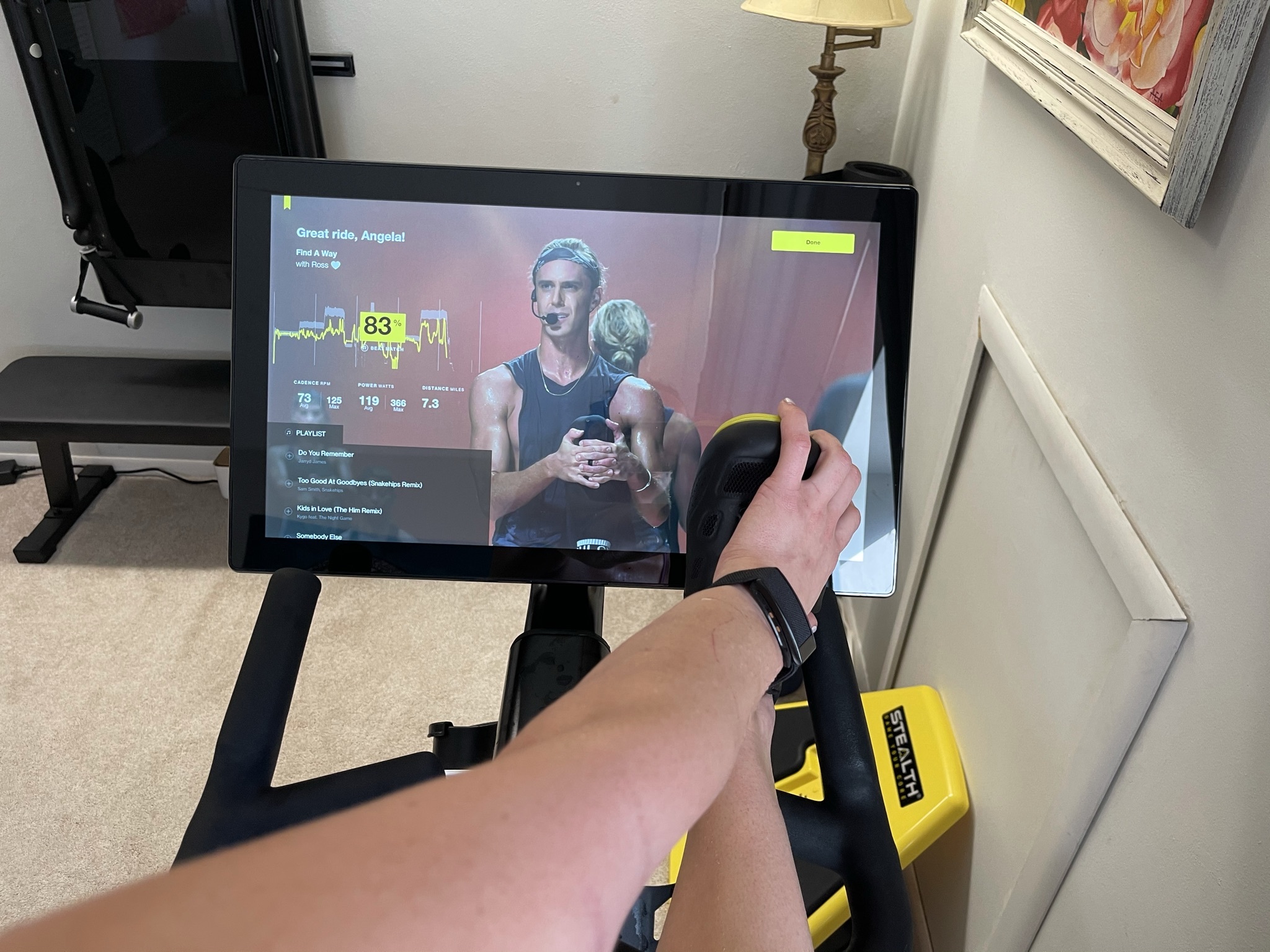