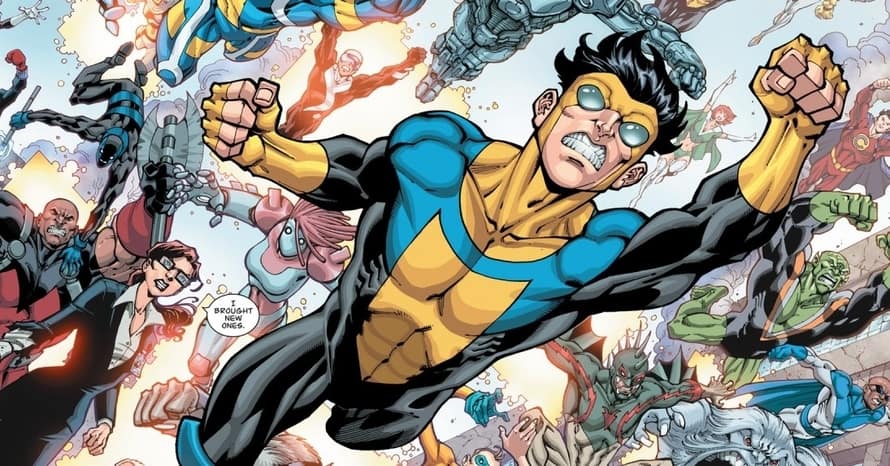 Robert Kirkman has revealed that the first footage from his animated series Invincible will be released “very soon”.

One of the most prominent voices currently working in the comic book industry, Robert Kirkman has numerous hits under his belt including the genre-defining The Walking Dead. His comic series Invincible, which focuses on the son a superhero developing his own superpowers, is also set to get the television treatment. Unlike The Walking Dead, the Invincible adaption will be animated and is set to premiere on Amazon Prime.

Danai Gurira Talks Her Last Day On ‘The Walking Dead’

Speaking to Cartoonist Kayfabe, Robert Kirkman revealed that he and Amazon Prime would be revealing the release date and first look at Invincible relatively soon.

“We should be announcing the release date and showing some footage from that show very soon. I’m very excited about that extremely violent cartoon.”

Originally announced in 2018, details have been slim on the animated series. Kirkman revealed that this was because of the large gap between the initial voice recordings and animating the project.

“So when we hired the voice actors for Invincible, it started leaking — J.K. Simmons, and Sandra Oh, and Steven Yeun are gonna be doing this cartoon series — so we had to announce the cast, otherwise it would have been leaked, and who knows how they’re gonna report that kind of stuff. So we had to announce when we started doing voice recording, but you start doing voice recording before you start doing animation. So that’s why there’s a big gap between, ‘We’re doing the Invincible show, and here’s this amazing cast, and don’t worry, it’ll be out at some point in the future.’”

We have no idea when Robert Kirkman and Amazon Prime could debut the first look at Invincible but the upcoming Comic-Con@Home seems like the perfect platform to show off the series. The online convention will open its virtual doors to fans on July 22 and come to a close on 26. Seeing as everyone’s still going to be cooped up at home and will most definitely be tuning in to what Comic-Con@Home has to offer, Invincible might just steal the convention.

Are you excited to see Robert Kirkman’s Invincible series? Comment below and let us know!

Here is the official synopsis for Invincible:

Mark Grayson is a normal teenager, except for the fact that his father is the most powerful superhero on the planet. Shortly after his seventeenth birthday, Mark begins to develop powers of his own and enters into his father’s tutelage.

Invincible is scheduled to air on Amazon Prime sometime in 2020. Stay tuned to Heroic Hollywood for the latest news on Robert Kirkman’s Invincible as we learn it and subscribe to our YouTube channel for more content in the future!