Do you rotate your keyboard at an off-angle relative to your monitor when you play video games? It’s a popular habit among pro and competitive players who want a more comfortable, ergonomic setup for gaming. With that in mind, a growing number of gamers are putting aside their feature-laden, full-size gaming keyboards for smaller ones.

Typically, those have been tenkeyless (TKL) models, the industry lingo for keyboards with the number pad lopped off. Of late, though, even-smaller boards in the “60 percent” form factor have been building up steam, mostly among lesser-known, enthusiast-minded keyboard makers. Plenty of companies offer TKL models, but with the Huntsman Mini ($119.99 for the purple-switch version tested here), Razer is among the first of the big PC-gaming brands to make a 60 percent keyboard in the name of esports. And it’s a pretty good effort.

Rolling Back to the 60s

For the uninitiated, a 60 percent keyboard is an ultra-compact design with 60 to 65 keys, or roughly 60 percent of the layout you’d get on a standard 104-key keyboard. With 61 keys, the Huntsman Mini has all the keys you’d find in the primary “typewriter” section of an ordinary keyboard: the alphanumeric keys, plus primary system keys like the two Ctrl and two Alt keys and the Windows key. All the other keys, such as the function row, the cursor arrows, and Delete, have been stripped away to make the keyboard more space-efficient.

The Huntsman Mini comes in black or white (“Mercury”) body-and-key designs. Measuring 1.5 by 11.6 by 4.1 inches and weighing 15.3 ounces, the Huntsman Mini is significantly more compact and lighter than most gaming keyboards. Losing all those keys reduces the footprint by a lot. That doesn’t necessarily confer any typing-related benefits, but it does have other advantages. As a Razer keyboard, the Huntsman Mini supports the company’s configuration software, Synapse. Synapse gives you the ability to remap its keys, configure the board’s RGB lighting, and save software-specific configuration profiles. You can save up to five profiles to carry in the Huntsman Mini’s onboard memory, adding to the keyboard’s practical portability. 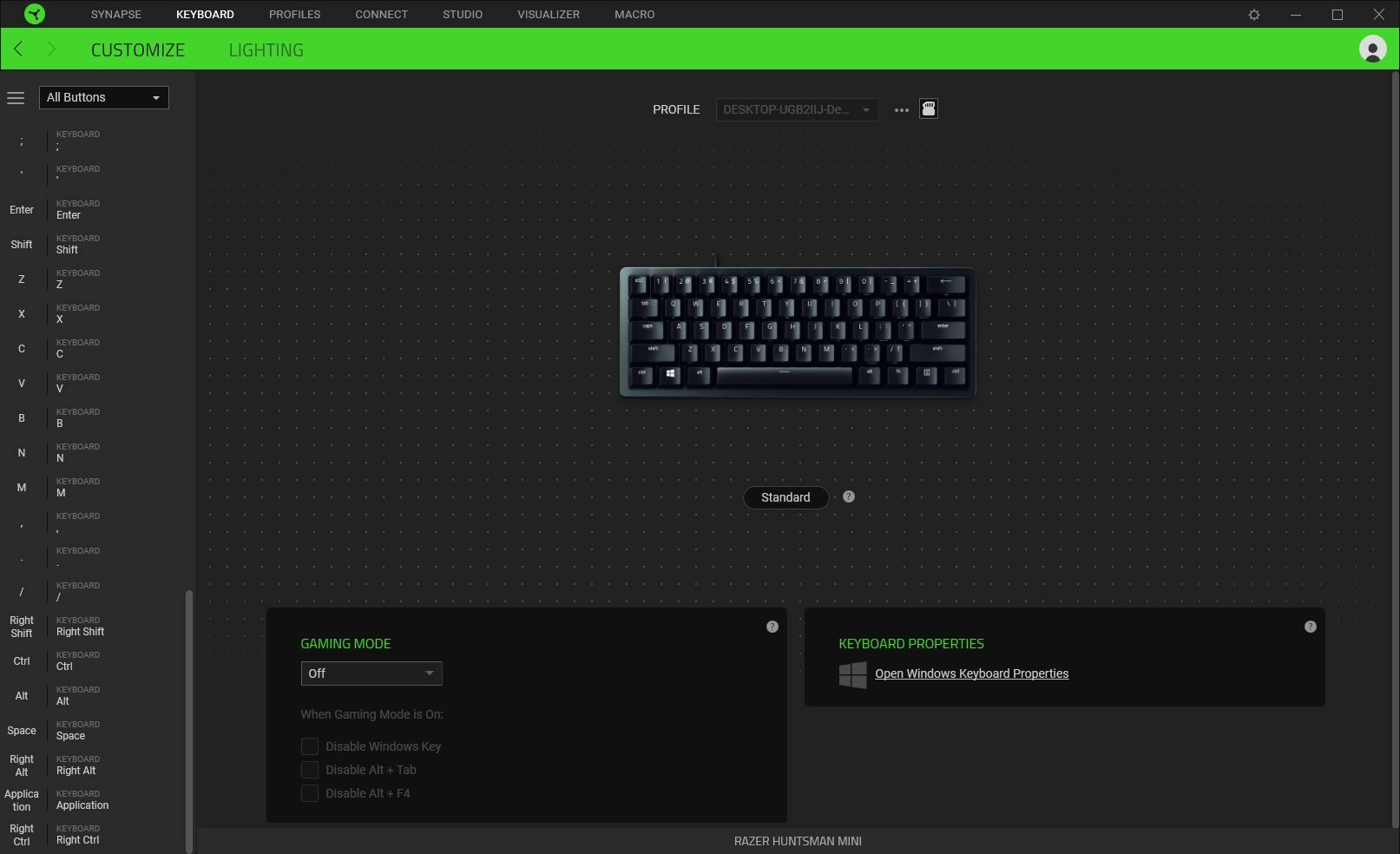 If you’ve used a Razer keyboard before, especially the Huntsman Tournament Edition, you’ll recognize the Razer look and feel, and the software advantages. At the same time, the compact form factor opens the door for new use cases, to see the Huntsman in a new light. Ducky One 2 Mini RGB. That said, that’s a relatively small price bump for Razer. The unique features and software support make the Huntsman Mini an appealing option for Razer-familiar gamers looking to try a 60 percent design within a known ecosystem, and without diving into the daunting nooks and crannies of the really serious mechanical-keyboard scene.