One of the advantages of video streaming services is that you can discover movies that might not have made it to mainstream audiences. This is doubly true of Mubi, with its eclectic collection of content handpicked by its curators. The service features a substantial collection of films, documentaries, and shorts you can stream at 1080p and download on mobile devices at any time. Mubi also has several community features that facilitate film discussion and discovery. Some people may prefer the greater range of choices offered by other video streaming services, but the prospect of a curated library will certainly appeal to others.

What Can I Watch on Mubi?

Mubi is similar to The Criterion Channel in that it is solely dedicated to films, with none of the TV-style series available on the major streaming services. Mubi has two main sections: a lineup of 30 films in its Now Showing section that changes every day and a Library that includes hundreds of films that have since rotated out of the Now Showing section. A Mubi representative confirmed that Mubi’s streaming rights for each title varies in length and that the available titles in the Library varies by country. At the time of this review, the number of titles in Mubi’s US Library sits at above 800 entries.

For comparison, The Criterion Channel has about 2,000 films available for streaming. Mubi and The Criterion Channel differ in the type of films they offer. Put simply, The Criterion Channel, though it is still a niche service, manages to look mainstream in comparison to Mubi. I recognize many of the films in The Criterion Channel’s library, but only found a few familiar ones in Mubi’s collection. However, the combination of Mubi’s curated Now Showing section and focus on under-the-radar entries most suited for film festivals may be just what some viewers want, particularly those who are tired of superhero movies and over-the-top visual effects. 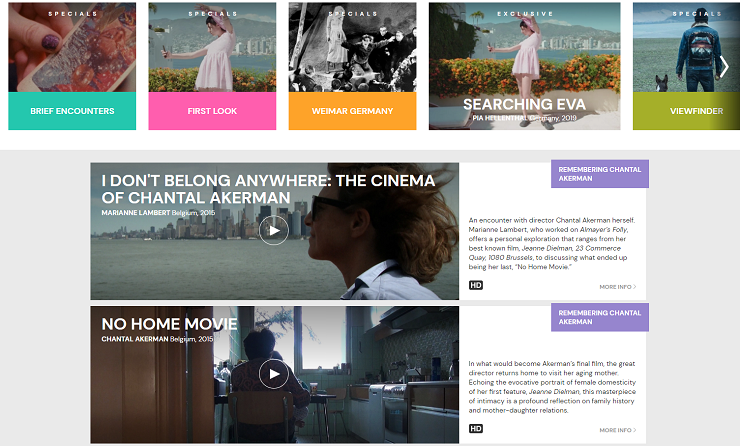 HBO Max (DC, New Line Cinema, and Warner Bros.) and Disney (Pixar, Marvel, and Star Wars) are better options. KweliTV offers a curated selection of shows and films from Africa and beyond. For high-quality short films more in line with Mubi, check out Vimeo‘s library.

Mubi costs $10.99 per month (discounted to $95.88 if you pay for a year up front), but you can sign up for a free account if you only want to browse its film database and contribute to discussions. Mubi also offers a seven-day trial, but you must enter payment details to sign up.

The Criterion Collection costs the same as Mubi at $10.99 per month, but its annual rate is slightly more expensive ($99.99 per year). Other video streaming services offer extensive libraries of movies too, though they cater to more-mainstream audiences. HBO Max costs $14.99 per month, Netflix’s Standard Plan (the minimum tier we recommend for most people) is $12.99 per month, and Hulu’s Ad-Free plan is $11.99 per month. Amazon Prime Video and Disney come in cheaper at $8.99 per month and $6.99 per month respectively. Horror fans don’t need to pay as much for dedicated entertainment; Shudder is only $5.99 per month.

If you don’t want to pay anything to stream movies, check out our roundup of the best free video streaming services. Some of your options include Peacock, Crackle, Tubi, and Plex.

In addition to streaming via a web browser, Mubi offers apps for mobile phones (Android and iOS), media streaming devices (Apple TV, Chromecast, Fire TV, and Roku), and Smart TVs (Sony, Samsung, Android TV, and LG). You can subscribe to Mubi as a Prime Video channel, too. Mubi does not offer an app for the Xbox One, but you can use the service on a PlayStation 4.

Mubi’s web interface is simple and easy to navigate. It has a black, gray, and white color scheme that helps the film thumbnails pop. At the top of the page, there’s a search bar, a navigation menu, and an overflow menu that houses a jumble of other settings and sections. The overflow menu not only gives you access to your account, profile preferences, and help resources, but also to your watch list, viewing history, and Mubi’s Browse section. In the latter, you can dive into Mubi’s ever-expanding database of every movie imaginable, not just those in the streaming catalog. I would prefer to have some of these features pulled into the main menu for easier access.

The top menu has five options: Now Showing, Library, Feed, Notebook, and a profile icon. Occasionally, you may see a section called Live; Mubi hosts free films from time to time for both subscribers and non-subscribers. 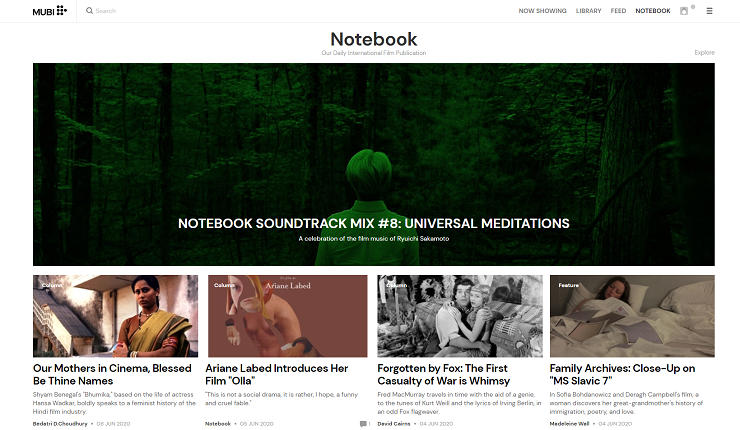 Make Friends With Other Cinephiles

Mubi builds in a few community-oriented features, including the Feed and Notebook sections. The Feed is just a running list of user reviews and social media posts; it’s not particularly useful for content discovery. The Notebook section features editorial content from Mubi staff and other contributors, including reviews and commentary. Film aficionados may find some appeal in the accompanying written content.

Mubi’s profile pages are its best social feature, though. Your profile page lists all of your ratings and reviews, watch list, favorites, lists, along with those you follow and people who follow you. Mubi supports custom profile and background photos. Importantly, you can make your profile private if you don’t want anyone to bother you or critique your taste in films. 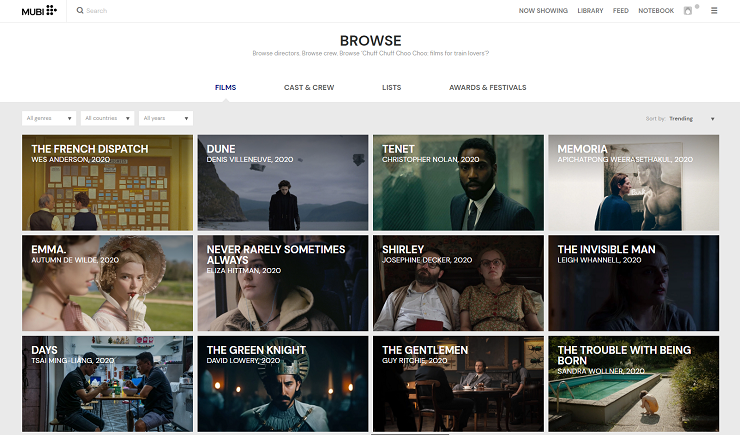 Anime streaming services are among the other exceptions. Crunchyroll lets you set up a similar profile and write reviews of anime series, while DC Universe has an entire section related to browsing DC heroes.

I tested Mubi’s mobile app on a Google Pixel 3 running Android 10. I had no issues signing in to my account. The latest version of Mubi’s Android app feels snappier to navigate and brings over Mubi’s Library and Watchlist features from the web, all of which makes the app feel more cohesive. These same features are available on the iOS app as well.

You navigate the experience via three icons in a bottom menu, one for the Now Showing section, one for the new Library section, and one for your downloaded content. You still can’t access Mubi’s Browse section or manage your community profile from the app, however.

App settings are available via the overflow icon in the lower-right corner. Here, you can view your subscription status, restrict downloads to Wi-Fi only, and choose the download quality. You can also now access your Watchlist from this menu. There are not settings for a default streaming resolution (you can set this from the web interface) or adjusting the subtitles on the Android app. 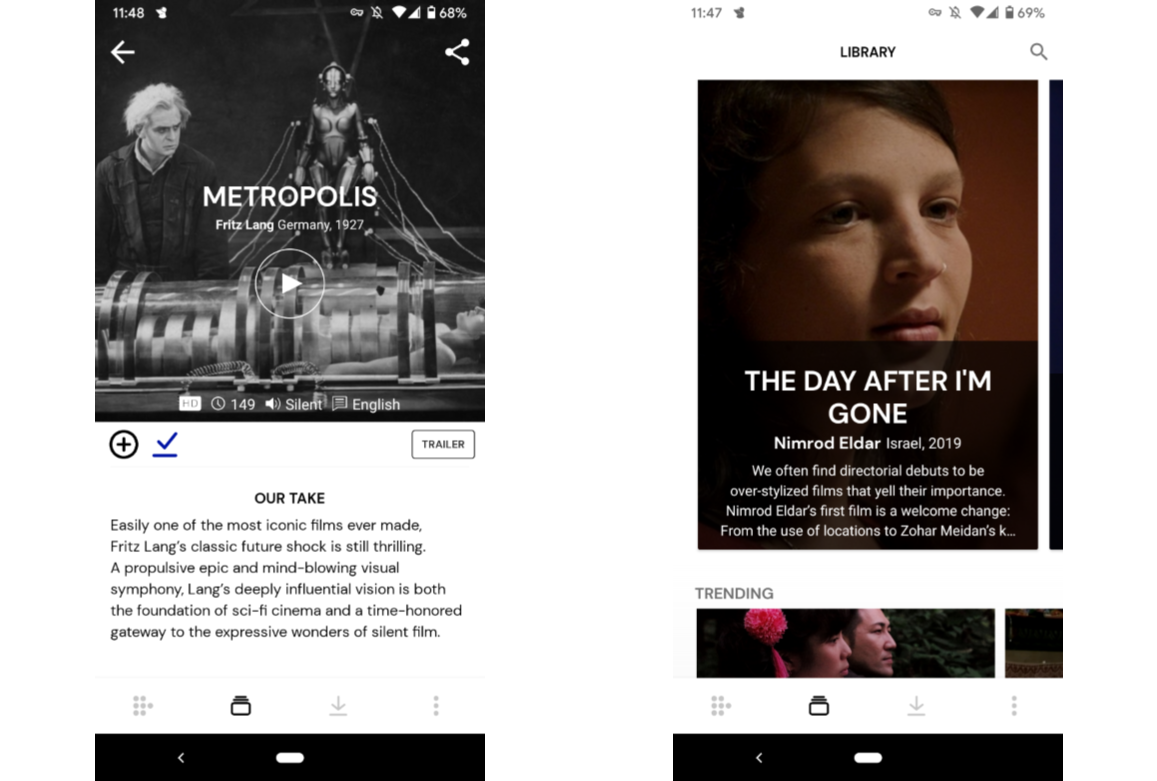 Mubi’s playback screen is basic but works fine. You get a play and pause button, a volume slider, a scrubbable video progress bar, and a language/subtitle toggle. That’s it. There’s no way to select or view the video playback resolution from the player. You can select a maximum video streaming resolution in the main Settings section, but I would still like the option to change or even confirm this resolution on the player. The Mubi mobile app’s playback screen has the added benefit of 15-second rewind and fast-forward buttons. One minor difference is the color of the video progress bar; on the web it’s blue, but on mobile, it’s green. Note that some older films may play in a letterboxed format.

Mubi allows you to sign in on five devices at the same time, but only supports two simultaneous streams. Most other video streaming services allow you to stream on three devices at the same time. As with The Criterion Channel, Mubi does not show any ads during playback, which is ideal. Some paid services, such as CBS All Access, Hulu, and Quibi still show ads in paid tiers.

Both Mubi and The Criterion Channel allow you to stream films in up to 1080p resolution. Other movie streaming services, including Apple TV , Disney , Netflix, and Prime Video offer 4K content.

I tried streaming Carnival of Souls in HD over my home Ethernet connection (200Mbps download) and encountered no buffering or streaming issues. Audio effects and dialog sounded crisp, as well.

Mubi does include subtitles for its content, but there’s no way to customize them from the player. You can change the size of the subtitles (Regular or Large) in the main Settings section, but that’s the full extent of options. The Criterion Channel does not offer subtitle customization options either, but many other video streaming services, including BritBox, offer far more options. Although we wouldn’t necessarily expect it for movie streaming services, Mubi does not include Audio Descriptions. Audio Descriptions are audible narrations of scene changes that would not be otherwise discernible through the regular dialog. Apple TV , Netflix, and Prime Video all support audio descriptions.

The available subtitle language depends on the film. Some international films are not available in English, so you may need to rely on subtitles quite a bit if you are not multilingual. You can manually set your default language in the main Settings section. Apple TV is also particularly good about offering content in many languages, with the added benefit of letting you select a language for subtitles directly from the playback screen.

Mubi does not include any parental control tools, nor does it list the parental ratings for any of its content. A representative from Mubi explained that the service is for an adult audience. Some parents might want the option to block or only allow specific films, so we would like to see some options to accommodate that scenario. The Criterion Channel also neglects to include parental control options. Parental controls are common with mainstream services, including HBO Max, Disney , and Netflix.

A VPN is an excellent tool for protecting your privacy online from the ever-present eyes of advertisers, your ISP, and the government. VPNs can also help you spoof your location online. This is a problem for some video streaming services if some content is region-specific. As such, many video streaming services attempt to block VPN traffic outright.

Mubi is available in 195 countries, but it does not offer the same titles for streaming in all locations. I tried to stream Mubi content while connected to both US- and Spain-based Mullvad VPN servers. I had inconsistent success with streaming. Even if you do find a VPN that works with all of your video streaming services, there’s no guarantee that the two will continue to coexist peacefully.

Mubi combines many aspects typically associated with film communities—lesser-known titles, discussions, and an extensive collection of information—into a single service. In that regard, Mubi is impressive. We also like the support for offline downloads and 1080p streaming (though the top services offer 4K content). Still, we’d like Mubi to add support for multiple profiles and subtitle customization options. Both mobile apps have Mubi’s most important features now too, but more of the social features should make the move from the web.

Netflix remains our top pick for on-demand video streaming services because of its top-notch original content and feature-filled apps. Hulu with Live TV and YouTube TV are our top picks for live TV streaming; both boast excellent channel lineups and useful DVR capabilities.