Refreshed for 2021, MSI’s GS66 Stealth ($2,699 as tested) now has Nvidia’s “Ampere” GeForce RTX 30 Series graphics to boost to frame rates. Our test model also brings a special treat we expect to see in more and more gaming machines as the year goes on: a brand-new 240Hz QHD G-Sync display that takes gaming visuals to the next level. The GS66’s sturdy build and per-key RGB keyboard continue to impress, though this isn’t the fastest gamer on the block.

Despite an eight-core Intel Core i7 chip and a GeForce RTX 3080 with 16GB of video memory, our test model trailed the Alienware m15 R4 with an RTX 3070 in our benchmarks. The GS66 Stealth’s sedate looks can be a pro or a con, but unless the Alienware’s otherworldly appearance throws you off, give it strong consideration; it retains our Editors’ Choice badge for high-end 15.6-inch gaming notebooks.

Stealthy in All Black

The GS66 Stealth is physically unchanged from its 2020 version. Its design is stealthy not only because it’s all black, but also because its conventional styling and demeanor blend in with the crowd.

A lack of external lighting and exotic design flourishes can be a plus or a minus, depending on what you’re after. I’ll venture that a little bling for the price of my tester would be welcome. Even MSI’s blacked-out dragon-shield logo on the lid is nearly invisible in darker lighting. 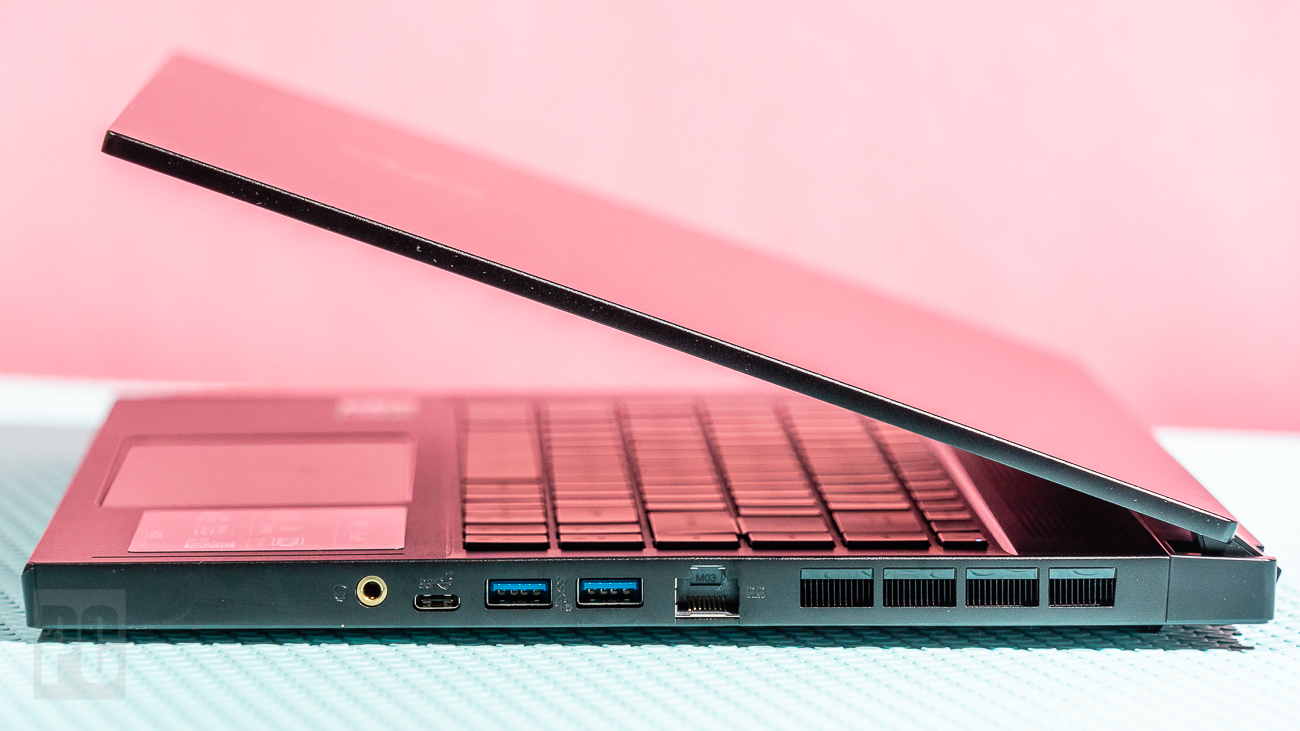 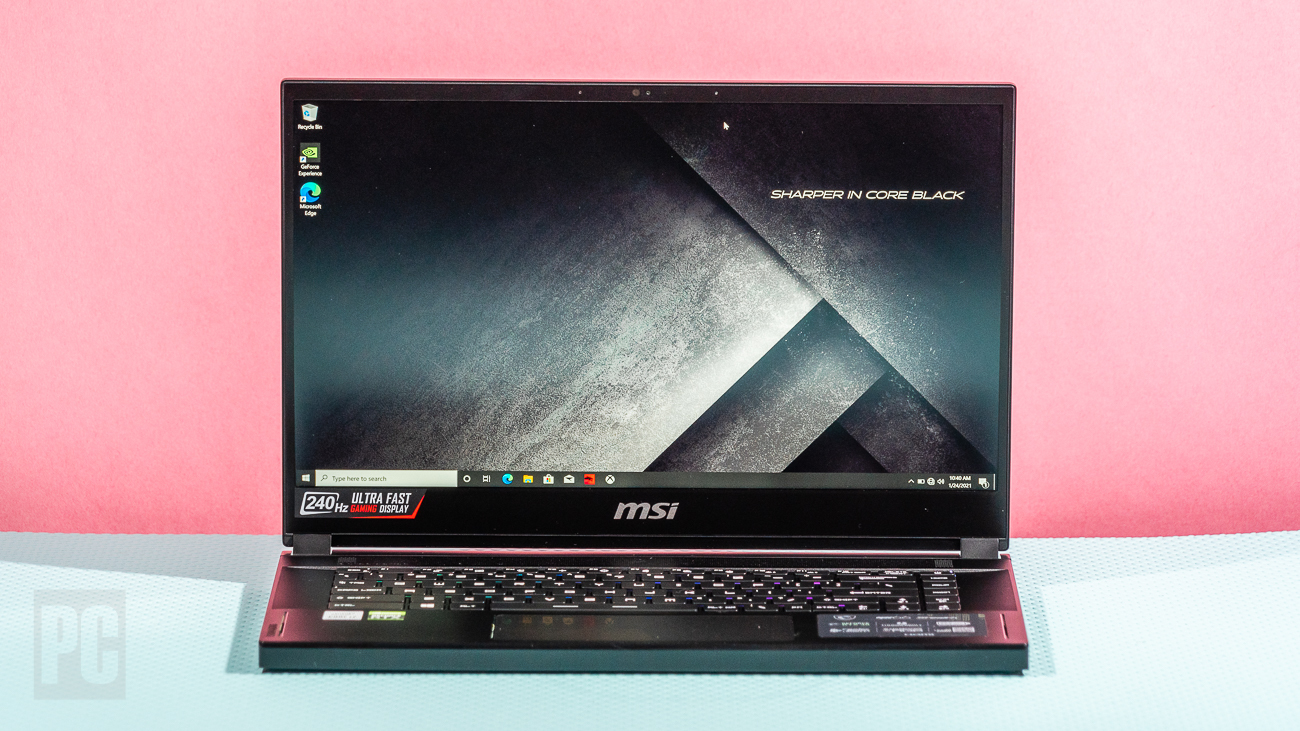 Given the significant differences, think of the GS66 Stealth’s GeForce RTX 3080 as a distant cousin of the desktop card. It has more video memory, but it’s slower GDDR6 with a smaller interface and roughly half the bandwidth. Its boost clock is also much lower, but it’s underrated; according to the utility GPU-Z, it maintained 1,350MHz to 1,400MHz in my 3DMark Fire Strike stress testing.

Naturally, the RTX 3080 Laptop GPU consumes less power than the desktop version. Its total graphics power (TGP, often called “board power”) is just 95 watts in the GS66 Stealth based on my GPU-Z logs. Nvidia says laptop makers can implement the card with up to a 150-watt-plus TGP, so the GS66 Stealth leaves a lot of potential performance on the table with its low rating. (For a lot more on this, see our feature With the GeForce RTX 30 Series, Buying a Gaming Laptop Just Got More Complicated.)

On the upside, the GS66 Stealth’s thin chassis and relatively cool operating temperatures are what you get in exchange for its low-wattage components. Both its GeForce RTX 3080 and its Core i7-10870H CPU topped out in the mid-70-degree C range while gaming. Those are good, low numbers that don’t risk thermal performance throttling.

Outside temperatures fared well, too. Here’s the GS66 Stealth under our FLIR One Pro thermal camera after 30 minutes of playing Shadow of the Tomb Raider… 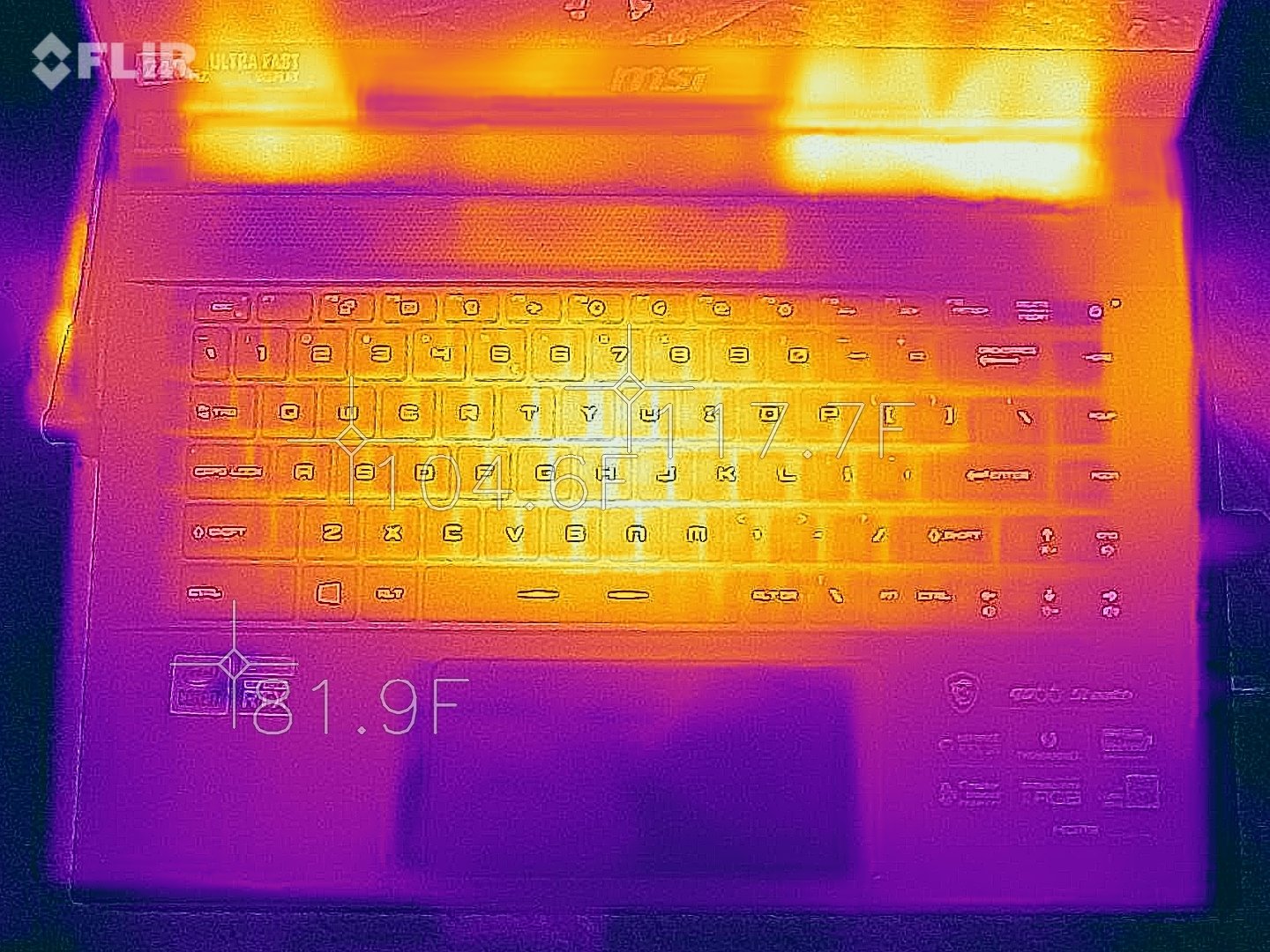 Asus ROG Strix Scar 15 (G533QS-XS98Q). It uses an AMD Ryzen 5900HX chip and has 32GB of memory like the Alienware, but also mixes in a 165Hz QHD screen. It’s heavier and thicker than the GS66 Stealth. Overall, the GS66 Stealth is reasonably priced for its parts.

Now to the benchmarks, where I compared the GS66 Stealth with the quartet of gaming notebooks outlined below… 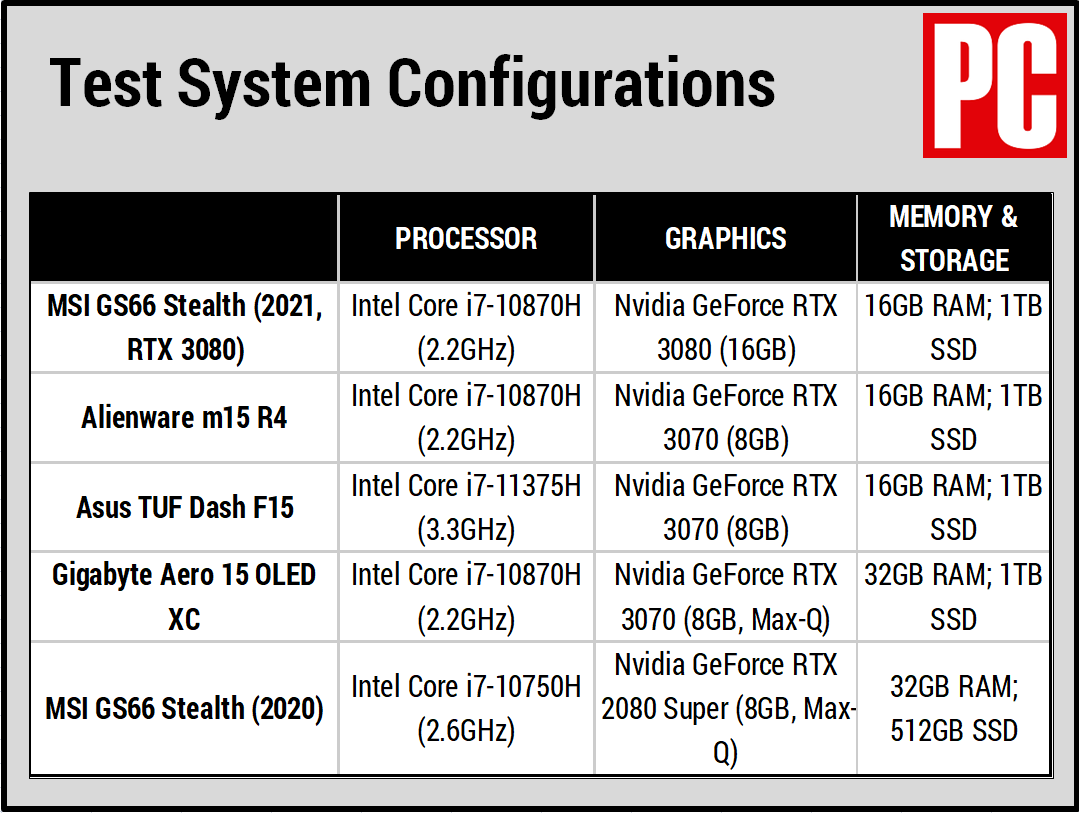 The GS66 Stealth made an impressive 6,175-point showing in our first test, PCMark 10. It simulates different real-world productivity and content-creation workflows; we use it to assess overall system performance for office-centric tasks such as word processing, spreadsheet poking, web browsing, and videoconferencing. It also did at least as well as the others in PCMark 8’s Storage subtest, suggesting its 1TB NVMe SSD has plenty of pep. 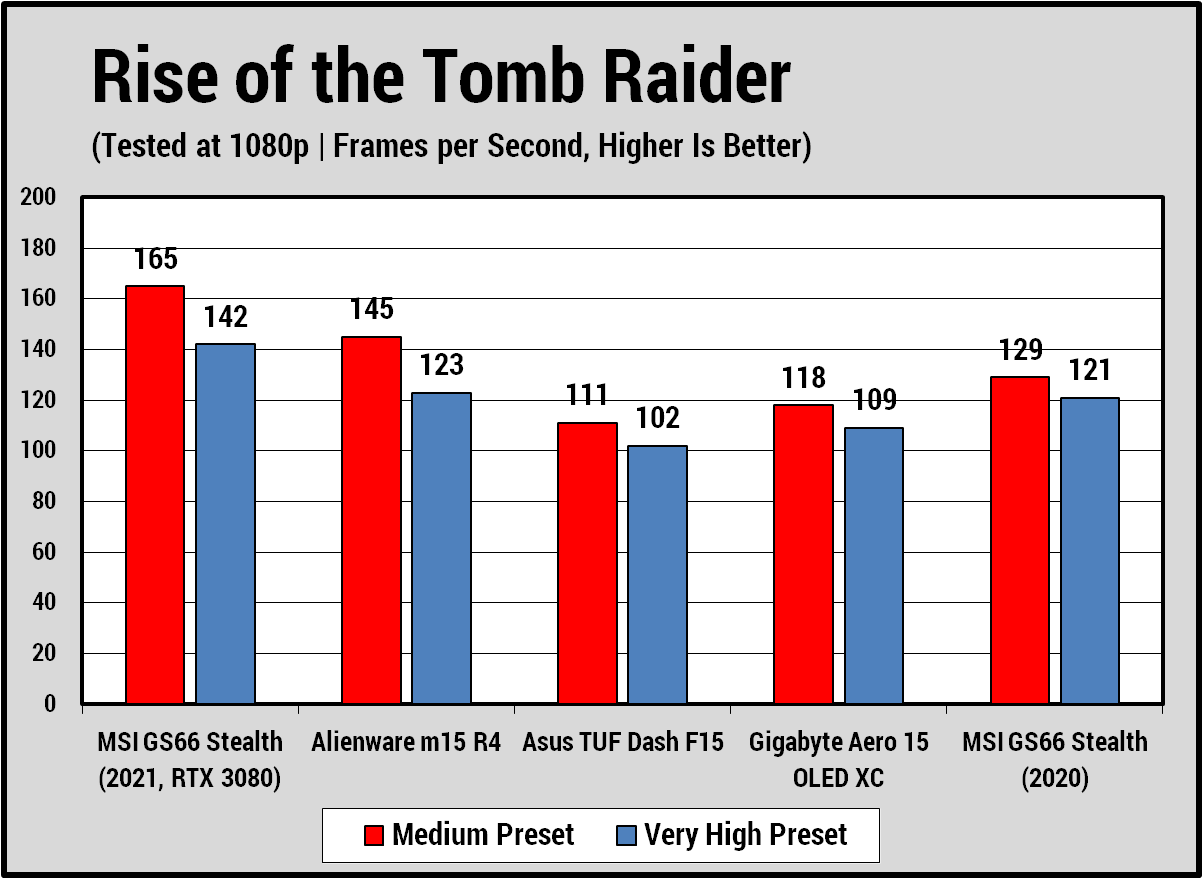 For our last benchmark, we measure a laptop’s unplugged runtime while playing a locally stored video with screen brightness at 50 percent and audio volume at 100 percent. We use the notebook’s energy-saving rather than balanced or other power profile, turn off Wi-Fi, and even disable keyboard backlighting to squeeze as much life as possible out of the system. 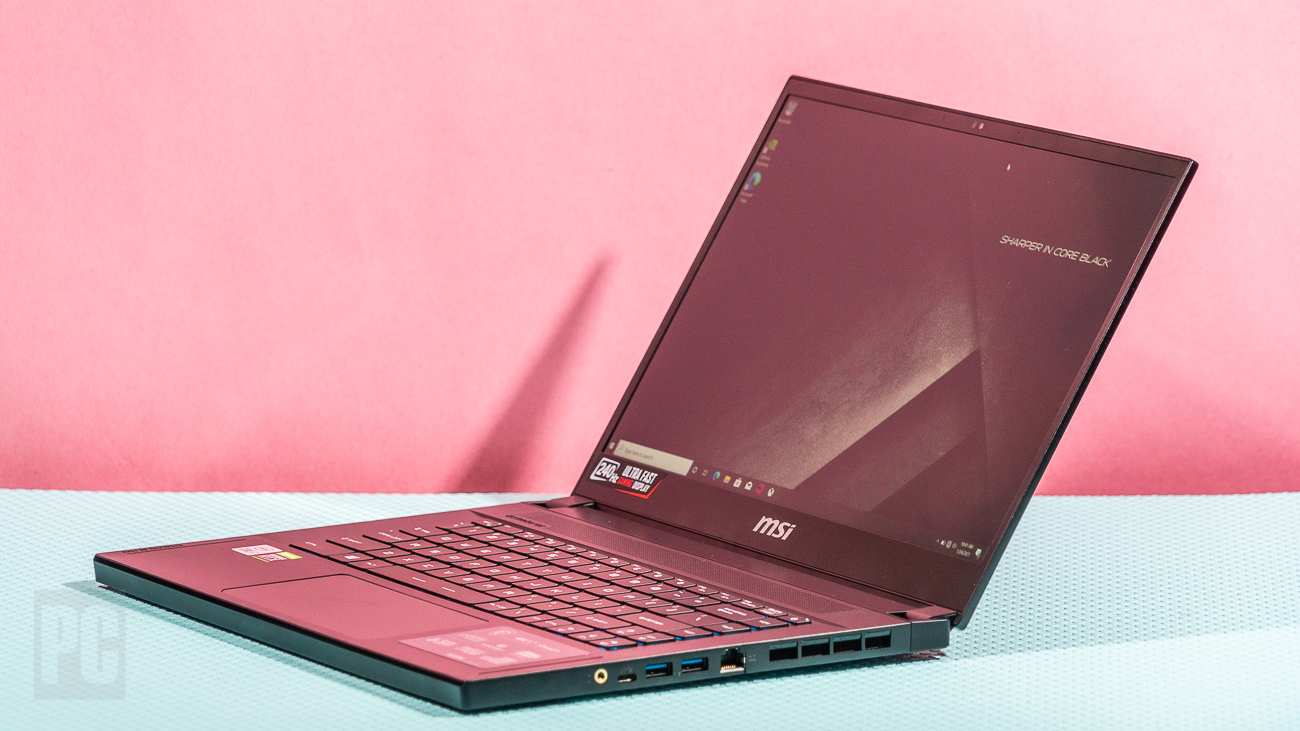