Do you need a lot of power from your graphics card? No, let’s rephrase that: like, a lot of power? Then the MSI GeForce RTX 3090 Suprim X 24G could be the next GPU for you. As a top-of-the-heap power-hungry productivity dynamo, the RTX 3090 Suprim soars, knocking out every productivity benchmark we could throw its way while posting all-time records in gaming tests. But all that power comes at a price ($1,799 MSRP, to be exact), and its performance results alone don’t justify a 150% increase over the perfectly capable gaming beast that is the Editors’ Choice-winning RTX 3080 Founders Edition ($699, if you can find one). That said, for content creators or elite gamers unbound by mortal budgets, you won’t find a more powerful option on the market for the price. This overclocked mega-card does more than enough to justify its place at the top of the top of the stack.

Cards in the RTX 3090 line fall under the same category that used to be occupied by Nvidia’s Titan GPUs in the RTX 20 Series, and the Titan X before that during the launch of 10 Series. These graphics cards, while perfectly capable of gaming, are priced and configured in a way that’s more aptly suited to content-creation professionals than your average gamer.

In the past, cards in this tier of the market would be stuffed with a good deal more VRAM than anything else offered in midrange or even most “high-end” releases (save for unicorns like the $799 AMD Radeon VII, with its 24GB of HBM2 memory), and things are no different this time around. While the RTX 3080 Founders Edition comes with an impressive 10GB of GDDR6X RAM, the RTX 3090 ups that to a whopping 24GB, the same amount as its spiritual predecessor, the $2,499 Nvidia Titan RTX. 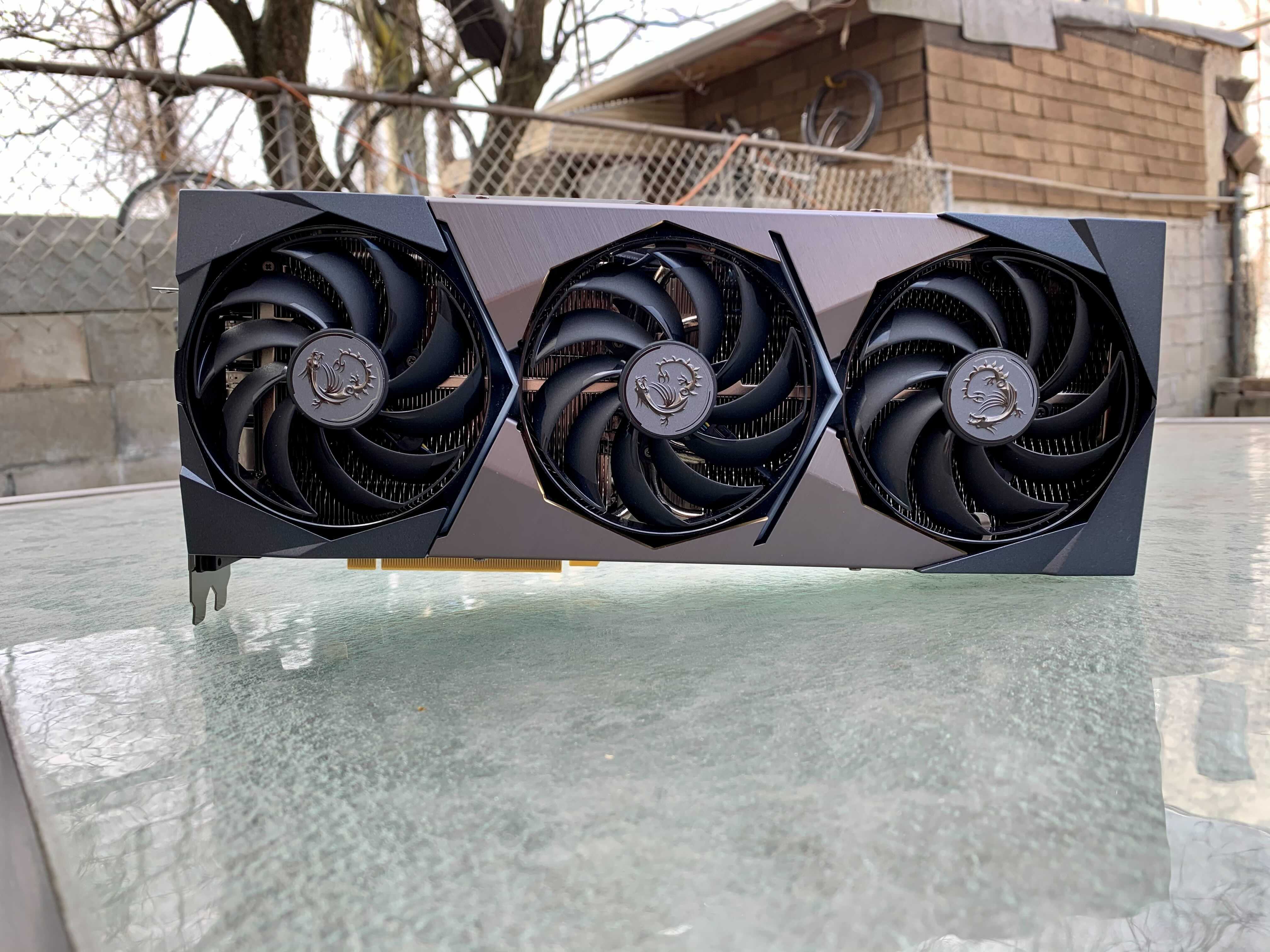 GeForce RTX 2080 Ti set a precedent for GPU pricing at $1,199 for the Founders Edition, and with the RTX 3090 Founders Edition inching up the goalpost to $1,399 (while still using the same GA102 die found in the $699 RTX 3080 Founders Edition), you might think that Nvidia is reconfiguring expectations for what kind of cash gamers need to fork over for absolute top frame rates in their favorite titles. That said, gamers aren’t really the primary target here, despite this card’s big-time gamer look. (Though Nvidia and MSI would surely be happy to sell gamers cards of this caliber, too.) 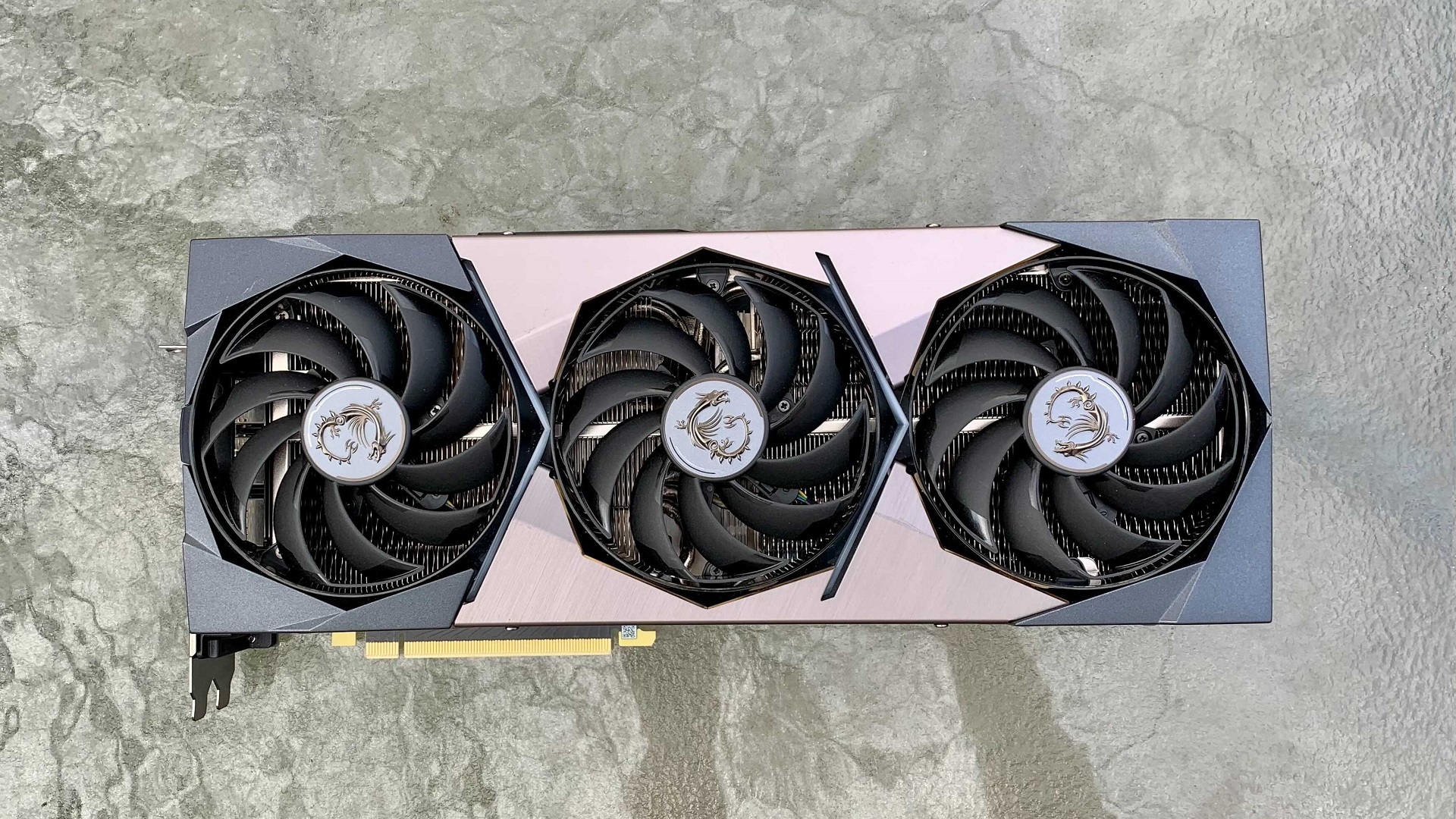 Quadro RTX 8000), which are more often found in a server rack than an RGB-packed gaming tower.

from the website UserBenchmark (grain of salt here, they are “user submitted,” after all), the RTX 3090 regularly outpaces the latest and greatest Quadro RTX 8000 in both performance and overall value by a strong margin. (Various benchmark results submitted by users include gaming-focused runs like MRender, which tests a GPUs ability to use render target arrays and geometry shaders in Direct3D, as well as NBody, a particle physics simulation that tests how quickly the card can calculate gravity values between thousands of individual points in space.)

Last December, Nvidia quietly rolled out its $4,650 A6000 line of GPUs, part of a stack that could be called “Quadro” by any other name. The A6000 is focused on enterprise buyers exclusively, and with stock situations being what they are for the RTX 30 Series, it’s likely that getting your hands on these workhorses would be even harder than winning a Newegg component lottery. 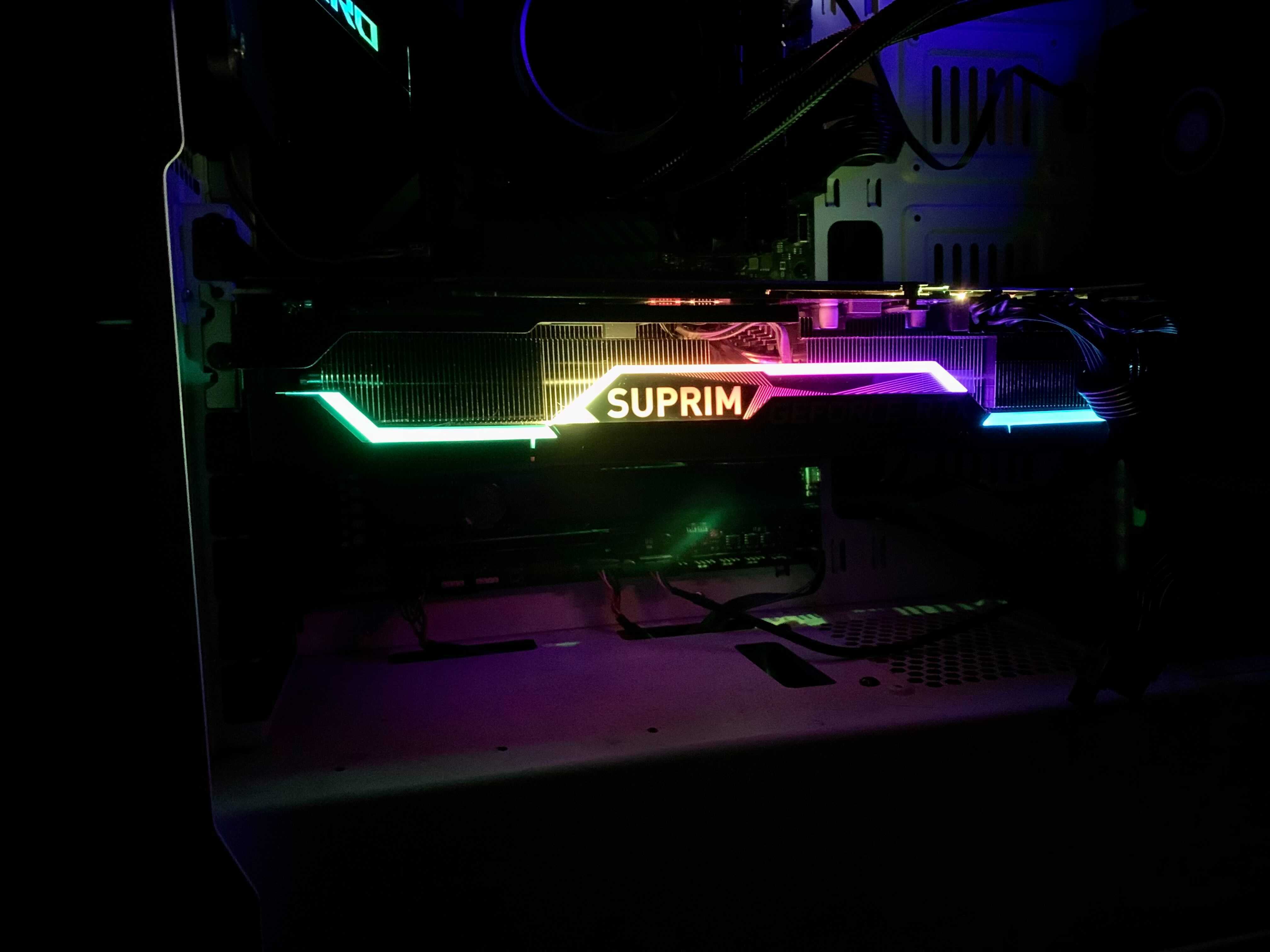 Dragon Center Software, which contains myriad ways to customize your Suprim to fit your RGB preferences (if you have such urges at all, of course).

On the top of the card, I found an NVLink connector, a rare find in the RTX 30 Series these days. Nvidia hasn’t completely scrapped the idea of dual-card solutions just yet, and sensibly the company has left the technology as an option only in the RTX 3090 class of cards. Though there are a few games out there that know how to take advantage of two graphics cards linked up through either NVLink or the aging SLI standard, the best usage case for NVLink these days is in productivity and content-creation tasks, which is exactly what the RTX 3090 was designed for. We didn’t have another identical RTX 3090 on hand to test the feature, though. RTX 3090s, like every other high-end graphics card in the world right now, aren’t easy to come by.

MSI GeForce RTX 3080 Gaming X Trio 10G requires three eight-pin connectors to boot up. MSI doesn’t sell an adapter with this card the same way Nvidia has packaged 12-pin converters with its RTX 3090 Founders Edition, so make sure you have a PSU that can support this card as well as all the necessary cables before you hit the buy button. 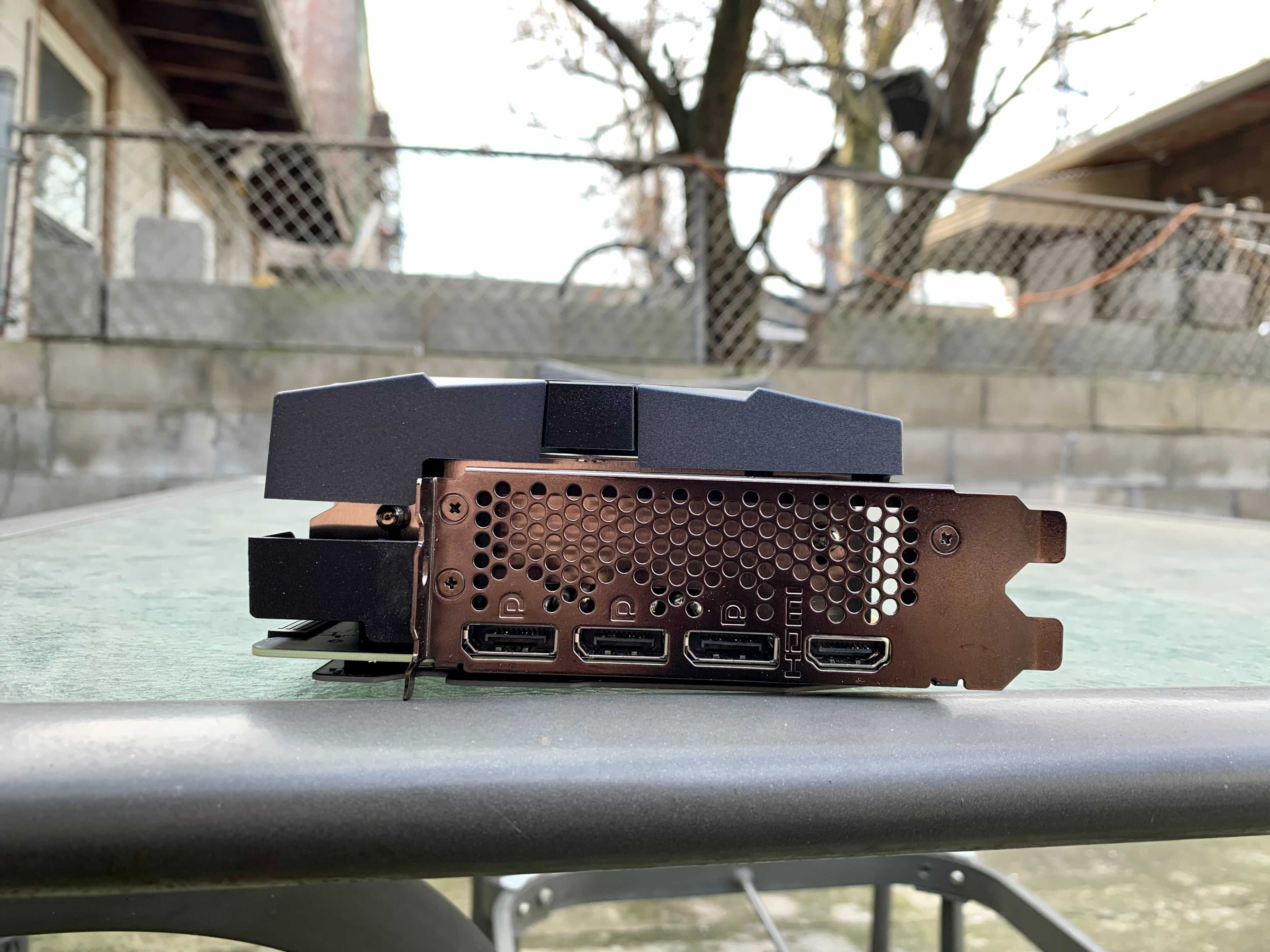 Intel Core i9-10900K processor, 16GB of G.Skill DDR4 memory, a solid-state boot drive, and an Asus ROG Maximus XII Hero (Wi-Fi) motherboard. All cards below were tested on this rig. Given our tests with the Core i9-10900K and recent Ryzen 9 CPUs, this rig is the best reasonable configuration of the moment in 2021 to cut the CPU out of the equation for frame rates. (Read more about how we test graphics cards.)

For our testing, we focused some of the effort on the esports aspect of the Nvidia GeForce RTX 3090 with games like Counter-Strike: Global Offensive (CS:GO) and Rainbow Six: Siege. We also ran the card through the rest of our standard benchmark regimen, which tests a card’s abilities to handle AAA games at the highest possible quality settings, as well as how it rides during synthetic benchmarks that stress the card in a variety of ways.

the RTX 3070 Founders Edition, which we at PC Labs consider the sweet spot for high-refresh 1440p gaming these days.

Cards based on the GA102 die are already pushing these engines to their limits, and a 13% gain in Rainbow Six frames (especially at 400fps-plus, faster than even the fastest monitors), isn’t going to make or break getting the critical headshot in your next round. Plus it definitely isn’t worth the nearly 140% difference in price between the RTX 3090 Suprim and MSI’s RTX 3080 Gaming X Trio 10G. Unless you’re an esports star making millions of bucks, a lesser RTX card will do for these kinds of games.

Testing Results: How About Some Legacy AAA Titles?

We also ran some quick tests on some oldies-but-goodies that still offer the AAA gaming experience. These legacy tests include runs of Hitman: Absolution, Tomb Raider (2013), and Bioshock: Infinite, the last being a game that has no business still being as well optimized as it is here in 2020.

Legacy titles, like multiplayer games, are more of a flex than anything else for cards at the level of the RTX 3090…but that doesn’t mean we still don’t want to see it roll its sleeves up a little.

Depending on the game, there were either clear ceilings where neither the RTX 3080 nor the RTX 3090 could go much further, and others like Bioshock: Infinite, which will take every ounce of power you throw its way and translate it into record after record. Again, the RTX 3090 is way over the limit for what you should be paying if all you plan to do is play games that came out several years ago. But it’s still nice to know that if you wanted to go that hard in the paint, the option is there.

Overclocking and Thermals: Too Close to the Sun?

We ran a 10-minute stress test in 3DMark Port Royal on the MSI GeForce RTX 3080 Gaming X Trio 10G, and the card peaked at a temperature of 81 degrees C. This makes the MSI Geforce RTX 3090 Suprim X 24G the hottest RTX 30 Series card we’ve tested thus far, though that result is expected, given the added power hiding inside.

Though we’ve been able to pit the RTX 3080 Founders Edition against several third-party RTX 3080 cards since they originally launched in November, right now we have no point of comparison on heat or noise for the RTX 3090 Suprim. That said, for such an intimidating card on the outside, once we had it installed in the rig, it barely made a peep, even during the most intense scenarios. 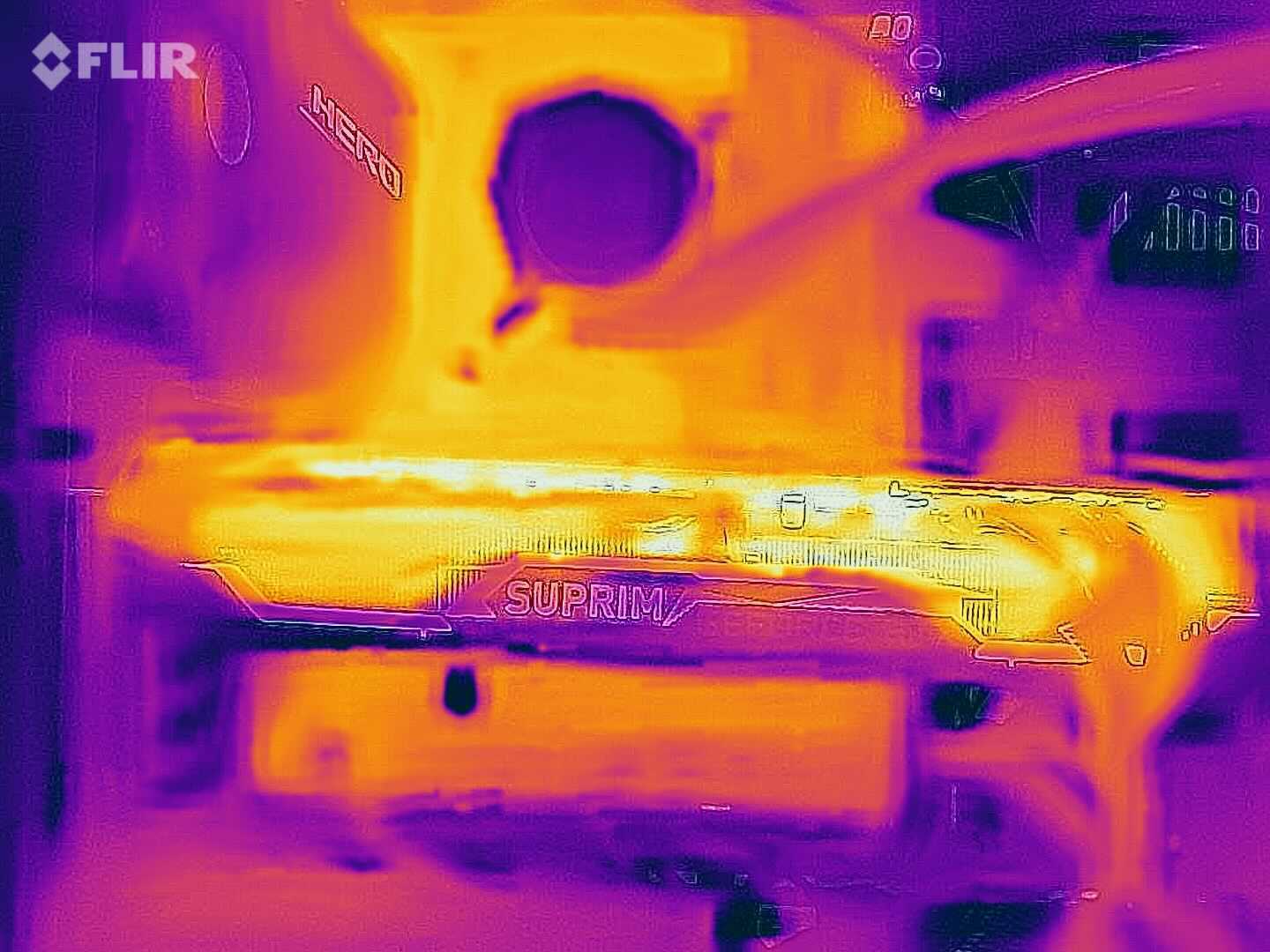 EVGA’s Precision X1 utility, I achieved a small, but stable, boost of 110MHz on the boost clock and 150MHz on the memory clock. However, this roughly 6% gain in clock speed didn’t translate to more than 1% gains in Far Cry 5 or Rainbow Six: Siege. LuxMark runs returned similarly slim gains, so the ceiling applied equally whether we tried to run gaming or content-creation benchmarks. This card was pretty well pushed to the max straight from the box.

The Best You Can Get, If You Can Find—and Afford—It

Right now, the MSI GeForce RTX 3090 Suprim X 24G is the best card built for the specific job it’s meant to handle. And considering that AMD’s Radeon VII is nearly two years old at this point (plus outside benchmarks which show the $999 Radeon RX 6900 XT doesn’t hold a candle to the RTX 3090, nor should it considering their price differences), the likelihood of it remaining uncontested at this level remains strong.

If you are strictly a gamer and only care about playing games: Please don’t buy an RTX 3090, unless you just won the Mega Millions. And we mean that in the “for the greater good” sense. Stock of every Nvidia card is strung as thin as it can go as of this writing (January 2021), and that situation only looks to be getting more dire as to when Nvidia claims the supply will keep pace with demand.

Content creators, designers, virtual effects artists, and any other of the dozens of creative and industrial careers that can put the brawn of the RTX 3090 to use at its best work deserve to have their card too. So at least until the stock levels catch up, we can’t in good conscience recommend this card strictly as an option for gamers who want 2.9% more frames than an RTX 3080 in Assassin’s Creed: Odyssey at 4K resolution. 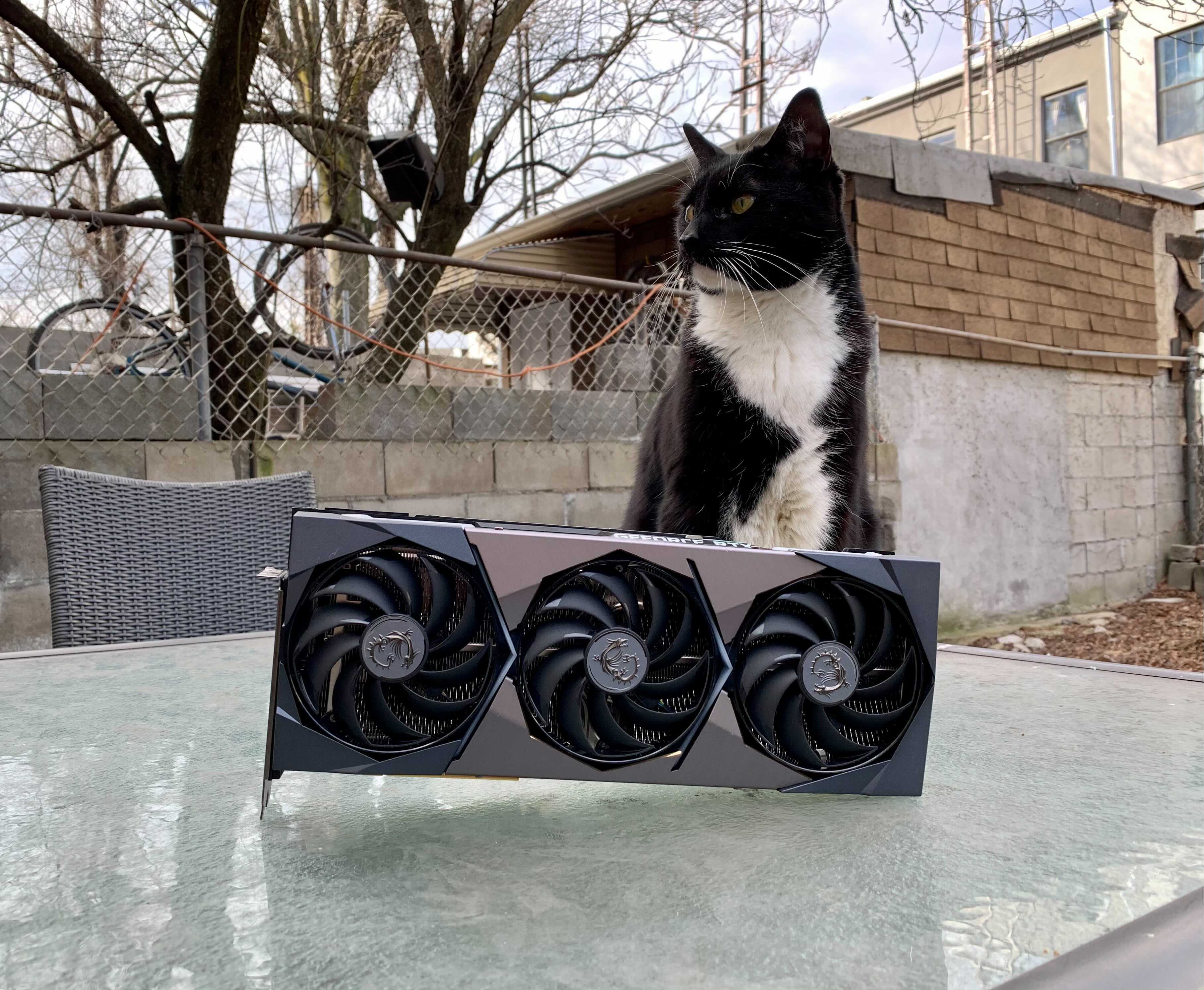 Are you the progeny of an oil baron with $1,799 burning a hole in your pocket? Then, hey, go for it: The MSI RTX 3090 Suprim X 24G is the fastest graphics card we’ve ever tested for gaming, full stop. But if you’re like the rest of us, an RTX 3080 Founders Edition will handle the job almost as well for less than half the cost (at retail). We don’t know how either cards will be affected by the incoming tariffs, nor the continuing stock situation, but all we can say is this: Don’t buy an RTX 3090 for gaming in desperation, just because it’s there. Leave that stock for the people who need it to create, and start mashing that F5 button on the page for any number of other RTX 3080 models instead.

For those creators and builders, though, your top card just got a whole lot more powerful…and, yes, it games like a city-stomping monster, to boot.