We’ve reviewed a lot of true wireless earphones, but only a handful of them have been earbuds. The Microsoft Surface Earbuds are aptly named, as they don’t seal off your ear canal the way earphones do. The design looks cool and fits quite well, but without a proper ear canal seal, audio balance can be easily compromised, which negatively impacts the stereo image, making one ear seem much louder than the other. Sound quality is rich and crisp when a perfect fit is achieved, but more often than not, the ear-to-ear audio will be inconsistent. Ultimately, for $200, there are plenty of earphones that sound better than the Surface Earbuds, and many of them offer useful extras like apps with EQ, noise cancellation, and stronger water-resistance ratings.

Available in gray or off-white models, the Surface Earbuds feature an interesting earbud design: The outside control panel is a full, flat circle, while behind the circle, the earpiece is large enough to make contact with your ear for extra stabilization. This is important because, with no canal seal, earbuds need all the stabilization they can get. The Surface Earbuds ship with three pairs of sleeve-like covers that guide the nozzle of the earbud toward the ear canal, but the nozzle merely sits outside of it. And yet, the fit is impressively secure—these earbuds should stay in place during moderate exercise.

The earbuds are shaped so that they ostensibly can only be placed in the ear in one way, and that should theoretically help aid in solving some of the potential audio consistency issues. But like all earbuds, without an actual ear canal seal, there’s still enough possible movement to create notable ear-to-ear audio problems. We’ll discuss this more in the next section on audio performance. 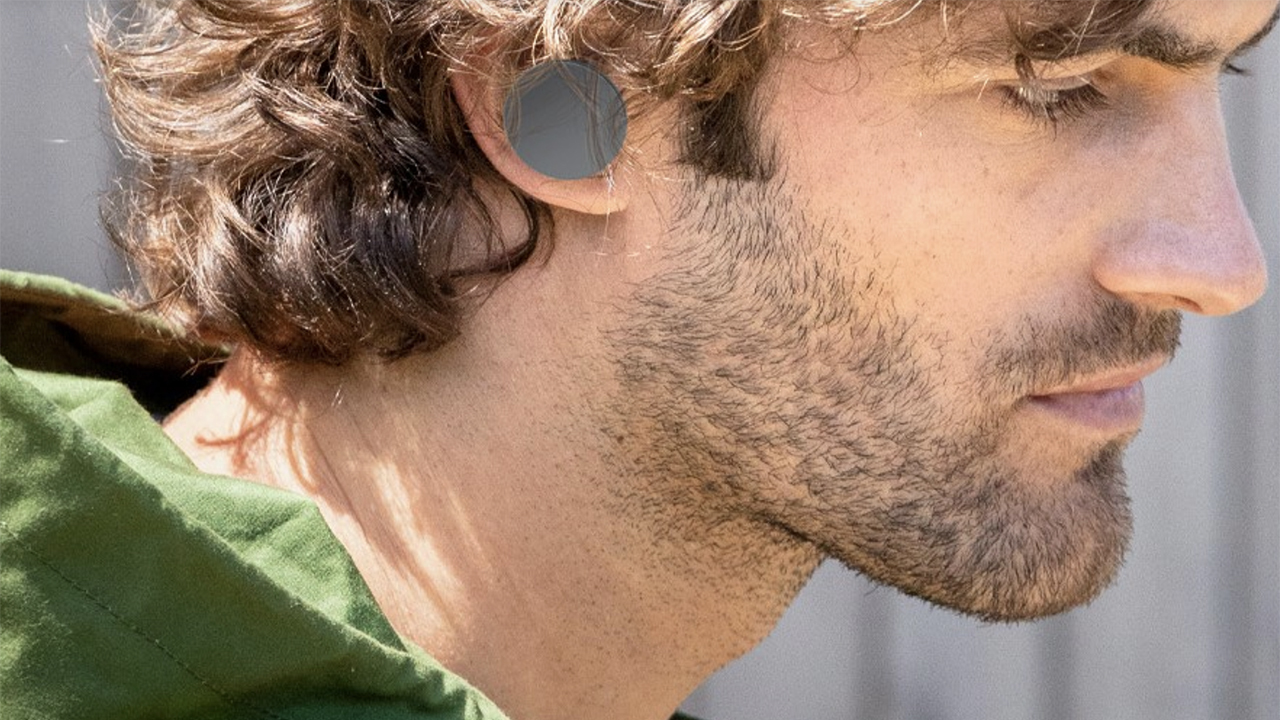 IPX4 rating as the Apple AirPods Pro, a modest rating that means the earpieces are protected from light splashes and misting. You can wear them in the rain, but don’t rinse them off under a faucet—and don’t place wet earbuds in the charging case, to which the water-resistance rating doesn’t apply.

The charging case is compact, with a matte surface like the earbuds, and a flip-top lid. The included USB-C-to-USB-A charging cable is of generous length, and connects to the case’s rear panel. Inside, the earbuds drop into place and, when docked, look like no others we’ve tested to date—perfect circles that sit nearly flush with the top surface of the interior. There’s just enough of the top panels protruding to make it easy enough to grab an earbud and remove it.

Microsoft estimates battery life to be roughly eight hours, with an additional 24 hours in the case, but your results will vary with your volume levels.

The Surface Earbuds are compatible with Bluetooth 5.0 and support AptX and SBC Bluetooth codecs, but not AAC. They offer one-click pairing with Surface devices and Windows 10 PCs via Swift Pair, and standard Bluetooth pairing for everything else. They also support dictation in Microsoft Outlook and Word, though you can essentially do this with any device with a microphone.

Each earbud houses a 13.6mm driver that delivers a frequency range of 20Hz-20kHz. On tracks with intense sub-bass content, like The Knife’s “Silent Shout,” the Surface Earbuds deliver a solid low-frequency presence. There’s a decent sense of deep bass at times, but at top volumes, the drivers can distort on this track, which should never happen in the $200 range. It’s also easy to get a different ear-to-ear audio experience, so even if the listening experience implies solid bass depth, each ear isn’t necessarily getting the same amount of bass, which can be disorienting.

Bill Callahan’s “Drover,” a track with far less deep bass in the mix, gives us a better sense of the Surface Earbuds’ general sound signature. Callahan’s baritone voice is given plenty of added low-mid richness, which is balanced out by crisp high-mids and highs. But the drums on this track—which can sound overly thunderous on bass-forward in-ears—sound like small Tupperware containers being lightly thumped with a paintbrush when the in-ear fit is off, and somewhat more robust when the fit is ideal. The problem is, it’s really easy to place the Surface Earbuds securely in your ear and achieve a notably different ear-to-ear audio balance. This affects bass response, the balance of the mix…everything. In a vacuum, or with the ideal ear placement, the earbuds sound pretty good, but not $200 good.

See How We Test Headphones

On Jay-Z and Kanye West’s “No Church in the Wild,” the kick drum loop receives enough high-mid presence to retain its punchy attack, while the vinyl crackle and hiss are brought forward a bit in the mix. The sub-bass synth hits that punctuate the beat are delivered without much of their deep bass power—the drum loop itself packs more of a bass punch, which sounds fine, but isn’t quite the experience you’d have on more accurate in-ears. The vocals are delivered cleanly and clearly without much added sibilance. This is a bright sound signature with some solid bass depth, but the truly deep lows are dialed back significantly—without an ear canal seal, it’s nearly impossible to recreate subwoofer-like lows. The drivers fared better with the slightly higher deep-bass challenge of the first track we discussed, from The Knife—alas, at high volumes, that victory ended in distortion.

Orchestral tracks, like the opening scene from John Adams’ The Gospel According to the Other Mary, can sound a bit too bright, as if the sculpting in the high-mids and highs is pinching certain parts of the frequency range. The bass response comes through here, adding some subtle depth to the experience, but this isn’t really a natural sound, even if you get the ear-to-ear fit perfect. It’s highly sculpted, which is common, but with odd things happening in the highs.

Finally, there’s the open design, which might appeal to some during exercise—with no canal seal, the Surface Earbuds let in plenty of noise surrounding you. There’s no need for an ambient aware listening mode since you’re always in it, and you will easily hear loud noises along with whatever you’re listening to, unless you really blast the volume.

The two-mic array offers average intelligibility. We were able to understand every word we recorded, but the audio has typical Bluetooth distortion in the mix. The mic signal is never faint, however. On a solid mobile connection, callers should be able to understand you without issue.

Surface Earphones Would Be Better

The problem with the Microsoft Surface Earbuds is the same problem with the standard AirPods (not the Pro model mentioned above) and every other pair of earbuds we’ve tested: Earbuds don’t provide high-quality audio. They provide convenience and awareness of your environment, but audio isn’t the priority.

Simply put, it’s hard to justify the $200 price for the Surface Earbuds. The design is visually interesting, but the controls can be annoying, and the audio experience isn’t in line with the price. It’s worth spending an extra $50 on the AirPods Pro, which actually do seal off the ear canal and add top-notch active noise cancellation to the mix. Outside of the Apple realm, the $230 Jabra Elite 85t earphones have the same level of water resistance but also an excellent app and far superior audio quality, the $200 Sennheiser CX 400BT earphones aren’t water resistant but sound fantastic, and the $170 JBL True Wireless Flash X earphones are fully waterproof and sound better than the Surface Earbuds.