High-end Android tablets are a bit of a rarity in the market. Apple has had success with its iPad Pro, aimed firmly at the creative community, while most Android tablets are a bit more pedestrian, offering relatively basic functionality at a good price. The Samsung Galaxy Tab S7 is therefore a bit of a rarity; it’s likely the highest-end Android tablet on the market and offers a mix of a very responsive tablet for drawing and the option of using it more like a desktop.

I’ve used it a lot over the past few weeks, and found a lot I liked, but also a number of things that made me question whether this was really a machine for me.

The display is nice with a 120Hz panel that makes scrolling very smooth. You can set it to 60Hz for better battery life, but I doubt most people will do this. The faster display not only makes scrolling faster, it decreases the latency when using the included stylus. You can also choose between Vivid and Natural colors and set the white balance. The Vivid mode makes colors pop, and it’s great for looking at web pages and the like. The Natural mode makes more sense when you’re editing photos or working with videos. 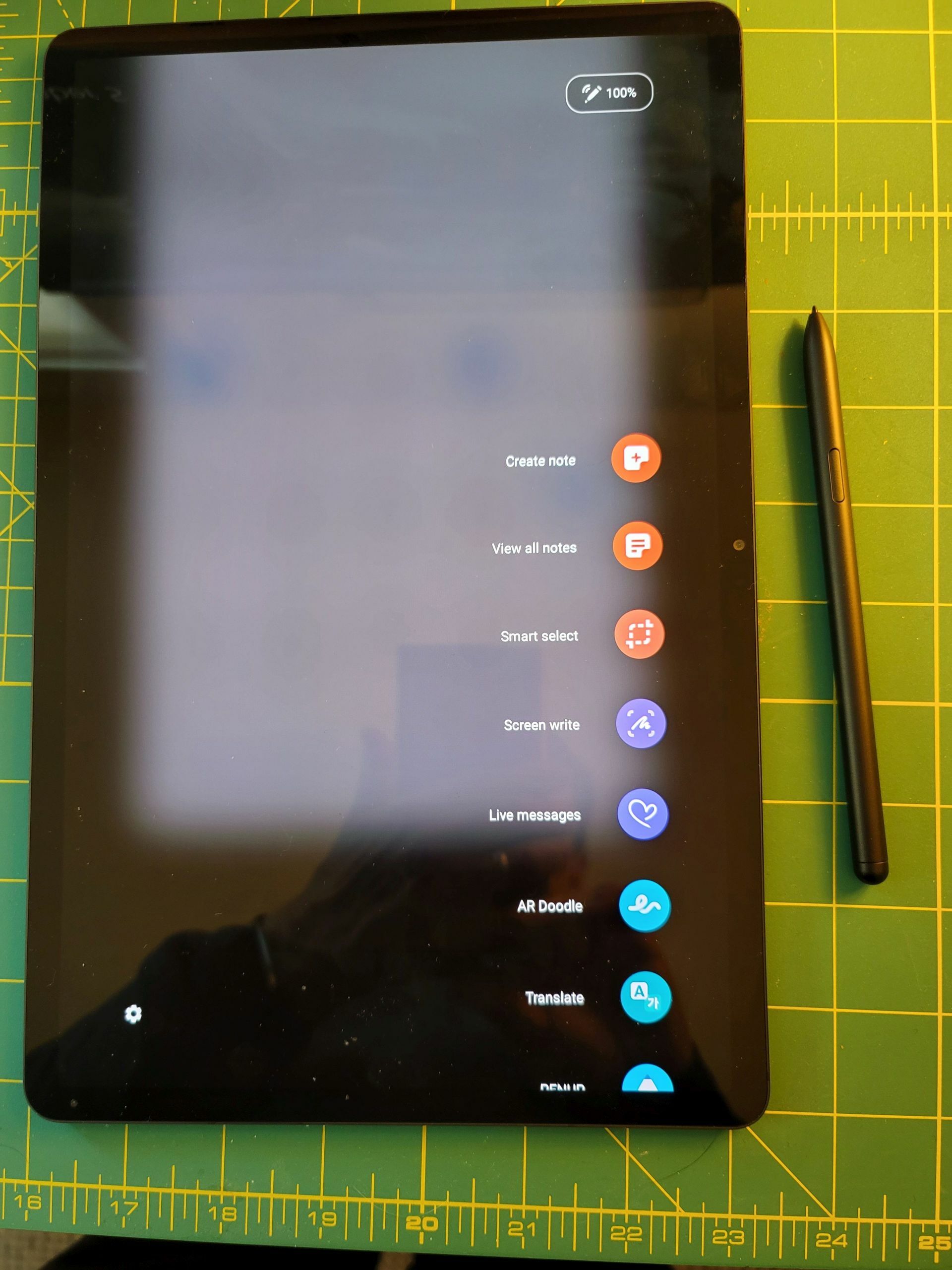 Samsung Galaxy Note 20 Ultra. With Notes, you can not only write or draw, but also convert handwriting to text, sync audio to your written notes, and now import a PDF file for annotation, which I found to be very nice. You can also sync notes between the Tabs S7 and the Note; and the Tab S7 has a new folder system, which made it easier to file and to find your notes.

The S Pen also is handy for just general use, for things like capturing part of a screen; translating words on a page; controlling presentations with PowerPoint; or for advancing or pausing music or movies. There are several new S Pen gestures to select items and move home and back. These are supposed to make some of this a little easier, but in general, I found myself just tapping the screen to bring up a menu for a lot of this instead of trying to flick my wrist in a particular way.

Adobe offers a variety of applications for both the iPad and Android, and the Android versions worked well on the S7 . I was especially happy with Adobe Sketch—I’m no artist, but I thought it worked particularly well with the S Pen. In general, all the pen applications I tried worked well.

Another way you can use the Tab S7 is as the equivalent of a laptop computer, by using an optional keyboard ($229.99) which comes in two parts: a keyboard that snaps in front, and a back that acts both as a cover and as a place to hold the S Pen when it isn’t in use (and recharges the pen as it rests there). This seemed like a nice arrangement, and one that worked well for me.

The keyboard has a good range of function keys and a serviceable trackpad. Like most tablet keyboard covers, the keys don’t have much travel, but in quick usage, it was just fine. When the keyboard is plugged in, and you use the tablet in horizontal mode, it automatically gives you Samsung’s Dex environment, which is a more desktop-like experience. If you want, you can plug it into a monitor through the USB-C port, although when you do this the monitor on the tablet itself shuts off. Samsung says a future update will support multiple screens. In addition, there’s a new wireless feature that lets you stream your applications to a monitor that supports the Miracast standard, with Samsung pointing to its TVs from 2019 onward. Unfortunately, I didn’t have such a TV to test this with. 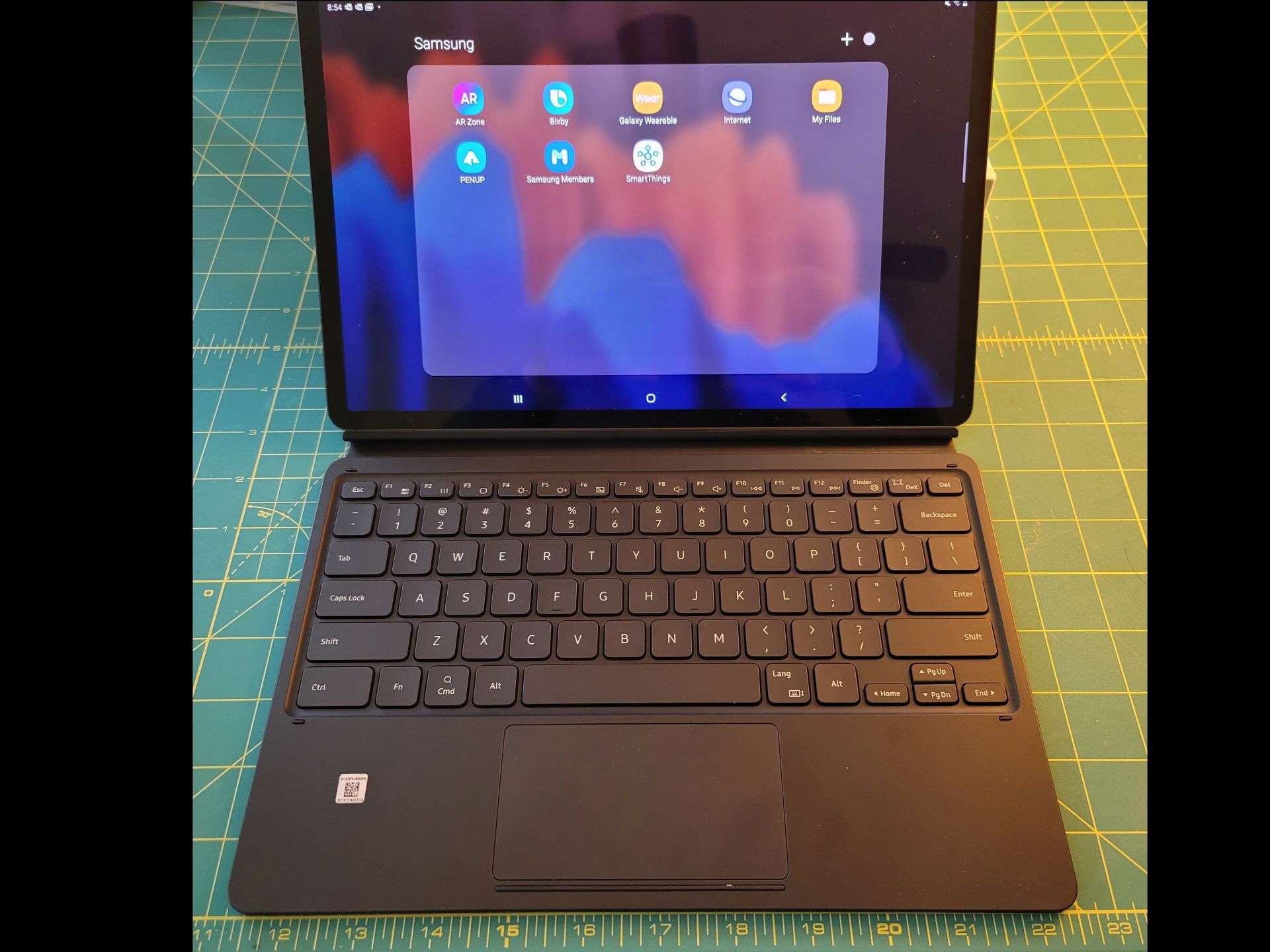