KFC trolls Sony and Microsoft with its own hilarious gaming console

As if fans trolling the PlayStation 5 and the Xbox Series X wasn’t enough, KFC decided it wanted to climb aboard the bandwagon, too. The fast food chain posted a hilarious video on social media featuring the reveal of its own “gaming console” in an attempt to take a sly dig at Sony and Microsoft.

Posted on June 12 on Twitter, the video shows off the KFConsole, an intriguing gaming device that has more to it than meets the eye. It looks like an actual gaming console, complete with a power button, a disc drive, and red lights. The video also proceeds to tell us that the console has cross-platform compatibility.

Things take an absurdly hilarious turn, however, when the video indicates the presence of a “chicken chamber” in the KFConsole, which is basically a red-glowing BBQ grill that will allow gamers to cook some chicken when they feel hungry.

KFConsole has a release date of November 12, according to the video, which means that we can expect some kind of follow-up joke in the future.

So, how did fans react? Surprisingly enough, it was hard to figure out at first if this was a clever hoax or if KFC was deadly serious. After all, the fast food giant definitely has a thing for gaming. Its Gaming Twitter account has over 123.6k followers, while its Gaming Instagram account boasts 66.6k followers. In fact, they even launched a real dating sim game called I Love You Colonel Sanders Dating Simulator Game back in 2019. The things they will do to sell their fried chicken, eh?

Fans had a lot to say about the faux console, and KFC was quick to come up with witty responses.

One curious gamer wondered what kind of gaming titles it would support, to which KFC replied, “You know it,” along with an image of KFC’s I Love You Colonel Sanders Dating Simulator Game. 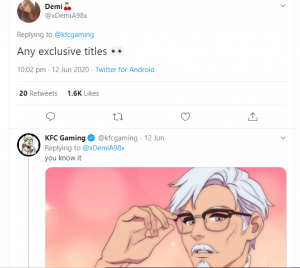 Another Twitter user joked about the console’s storage, and KFC had a witty response for this one, too. 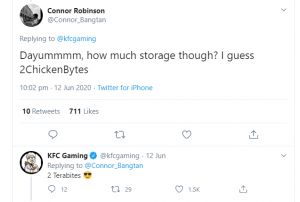 Even Xbox couldn’t help but comment. “Can you lay it sideways?” it wondered, referring to the memes that have been made on the designs of the PS5 and the Xbox X series.

The post KFC trolls Sony and Microsoft with its own hilarious gaming console appeared first on TechJuice.