The hackers have been taking over the accounts to encourage the public to donate Bitcoin to a digital wallet, which has collected over $110,000 in funds. 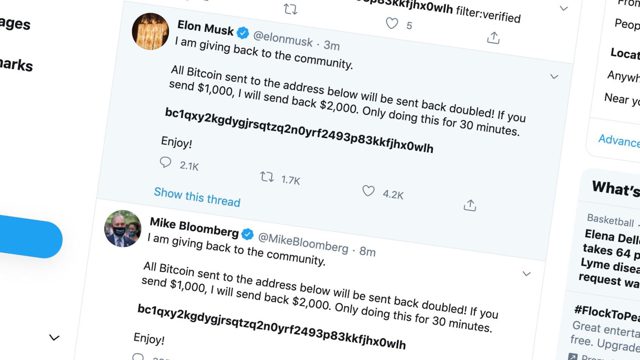 The mysterious culprits then took over the accounts of numerous celebrities, including Barack Obama, Amazon CEO Jeff Bezos, and Kanye West, to further promote the scam. “I am giving back to my community due to Covid-19! All Bitcoin sent to my address below will be sent back doubled. If you send $1,000, I will send back $2,000!” the tweets read.

In response, Twitter tweeted at 5:45 p.m. ET: “We are aware of a security incident impacting accounts on Twitter. We are investigating and taking steps to fix it. We will update everyone shortly.”

In the meantime, the widespread hacking is raising speculation that a login system at Twitter or a third-party provider contains a vulnerability, which the mysterious culprits are exploiting. The attackers appear to be going back to certain accounts to post the message again; it’s appeared on Elon Musk’s feed multiple times, for example.

Tyler Winklevoss, CEO of cryptocurrency exchange Gemini, said the hackers were able to breach its Twitter account, despite having the two-factor authentication enabled.