Competing directly with our recent Editors’ Choice from Lexmark, the MC2535adwe, HP’s Color LaserJet Pro MFP M479fdw ($599.99) is a midrange all-in-one color laser printer designed for use in a small-to-midsize office or workgroup. Like most HP lasers, this one churns out good-looking documents, though it’s not the fastest and its running costs are a bit on the high side. The M479fdw is a solid performer overall, but there’s nothing unique or exciting enough about it to set it apart in today’s broad and highly competitive market for midrange color AIOs. Even so, if your monthly print and copy volume is moderate—say a thousand pages or fewer—this surprisingly compact LaserJet should serve you well.

The M479fdw measures 15.7 by 16.4 by 18.6 inches (HWD) and weighs 51.6 pounds. It’s far from featherweight, but that’s somewhat smaller and lighter than most competing laser AIOs. The Lexmark MC2535adwe mentioned above, for example, is a few inches wider and longer and weighs about 8 pounds more. Canon’s Color imageClass MF746Cdw and MF741Cdw are both taller and wider, as well as a few pounds heavier. In contrast, though, Epson’s 2019 WorkForce Pro WF-C5790 Color MFP Supertank, an inkjet-based laser alternative, has a similar footprint and weighs about 10 pounds less.

With printers in this class and price range, you get not only a fairly robust machine but also a strong feature set. For example, the HP comes with a 50-sheet single-pass auto-duplexing automatic document feeder (ADF) for sending two-sided multipage documents to the scanner. Of the four competitors listed in the previous paragraph, only the Canon MF741Cdw lacks an auto-duplexing ADF. Instead, its feeder requires you to flip two-sided documents by hand to capture the second sides. 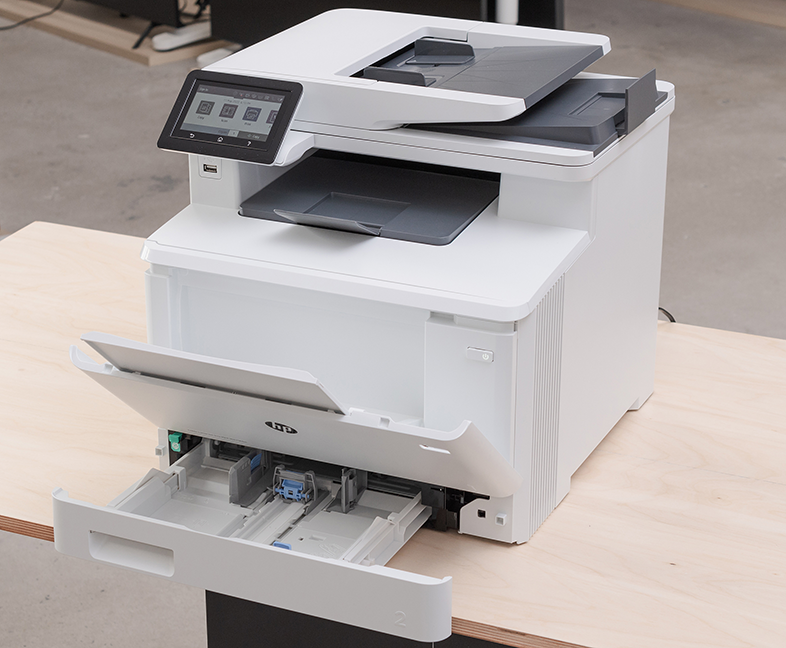 The M479fdw’s standard connectivity consists of Gigabit Ethernet, 802.11b/g/n Wi-Fi, USB, and Wi-Fi Direct, the last being a peer-to-peer protocol that allows you to connect mobile devices to the printer without either them or it being part of the same network. In addition to Wi-Fi Direct, other mobile connectivity options include Apple AirPrint, Google Cloud Print, HP ePrint, HP Smart App, Mobile Apps, and Mopria. 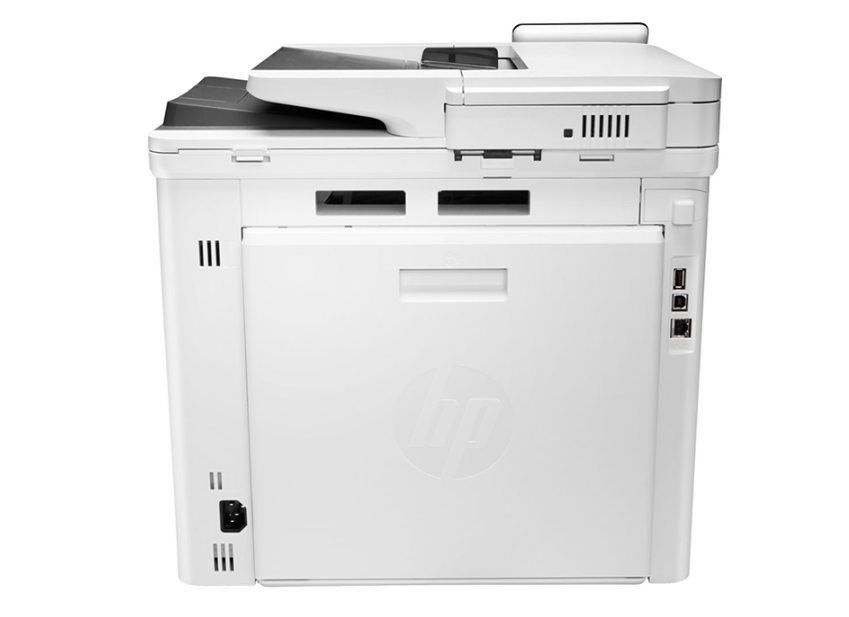 HP rates the M479fdw at 28 pages per minute (ppm), a middle-of-road print speed for this level of AIO and the same rating as the Canon MF741Cdw and MF746Cdw. The Lexmark MB2535adwe, on the other hand, is rated at 35ppm, and the Epson WF-C5790 at 24ppm. I tested this HP (and all these other machines) over an Ethernet connection from our standard Intel Core i5 testbed running Windows 10 Pro. (See how we test printers.)

Like the Lexmark and Canon machines discussed here, the M479fdw comes out of the box configured to print two-sided (duplex) pages. In these scenarios, we time and record both the printer’s one-sided (simplex) and two-sided performance. With that said, the M479fdw printed our first test, a 12-page Microsoft Word document, at the rate of 22.1 images per minute (or ipm, where each page side counts as an image) and 31.4ppm—3.4ppm quicker than its rating.

The Lexmark MB2535adwe’s duplex score is about 5ipm slower, while its simplex showing is 8.4ppm faster. The two Canons’ scores were similar to the LaserJet’s. The Epson does not default to duplex, so we recorded only its simplex scores: It came in about 5ppm behind the HP.

For the next part of my tests, I clocked the M479fdw as it cranked out our collection of Adobe Acrobat PDFs, Excel spreadsheets and corresponding full-page graphics, and PowerPoint handouts containing complex business graphics and fonts in varying sizes and colors. Combining these scores with those from the text document yielded average speeds of 10.8ipm and 17.7ppm.

In sum? Taking this HP, the Lexmark, the two Canon AIOs, and even the Epson inkjet model together, there’s just not very much speed difference here. These scores are within an ipm here or a ppm there, hardly enough variance to warrant much discussion.

The M479fdw is not a photo printer, but I also timed it as it printed our test 4-by-6-inch snapshots. It averaged about 10 seconds per image, which is about average for most color laser printers.

Most laser printers produce near-typesetter-quality text, and the M479fdw is no exception. Your text documents should be suitable for most business scenarios. Where some laser AIOs don’t excel, however, is in printing pristine-looking business graphics and photos. The PowerPoint handouts and Excel charts with gradients and solid fills I printed were nearly faultless, with smooth gradations from one color to the next and no noticeable toner distribution issues. Blacks and other dark fills and backgrounds came out uniform, and colors were accurate, brilliant, and vibrant for color laser output.

Photos, too, looked good, with bright and accurate colors and excellent detail. The drawback versus inkjet output is that laser printers can’t print borderless pages, and photos (and some other types of documents) look more finished and professional when the content bleeds to the edges of the paper.

The M479fdw’s biggest drawback is its cost of operation. When you buy its highest-volume toner replacement cartridges (7,500 black pages and 6,000 color), your running costs should be about 2.2 cents per monochrome page and 14.2 cents per color page. If you print a lot, close to this machine’s suggested 4,000-page monthly output volume, you’ll find these numbers are relatively high and could wind up costing you plenty over the life of the printer. 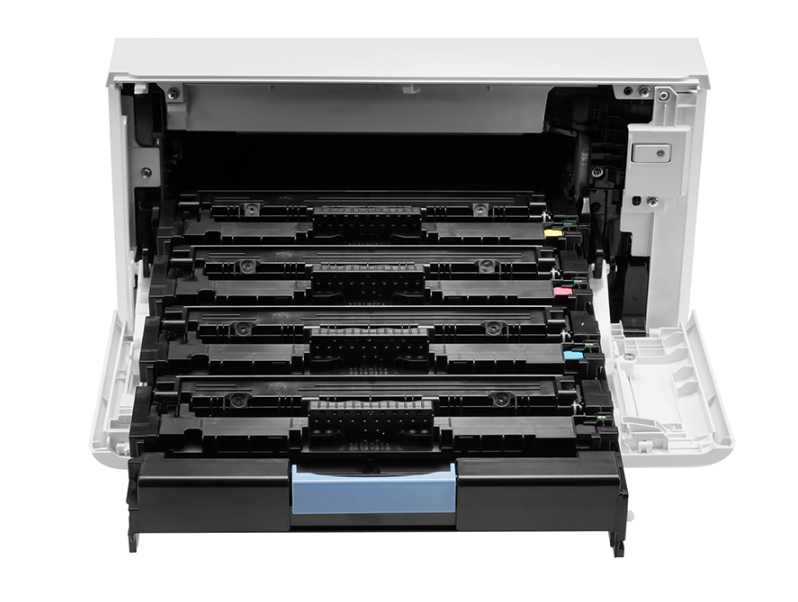 PageWide Pro 750dw, yet another inkjet-based laser alternative, delivers monochrome pages for as little as 1.1 cents. When shopping for a higher-volume printer, keep in mind that for every 100,000 pages you print, a 1-cent difference will cost you $1,000. If over the life of the machine you print, say, half a million pages…you get the idea. That’s a lot more money than the initial printer price.

A Color Laser AIO Running With the Pack

Overall, I liked this AIO, but there’s no reason to pay high running costs if you don’t have to. And that’s where the HP LaserJet Pro MFP M479fdw falls short. It prints well at respectable speeds, and it’s got all the necessary productivity and convenience features. But if you plan to print thousands of pages each month, close to HP’s recommended operation ceiling, Lexmark’s more robust MC2535adwe is a better value.

Still, if you don’t mind shelling out slightly more for Toner for a more modest usage situation, I can’t think of a good reason not to consider the M479fdw as your daily page churner.

The Best Sony Mirrorless Lenses for 2021

Slaying the Cable Monster: What You Need to Know About HDMI Cables

The Pathless (for PlayStation 5)

How to Fix a Jumpy or Inaccurate Touchpad

AT&T Accused of Stealing NumberSync Technology in $1.35B Lawsuit