How South Korea, France, and Italy are using the Covid-19 response to fight climate change 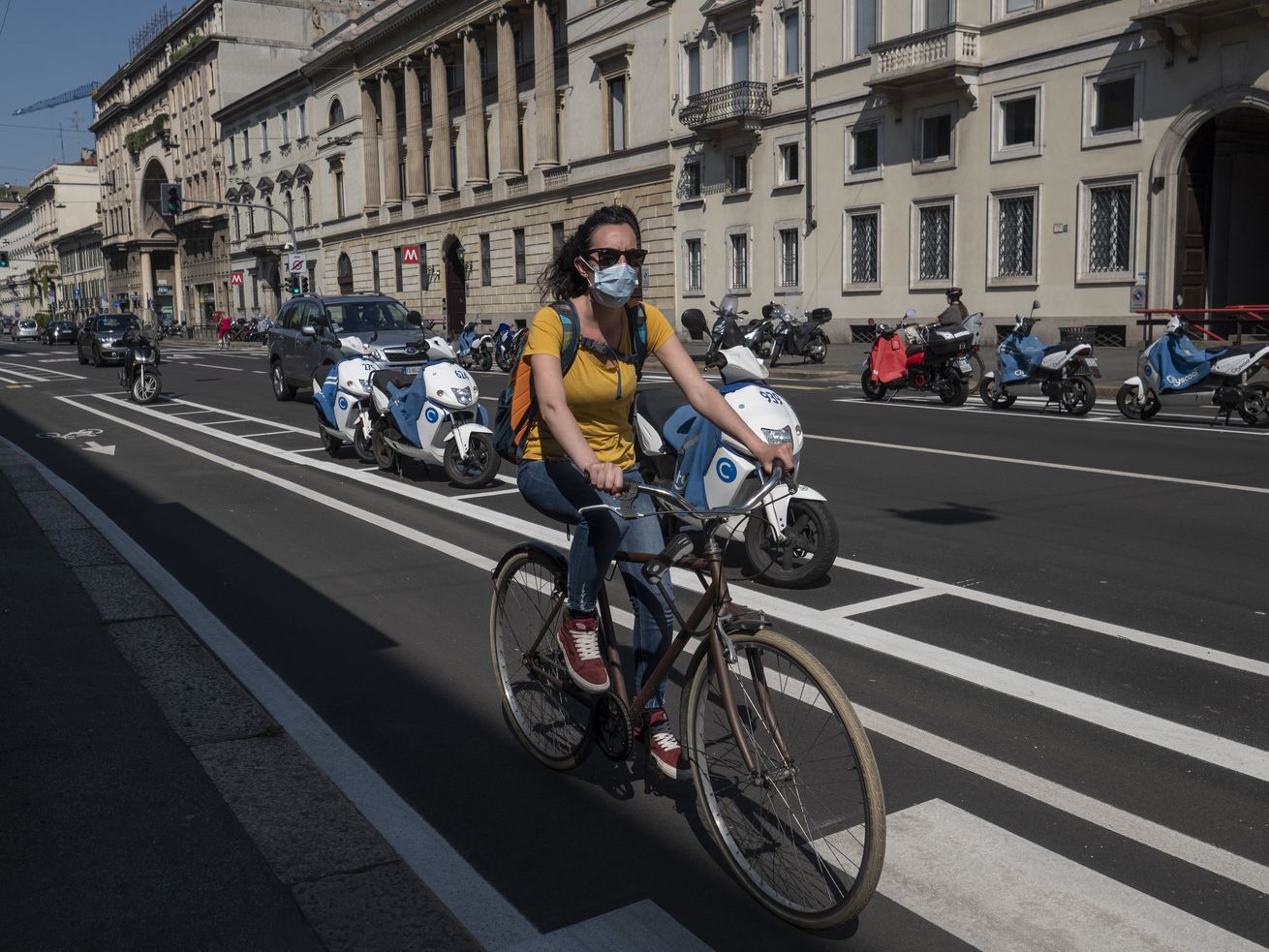 The United States has now put out several relief packages to deal with the economic impacts of the Covid-19 coronavirus pandemic, and lawmakers are considering even more.

But a glaring hole in these economic stimulus proposals is aggressive new climate policies and targets, which are desperately needed as that crisis accelerates.

Democrats have some environmental stimulus proposals under consideration, like $550 billion for clean transportation investment. Yet at the same time, some Republican lawmakers are also pushing for bailouts of the fossil fuel industry.

In the past few months, however, cities, businesses, and governments in other parts of the world have already shown that even while fighting off a deadly virus, they can take steps to mitigate the other massive catastrophe of climate change.

With clear roads, clear skies, oil prices plummeting, businesses needing bailouts, and political capital to spend, countries like South Korea, Italy, and France have decided that the pandemic response is an opportunity to rethink energy, infrastructure, industry, and government in ways to cut pollution and reduce emissions contributing to climate change.

The #EUGreenDeal offers a chance to transform our societies and our planet for the better. We need a strong economic and recovery model that gives back to our planet more than it takes away from it. (1/3) pic.twitter.com/nCFbAiqbFB

Globally, greenhouse gas emissions are poised to decline this year by a record 8 percent in large part due to the global response to the coronavirus. Many cities have also seen major declines in air pollution. But these gains are fragile, and emissions and pollution could easily spike again as economies recover. Keeping the incidental environmental improvements from the pandemic, then, requires deliberate decisions to protect gains even after the virus fades away.

Here are some of the ways people have used the crisis and the opportunity of the pandemic to enact climate policies, set ambitious goals for carbon-heavy industries, and build clean energy infrastructure.

South Korea has been hailed around the world for its response to Covid-19, with a massive national effort to test people for the virus, trace their contacts, and control the spread of the disease.

So it wasn’t too surprising that South Korean President Moon Jae-in’s ruling Democratic Party of Korea won a landslide victory in the national legislature elections in April. The result was a vote of confidence for his handling of the Covid-19 outbreak in the country.

The party is now aiming to leverage that political capital to implement a Green New Deal for the country, first revealed in March. While it borrows the branding from the Green New Deal proposals in the United States, South Korea’s version is more similar to the European Commission’s European Green Deal approved last year. The plan would make South Korea the first East Asian country to commit to reaching net-zero emissions by the middle of the century. South Korea is the seventh-largest greenhouse gas emitter in the world.

To meet this goal, South Korea would implement a carbon tax, increase investment in renewable energy, and end public financing for fossil fuel projects domestically and abroad. The proposal also calls for retraining workers who may be affected by the transition toward cleaner energy.

South Korea’s Green New Deal still has to be legislated and signed into law, and it may face strong opposition from some business and industrial interests. And South Korea isn’t the only country signing onto an ambitious climate agenda. Prior to the pandemic, countries like Austria and Spain had also seen election victories for parties campaigning on a Green New Deal.

But as the last South Korean election and recent polls in the country showed, Moon has widespread support for his climate agenda. And South Korea still stands out for sticking to its climate agenda during a global health crisis.

With fewer people driving and more people needing to walk at a distance as part of reducing the transmission of the coronavirus, some cities have begun to change how they allocate precious street and sidewalk space.

After the lockdowns began to relax, city officials in Milan, Italy, announced that they would modify 22 miles of roads to make more room for pedestrians and bicycles. Milan transport councilor Marco Granelli explained that the city wanted alternatives to car traffic and to public transit that would allow people to move around while staying apart.

“To avoid having another million cars on the streets, we will have to upgrade the two-wheel [infrastructure],” he told Radio Lombardy in April. “This is why we are putting in place an extraordinary action to create cycle paths.”

The immediate transformation of the city begins.

If not now, when?

Berlin, Germany, also capitalized on the reduced car traffic from a sudden surge in people working from home during the pandemic with 14-miles and more of pop-up bike lanes. Residents in more than 100 other German cities have applied to add more bike lanes during the pandemic.

Cities like Paris, Athens, Bogotá, Philadelphia, and Denver have also expanded infrastructure for bikes. In most of these cities, some of the new lanes are temporary and some are permanent, with city officials hoping to figure out just how much their citizens will avail themselves of the new real estate.

Transportation is one of the largest sources of greenhouse gas emissions in the world, accounting for almost a quarter of all emissions from burning fossil fuels. It’s also the fastest-growing source of carbon dioxide. Vehicles are a major source of urban pollution as well. So steps to offer alternatives to cars in cities have short- and long-term environmental benefits.

The economic crisis stemming from the coronavirus pandemic has forced some businesses to ask for government help. The aviation industry is a case in point. The collapse of international air travel during the outbreak has forced airlines to seek government bailouts.

But in some countries, those bailouts came with climate change targets. The global aviation industry causes between 2 and 5 percent of human-induced warming on the planet, and prior to the pandemic, the sector was poised to grow rapidly. That’s why some governments want to limit emissions from air travel.

For instance, the $10.8 billion bailout package for Air France-KLM included provisions that Air France must end short routes that compete with train routes. Train travel emits far fewer greenhouse gas emissions than flying over these short routes. The airline will also have to cut its emissions per passenger in half relative to 2005 by 2050.

“I want to reiterate that this support for Air France is not a blank cheque,” Bruno Le Maire, France’s economy and finance minister, told a National Assembly committee in April.

Germany, however, flinched at the idea of imposing new climate targets on its national air carrier, Lufthansa, with its $9.9 billion bailout.

Meanwhile, airlines around the world are retiring some of their oldest, largest, and thirstiest aircraft because of reduced demand. The remaining aircraft in their fleets are newer, smaller, and more fuel-efficient.

Still, demand for flights is poised to grow over the long term, and aviation remains one of the toughest sectors of the economy to decarbonize. It will take more research, investment, and policy to ensure these changes endure and for emissions to decline further.

Every day at Vox, we aim to answer your most important questions and provide you, and our audience around the world, with information that has the power to save lives. Our mission has never been more vital than it is in this moment: to empower you through understanding. Vox’s work is reaching more people than ever, but our distinctive brand of explanatory journalism takes resources — particularly during a pandemic and an economic downturn. Your financial contribution will not constitute a donation, but it will enable our staff to continue to offer free articles, videos, and podcasts at the quality and volume that this moment requires. Please consider making a contribution to Vox today.

A motor for digitisation

Top Futurist Speakers to Have at Your Conference in 2021

What Every Entrepreneur Should Do Before Launching a Startup

What Is the Future of HR?

How to Properly Use PR and SEO to Amplify Marketing Results

Stuck in Cyberpunk 2077 because of a new bug? CD Projekt Red might have a fix for you