The Fujitsu ScanSnap iX1600 ($495) is simply a terrific desktop document scanner. It’s a replacement for the Fujitsu ScanSnap iX1500 we reviewed back in December 2018, and a direct competitor in both price and features to the Editors’ Choice–winning Brother ADS-2700W ($400). The iX1600 is relatively fast and highly accurate, and it comes with Fujitsu’s well-regarded ScanSnap and ScanSnap Home software. This end of the field has many great products to choose from, but the iX1600 stands out with its excellent software bundle, performance, and ease of use, not to mention a very reasonable list price (though the ADS-2700W and other competitors are less expensive). That makes it our latest top pick among desktop document scanners for SOHO (small office, home office) users.

Fujitsu is launching two scanners together: the ScanSnap iX1600 and the iX1400. The latter is slightly slower than the iX1600 and lacks the intuitive color touchscreen and a few other features. Though the iX1600 costs $100 more, it’s a better value overall for the price. 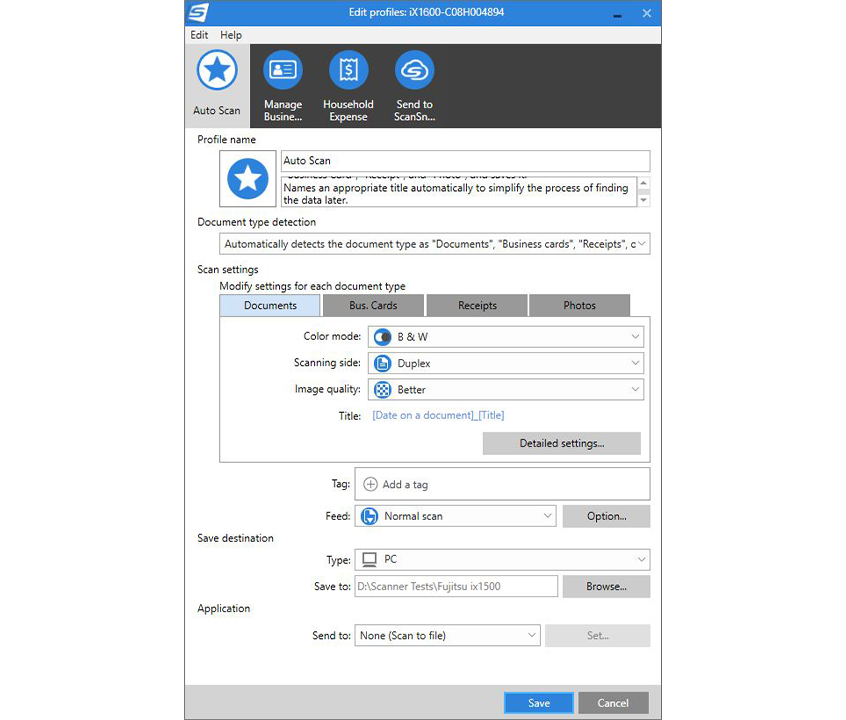 See How We Test Scanners

Next, I clocked how fast the iX1600 scanned, processed, and saved our two-sided 25-page document to the more versatile searchable PDF. After several runs, it averaged an impressive 40 seconds to scan and convert the entire document. That score beat all the other machines talked about in this review, most of them by just a few seconds. The Canon model, which came in 10 seconds behind the iX1600, was the slowest.

Also impressive was the iX1600’s accuracy on both our Arial and Times New Roman font pages. It managed to convert the Arial text page without errors all the way down to 4 points and the Times New Roman page mistake-free down to 6 points. Not only are these results far beyond the requirements of nearly all business applications, they are among the best I’ve seen. Most of the other scanners in this group achieved exceptional accuracy scores too. The Epson DS-575W turned in an underwhelming 8 points Arial and 10 points Times New Roman without errors, but I tested it a while back, so it may have received software and firmware updates since then.

I also scanned a couple of stacks of business cards into the card archiving section of ScanSnap. As with the other scanners I’ve tested, overall accuracy was affected primarily by the design of the individual cards. Cards with color backgrounds, gradients, and other features in and around the important text fields played havoc with the recognition process. Applying the various background and other noise filters helped some, but often I found that typing the data from the most elaborately designed cards was the fastest data-entry method. Given how often business cards are scanned with machines like these, I hope people designing them will consider that being machine-legible is as important as having eye-catching and memorable graphics.

A Scanner Anyone Can Use With Ease

Over the past few years, Fujitsu’s ScanSnap scanners have become faster, more accurate, and easier to use, making them ideal for offices where some team members may be technologically challenged. The ability to customize the interface for each user is especially handy. The entire interface is icon-driven, and the scanner does exactly what’s expected each time you touch Scan. The ScanSnap iX1600 easily receives our latest Editors’ Choice nod for SOHO desktop document scanners.