If you’re like me, every headache or stuffy nose these days is accompanied by a strong case of COVID-19 paranoia. With its premium Sense smartwatch, Fitbit is giving you many of the features you want and need to monitor your health amid a global pandemic. At $329.95, it’s the company’s priciest wearable yet, but it packs sensors to measure the amount of oxygen in your blood, as well as changes in your skin temperature, stress level, and heart rhythm, in addition to the robust sleep and fitness tracking features Fitbit is known for. Its selection of downloadable apps pales in comparison with what’s available on the Apple Watch, but it offers some welcome smartwatch features including Amazon Alexa support, Pandora and Spotify music controls, and Fitbit Pay mobile payments. If you’re in the market for an attractive wearable with long battery life and a focus on health and wellness, the Sense is worth a look.

At $329.95, the Sense is Fitbit’s most expensive wearable to date (aside from 2018’s Ionic: Adidas Edition, which retailed for the same price). That places it on similar footing to the new $399 Apple Watch Series 6, and $50 more than the GPS-only Apple Watch SE (which you can get with built-in cellular connectivity for the same price as the Sense).

The Sense comes with a free six-month trial of Fitbit Premium, which includes a new Health Metrics dashboard in the Fitbit app that offers 7- and 30-day graphs that let you track your breathing rate (the number of breaths taken per minute), heart rate variability (the variation in time between heartbeats), resting heart rate (the number of times your heart beats per minute when you are still and rested), and skin temperature variation. A Premium subscription also gives you access to workout videos from brands like Barre3 and Gaiam’s Yoga Studio, and meditation sessions from brands like Aaptiv and Aura. After the free trial, Fitbit Premium costs $9.99 per month or $79.99 per year, the same as Apple’s forthcoming Fitness . 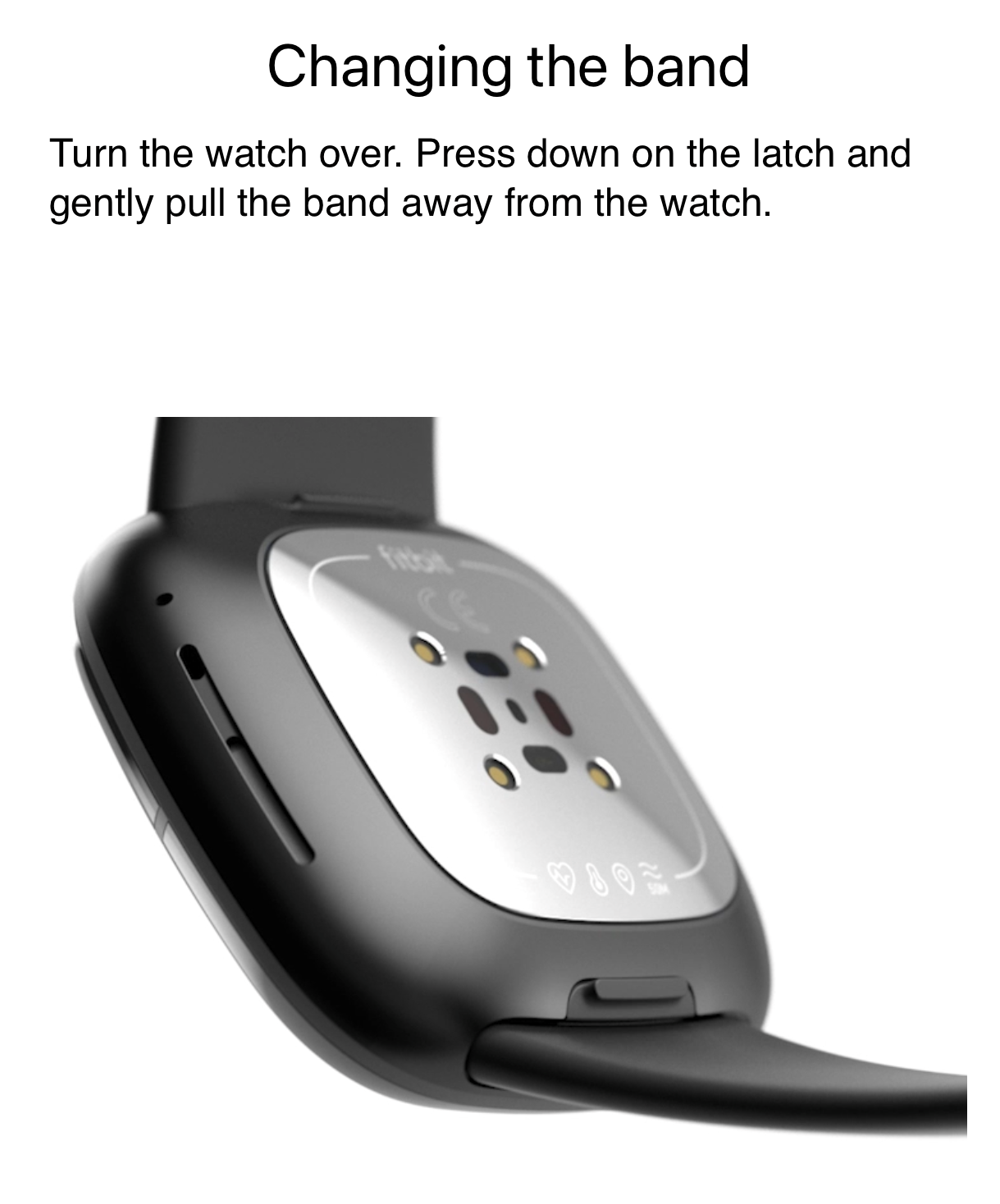 Charge 4 is flush with the back of the device, the latch on the Sense protrudes slightly. At one point during testing, one of the straps popped off as I was washing dishes and the watch fell off my wrist into my sink. My wrist must have hit the strap release latch in just the right way, so the risk of this happening again is probably low, but it’s something you should be aware of.

Fortunately, the Sense is water-resistant to 164 feet, so it survived the tumble into the sink without issue. I also wore it in the shower and it fared fine. If the Sense gets wet, you should dry it completely as soon as possible. Fitbit recommends wearing the watch high on your wrist for a tight fit during workouts, and regularly cleaning the band and your wrist with a soap-free cleaner.

By default, the always-on display mode is disabled, which drains battery faster. The good news is that you can easily enable and disable it from the access control center by swiping right on the clock face. And even with it enabled, my test results are far superior to the Apple Watch Series 5/6 and the Samsung Galaxy Watch3, all of which last around 18 hours on a charge.

If you don’t already have a Fitbit account, you’ll need to download the app (available for Android or iOS) and create one before setting up the Sense. Open the Fitbit app, tap your profile image, select Set Up a Device, select the Sense from the list, then press the Set Up button and follow the on-sceen directions.

At first, my unit experienced some connectivity issues and wouldn’t sync with the app at times. If this happens, you can try resetting the Sense by pressing and holding the button on the left side for 10 to 15 seconds until you feel a vibration and see the Fitbit logo appear on the screen. I think the issue was on the software side, because after an update it didn’t happen again.

Once you get it set up, the app walks you through how to navigate the watch. After that, one of the first things I did was change the clock face. In the Fitbit App Galley, there are more than 10,000 clock faces to choose from, though you have to pay for some of them. One of my favorites is Fitbit’s simple Sunrise clock face, which features a cute and colorful illustration depicting the day and night cycle. 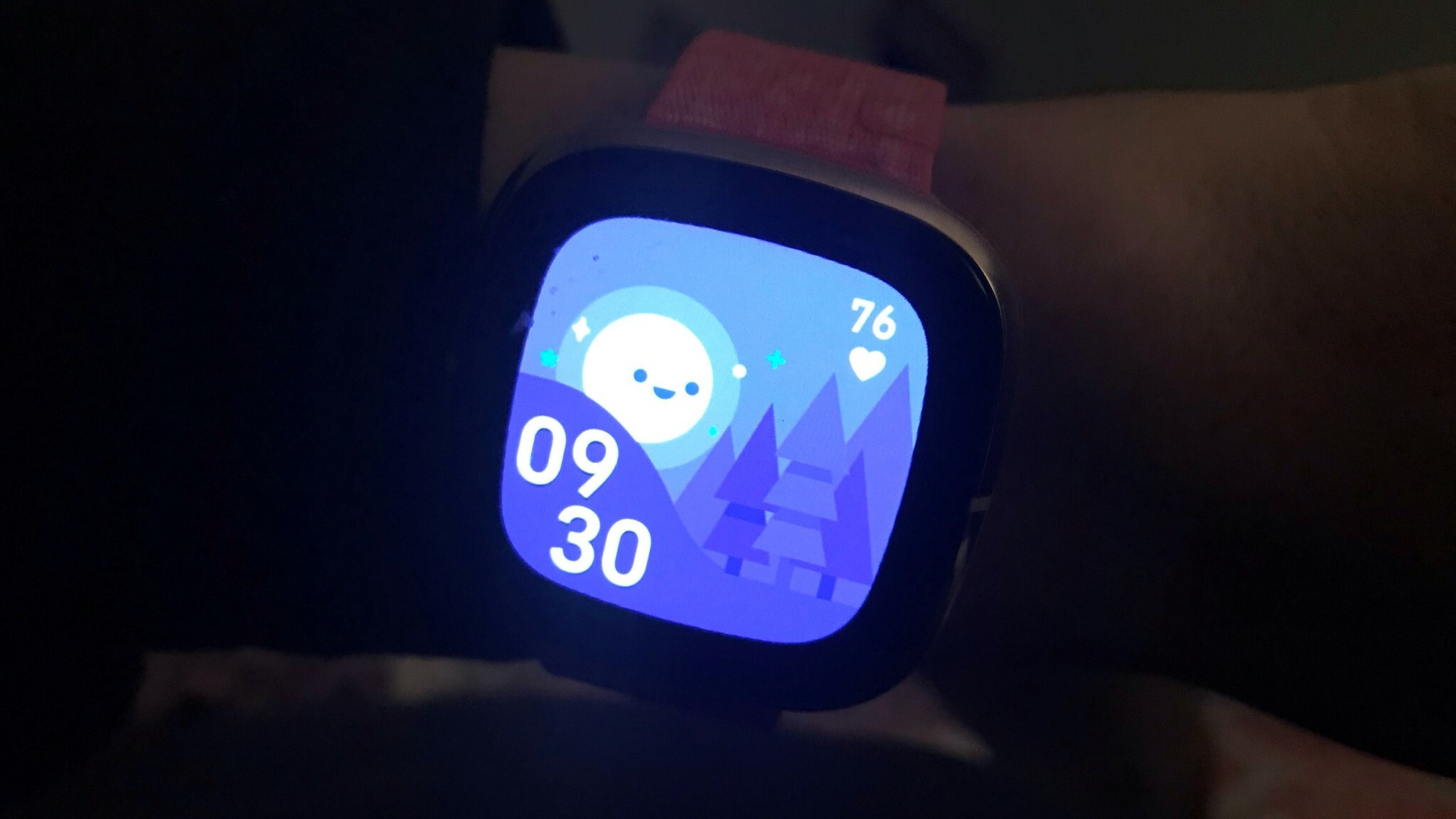 The Sense features a new solid-state sensor button on the left that can be programmed for multiple functions. Fitbit says to make sure to cover the entire button with your thumb when pressing it. A single press will wake up the screen or return you to the clock face from anywhere on the watch. Pressing and holding the button for two seconds can be customized to open an app of your choice such as Alexa (the default setting), music, payments, or the timer. Finally, you can double press the button to quickly access four apps of your choice.

To customize the button shortcuts, navigate to Settings > Shortcuts on the watch. I left Alexa as the press and hold shortcut, and selected the Exercise, Music, Payment, and Timer apps as the double-press shortcuts.

Other than that, you can navigate the Sense with swipes and taps on the screen. Swipe down from the clock face to view your phone’s app, call, and text notifications. Swipe up to access widgets like the weather and your Core Stats for the day (steps taken, floors climbed, distance traveled, calories burned, and more). Swipe right to quickly access watch settings and modes. 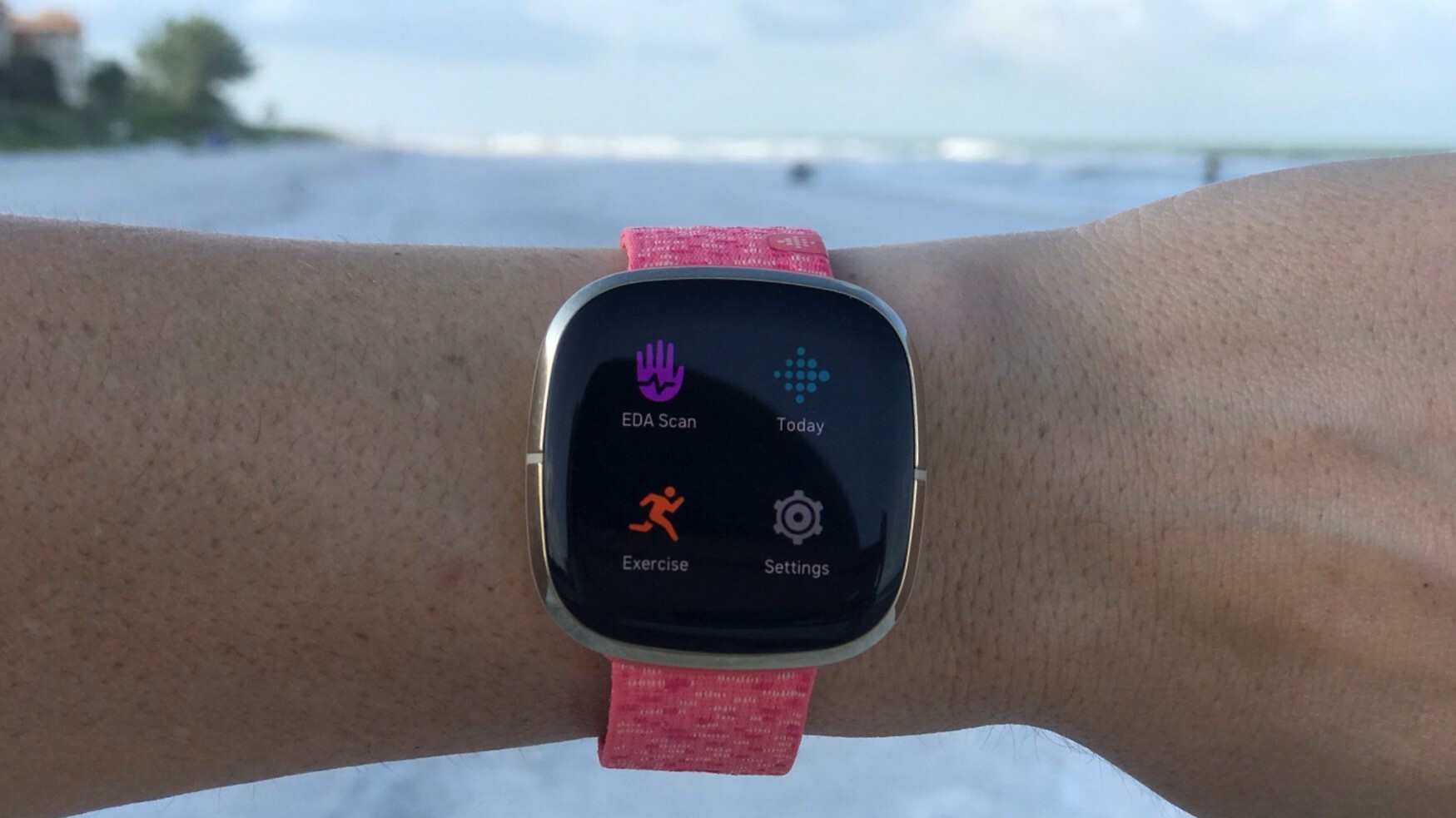 The Sense offers several features to help you monitor and combat stress, including a new EDA Scan app and Stress Management Score. The EDA Scan app measures small electrical changes in your skin’s sweat level to track your body’s response to stress. The watch says EDA responses may be due to stress or other factors such as movement, noise, or temperature change, but in general, the fewer EDA responses recorded, the calmer you are. 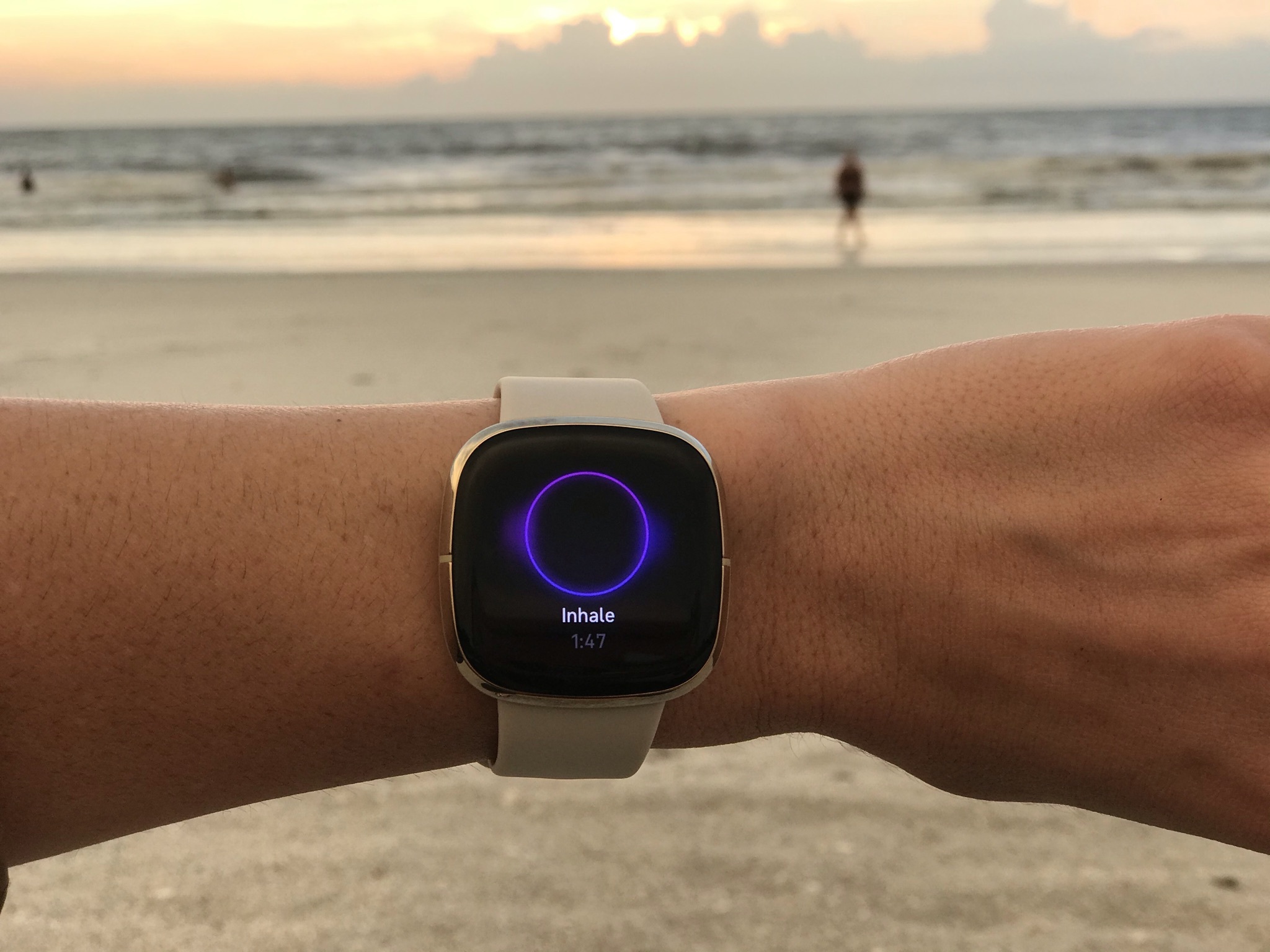 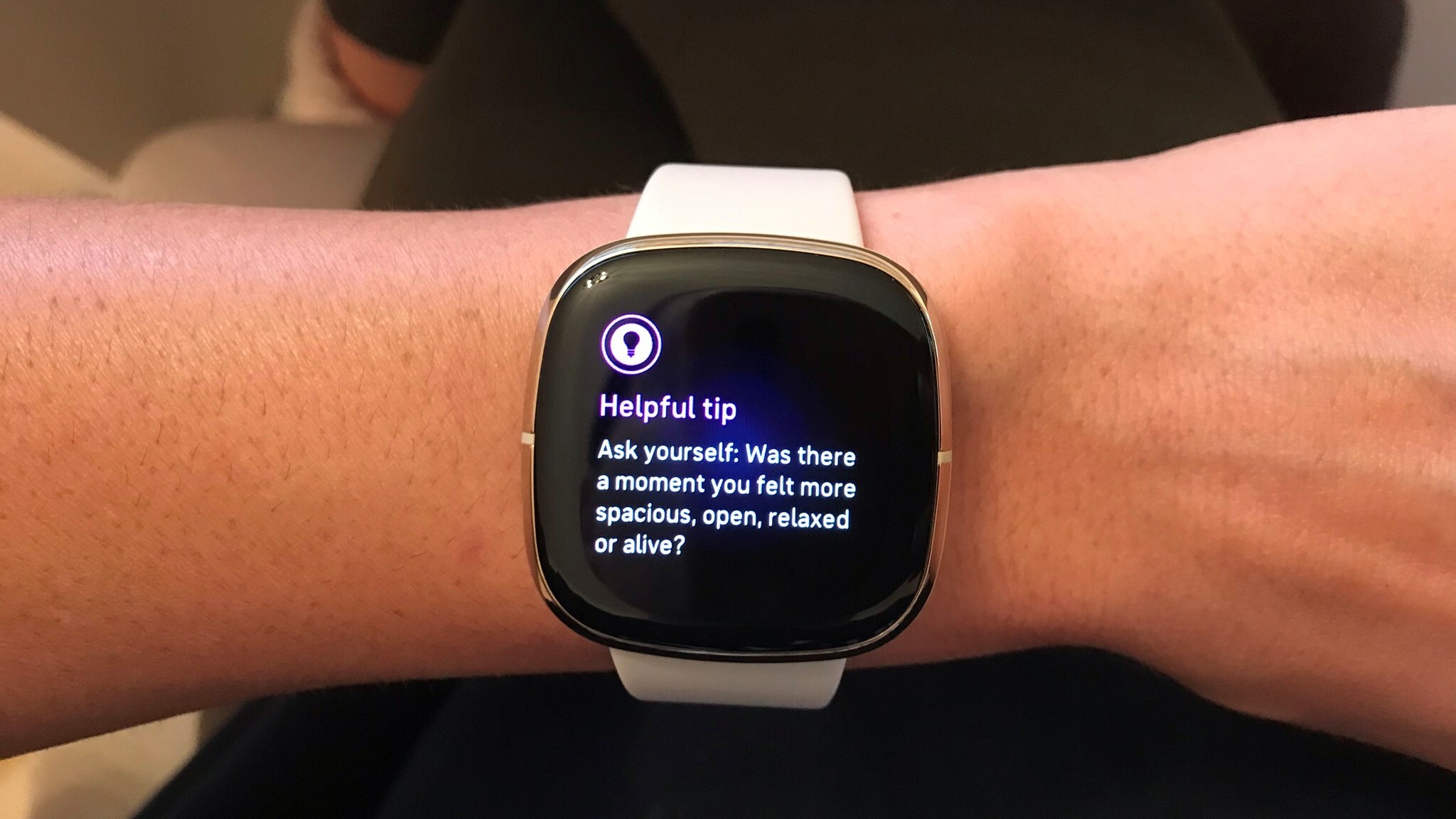 During the day, the Sense automatically tracks your steps, heart rate, calories burned, floors climbed, distance traveled, and Active Zone Minutes (earned for time spent in fat burn, cardio, or peak heart rate zone). It keeps tabs on your hourly activity and can send you reminders to move 10 minutes before the hour if you haven’t reached 250 steps.

You can view this data in the Today app on the Sense, or in the Fitbit app. The Today app also shows your progress toward your weekly exercise goal and sleep data from the previous night. 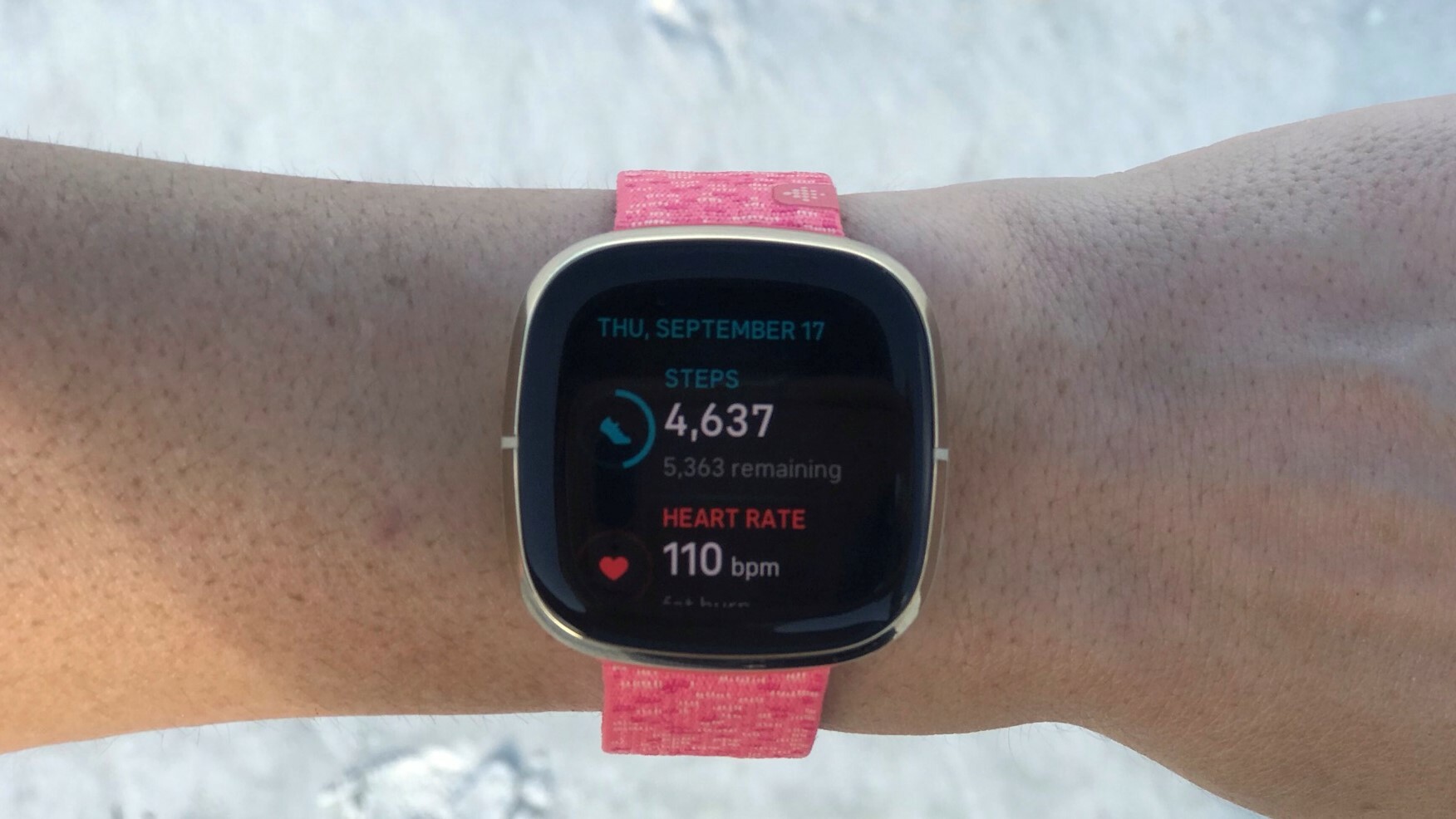 rowing workouts. The watch also features an integrated GPS so it can track your pace and distance when working out without your phone. 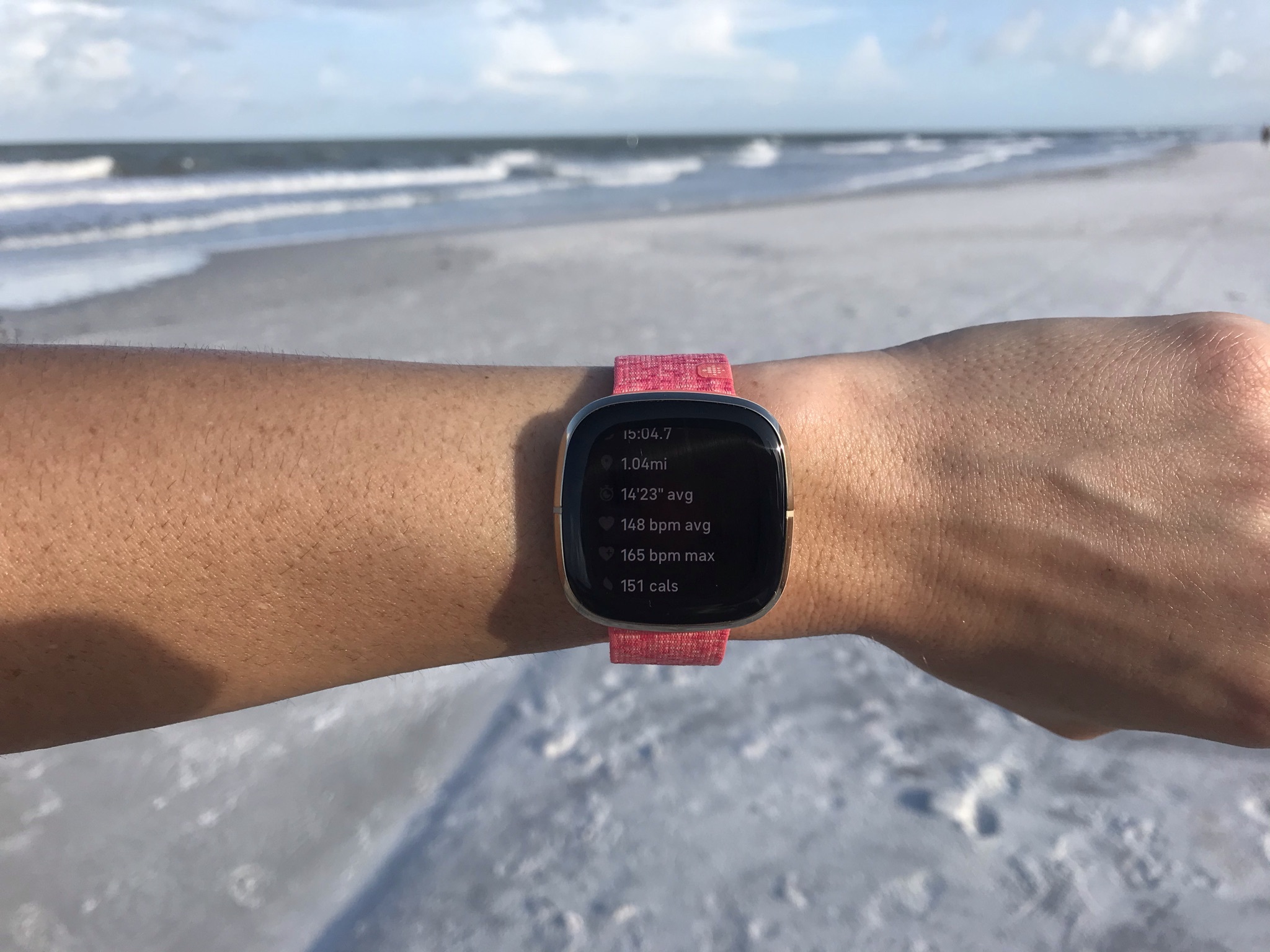 When you wear it to bed, the Sense will track your light, deep, and REM sleep, as well as your blood oxygen saturation level (SpO2). In the Sleep section of the Fitbit app, it keeps a record of your shut eye each night. You can click into each record to view your metrics for that night, complete with graphs showing when and for how long you were asleep and awake, your sleep stages throughout the night, your sleeping heart rate, and your estimated oxygen variation (whether the changes in your blood oxygen saturation were high or low). 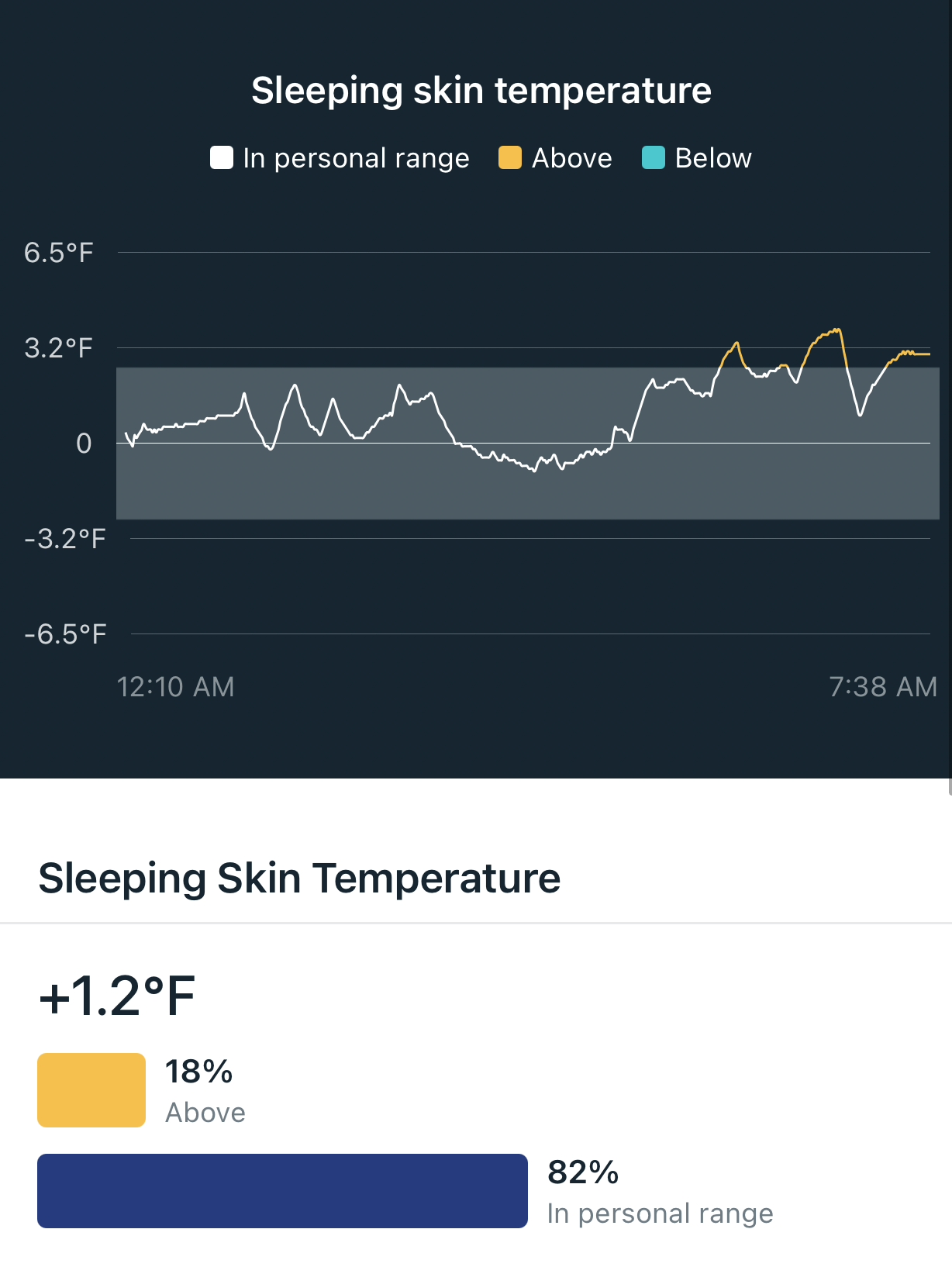 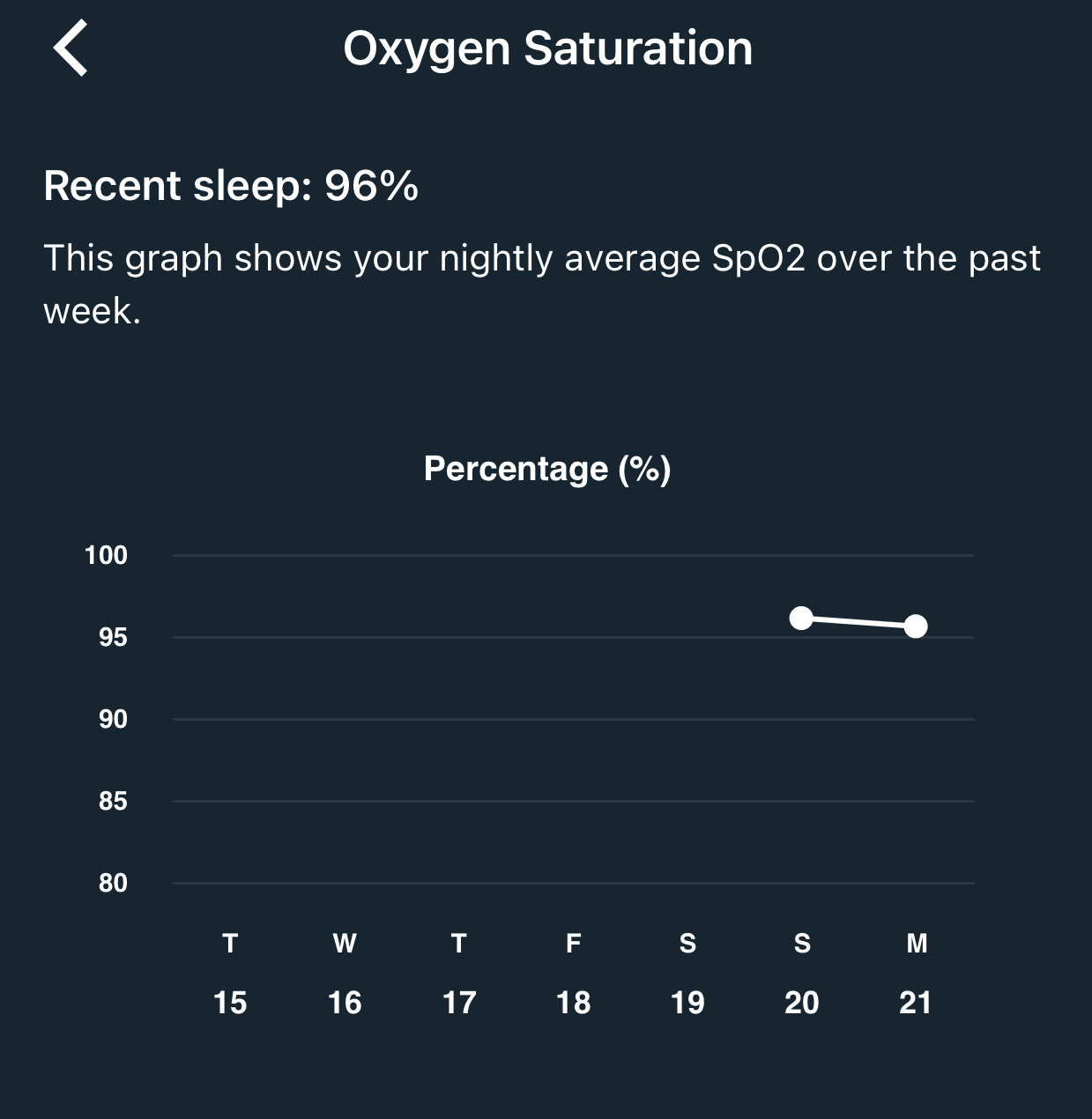 Psychology Today article explains. “A significant drop in HRV may indicate your body is experiencing stress, strain, or showing potential signs of illness,” the Fitibt app says. The app shows a graph of your nightly average HRV in milliseconds over the past week, so you can easily see if your score dropped one night. The first night it tracked this metric, it gave me an HRV score of 89ms.

The Sense is primarily a health and fitness watch, but it offers some handy smartwatch features like Pandora and Spotify support, Fitbit Pay for mobile payments, and smartphone notifications. 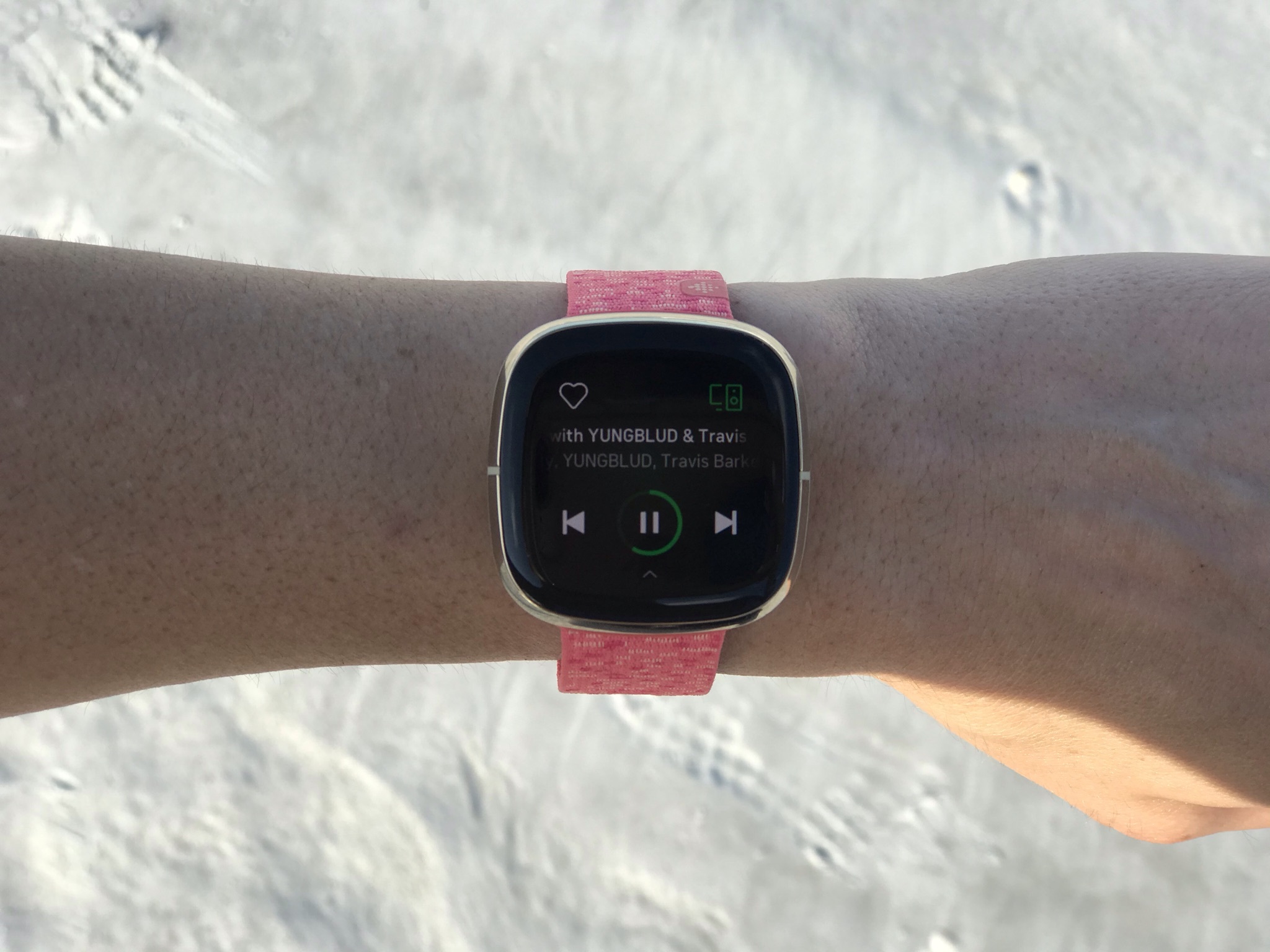 smart home devices, check the weather, and get answers to questions. During the initial setup process, you have the option to connect your Sense with Alexa. If you opt to do so, the app takes you to an Amazon sign-in page; just enter your credentials, and press Allow to give the Fitbit Alexa skill permission to access your Fitbit data.

The Sense has a built-in microphone, which Fitbit says will only turn on when you’re using the voice feature. If you’re worried about privacy, you can disable it altogether. 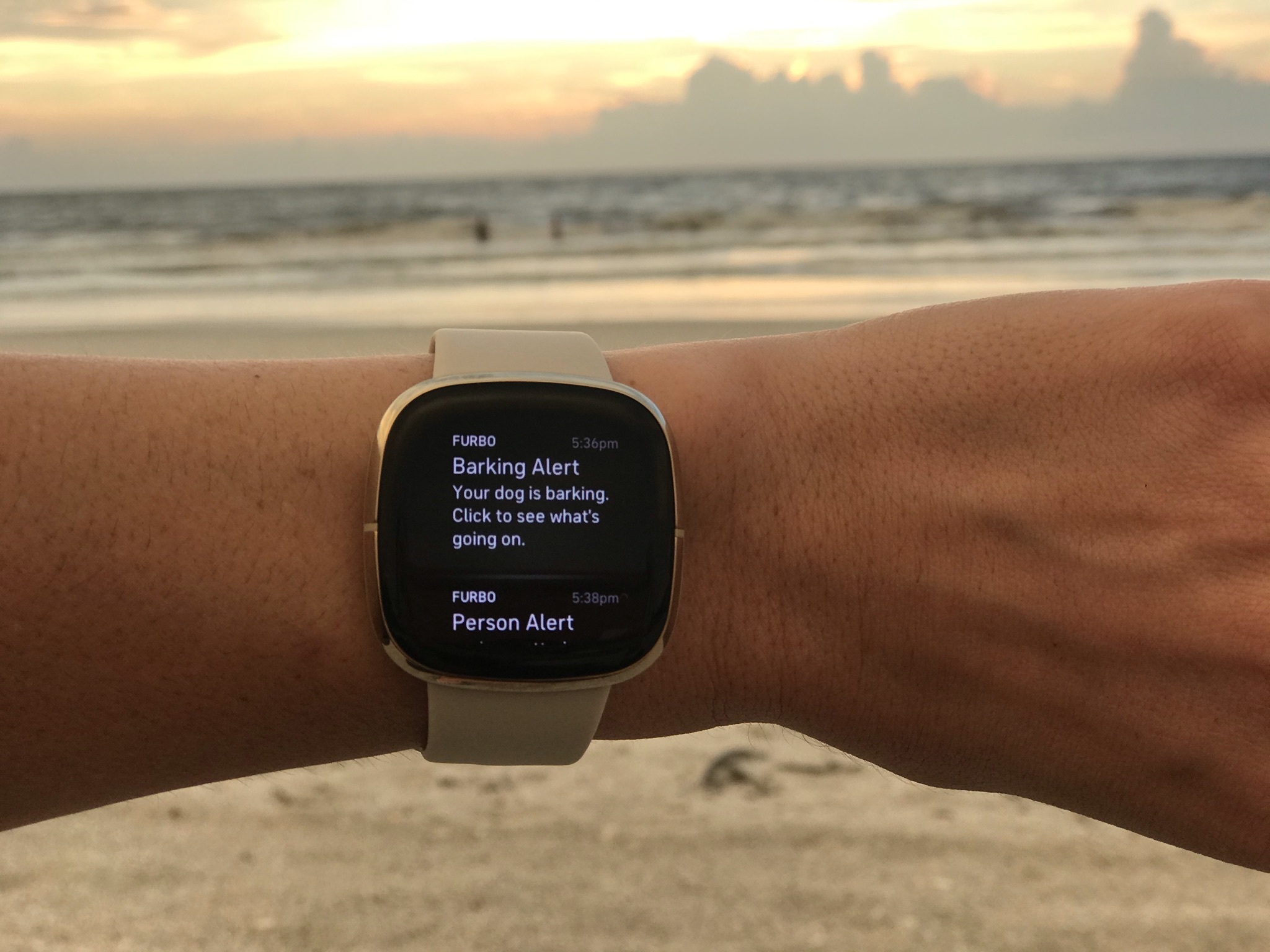 The Fitbit Sense feels like the right wearable for this time. It offers a robust suite of features that are particularly useful in the era of COVID-19, including the ability to measure your blood oxygen saturation, heart rhythm, skin temperature variations, and stress level.

While it’s first and foremost a health-tracking wearable, the Sense offers a few nice smartwatch features, including Alexa support (with Google Assistant on the way), mobile payments, and music controls. Its attractive design, bright screen, and long battery life add to its appeal.

That said, the Sense’s $329.95 price might give you pause, especially in light of the new Apple Watch SE, which starts at $50 less. The Sense offers more advanced health monitoring features, including EDA, ECG, SpO2, and skin temperature sensors, while Apple’s cost-conscious wearable offers a much wider selection of downloadable apps, better integration with the iPhone for calls and texts, plus some nice health and safety features of its own, including an automatic handwashing countdown timer and fall detection. Ultimately, both are solid options depending on your priorities.

And if you’re looking to spend even less, Fitbit’s new $229.95 Versa 3 is another health-focused smartwatch. It lacks EDA, ECG, SpO2, and skin temperature sensors, but it includes many other Sense features like integrated GPS, 24/7 heart rate tracking, sleep monitoring, guided breathing sessions, Amazon Alexa, Spotify, and Fitbit Pay for $100 less.