Oregon-based Falcon Northwest specializes in building systems that inspire envy. Its Talon mid-tower (starts at $2,919) is back to us for review, this time more powerful than ever thanks to AMD’s latest 16-core Ryzen 9 5950X processor and Nvidia’s GeForce RTX 3080 in our $4,956 test guise. Outfitted with top-shelf everything—an Asus ROG X570 motherboard, tasteful RGB lighting, custom cabling, liquid cooling, and more—this gaming desktop is engineered from the ground up to be the best it can be. For those fortunate enough to have the budget, the Talon doesn’t just meet expectations—it soars right over them, easily earning an Editors’ Choice award among cost-no-object gaming rigs.

Falcon Northwest designed and built the Talon, including its case, so there’s nothing quite like it in the aftermarket. Its steel construction has a tank-like feel; my review unit tips the scales at about 35 pounds. Its 17.25-by-8.75-by-15.5-inch (HWD) measurements are on point for a mid-tower. 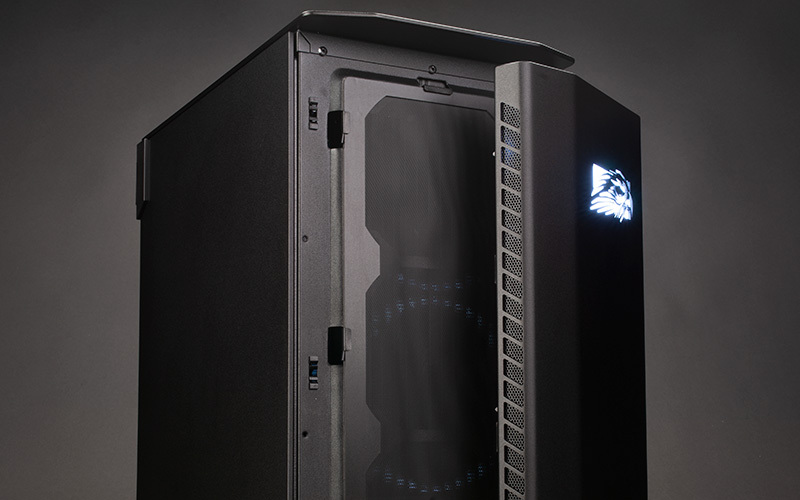 2019 Talon. For those going all in, Falcon Northwest offers stunning full chassis painting, too. 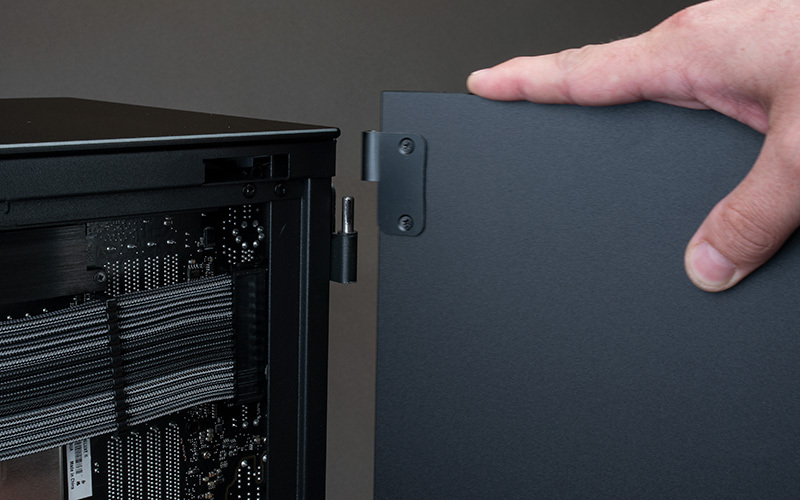 Cablemod to custom sleeve and cut the cables to length, a notably standard service on the Talon. Custom colors are available. The photos speak for themselves. 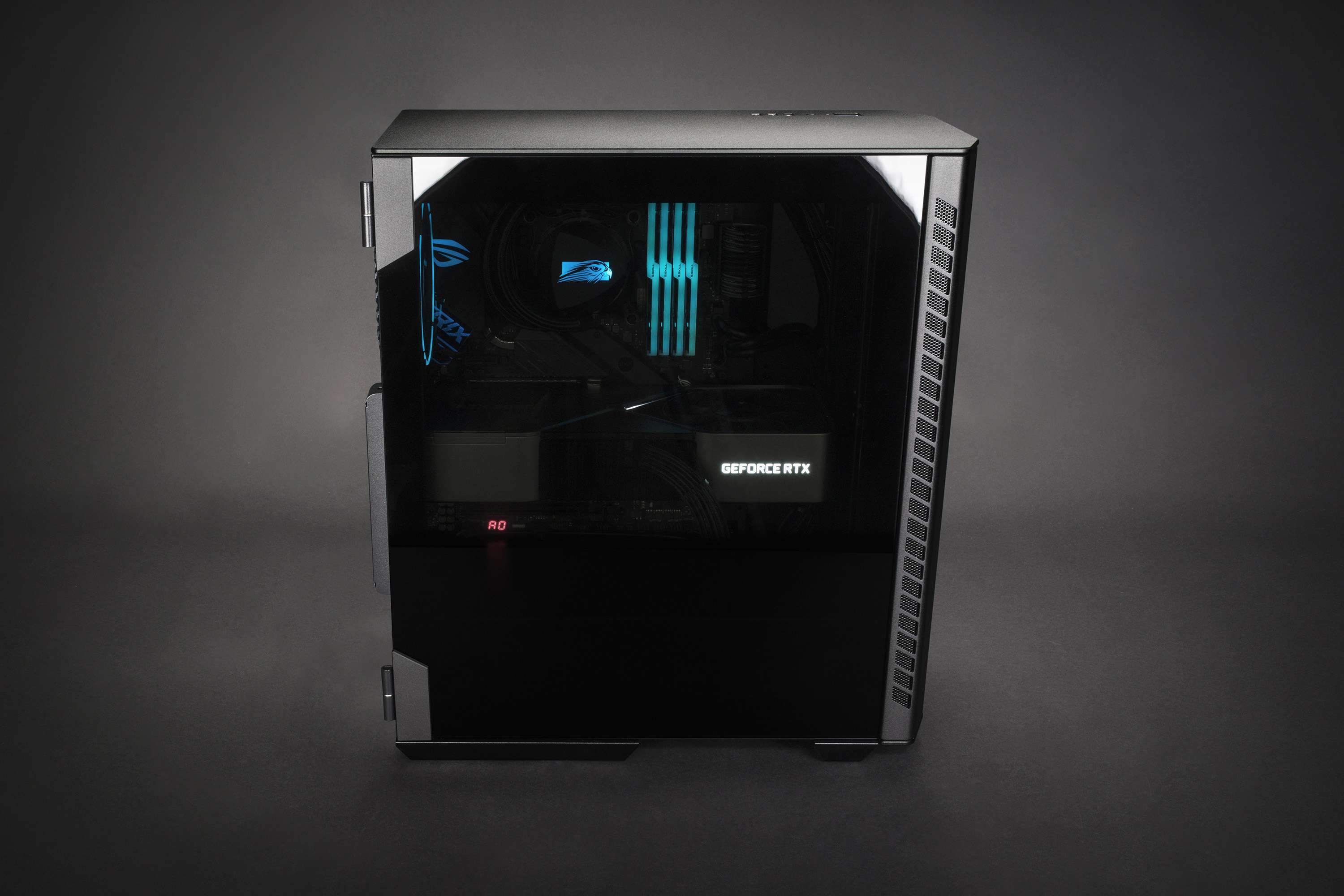 Asus ROG X570 Crosshair VIII Hero motherboard is standard on AMD X570-based Talon configurations. Like everything else in this desktop, it’s far from the bottom shelf, an enthusiast-grade board with all kinds of extras. Meanwhile, cooling the Ryzen 9 5950X is an Asetek 680LS liquid cooler with a front-mounted 280mm radiator. Its twin 140mm fans were barely audible throughout my testing. The 120mm rear fan was also nonobtrusive.

For storage, my system held just one 2TB Seagate FireCuda 520 solid-state drive in the motherboard’s upper M.2 slot, but the Talon can hold an additional M.2 drive, two 2.5-inch drives, and two 3.5-inch drives. Meanwhile, the board’s four memory slots each hold a 16GB UDIMM of G.Skill TridentZ Neo memory running at high DDR4-3600 speeds for a total of 64GB of dual-channel memory.

Below, the huge GeForce RTX 3080 Founders Edition card is hard to miss. I like that Falcon Northwest offers this very high-quality board as an explicit option; vendors will often offer a generic RTX 3080 option and send an undetermined third-party model. (It’s not that any GeForce RTX 3080 board is likely to be of bad quality—it’s just nice to have the choice.)

The neat cabling continues on the other side of the tower… 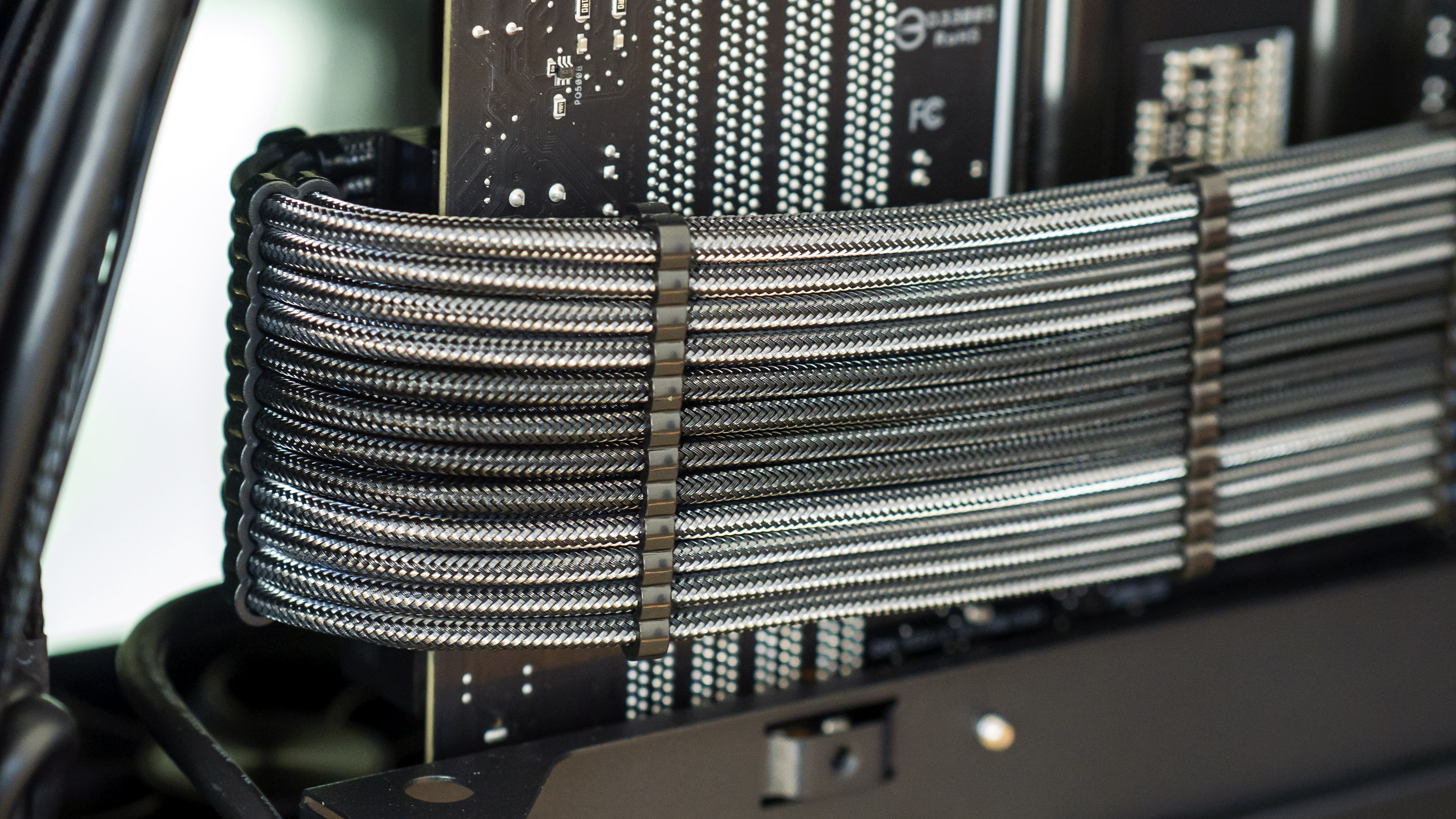 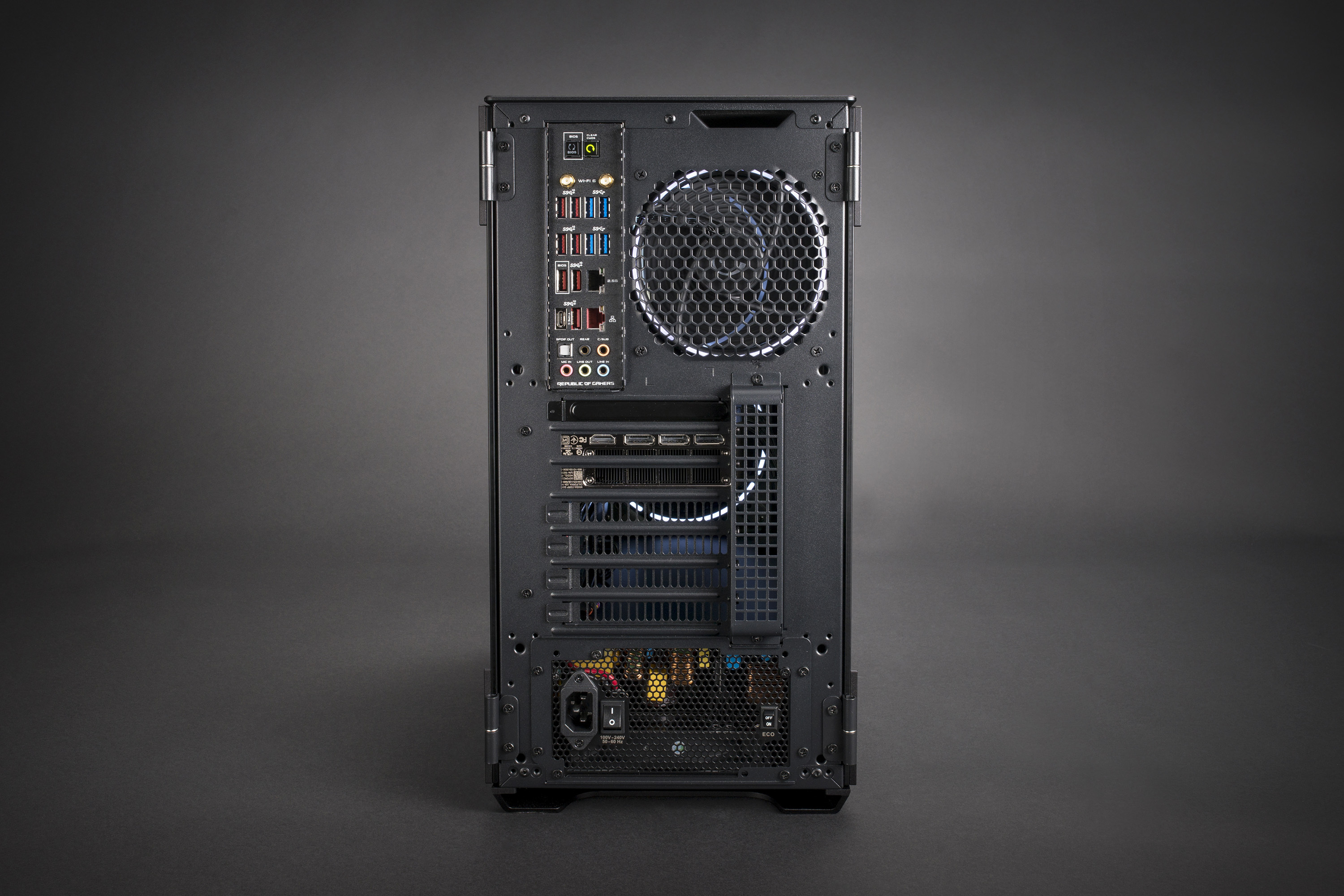 There were differences among my mock-builds. Not all let me select the equivalent grade of parts found in the Talon, and I had to add three-year warranties to match the Falcon Northwest’s admirable standard coverage.

Last, there is the Talon’s build quality to factor into its value. Its custom cabling and other intricacies may not be strictly necessary, but I would say that when spending for a desktop with this kind of hardware—a luxury on its own—they make the expenditure easier to appreciate.

For comparison, I pitted the Talon against the desktops whose basic specifications are below. 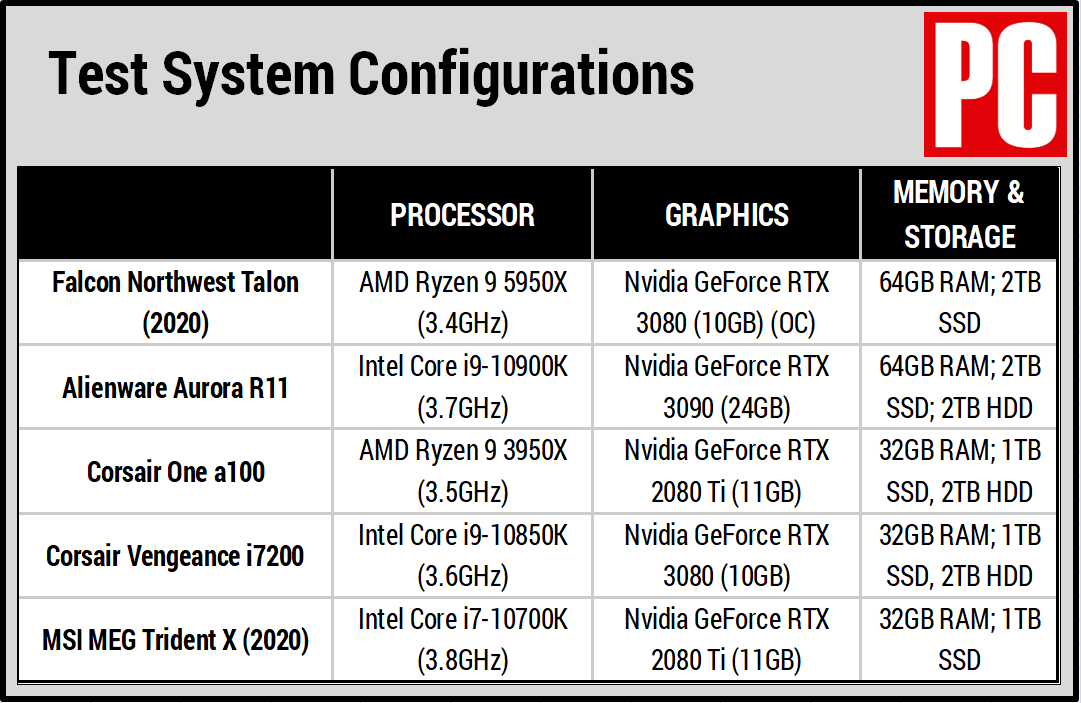 Corsair Vengeance i7200 and the Alienware Aurora R11 will provide good insight into the gaming performance of the Ryzen 9 5950X chip since they pair their GeForce RTX 3000 series cards with 10-core Intel Core i9 processors. (The Talon is also available with the Alienware’s Core i9-10900K.)

The Corsair One a100 and the MSI MEG Trident X are the other two contenders, both packing the previous-generation flagship GeForce RTX 2080 Ti.

The Ryzen 9 5950X replaces the Ryzen 9 3950X (featured in the Corsair One) as AMD’s flagship consumer CPU. It has 16 cores and can process up to 32 threads, like the outgoing chip, and boasts a slightly higher boost clock (4.9GHz versus 4.7GHz). The real performance improvement, however, should come from its new Zen 3 architecture, which AMD says brings better single-threaded and gaming performance. Let’s let the numbers speak for themselves.

Before we get to testing, note that Falcon Northwest applied a healthy 125MHz overclock to the core of my unit’s GeForce RTX 3080 as a part of its overclocking service, so it will be a little faster than the stock Founders Edition card PC Labs tested a few weeks back.

The Talon produced the highest score we’ve seen in our first benchmark, PCMark 10. We use it to assess overall system performance for office-centric tasks such as word processing, spreadsheeting, web browsing, and videoconferencing. We consider 4,000 points a sign of excellent productivity, so the Falcon Northwest’s 8,454-point showing is astronomical. Meanwhile, the Talon didn’t complete our PCMark 8 storage benchmark, but that’s not unusual for top-shelf hardware. (The same occasionally happens in PCMark 10, as it did to the Alienware and Corsair Vengeance.) 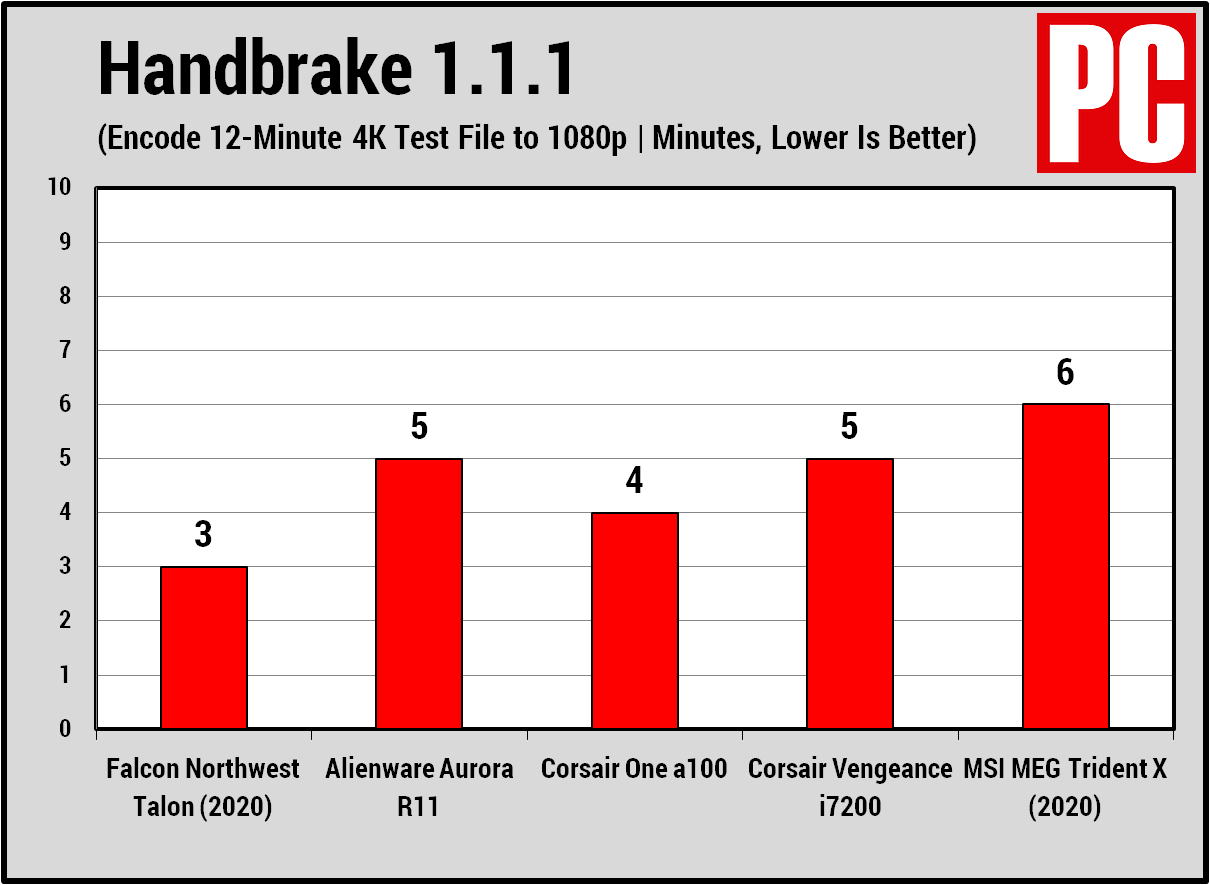 The final test in this section is photo editing. We use an early 2018 release of Adobe Photoshop Creative Cloud to apply 10 complex filters and effects to a standard JPEG image, timing each operation and adding up the totals. This test is not as CPU-focused as Cinebench or Handbrake, bringing the performance of the storage subsystem, memory, and GPU into play. 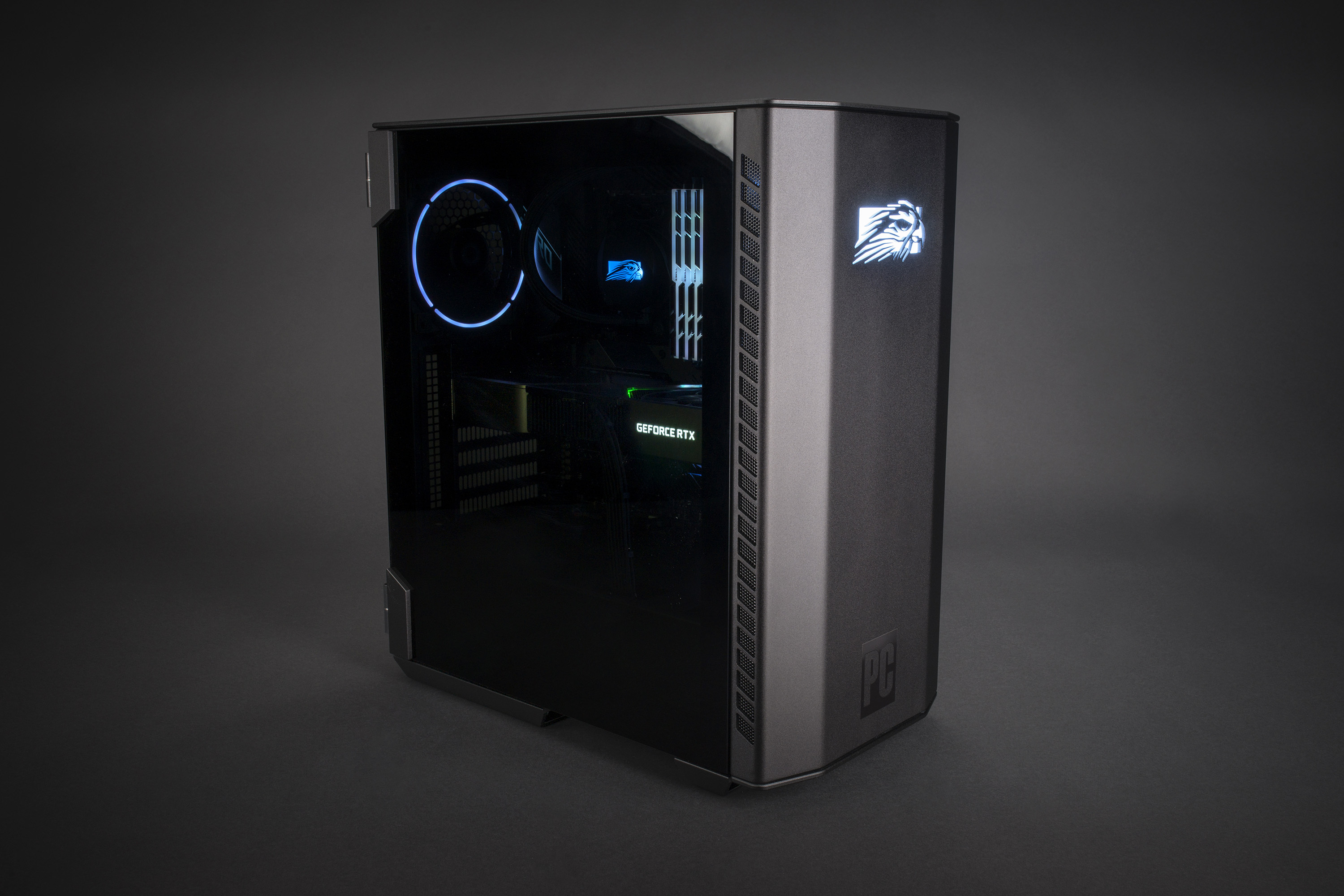 This latest Talon is no less impressive than the past versions that PCMag has reviewed. Equipped with AMD’s flagship Ryzen 9 5950X, it’s a true barnstormer, even if the chip is overkill for pure gaming applications. The Talon is expensive, but for those already spending for this level of hardware, the premium buys Falcon Northwest’s unmatched attention to detail and peace of mind. It’s one of the finest mid-towers that money can buy in late 2020.