EPOS is best known for its gaming headsets, and it tries to carry that appeal over to its first pair of true wireless earbuds, the GTW 270 Hybrid. These $199 earphones are ostensibly designed for gaming, and include a USB-C adapter so you can use them with your Nintendo Switch, PlayStation 4, and other other USB devices. They aren’t designed for voice chat, though, so they fall short on the gaming end of the spectrum. As earphones that focus on the listening experience, though, they offer good sound quality and a stylish, comfortable design.

The GTW 270 earpieces are sleek, with rounded black bodies that fit snugly in your ear without fins or other stabilizers (especially if you choose the right size eartip from the four included pairs). The back panel of each earpiece is a flat, metallic gray surface bearing the EPOS logo. The splash of gray adds some personality without making them look over the top or particularly oriented toward gaming. The earpieces are rated IPX5 for water resistance, meaning they should hold up to rain and sweat, but you shouldn’t submerge them.

A tiny button sits near the top of the left earpiece, facing forward. This serves as the sole physical control. One press plays or pauses music, or accepts calls. Two presses skips forward a track. Three presses reverses a track. Pressing and holding it brings up your phone’s voice assistant. There are no volume controls.

The choice of such a small button is a surprise, especially when there’s so much real estate on the back of each earpiece to serve as a touch-sensitive panel. The button can be a little hard to locate when you start using the earphones, and a second button on the right earpiece would be a welcome addition for volume control at the very least.

The included charging case feels quite nice, thanks to its aluminum build. It’s a little flip-top rectangular box with a set of five power LEDs on the front, along with a status/pairing button below. A USB-C port for charging sits on the back. Like the earphones themselves, the case looks stylish, and doesn’t exude any particular gamer energy. 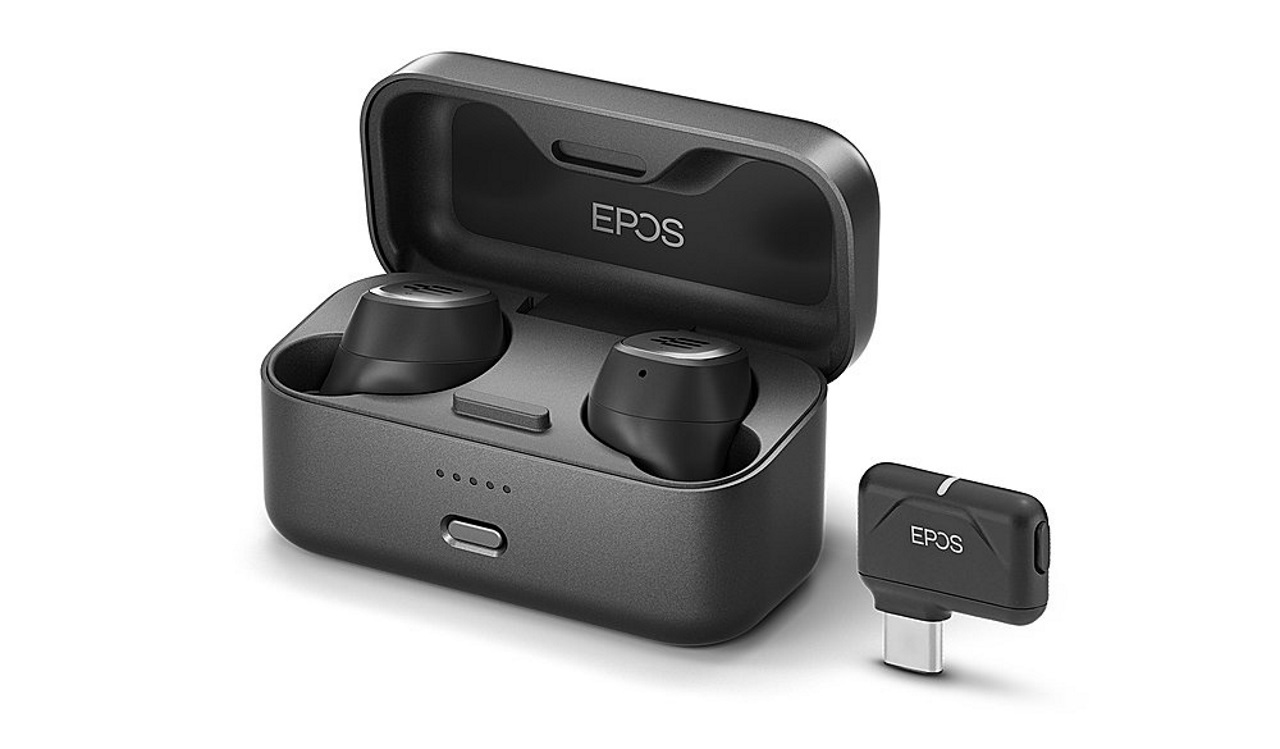 Switch Lite, lack any hole for charms or lanyards, so you might have to get creative in finding a spot to store it, as there isn’t a hook on the charging case.

According to EPOS, the earphones can last up to five hours on a charge, and the case provides an additional 20 hours of listening time. This is in line with other true wireless earphones, but a bit on the low side.

The earphones can work directly with any phone, tablet, or computer that supports Bluetooth. The USB-C dongle expands that support to the Nintendo Switch and Switch Lite, and adds high-quality aptX audio streaming to any Android phone that doesn’t currently support it. It also works with the PlayStation 4 and PCs, and includes a male-USB-A-to-female-USB-C extension cable so you can use a standard USB-A port with the dongle on those systems (this is in addition to the male-USB-A-to-male-USB-C cable included for charging the case). While not officially supported, I successfully tested the dongle with a PlayStation 5 and it worked without any problems.

While the earphones can connect to a paired Bluetooth device or to the dongle, they can’t connect to both at once. This is a missed opportunity, because being able to take calls or listen to music while also listening to audio on your Switch would have been a very useful feature.

While there’s a built-in microphone for making calls, it isn’t intended for use in competitive gaming. As in, the microphone doesn’t work at all when used with the USB-C dongle for aptX streaming. Over a Bluetooth connection to a phone, the microphone sounds fairly clear, but it still has that distant, speaking-into-a-bucket sound many true wireless earphones have.

How We Test Headphones

The opening acoustic guitar plucks in Yes’ “Roundabout” get plenty of resonance to sound full and rounded, along with enough high-frequency finesse to bring out a bit of crisp string texture. When the track properly kicks in, the bassline settles just a bit in the background, while the vocals get most of the attention. The bass isn’t lost in the mix, though, and the guitar strums and drums all find enough presence to make the track sound balanced.

The Crystal Method’s “Born Too Slow” sounds excellent through the GTW 270 thanks to strong bass and high-mid frequency response. The screaming vocals and guitar riffs sit squarely in the center of the mix, while the backbeat receives enough low-end presence to drive the track. Once again it’s a full, balanced sound that provides a good amount of thump, while lending enough crispness to make the higher-frequency instruments easily discernible in the mix.

The USB dongle worked well with the Nintendo Switch and Switch Lite in testing. I plugged it into each machine and put in the earphones, and the two connected within seconds. The Monster Hunter: Rise demo was excellent through the GTW 270, with the sounds of nature lilting through with plenty of detail. While the earphones themselves don’t have any simulated surround, the game’s stereo provided a good sense of space and directionality.

The EPOS GTW 270 earphones set themselves apart from the crowd with a USB-C adapter so you can use them with your Switch and some other platforms without Bluetooth. The gaming aspects feel secondary, though, from an adapter that can’t safely tuck into the charging case, to not being able to use the microphone when playing. Basically, this isn’t really a gaming headset, but a solid pair of wire-free earphones you can use with a few extra devices. If that isn’t a big selling point for you, you can get better sound quality and battery life for a similar price with the Jabra Elite Active 75t or the Harman Kardon Fly TWS.