Elyse Steinberg directed “The Fight” with Josh Kriegman and Eli B. Despres, her partners at Edgeline Films. The film offers an up-close look at four recent ACLU (American Civil Liberties Union) legal fights. The cases concern the separation of immigrant families; the abortion rights of an undocumented teenager; whether the federal government would be permitted to include a citizenship question on the 2020 census; and the Trump Administration’s ban on most transgender people from the military. Kerry Washington and Pilar Savone of Simpson Street co-produce.

Steinberg and her fellow “Fight” filmmakers previously collaborated on the documentary “Weiner,” a Sundance Film Festival Grand Jury Prize winner and BAFTA nominee. Together, they created, co-directed, and executive produced the critically acclaimed Showtime docuseries “Couples Therapy,” which has been renewed for a second season. Steinberg also directed PBS’ acclaimed doc “The Trial of Saddam Hussein.”

We talked to Steinberg about “The Fight,” working with the ACLU, and why the film should be seen prior to the election.

“The Fight” is now in theaters and available on VOD. Find screening info here.

This interview has been edited.

W&H: “The Fight” premiered at the Sundance Film Festival in January. What was the response like there?

ES: Sundance was incredible. It was just one of the highlights of my professional life. We had worked on this film for over three years, and Sundance was the first time we ever showed it to an audience. All the lawyers featured in the movie were there, and we had the crew who had been working on it for years there, too. We had been working on it for so long; it was like bringing a child into the world. It was an incredibly emotional experience. We felt lifted. I know the lawyers did, too, and so did the filmmaking team, from the reception that we got from all of our peers in the room. We got a standing ovation and there were a lot of tears and laughter. The lawyers are often in their own world fighting this good fight, so to step outside for a moment was energizing.

W&H: The film is indeed very timely as we near the 2020 election. Was the timing of its release at all intentional?

ES: Absolutely. We set about making this film right after Trump was inaugurated. We wanted to document the next three years. The lawyers took up the fight against the Trump Administration so we wanted the film to come out in 2020, in the months leading up to the election. We wanted to energize voters to understand the stakes of this fight, of this election. We knew that this film could be an invitation for hope and inspiration for so many voters. I had personally felt very hopeless and demoralized after Trump was elected. I wanted to spend my time with people who were fighting back against the historic assault on civil liberty and law. We hoped that people could get some of that inspiration and get the feeling of what it’s like when the good guys win. No matter what, their voices and action have made a real difference.

W&H: How did you connect with Kerry Washington as a producer of this film?

ES: She had watched the first scene taking place on the courthouse’s steps when Trump was striking down immigration rights with the Muslim ban. I was there on those steps, and I saw Lee [Gelernt, an ACLU lawyer who specializes in immigration rights,] and it was then that I said this was the film I want to make. Kerry saw that scene unfold on television and said to herself, who’s the documentary crew that’s going to make this film? She called her agent, and they told her that the team behind “Weiner” was working on it, and she called us.

Kerry has been with us since the early stages of the film. She’s an incredible producer and has been a champion for this film from the beginning, along with her producing partner, Pilar Savone. They would call me weekly and say, what can we do, how can we help? There were different challenges at each stage, from fundraising to post-production to finding the right music supervisor. They have been there at every step.

W&H: How did your partners respond to the idea of making this film?

ES: At the time, we didn’t know what our next project would be after “Weiner.” We had some other things we were developing. I felt like Dale Ho, the lawyer in the film [who supervises the ACLU’s voting rights litigation nationwide], who said about being a civil rights lawyer, “If not now, when?” If I’m going to be a documentarian filmmaker at this historic moment in time, I had to get in there and document it. I wanted to be with the heroes.

Personally, my mother was a litigator for human rights, so I had always been interested in legal stories. I had done a few pieces for PBS about lawyers and legal fights. I felt this was a fight I had to document. We have a whiteboard in the office, and I came in and wrote “The Fight,” and I said this the name was our next film. And Josh said, “Yes, you got it. That sounds like a good one.”

W&H: You start with the inauguration of Donald Trump, making his oath in office, committing to protect the Constitution of the U.S., which is the work of the ACLU. He launches right into measures that keep out immigrants, limit abortion rights, take away transgender rights in the military, and restrict voting rights. How did you choose to focus on these four particular lawyers and these issues?

ES: We came to the ACLU, and we told them that we wanted to film every aspect of their key lawyers at work and home. We wanted to have strategy sessions. Let us document this moment. They said, “Thank you, we appreciate your interest, but there is no way you will ever document the ACLU.” We came back and said we could make this work. Over the next few months, the ACLU started to recognize its importance.  The cases in this film are the major ones the ACLU has fought during this Administration, and these are the exact lawyers who fought them in court.

We also were looking for lawyers and subjects who had that visceral crackle documentarians are chasing and are at the top of their game. We wanted to capture people who are authentic on the camera, who, when they feel something, can see it. They are superheroes with super skills but also just regular people going through daily struggles and showcasing that. 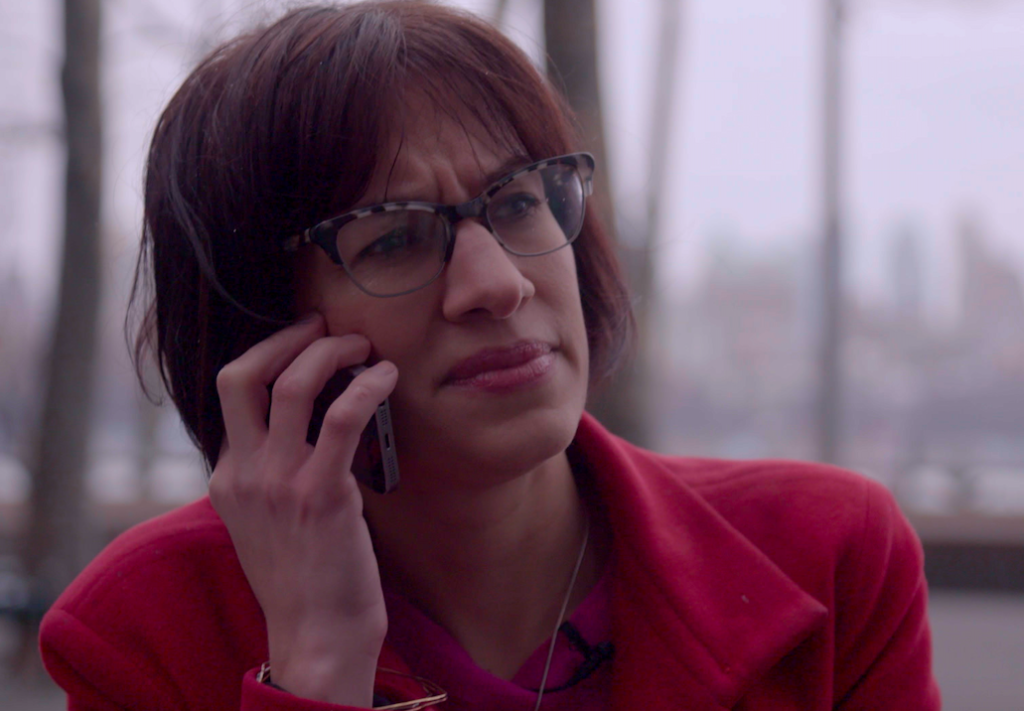 W&H: Let’s talk about Brigitte Amiri, the reproduction rights lawyer at the ACLU. What was it like following her and watching her work?

ES: I’m obsessed! When you make a documentary, you are signing up for a long-term relationship. I felt with Brigitte, along with others, that she’s someone I want to hang out with. I told her that I couldn’t believe it was my job to watch her work. She felt she spent more time with us than her husband and child. It was incredible to watch her work, and her work is so important. I felt like I was watching history unfold at this moment. Whether she’s rushing to the printer or the train after she gets a historic decision, these are the moments I live for as a documentary filmmaker.

W&H: You featured tough stories like Lady Doe, the 17-year-old rape victim denied an abortion at a Refugee Resettlement facility, and Miss L, the mother who was separated from her daughter for five months and managed to reunite. That harrowing scene of them lying on top of each on the stairs ends the film. What was it like hearing their stories?

ES: The moment Miss L gets reunited with her daughter showcases the pain brought by this Administration. You get to see a mother reunited with her daughter, and you see at that moment the real shock and horror of what the practice of separation means. We knew there was nowhere to go with that scene but at the end of the film. We wanted that moment to remind us of the stakes of this fight and what is possible. Lee was able to win an order to reunite families and get that policy changed.

W&H: You work with two men. How do you divide and conquer the responsibilities?

ES: We have a production company called Edgeline Films. Our roles on each project are different. On this project, I was in the field 90 percent of the time. Eli edited the film with the chief editor. We all work as a unit with different capacities. I had a relationship with the lawyers, so I needed to be in the field. But we all make each other better. I’m a very collaborative person, and I like working with people. Our ideas bounce off each other, and something better happens as a result. It also happened with “Weiner.” Each person has a different outlook and vision, and we wrestle and make it better.

W&H: Has this film influenced the types of projects you want to work on in the future?

ES: I think this is the most important work I have ever done. There’s no question about that. Since my childhood, I’ve looked at people doing things and have wondered what it’s like inside these types of situations. Here you get to go in and see the way it’s done. You realize these lawyers are incredible people, truly David & Goliath people with duct tape and paper clips. They’re so scrappy. You don’t need much to do these fights. The small little guy with the slingshot can take it down and do something extraordinary. It’s just a guy who can’t charge his phone, making considerable changes in the world.