Big-screen convertible laptops are heavy and ungainly to use as tablets, with their screens folded completely behind the keyboard. But plenty of people still opt for big laptops like the Dell Inspiron 15 7000 2-in-1 Black Edition for other uses. With a 15.6-inch 4K display and a built-in holder for the included digital stylus, it could serve as a capable canvas for digital artists. But competition in this laptop category has heated up since we last reviewed the Black Edition in 2019, and while the new model ($1,567.99 as tested) is an improvement, packing one of the first implementations of Intel’s Iris Xe Max discrete graphics, it can’t match the excellent HP Spectre x360 15 on value, performance, or features.

Dell doesn’t currently offer a 2-in-1 convertible version of its XPS 15 laptop, so the Inspiron 15 7000 2-in-1 Black Edition is the company’s most premium large-screen convertible for consumers. The “Black Edition” moniker evokes this premium perch in the lineup, but it also is a literal description of the machine itself. Unsurprisingly, the Black Edition is quite black, though not inky. The paint scheme, which Dell calls “Element Black,” actually has a hint of shininess, and appears almost silver in bright light, as you can see below. That makes the Inspiron look sleek and modern, rather than stodgy and corporate. 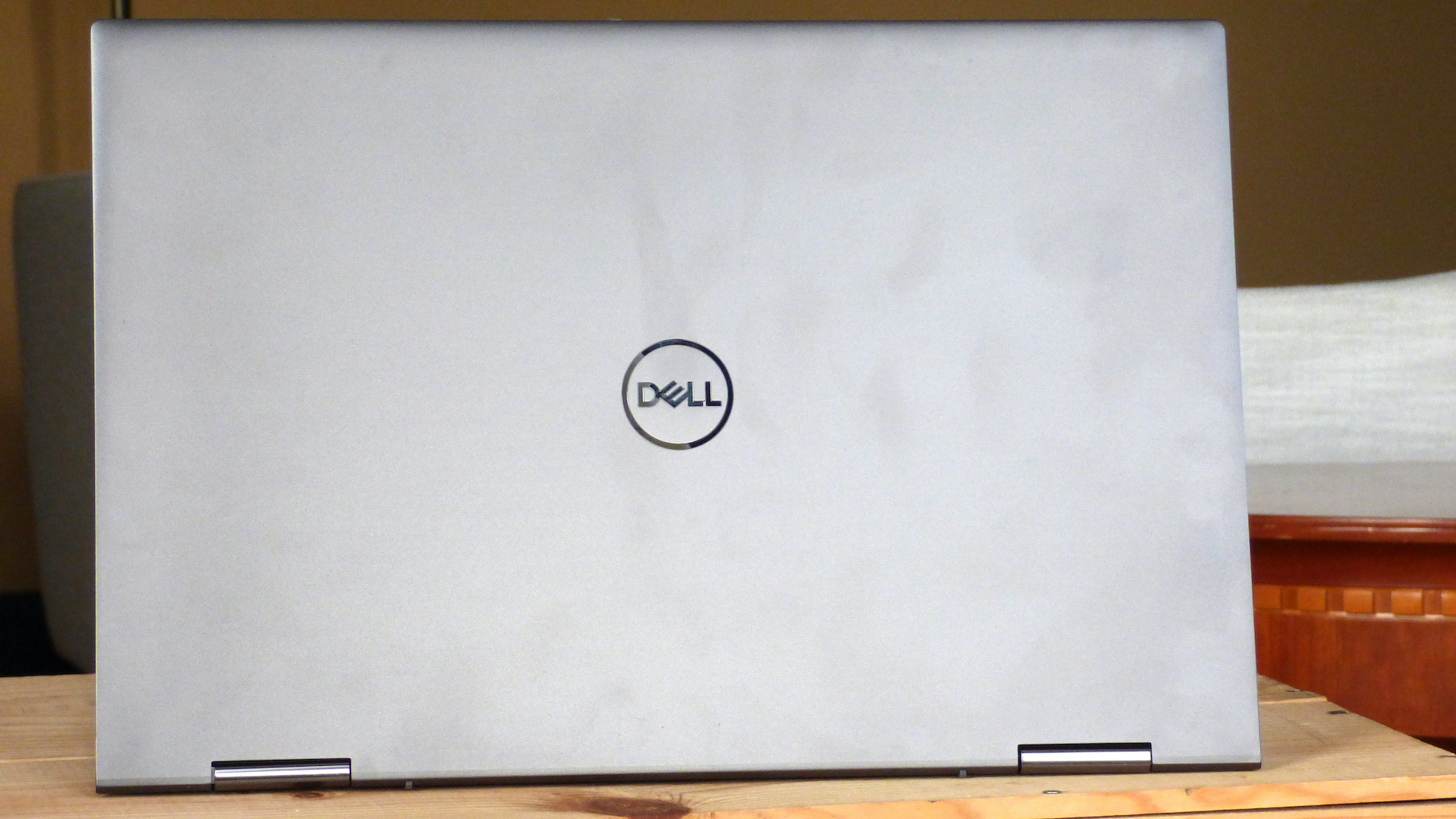 Lenovo Yoga C940, its other main competitor in the 15-inch 2-in-1 arena. The XPS 15 is also roughly the same size and weight. 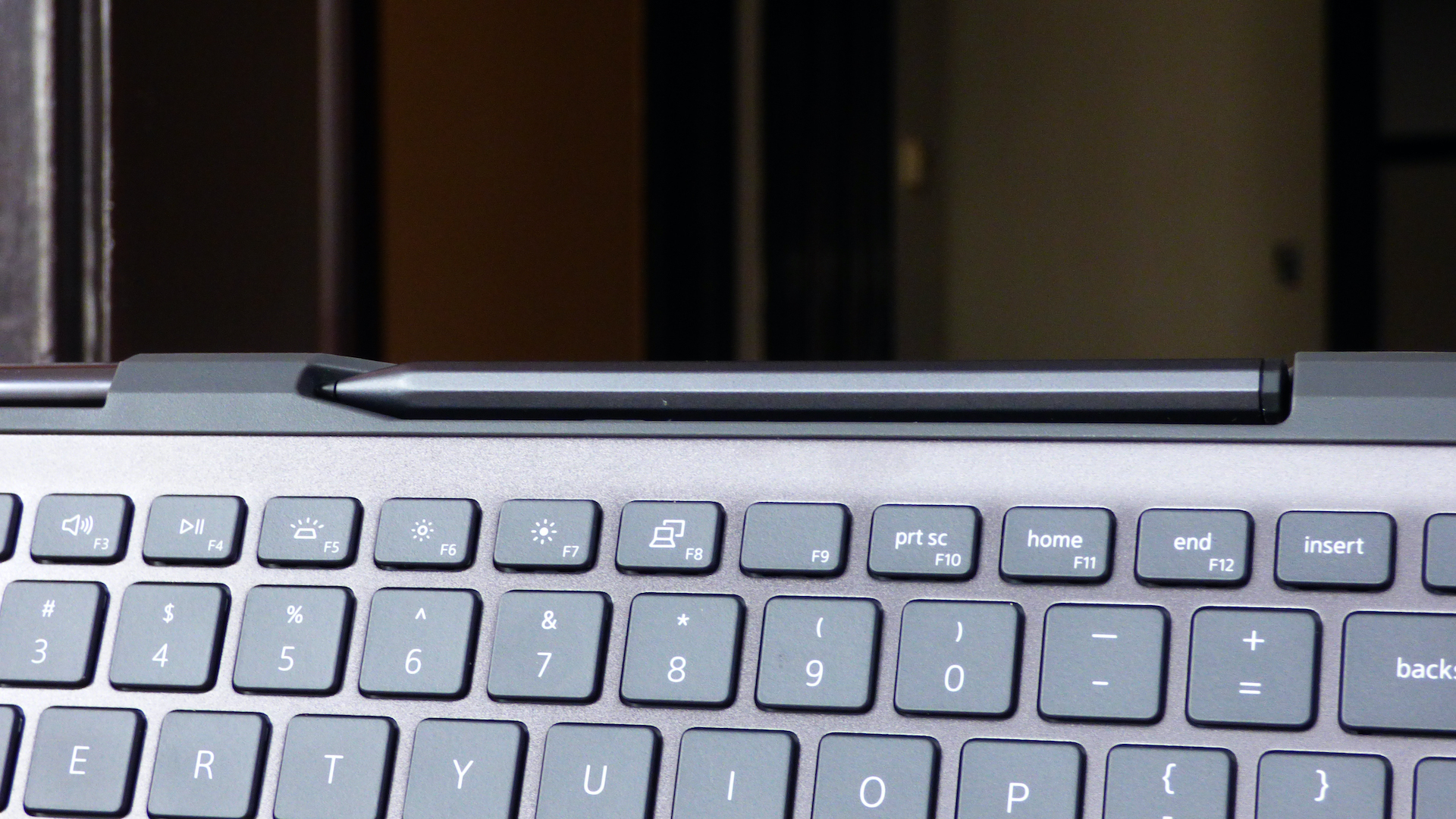 Microsoft Surface Laptop 3 measures 0.57 by 13.4 by 9.6 inches and weighs 3.4 pounds. These machines are lighter and easier to hold with one hand, but since you can’t flip the screen over, the added portability isn’t as useful. Such is the paradox of large-screen convertible laptops, which has some exceptions but generally holds true. You can either have a heavy, flexible laptop or a lighter, slimmer one that doesn’t have a convertible hinge and therefore isn’t as flexible.

A bit of added heft should go hand in hand with a sturdy, well-built, and well-engineered chassis, and the Black Edition does not disappoint on this front. The build quality is rock-solid, with minimal flex in the keyboard deck and the display. The hinge is satisfyingly stiff, with a screen that hardly moves when you tap or draw on it.

Tapping on the display is the Black Edition’s signature feature (other than the striking black color scheme). You can do it with your fingers, or with the included digital stylus, whose prominent home in a groove beneath the screen means it’s always close at hand. There’s a lot to like about the stylus, which magnetically attaches to its storage dock without cajoling, and even recharges its internal battery while it’s stored. It has the standard 4,096 levels of pressure sensitivity we expect from premium digital pens, as well as tilt detection and a button to activate the eraser feature in some apps. The Black Edition’s digital pen, which isn’t available on the standard Inspiron 15 7000 2-in-1, also has some drawbacks. It’s much smaller than a standalone digital stylus like the Apple Pencil or the Microsoft Surface Pen, so it may be difficult to use for artists already accustomed to a larger accessory. While its decagon profile prevents it from rolling off your desk when you set it down, I found it uncomfortable to hold for extended periods. The many ridges started digging into my middle and index fingers. 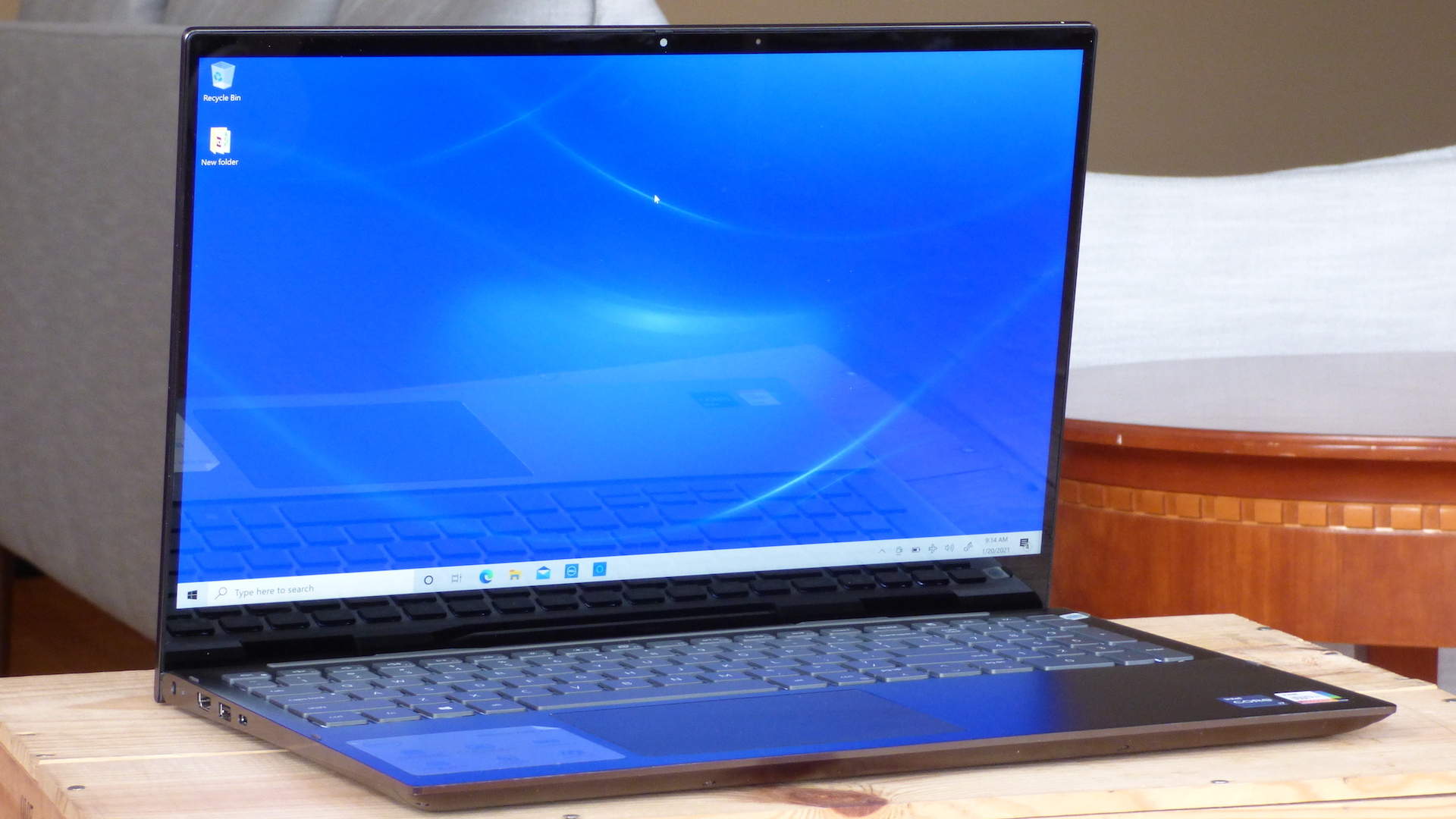 Dell XPS 13 whose base configurations come with lower-resolution full HD displays. Dell says it can deliver the entire sRGB color spectrum, and colors did indeed appear brilliant while I watched short YouTube clips. The panel also features Dolby Vision HDR, for inkier blacks that are in keeping with the Black Edition theme.

The only downside to the screen is its relatively low maximum brightness level of 300 nits. I kept the brightness turned up to the maximum during my entire time testing the Black Edition in daylight hours.

An Uncomfortable Keyboard and Touchpad

Above the screen, there’s a webcam that offers adequate quality for informal videoconferencing in brightly lit rooms. It also features IR sensors for face recognition. This lets you log in to your Windows account without typing your password. As an added bonus, the IR sensors that flank the camera lens leave enough room for a sliding privacy door, which provides extra peace of mind for people who are constantly videoconferencing throughout their day of working from home.

You can also log in to your Windows account using the power button, which has a built-in fingerprint reader. The button is located in the upper right portion of the keyboard, above the dedicated number pad. Spreadsheet jockeys will appreciate the dedicated number pad, once a standard feature on 15-inch laptops. But the reason the number pad is disappearing on such laptops is painfully apparent on the Black Edition, whose board feels cramped to accommodate the extra keys on the right. I would have preferred standard-size keys instead, though your preference may differ depending on how much you type and how often you need to enter numbers. 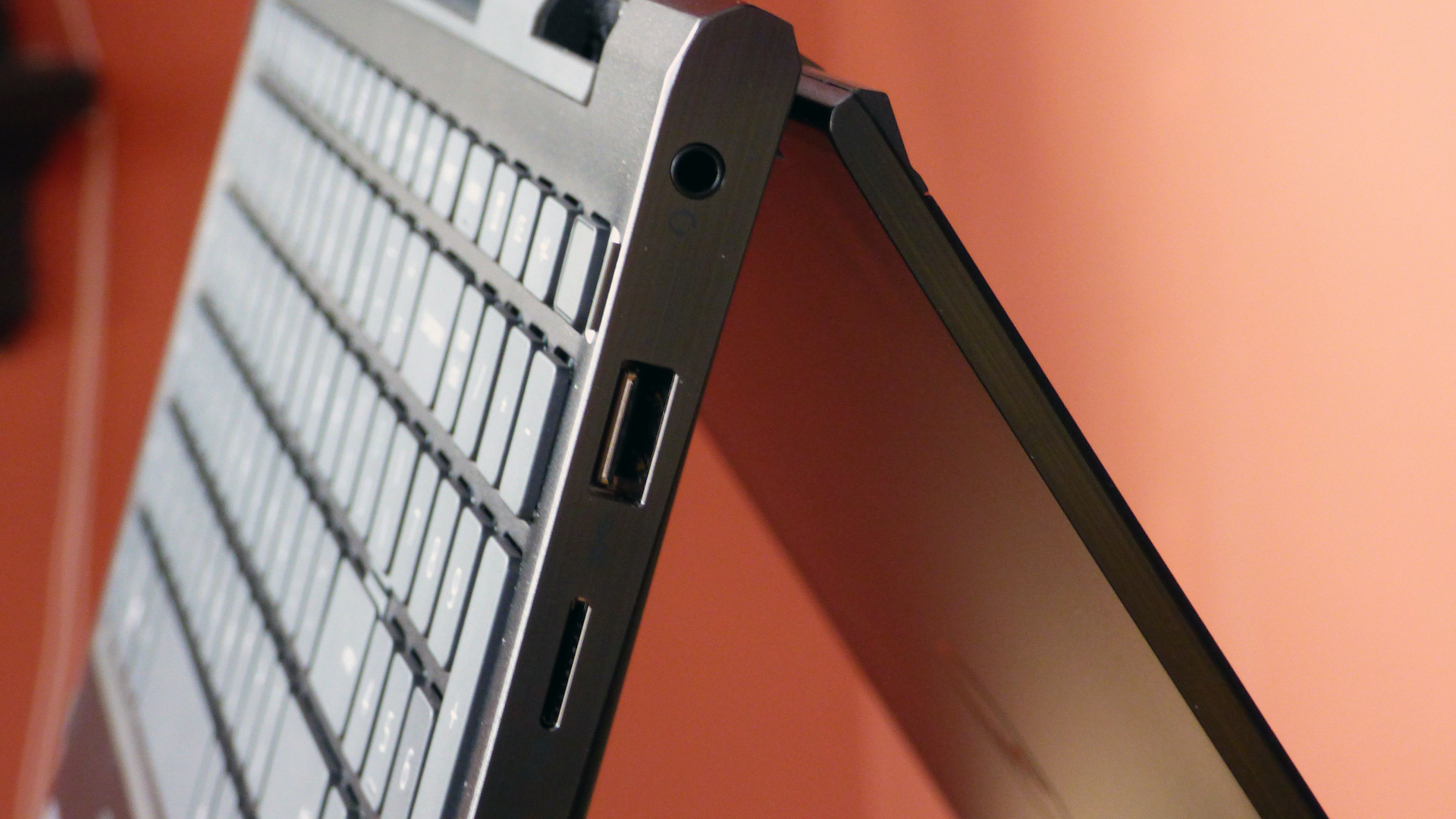 how we test laptops.)Graphics capabilities are also limited. While the Inspiron does have the upgraded “Max” version of Intel’s Iris Xe graphics silicon, performance is still much less than you can expect from an entry-level gaming GPU like the Nvidia GeForce GTX series. To see how the Black Edition’s specs compare with its predecessor and some of its key competitors, check out the chart below. Both the Spectre x360 15 and the Yoga C940 are equipped with the potent combination of an H-series Core i7 and a GeForce GTX 1650. 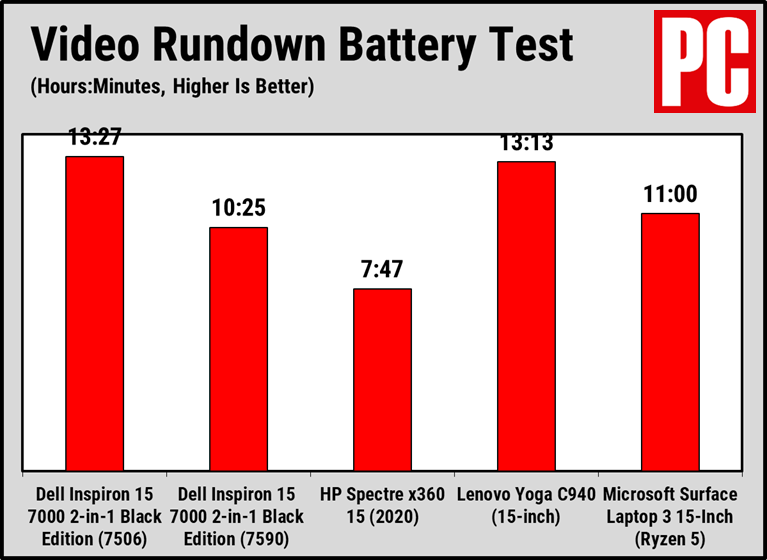