Reddit has intervened to stop a “hostile takeover” of r/wallstreetbets from a group of moderators who were allegedly trying to cash in on a movie deal.

Behind the scenes, a power struggle for control of r/wallstreebets erupted on Wednesday when the oldest moderators of the forum booted over a dozen newer mods from their duties. The banned moderators then accused the old guard of selling out, and conspiring to secure a lucrative movie deal about r/wallstreebet’s role in the meme stock craze. “They (the old mods) left for years and came back when they smelled money,” wrote “zjz,” a banned moderator.

In a now-deleted post made on Thursday, one of the oldest moderators, “grebfar,” admitted a movie deal was in the works. “We were planning on waiting to announce this once we had everything lined up, but yes we have been approached by producers regarding a potential movie and many of the other mods were a part of those conversations,” grebfar wrote.

“What wasn’t shared though, was that we are planning to donate any proceeds from this (if any!) to charity. Claiming this as evidence that we are attempting to ‘monetize the sub’ is extremely dishonest,” grebfar added. 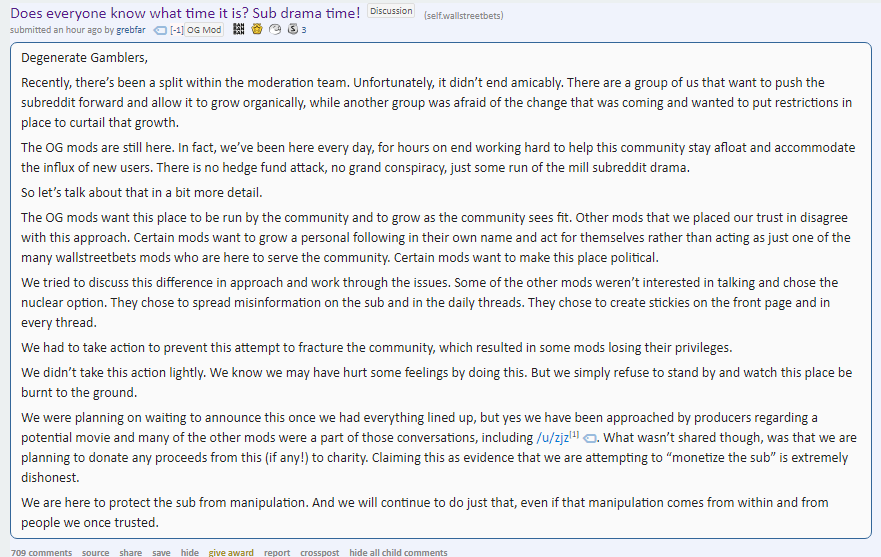 guidelines on maintaining a healthy online community. The infractions include removing the other mods without proper notice, and failing to maintain a fully equipped moderation team for r/wallstreetbets that could efficiently regulate the community.

Reddit is now working with the remaining moderators on r/wallstreetbets to bring back order. This includes restoring privileges for several mods who were booted during the infighting.

“We are here for the community, not the other way around,” wrote the moderator “bawse1,” who was previously kicked off the forum. “The ones who didn’t understand are finally gone. Those of us who remain are left to repair the tarnished culture of moderators past.”

The infighting occurs as the meme stock craze loses momentum. GameStop, the major stock r/wallstreetbets was supporting, has seen its share price fall from $325 to $72 in a week, causing heavy losses for late backers of the stock.

However, bawse1 said the mod team is focused on becoming “one cohesive unit in support of the largest community of traders, investors of all ages, and experience.

“When we help each other, support one another we can all persevere through anything. That how we win. [sic] Winners give off an aura that fuels phenomenal growth in our community as well as our wallets,” bawse1 added.