As usually happens at this time of year, all of the big PC vendors (and lots of smaller ones as well) announced updates to their lines of PCs at this week’s virtual CES 2021 show.

Every year, this is driven largely by chip technology refreshes, and that’s certainly a part of what we’re seeing this year, with Intel announcing its 11th Gen Core (“Tiger Lake”) vPro Procesors for the business market, and its Tiger Lake-H Mobile Processors for Gaming, and mobile processors for gaming, AMD announcing competing Ryzen 5000 Mobile processors, and Nvidia bringing its latest GeForce RTX 30-series (“Ampere”) graphics to laptops.

One difference this year is that many of the new designs have been influenced by the changes in work brought by the pandemic. Many of the vendors talked about a new hybrid remote/office model for working, with features such as improved webcams, noise-cancelling microphones, and improved audio.

I mostly focus on enterprise machines (see my roundup of the various enterprise lines), which I’ll do here, but I’ll mention some of the other machines that caught my eye as well. 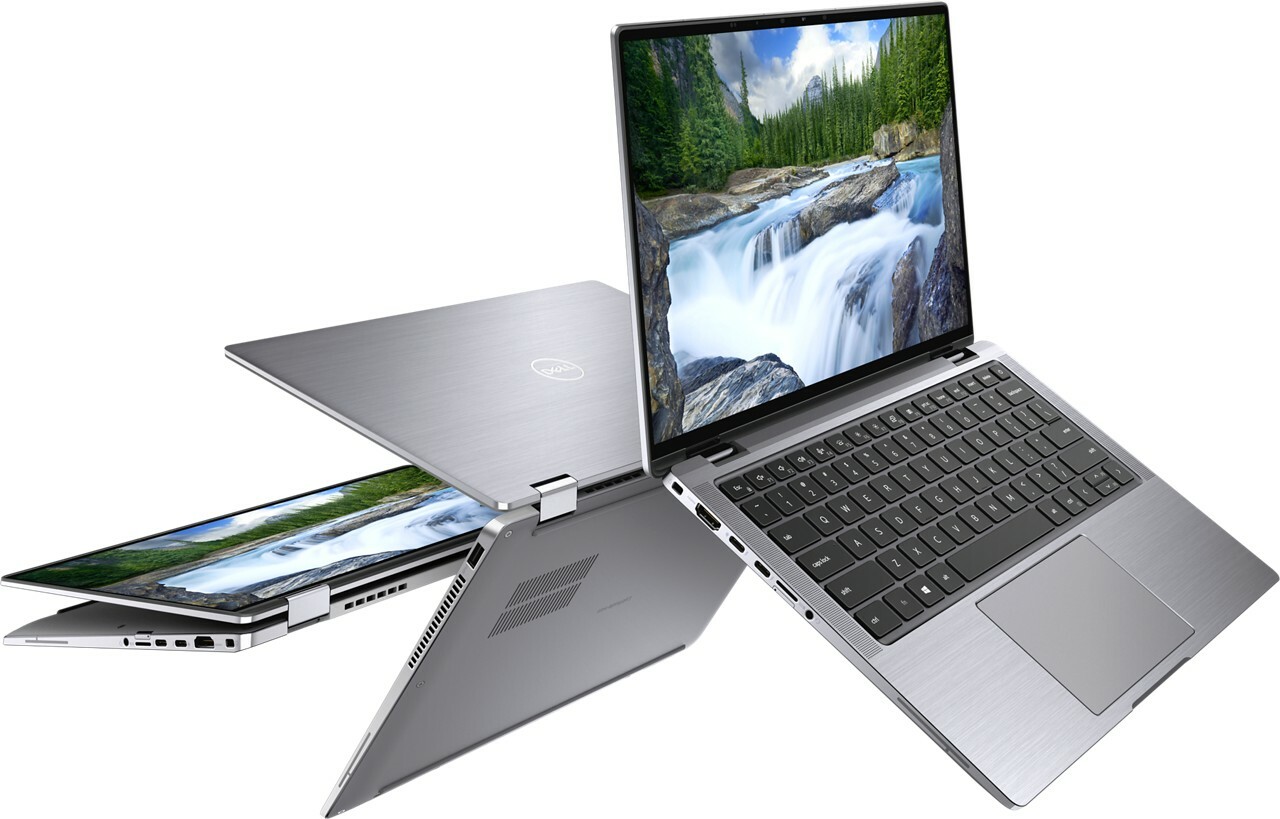 Dell Latitude 9420, a 14-inch laptop with a 16:10 aspect ratio, available either as a laptop with a FHD (1920 by 1280) display or a convertible 2-in-1 with a QHD (2560 x 1600) display. New features include SafeShutter, which automatically opens or closes the webcam when you launch particular applications along with secure camera and mic mute keys.

Other features for video conferencing include two top-firing speakers and another two bottom-firing speakers for a full surround sound effect, as well as four noise-cancelling microphones to reduce background noises. This model includes a ComfortView Plus display to reduce Blue Light, as well as a 5G option. Dell was one of the first to move to 16:10 displays with smaller bezels, which give you a bit more vertical space than the now standard 16:9 ratio. 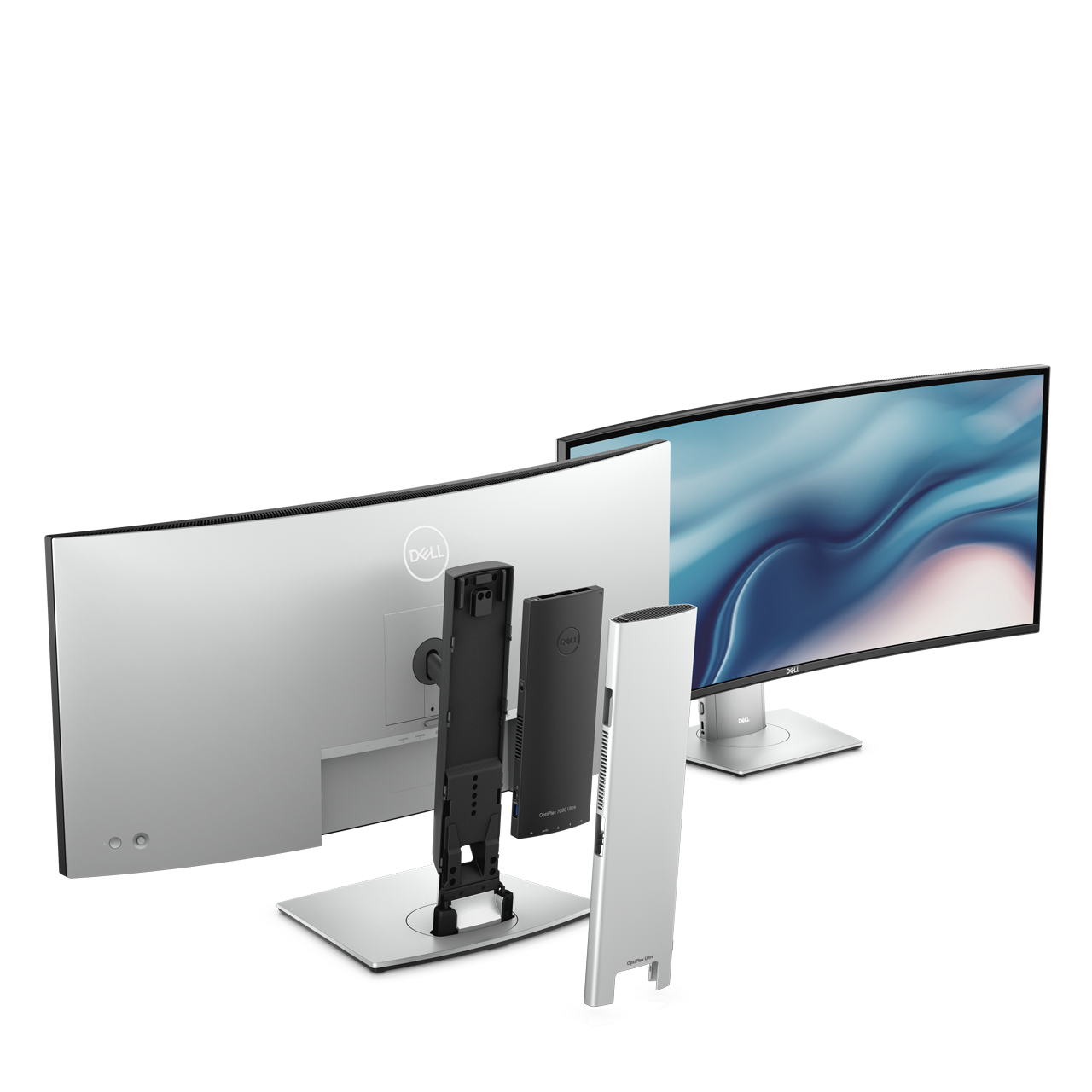 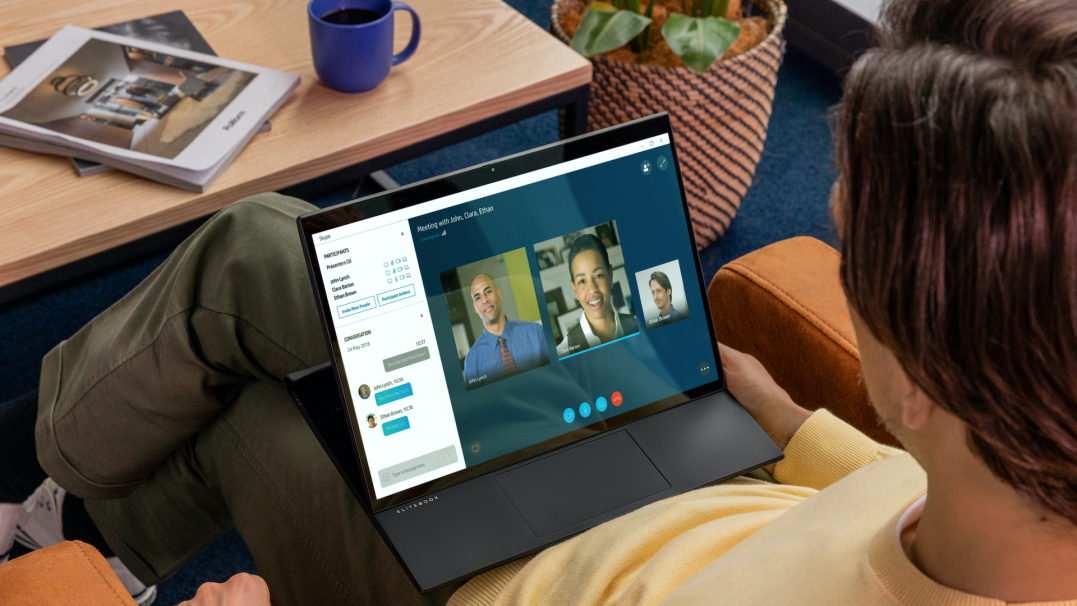 Elite Folio, a more commercial version of the Spectre Folio, the interesting leather-like-bound notebook it introduced in 2019, with its “pull-forward” screen that you can place in front of the keyboard, or use as a tablet, with an included pen. The Elite Folio is based on the Qualcomm Snapdragon 8cx platform, with optional 5G connectivity.

More conventional but still flashy are updates to the Elite Dragonfly, a 13.3-inch 2-in-1 laptop that starts at just 2.2 pounds. (Here’s my review of the previous version.) The new G2 version adds the Tiger Lake processors, a 5G option, a Sure Shutter button on the keyboard for turning off the webcam, and built-in support for Tile. 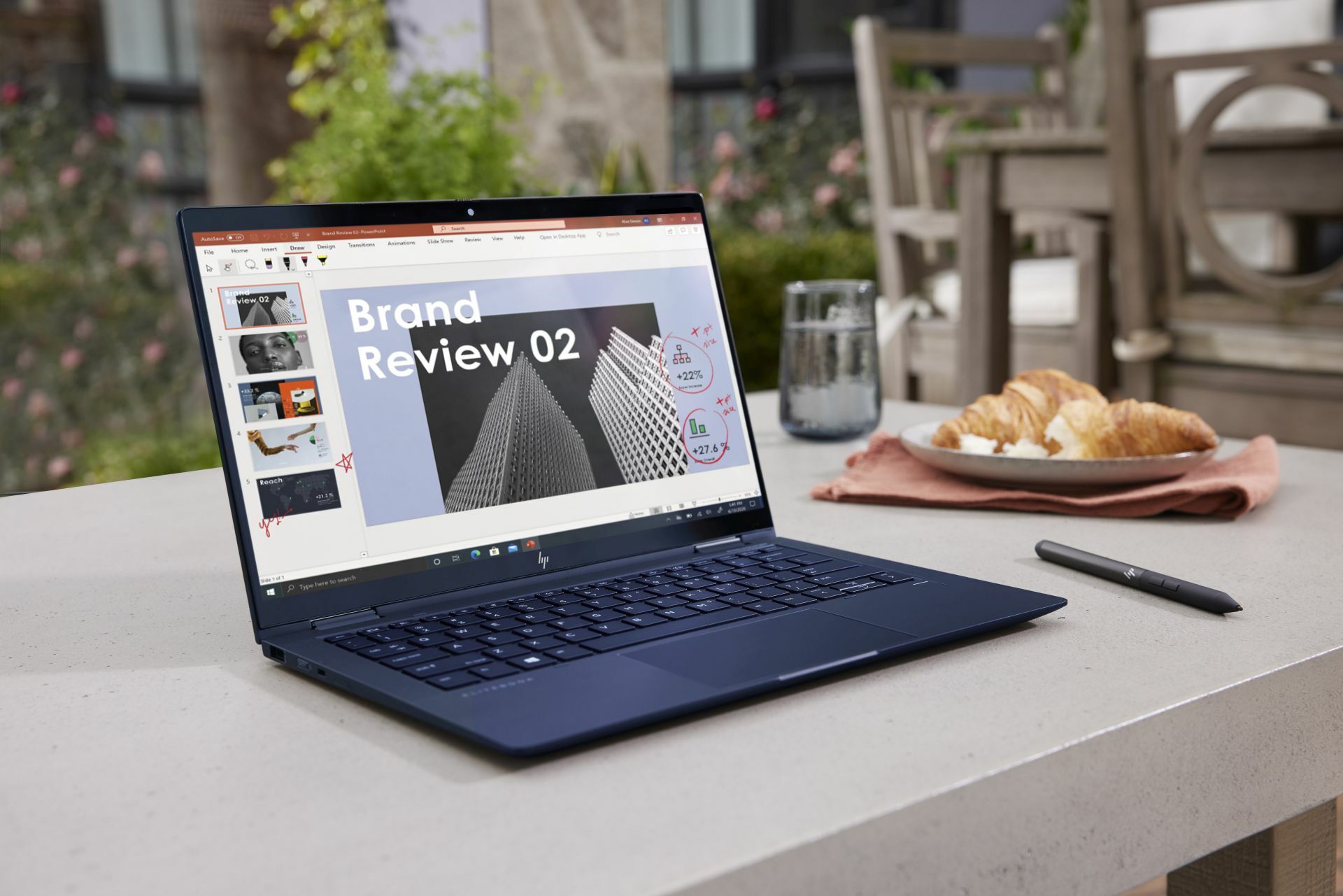 EliteBook 800 and 1000 notebooks to have Tiger Lake options fairly soon.

On the consumer side, HP announced an upgrade to its Envy 14 to include the Tiger Lake processor, as well as an option for Nvidia GTX 1650 Ti-Max graphics. This now has a 16:10 display and a selfie light to improve your look on video conferencing. Other features include improved cooling and AI noise removal.

Lenovo also has a number of different lines, and it announced new products in all of them. For its business-focused ThinkPad line, Lenovo added the new Intel processors. This week’s announcements mostly focus on its thinner, more premium products. Lenovo said it was focused on collaboration with these announcements, with all the products offering 5G options, and most offering blue-light screens and presence detection. 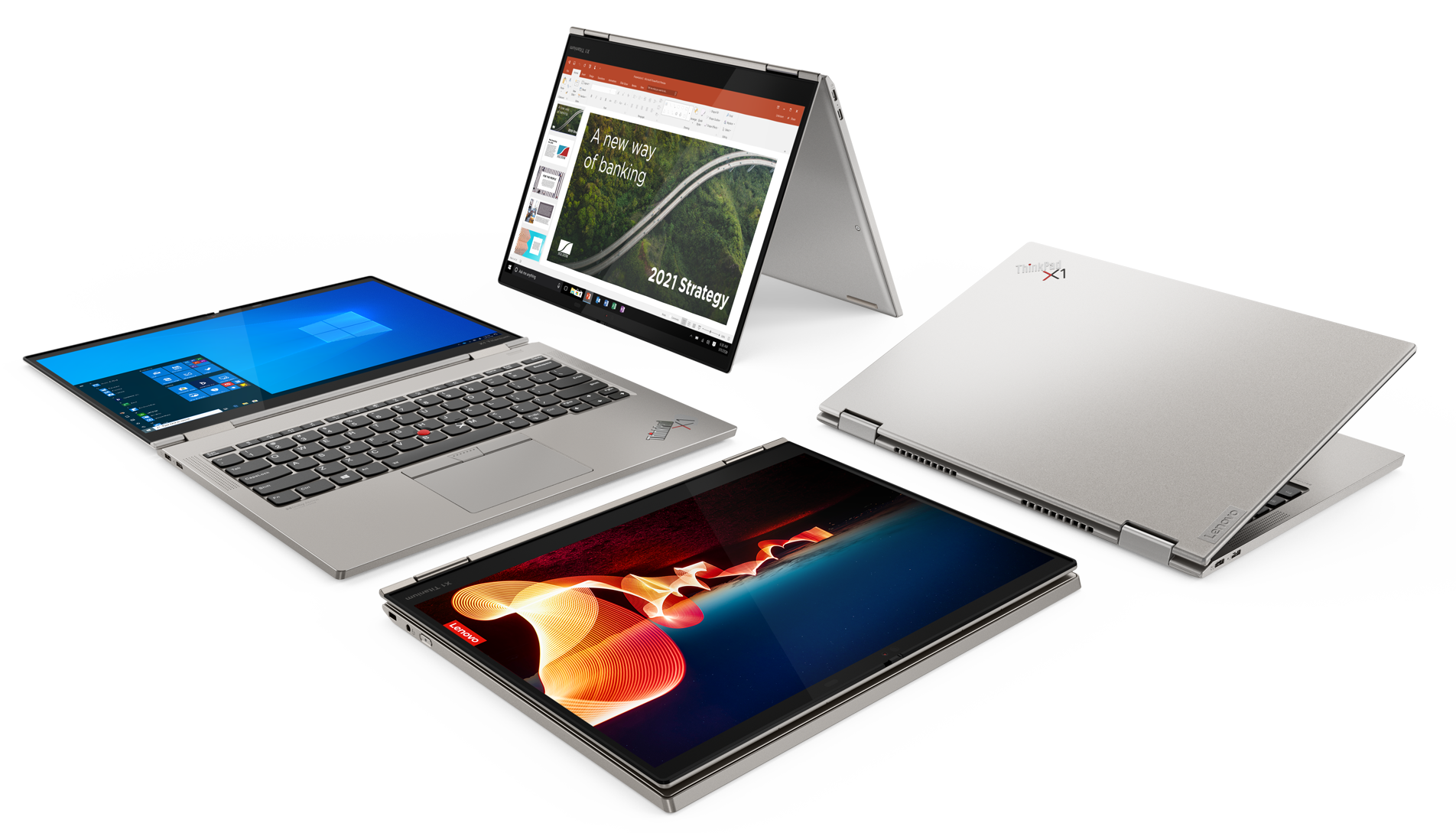 X1 Titanium Yoga, which at 11.4 mm thick is Lenovo’s thinnest 2-in-1 convertible. It has a 13.5-inch 3:2 display and weighs 2.54 pounds. Unlike most ThinkPads, this is available only in a Titanium chassis, not the classic matte black. It features a new keyboard design, and has only two Thunderbolt 4/USB-C ports. It’s not cheap, but statement laptops rarely are. 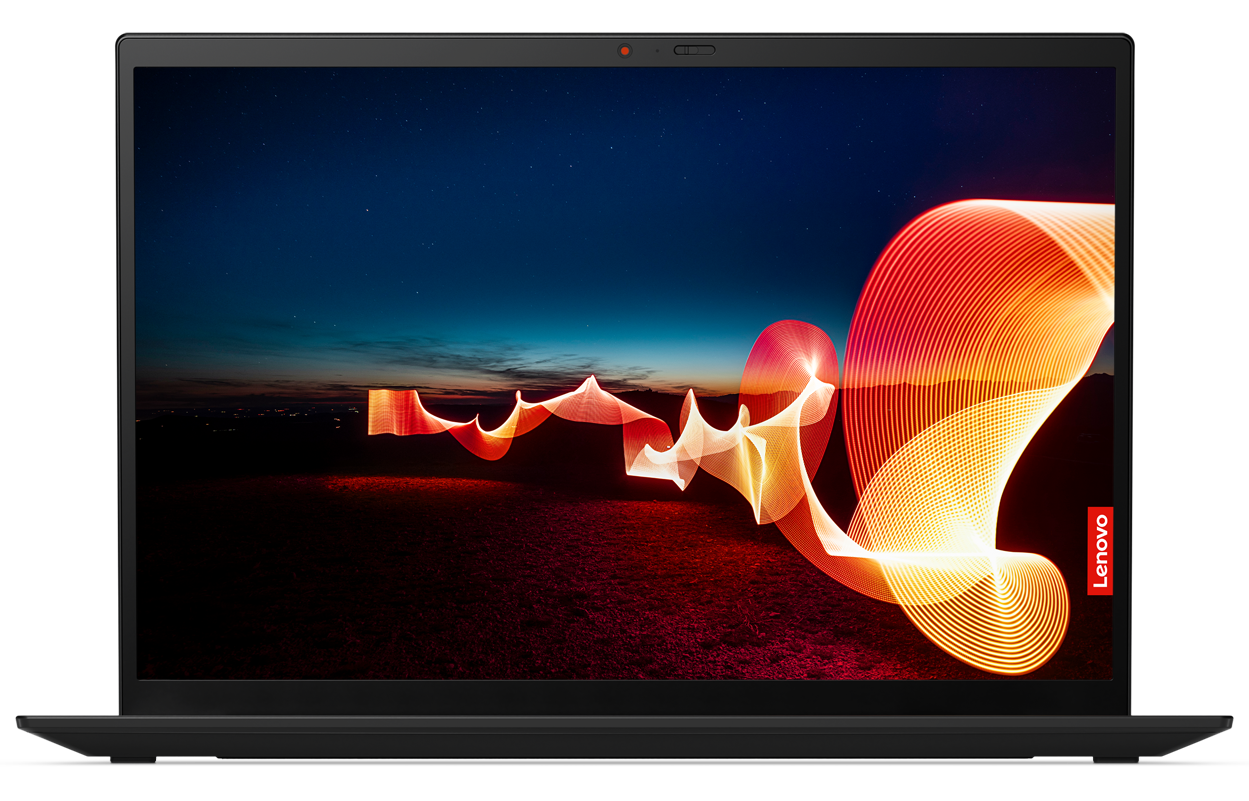 X1 Carbon Generation 9 and X1 Yoga Generation 6 have been redesigned, but still look much more like the traditional ThinkPad, although with a bunch of new features. (The X1 Yoga is essentially the 2-in-1 version of the X1 Carbon). Both now have a 14-inch 16:10 screen with low blue light feature, which offers more depth than the 16:9 screen on the current model. The fingerprint reader has been moved to the power button on the X1 Carbon and to the top on the X1 Yoga, and both versions now add a presence detection option, so it can lock when you leave the machine and unlock when you get close. These models add Dolby Voice for better audio quality on conference calls. (Here are my reviews of the previous X1 Carbon and the 2019 X1 Yoga).

Also new is the ThinkPad X12 detachable, a 12.3-inch tablet with an FHD display and a keyboard cover that attaches magnetically, along with a pen. Detachable tablets that turn into laptops with a keyboard are a small part of the market, but as with the Dell announcement, we seem to be seeing more of these. 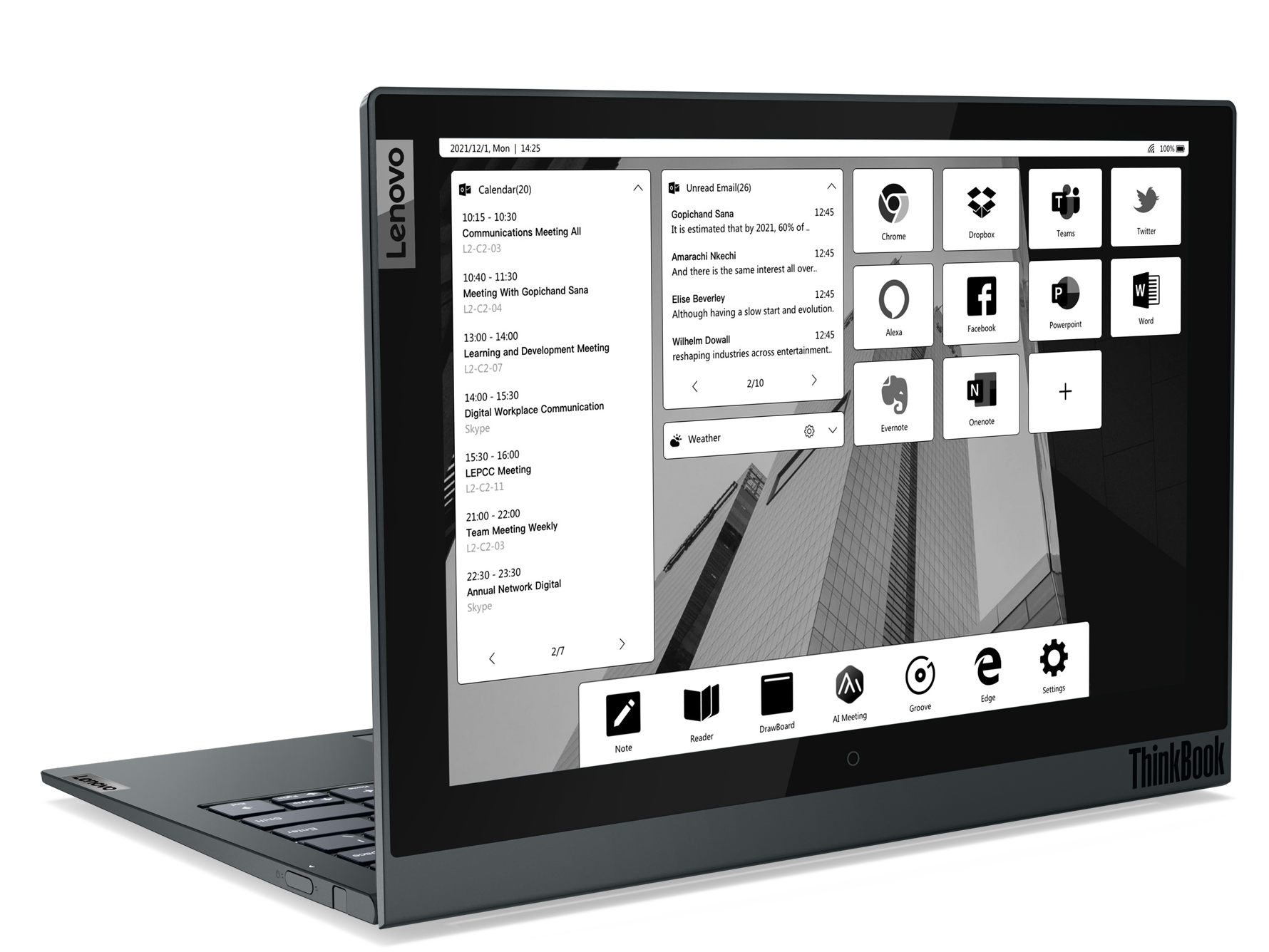 ThinkBook Plus Gen 2 i, which has a 12-inch e-ink cover display in addition to the normal 13.3 inch IPS main display. An earlier version had a smaller e-ink display, but this one has been redesigned with a new interface and the ability to run Windows applications. This will run the Tiger Lake processors, and includes a pen that fits inside.

Other new units include the ThinkBook 14p and 16p, both of which gain new AMD Ryzen 5000 mobile processors. They both include Ai-based noise cancellation, and the 16-inch version adds an Nvidia RTX Laptop GPU option. On the Intel side, there’s a new ThinkBook 13x i, a 13-inch laptop that starts at 2.5 pounds and now adds the new Intel processors. 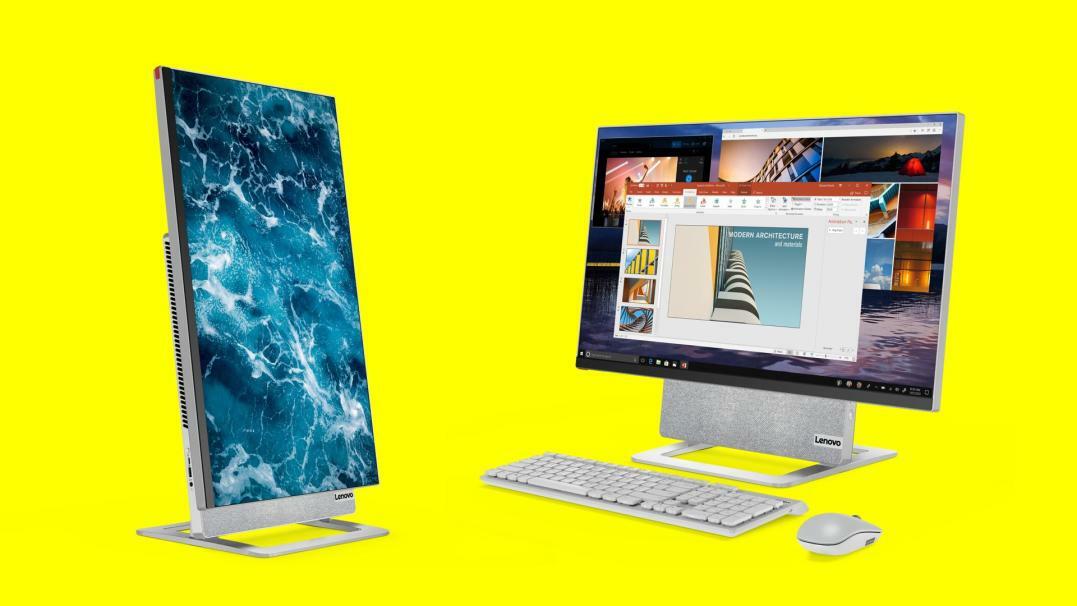 the Yoga AIO 7, an all-in-one desktop that features a 27-inch display that rotates, so it can be either in portrait or landscape mode, with two speakers built into the stand, so they stay pointed at you. This will include an AMD Ryzen 7 4800H processor and an Nvidia RTX 2060 GPU, along with a wireless keyboard, mouse, and detachable 5MP webcam.

Lenovo also introduced the IdeaPad 5G, a 14-inch notebook based on the Qualcomm 8cx processor with 5G, which the company says is 10 times faster than 4G.

Acer focused on both professionals and gamers in its CES announcement. The company updated its Aspire 7 line to include the Ryzen 5000 series and an Nvidia GeForce GTX 1650 GPU, aimed at professionals and enthusiasts (including content creators). This is a 15.6-inch notebook that weighs 4.73 pounds. The somewhat lower-end Aspire 5 is also a 15.6 inch notebook with Ryzen 5000 series CPUs, but with Radeon RX 640 graphics. Acer also added AMD processors to its Spin 514 Chromebook 2-in-1.

Acer had a number of new gaming machines. The high-end Predator Triton 300 SE is now available with Intel 11th Gen Core H35-series (“Tiger Lake”) processors, and Nvidia GeForce RTX 30-series graphics. This has a metal chassis, and is 0.70 inches thin and weighs 3.75 lbs.

The Nitro 5 line offers either Intel Core or AMD Ryzen processors, and Nvidia GTX or RTX graphics including the new RTX 30 series. This is the low-end gaming line for Acer, which includes both 15.6 and 17.3-inch displays, but can be upgraded with such features as a Ryzen 9 5900 HX processor, Nvidia RTX GeForce RTX 3080 GPU, and a QHD display with a 165 Hz refresh rate, or a FHD display with a 360 Hz refresh rate.

Asus had perhaps the most interesting designs in gaming machines. The ROG (Republic of Gamers) Flow X13, is one of the more unusual designs: the base design is a 13-inch 2-in-1 convertible that pairs with the ROG XG mobile, an external GPU that adds extra gaming power. The Flow 13 itself runs the new AMD gaming processors up to the Ryzen 5980HS and the Nvidia GeForce GTX 1650 GPU. There aren’t a lot of convertibles with discrete graphics, and while the GTX 1650 is now more of an entry-level discrete entry, it’s still a big step up, especially in a machine that starts at just 2.9 pounds. This is available with a 120Hz FHD (1080p) display, or a 4K display. But it can be paired with the XG mobile, which runs a Nvidia GeForce RTX 3080 GPU, in a very small enclosure. In other words, it lets you have a very portable machine for when you’re on the road, but plenty of graphics power when you’re home and plugged in. I’ve seen other external GPU offerings, but none this small.

The Zephyrus Duo 15SE is an update of last year’s unique dual-screen laptop design, which has a smaller screen on the base behind the keyboard in addition to the main display. This year’s model adds Ryzen 5000 mobile processors up to the Ryzen 9 5900HX, up to 32GB of memory, GeForce RTX 30-Series graphics up to the RTX 3080, and an unusual 120Hz 4K option for the primary display. Asus also showed off additions to its TUF Dash line of entry-level gaming laptops. 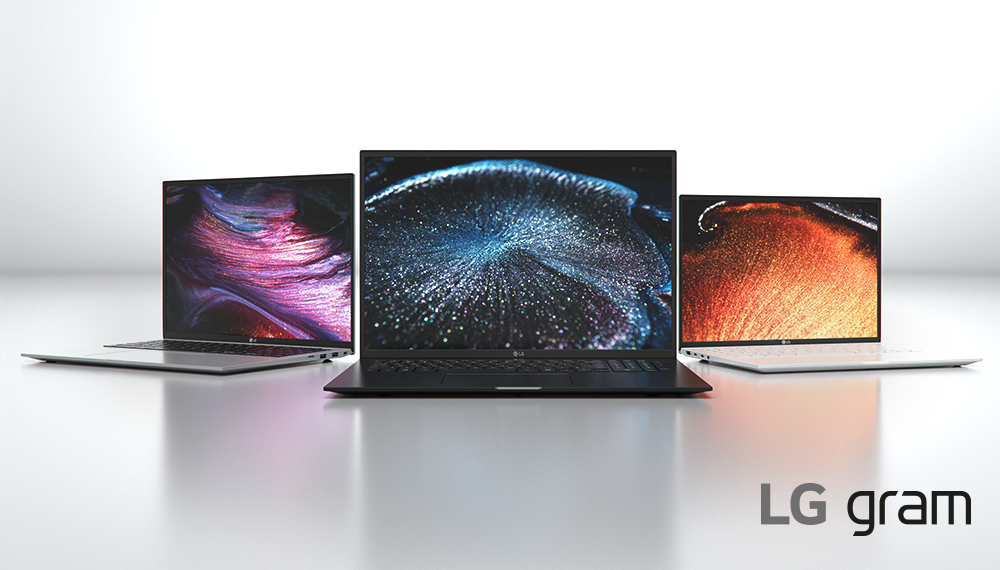 LG’s Gram series, and these too have been refreshed with the new Intel Core (“Tiger Lake”) processors. They also get the 16:10 display we’ve seen from others. LG announced five new models: regular 14-, 16-, and 17-inch notebooks, along with 14- and 16-inch 2-in-1s, with the regular 14-inch model starting at 2.2 pounds. One other change this year across all the models is a redesigned keyboard and larger touchpad.

Finally, Microsoft showed the Surface Pro 7 (see at the top) which of course adds the Tiger Lake processors (although not the vPro variant). More interestingly, it has been redesigned so that the boot drive is removable, meaning that you can take out the SSD and store it separately if you’re really concerned about security; or move it to another machine quickly, which might help in IT maintenance. It’s an interesting idea. This will be sold mainly through large-scale purchase agreements