In these trying times, we turn to familiar faces. And which ones are more familiar (besides friends and family) than the celebrity faces that we see on our screens every day? Now, imagine if these stars, people beloved by the masses, had a message just for you. With Cameo, you can commission custom celebrity video messages at fees ranging from shockingly reasonable to utterly absurd. With so many choices to consider, from which celebrity to pick to how much you’re willing to pay, some videos will be better than others. Overall, though, Cameo wonderfully works as advertised. It’s an Editors’ Choice award-winning app, and is perfect for purchasing truly special one-of-a-kind gifts.

You can browse Cameo’s celebrity catalog without an account, but after creating one, you can purchase videos via the company’s website. However, Cameo recommends using its Android or iOS app. There, you’ll find more features, more ways to communicate with celebrities, and easier access to videos. Many of these perks, such as direct messaging and video downloads, are missing or tougher to find in the web version. I primarily tested Cameo using an iPhone SE.

Cameo has thousands of celebrities to choose from, from actors to athletes to musicians to internet reality shows contestants. The service can feel overwhelming at first, but it provides excellent browsing tools for honing your search. Featured stars, such as Paula Abdul, Floyd Mayweather, and Ice T, get top billing on the main page, but you can also manually key in names. Under the “Comedians” tab, you can select “Saturday Night” to find Chris Kattan and Jon Lovitz. You can filter for actors from your favorite video streaming service. There are dozens of categories, too, including ones for Disney stars, En Español, pro wrestlers, and Game of Thrones.

As Cameo’s popularity grows, it also attracts higher-tier talent beyond Comic-Con B-listers, even if just for a limited time to support a charity. Jason Alexander and Snoop Dogg had brief stints on the service. Bella Thorne was once on Cameo, and on her page, you can sign up to get notified whenever she returns, presumably after she’s done gentrifying OnlyFans.

With so many stars to pick from, there is some inherent inconsistency. Some respond faster than others. Some charge more than others, with prices ranging from under $50 (Greg Sestero from The Room, some guy dressed like Santa Claus and other celebrity impersonators) to over $500 (Chaka Khan, Marlon Wayans) for a 30-second video. Prices may also rise without warning. User ratings and reviews help inform your decision. Pages also display past videos that a particular celebrity has done to show you an example of how your message may turn out.

Once you decide who you want to hire, it’s time to request your message. Select whether or not the video is for you or for someone else. Mark that the video is for a special occasion, such as a graduation or anniversary. Finally, write a 250-character description of what the person should say. You want to get pretty specific, mentioning anything that might trip up the celeb, such as pronouns or pronunciation. Remember, this celebrity is a stranger who doesn’t know you. They can’t just fully improv without guidance or the video will be bad. You can also attach a short video for more explanation. Some celebs even let you send more details for free over chat.

The videos are more entertaining when you leave room for creativity. When I commissioned a Cameo video as an engagement surprise, I gave the great Luis Guzman a fairly tight script. But for the video’s end, I asked him to just riff a little about his Community role, and having both scripted and non-scripted bits elevated the product. My fiancée and I both loved it. The seamless experience felt like working with a respected professional, not exploiting some washed-up hack.

Your video can be a heartfelt gift for a loved one or a total joke to troll and roast your friends. Remember Dubsmash, the app where you would lip sync movie clips? Well, Cameo just cuts out the middleman and makes the meme directly with the actors. Having this power, this tangible access to celebrities, is almost intoxicating.

Once you submit a request, the process is somewhat out of your hands as the celebrity can choose to accept or not. If they accept, they have seven days to complete the video or you get a refund. Cameo puts a hold on your card for the full amount after you purchase, but you don’t get charged until you get the video as promised. You can also pay in interest-free installments. Videos arrive as MOV or MP4 files, with the quality determined by whatever camera (typically a vertical phone) they were filmed with. Cameo sends your videos via email, text, and through the mobile app, but I couldn’t find a way to access them on the web.

If you think you’re famous enough to sell Cameo videos, not just buy them, you can submit an application through the website. Cameo takes a 25 percent cut of each transaction. That’s higher than crowdfunding apps, such as Kickstarter and Patreon, that take between 5 and 12 percent, respectively. Still, Cameo lets celebs theoretically make more than a thousand dollars banging out a couple videos in an afternoon, so the math still probably works out in their favor. 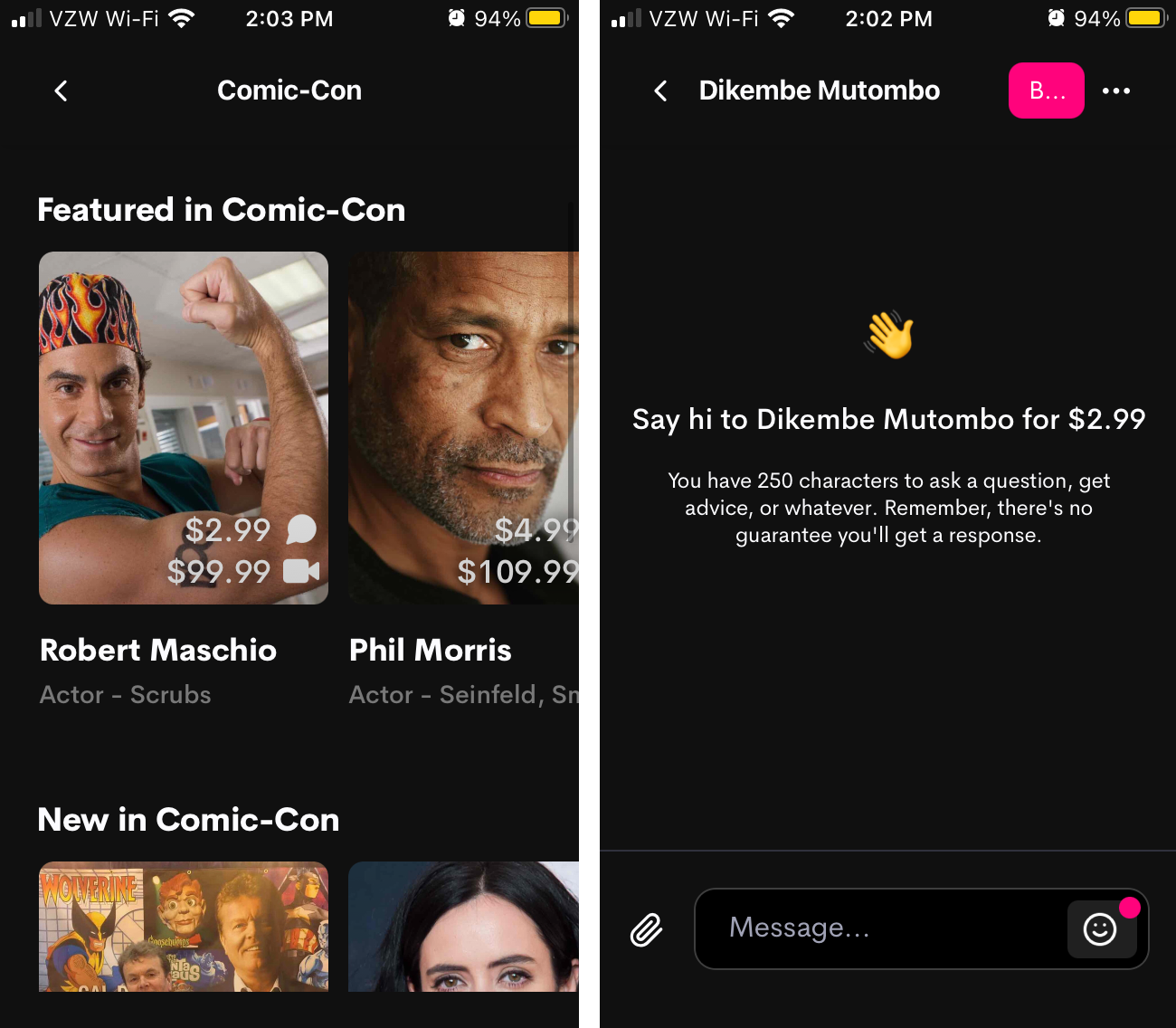 Zoom call, so you can have a seat and talk with Chris Hansen instead of receiving a one-way message. Joining a celebrity’s free Cameo fan club gives your requests high priority, lets you see more videos from that person, and notifies you about pricing changes.

Businesses can also request Cameo videos for promotional purposes. Think of it like hiring a celebrity spokesperson. Lindsay Lohan is ready to hype up your brand. These videos are more expensive, aren’t available from everyone in Cameo’s roster, and are subject to different licensing agreements when it comes to how and where they can be shared. Personal users, however, can freely share their videos all over social media. I just prefer to keep something this special to myself.

If I were as rich as some of the celebs on Cameo, I would spend an embarrassing amount of money commissioning videos. They’re fun and enormously compelling, despite unavoidable variables to consider when it comes to prices and which celebrities you can hire at any given moment. Still, using your phone to easily ask a famous person for a personal video message feels like one of the most magical uses of the internet we can hope for in this cursed modern era. Any service that lets Gina Torres, Billy Dee Williams, and the “Chocolate Rain” guy wish me a happy birthday earns an Editors’ Choice award