If an antivirus utility cleans up existing malware infestations on installation and then prevents future attacks, it’s doing the job. Most software in this field also try to keep you safe by helping you steer clear of malicious or fraudulent websites. BullGuard Antivirus sticks to those basics, for the most part, though it does add a scan for vulnerable security settings. It had some troubles at the time of our previous review, including a total miss on one nasty ransomware attacker. Things are looking a bit better this time around, though it tanked our phishing protection test.

How Much Does Bullguard Antivirus Cost?

At $29.99, a yearly BullGuard subscription costs less than many competing products. Bitdefender Antivirus Plus, Kaspersky, and Webroot all cost 10 dollars more. However, Bitdefender and Kaspersky give you three licenses for $59.99, and Webroot charges just $49.99 for a three-pack. At the antivirus level, BullGuard doesn’t offer any similar volume discount. McAfee also costs $59.99 per year, but a McAfee subscription lets you install protection on every device you own, so it’s not truly comparable.

A modern, attractive installer displays information about the program while it’s doing its job. Once it finishes, you create or log in to your online BullGuard account. I like the fact that it automatically downloads the latest antivirus definitions, rather than setting that as a task for the user. 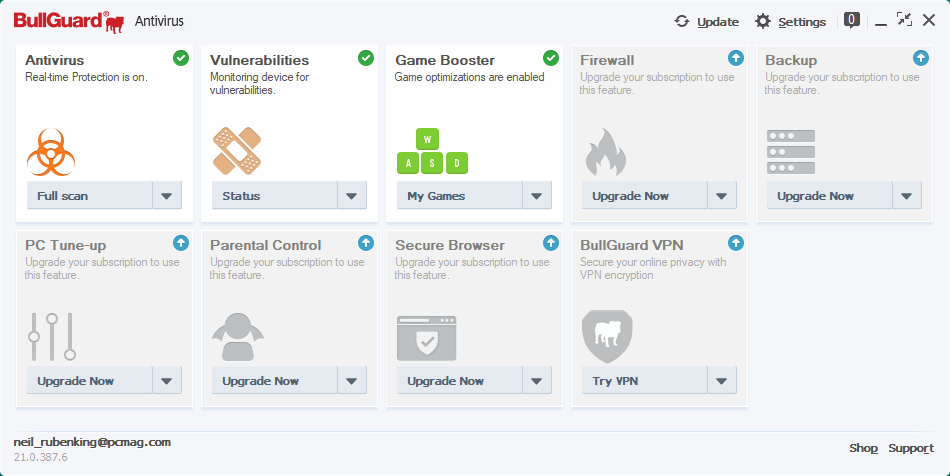 Avira Antivirus Pro, for example, took 105 minutes for the first scan but just five for the second.

One more thing about that main window. On installation the main window is wide enough to display four panels across, with a slider that brings the last item into view. You can click to expand the window to show all nine panels or shrink it to show just three and a half panels. Yes, the latter is an odd view. And there’s no clear way to get back to the original four-panel width.

We look to four independent antivirus testing labs around the world for evidence that the antivirus under testing is (or isn’t) effective. BullGuard appears in the latest results from just one of these, though the scores it does have are good.

Accurate detection of malware is important, but an antivirus also must avoid quarantining valid programs, and must not put a drag on system performance. Experts at AV-Test Institute assign antivirus programs up to six points each for protection, performance, and usability—where usability means that it doesn’t flag valid programs or websites as malicious. BullGuard earned the full six points in all three categories, for a perfect 18-point total. Eight other products reached that perfect score in the latest test, among them Kaspersky, McAfee, Norton, and Microsoft Windows Defender Security Center.

Researchers at AV-Comparatives regularly report on a wide variety of security product tests. We closely follow three of these. A product that does well enough to pass a test receives Standard certification, while those that go beyond the necessary minimum can reach Advanced or Advanced certification. In past years, BullGuard has taken a range of scores in these tests. Sometimes it reached Advanced , others it didn’t even achieve Standard certification. The latest reports from this lab don’t include BullGuard. 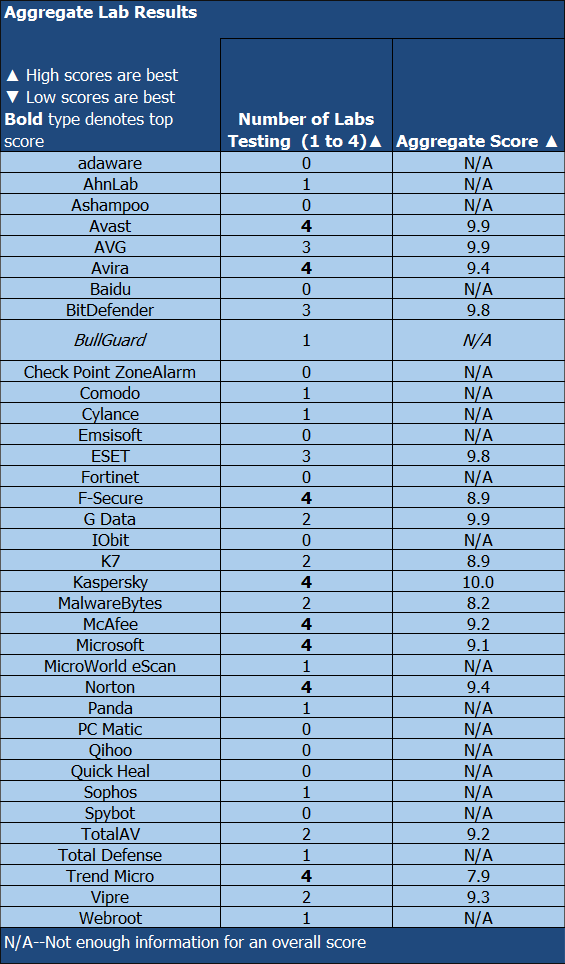 Multiple results aside, BullGuard’s perfect score from AV-Test is a very good sign. We look forward to more lab tests.

The big testing labs have resources far beyond our own, but we do like to get a hands-on experience of each product’s malware protection abilities. We use a collection of several dozen real-world malware samples that have gone through our analysis. This analysis lets us confirm how thoroughly the antivirus blocked the installation.

When we opened the folder full of samples, BullGuard’s on-access scanner quickly started knocking them off, displaying a small pop-up alert when it detected something amiss. If additional alerts occurred, they all shared the same pop-up, with a note indicating how many more were pending. You can click through to view and close the alerts one at a time or check a box to close them all at once. BullGuard detected nearly 80% of the samples at this point.

ransomware sample. Launching the sample mods isn’t usually part of this test, but because it was ransomware we made an exception. The ransomware ran to completion, encrypted the test system’s documents, and demanded its ransom, all without a peep from BullGuard. In the current round of testing, it immediately wiped out both our dozen ransomware samples and their modified versions, which is a big improvement.

To complete the test, we launched each of the regular samples that survived BullGuard’s initial onslaught. It caught quite a few of them at or soon after launch. One way or another, it detected 93% of the samples and scored 9.3 points, the same as TotalAV Antivirus Pro and Kaspersky. That’s a significant improvement since its last test, in which it earned just 8.2 points.

BullGuard’s score is respectable, but six products have earned even more points in their own tests. Topping this list is Webroot SecureAnywhere AntiVirus, which managed a perfect defense and earned the maximum score, 10 points. 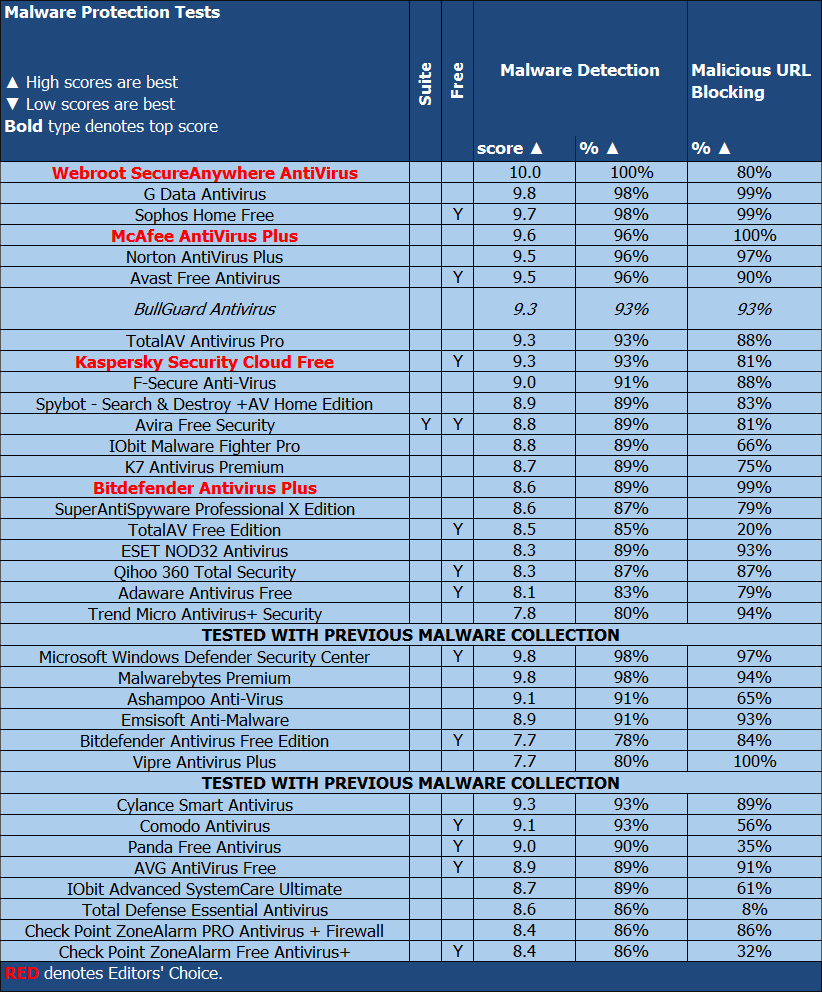 MRG-Effitas. Typically, these are no more than a day or two old. We launch each URL and note how the antivirus reacts. Does it steer the browser away from the dangerous website? Does it identify and eliminate the malware download? Or does it sit idly, twiddling its thumbs while malware downloads pile up? We keep testing until we reach 100 data points, and then analyze the results.

BullGuard’s Safe Browsing component blocked all access to 82% of the URLs, diverting the browser to a warning page. The real-time antivirus iced another 11% during download. BullGuard’s total detection rate of 93% is decidedly better than the current average, 79%. However, 11 other products have scored even higher. McAfee and Vipre are the big winners here, each with 100% protection.

This year’s BullGuard product line promises multi-layered protection against malware. The six layers are: Safe Browsing, to keep you away from dangerous pages; Dynamic Machine Learning, to detect malicious behaviors; Sentry Protection for Zero-Day Malware; an On-Access Antivirus Engine; a Firewall (in the suite-level products); and a Vulnerability Scanner.

I don’t have access to zero-day malware—anything I’ve collected is necessarily past the possibility of a zero-day attack. But I did get to see the multi-layered protection in action. When I test protection against malware-hosting URLs, I use a small, hand-coded program that launches each URL in turn and lets me record how the antivirus handled it. Shortly after I started that test, BullGuard decided that this tool’s behavior, repeatedly launching dangerous URLs in the browser, was suspicious enough to merit quarantine. 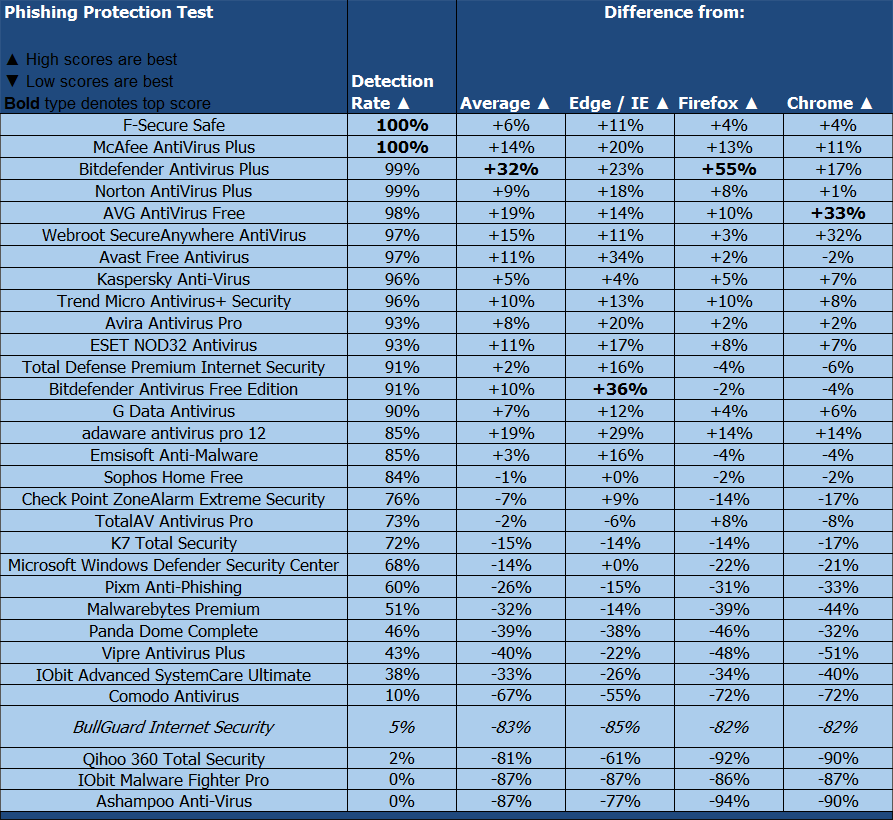 How to Avoid Phishing Scams.

Safe Browsing is the BullGuard feature that steers your browser away from dangerous and fraudulent websites. It also marks up links in Google, Bing, Yahoo, and Facebook, so you don’t even click dangerous ones.

A check mark in a green circle means the site is safe, while a red stop sign denotes a site you shouldn’t visit. Pointing to the icon displays a small pop-up listing the website’s categories and threat level. However, you can’t click for a full-page site analysis the way you can with Norton’s Safe Web feature.

Hackers just love finding security vulnerabilities in your favorite programs, things that let them execute arbitrary code on your computer. The best defense against this kind of attack is to apply all security patches as soon as they become available. Many security tools, among them McAfee AntiVirus Plus and Bitdefender, include a module to check for unpatched security vulnerabilities.

You Can Do Better

BullGuard Antivirus sticks to the task of protecting your system against malware. One independent testing lab certifies its protection, giving it a perfect score. In our hands-on malware protection tests it scored better than when last tested. However, its phishing protection score, which fluctuates quite a bit, hit a new low in our latest tests.

You’ll pay a little more for our Editors’ Choice antivirus products, but the extra cost is worth it. Bitdefender Antivirus Plus and Kaspersky Anti-Virus get top scores from multiple labs, not just one. McAfee AntiVirus Plus protects all your devices, on multiple platforms. And the unusual behavioral-analysis detection system used by Webroot SecureAnywhere AntiVirus makes it the lightest and tiniest antivirus of all. With all these to choose from, there’s little reason to opt for BullGuard.