You certainly can find a lot of label printers in the world, and few manufacturers offer more of them than Brother. The company’s latest, the $299.99 P-touch Cube XP, is the flagship model in the P-touch Cube series. It’s optimized for business applications and developer integration from mobile devices and desktops, with available software development kits (SDKs) for users who want to customize and create their own templates and label applications. The Cube XP works with most Windows, macOS, Android, and iOS devices, and it’s compatible with a huge array of Brother cartridges in widths ranging from about a quarter-inch to one-and-a-half inches. Versus its Editors’ Choice-winning sibling, the P-touch Cube Plus, the Cube XP can print labels up to 33 percent wider, with twice the resolution and more than three times as many lines per label. But its price is a bit high for what you get.

Measuring 5.4 by 3.7 by 5.4 inches (HWD) and weighing 2.3 pounds, the Cube XP is significantly bigger than (and weighs almost three times as much as) the original P-touch Cube and the P-touch Cube Plus. Much of its girth is attributable to a large 1,750mAh lithium-ion battery that you can recharge, as well as replace. As a professional-grade machine, however, the XP competes less with the other Cubes than with Brother’s QL-800 and QL-1100 series models. The former include the QL-800 (a 2017 Editors’ Choice award winner), the QL-810W, and QL-820NWB (another winner).

These models are all a few inches longer than the Cube XP and weigh about the same. In contrast, in the QL-1000 series, the QL-1100 and QL-1110NWB are bigger in all directions and almost twice as heavy.

Two other close competitors to the Cube XP are the Arkscan 2054A-LAN and the Epson LabelWorks LW-PX750PCD. They, too, are significantly larger and heavier than the Cube XP. If you need to print labels without being tethered to a power source, the prices of the Cube XP and the Arkscan include a battery. Batteries for the QL-810W and QL-820NWB cost extra; the QL-800, QL-1100, and Epson models have no battery options at all.

The Cube XP’s maximum label width of 1.5 inches, though tops among the P-touch Cube trio, is on the narrow side—almost a full inch narrower than the 2.4-inch-wide media supported by the QL-800 series, let alone the 4-inch and 4.25-inch media of the QL-1100 series and Arkscan, respectively. Only the Epson LabelWorks printer’s 0.94-inch label cartridges are smaller.

Like the other P-touch Cube models, the Cube XP has no onboard controls. Instead, depending on the platform of your computing device, Brother provides several apps for designing and printing labels. We’ll look at the bundled programs in a moment. Meanwhile, on the back of the Cube XP, you’ll find a power button and a micro USB port for charging and exchanging data. 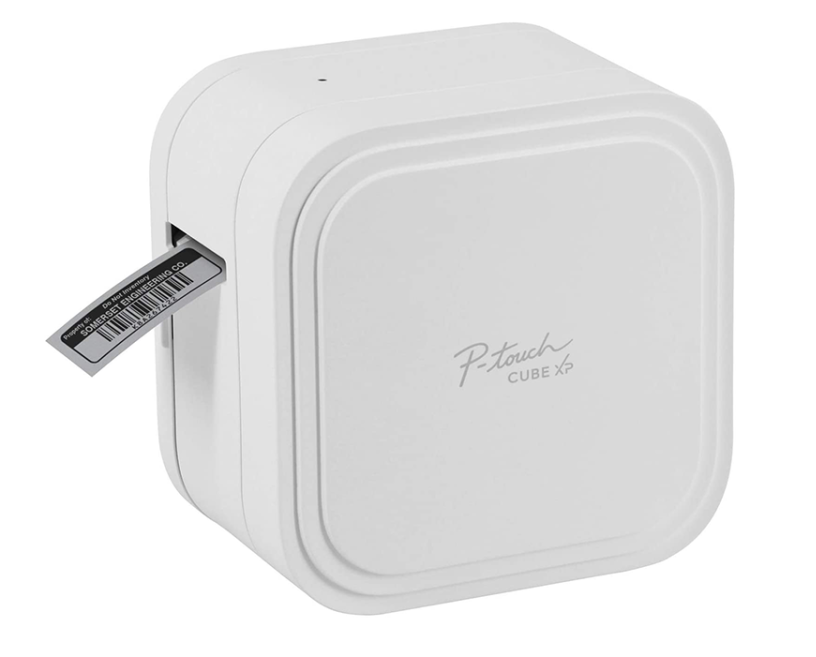