Book Excerpt: “Love Is All Around: And Other Lessons We’ve Learned from The Mary Tyler Moore Show”

The following is adapted from Paula Bernstein’s “Love Is All Around: And Other Lessons We’ve Learned from The Mary Tyler Moore Show.” Reprinted by permission of Running Press, part of the Perseus division of Hachette Book Group. Copyright 2020 Paula Bernstein.

Just one month before “The Mary Tyler Moore Show” went on the air in September 1970, fifty thousand feminists paraded down New York City’s Fifth Avenue as part of the Women’s Strike for Equality March. Sponsored by the National Organization for Women (NOW), it was the brainchild of Betty Friedan, author of the 1963 bestseller “The Feminine Mystique.” The groundbreaking book challenged the notion that a woman’s role in society is to be a housewife and is credited with kickstarting the second-wave feminist movement, a.k.a. women’s liberation (or the catchier women’s lib). And into that very heightened moment, Mary Richards, a single working woman, arrived in prime time, providing a new role model for independent young women.

In the 1950s, women’s roles on TV sitcoms were generally limited to traditional housewives such as June Cleaver (“Leave it to Beaver”). In “The Honeymooners,” Ralph often threatened his wife with violence — “To the moon, Alice!” — and Lucy’s show biz ambitions on “I Love Lucy” often got her in trouble with her husband, Ricky Ricardo, who would bellow, “Lucy, you’ve got some ’splaining to do!” By the 1960s, women in prime-time series were either married or widowed. A new slew of shows were at least depicting women striving for independence. Granted, they were mostly monsters or witches. Samantha, the witchy housewife on “Bewitched,” had more power than her husband, Darrin, but his male ego was too threatened to allow her to use it. On “I Dream of Jeannie,” despite being the title character, Jeannie (Barbara Eden) is submissive to her master and uses her power mostly to please him (and even then, it backfires!). Symbolic or what?

“That Girl,” which premiered in 1966, four years before “The Mary Tyler Moore Show,” introduced audiences to the idea of a single woman living on her own in the big city. In that show, Marlo Thomas, daughter of comedian Danny Thomas (“Make Room for Daddy”), plays Ann Marie, an aspiring actress who moves to New York for her big show business break. She’s on her own but hardly alone. Her overprotective father is always hovering around, worried about his ditzy daughter, and she soon falls in love with magazine executive Donald Hollinger. By the fifth season, she is engaged to Donald (played by the actor Ted Bessell, who later appears on “The Mary Tyler Moore Show” as one of Mary’s steady boyfriends, Joe Warner).

While Mary Tyler Moore herself never identified as a feminist, the character of Mary Richards might have done more for the women’s lib movement than any other fictitious character. Mary was a spunky professional woman, more focused on work and friends than on marriage, and in that way, she broke the mold of what a woman should be. Who says you need a man and children to lead a happy life? The show was never vocally politically minded in the way that, say, “All in the Family,” which went on the air six months later, was. It took on feminist issues — such as birth control, sex discrimination, reproductive rights, and pay equity — but it never took them on with a shout. Mary let us know her mind in her own quiet way. Mary Richards “was a woman who stood up for herself whenever she spotted inequity but who wasn’t going to push it to the edge. She made little squeaks and noises and was among the first to do so,” Moore later said.

So Mary isn’t a radical, but her mere existence in the newsroom is pretty radical. Like real women joining fields that had previously only been open to men, Mary is often in the position of being the designated representative female. “It used to be I felt I could be myself. Now I feel I represent women everywhere,” Mary gripes to BFF Rhoda as she prepares for a meeting at the station. She resents how the new station manager is always “trotting in groups of people and saying, ‘This is our woman executive!’” Mary supports women’s causes but not in a strident way. She doesn’t declare she’s prochoice, but she makes it clear that she supports a woman’s right to make reproductive choices. Murray pressures his wife to have another child even though they have three girls. As Lou, the self-described male chauvinist pig, explains, “A man doesn’t feel complete until he has a son.”

Mary responds, “I don’t think it’s fair to ask Marie to have a baby if she doesn’t want one.” Okay, she’s not exactly walking in a prochoice march, but in her own way, Mary is supporting women’s rights.

You could applaud her for pushing for change, or you could just as easily criticize her for being a pushover. Gloria Steinem and some other feminist activists and critics complained she was too wishy-washy and not vocal enough. Mary twists herself into contortions not to hurt anyone’s feelings, and she’s not exactly a go-getter. At one point, Lou tells her, “We got this memo from personnel about how to treat women different and don’t give them those crummy little jobs like women are supposed to do.”

“You don’t agree with that memo, do you?” he asks.

“Well, I sort of suggested it.” It’s played for laughs, but it says a lot about Mary’s apologetic nature in the office. Though she never marries over the course of the show, some critics have pointed out that she is the “de facto wife and mother of her office family.”

As the series went on and feminist attitudes became more accepted, TV critics took the show’s writers to task for not giving Mary more important work to do in the newsroom. Feminists noticed that the theme song calls Mary a girl even though she’s clearly a woman. A New York Times critic complained that Mary “hardly ever gets to write the news or report it on camera — even though she appears to be several times brighter than the men who do.” Still, compared to the female characters on TV at the time, Mary was downright radical. Shows like “Bewitched” and “I Dream of Jeannie” involved scenarios where a woman has special powers, but the man in her life won’t let her use them!

Mary had made it out of the kitchen and into the office, but for some feminists, she didn’t go far enough. Groundbreaking feminist Shirley Chisholm, the first African American woman in Congress (1968), was a fan of the show . . . sort of. In 1977, when the show was about to go off the air, Chisholm told Esquire magazine, “One of the delightful aspects of the show is that it has featured a single woman making it in a male-dominated occupation. But why does Mary always call her boss ‘Mr. Grant,’ while her male colleagues refer to him as ‘Lou’?” 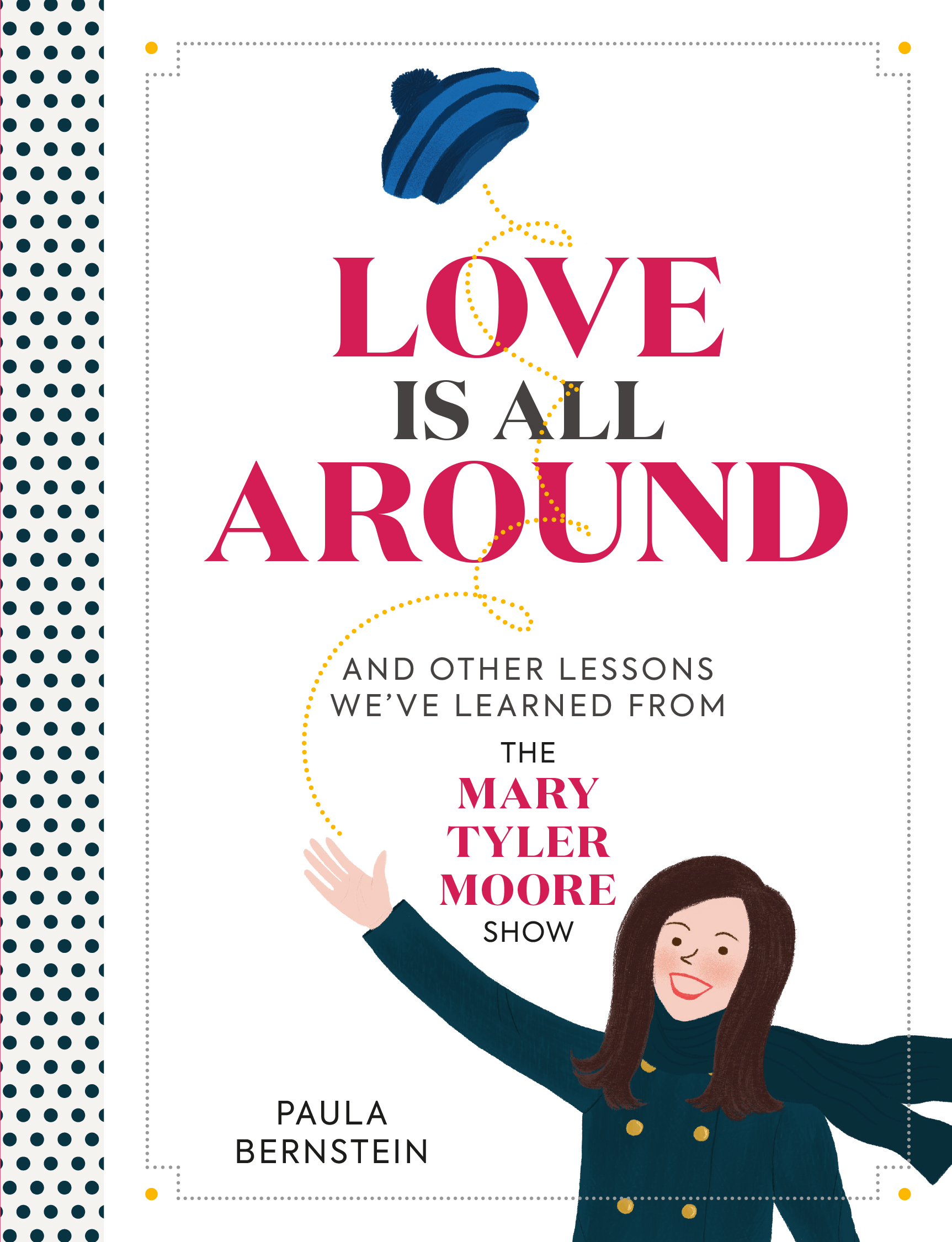 “Love Is All Around: And Other Lessons We’ve Learned from The Mary Tyler Moore Show” can be purchased here.

Paula Bernstein is a journalist, author, and filmmaker. She is currently working on her next book, “Be Like Betty White: Life Lessons from The First Lady of TV.” A former staff reporter at Variety and The Hollywood Reporter, Bernstein has written for a number of publications including Fortune.com, Filmmaker Magazine, No Film School, and IndieWire, where she was previously an editor. Bernstein directed the short documentary “Sole Doctor,” which is now available on Amazon Prime.