The latest AAA games require more graphics horsepower for an immersive experience than the typical ultraportable laptop can provide. Dedicated gamers will often buy a beefy gaming laptop that can run such titles to their satisfaction, or reserve gameplay for their desktop PCs at home. A third option is to connect an external GPU like the Asus ROG XG Mobile to an ultraportable laptop. The XG Mobile is one of the better external GPU (eGPU) concepts we’ve seen, but it’s still an imperfect and expensive solution, with the XG Mobile and bundled ROG Flow X13 laptop starting at $2,999 and offering decent but hardly noteworthy performance. Most gamers will be better off with sticking with a beefier gaming laptop.

Traditional eGPUs like the Razer Core X Chroma or Lenovo Legion BoostStation seek to offer a blend of portability and performance. They’re not portable themselves—often they’re large boxes about the size of a mini desktop PC that stay at home on your desk and connect to a laptop via a Thunderbolt port. But they allow you to use an ultraportable laptop when you’re on the road with no use for a beefy gaming rig, and connect to the eGPU when you get home and want to indulge in a bit of fragging with silkier frame rates than your laptop could manage on its own. By contrast, the XG Mobile is, as its name suggests, designed to be carried with the Flow X13 laptop when you’re out and about. It measures 1.2 by 15.5 by 20.8 inches (HWD) and weighs 2.2 pounds, dramatically smaller and lighter than the 7-inch-tall Core X Chroma. Instead of a Thunderbolt connection, it features a proprietary Asus locking plug that is currently compatible only with the ROG Flow X13. As a result, the laptop and XG Mobile are currently available exclusively as a bundle, though Asus does plan to sell them separately starting later this year. 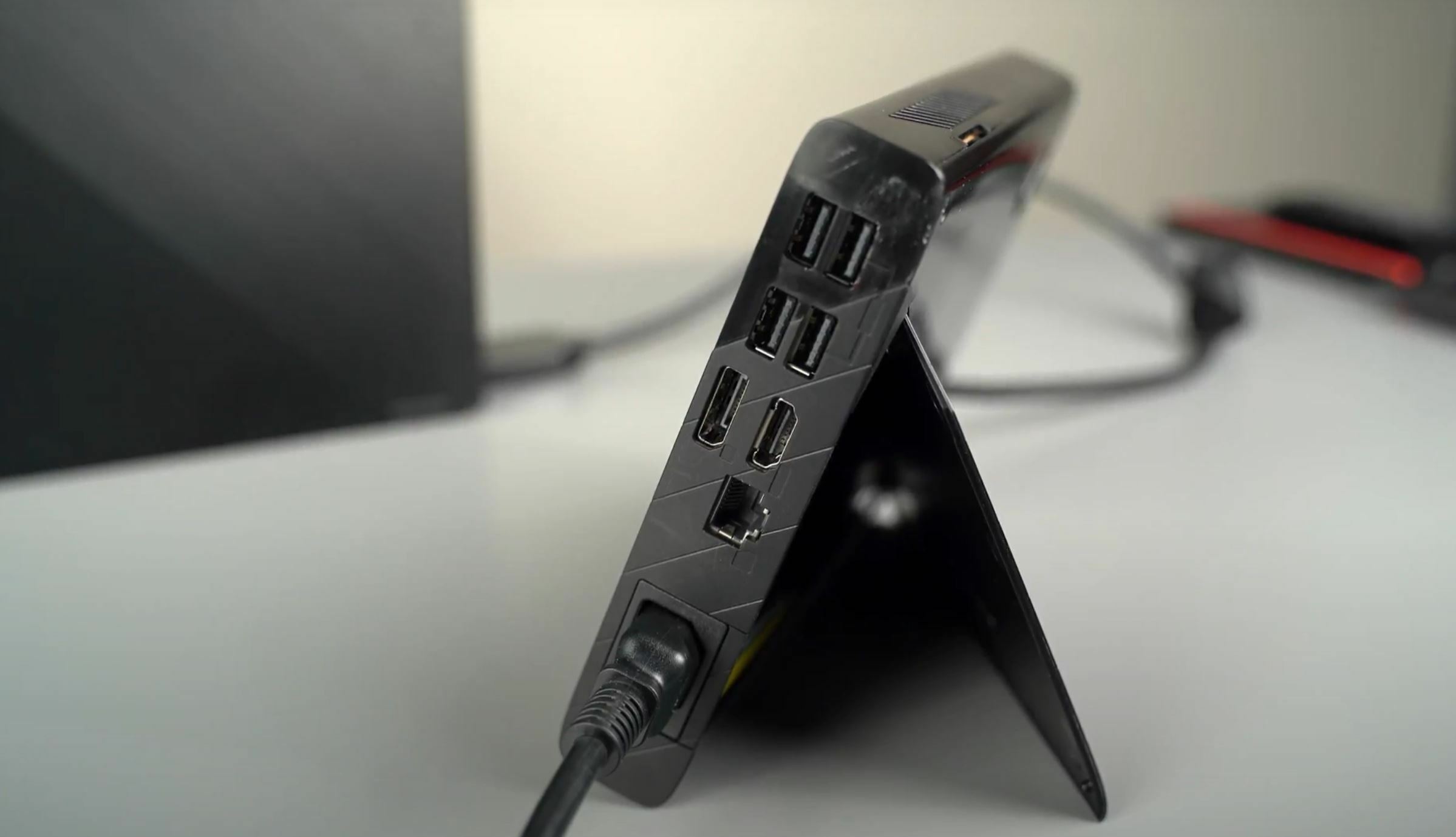 RTX 3080 Founders Edition desktop card. You can see the specs of all of the laptops in the charts below: 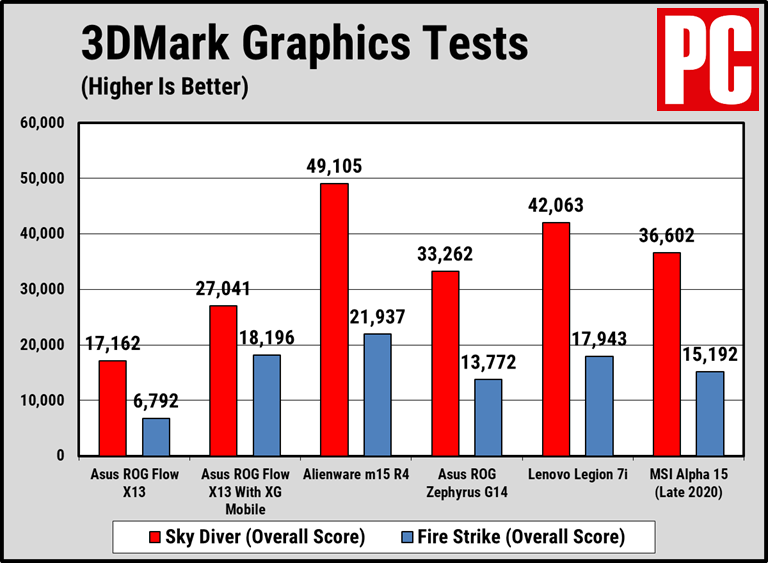 Next up is another synthetic graphics test, this time from Unigine Corp. Like 3DMark, the Superposition test renders and pans through a detailed 3D scene and measures how the system copes. In this case, it’s rendered in the company’s eponymous Unigine engine, offering a different 3D workload scenario than 3DMark, and a second opinion on the machine’s graphical prowess. 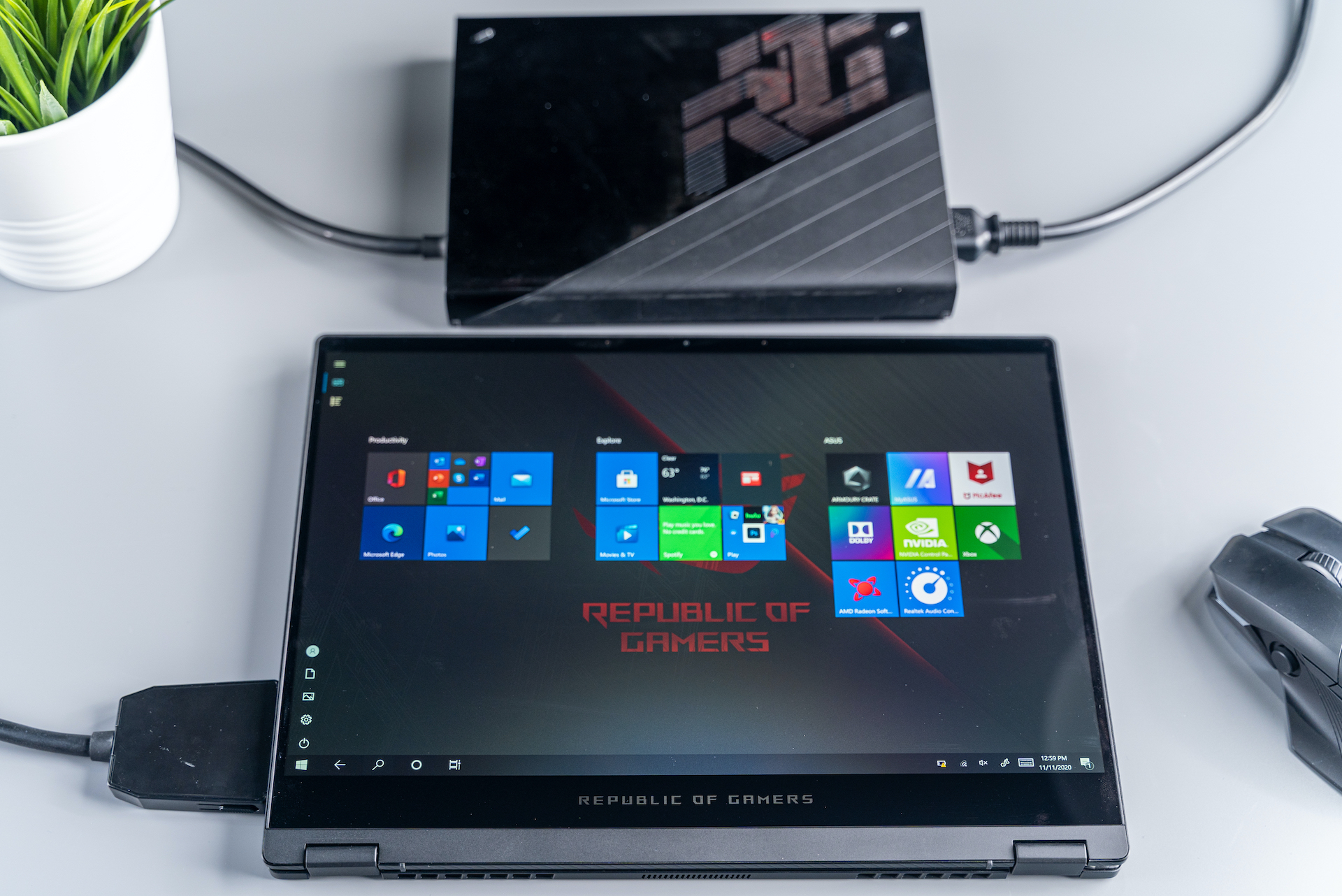