A well-executed flagship motherboard can be a joyous piece of enthusiast tech to behold, but by definition tends to be really expensive. Asrock’s new Z490 Phantom Gaming Velocita ($229.99) may not have all the latest high-end features (20Gbps USB ports! Onboard OLED display!) of a flagship model, but this board entices with its value proposition instead. Packing a capable set of features at a reasonable price, the ATX-form-factor Velocita has what it takes to become one of the more widely used Z490 motherboards for the new generation of Intel “Comet Lake-S” CPUs. 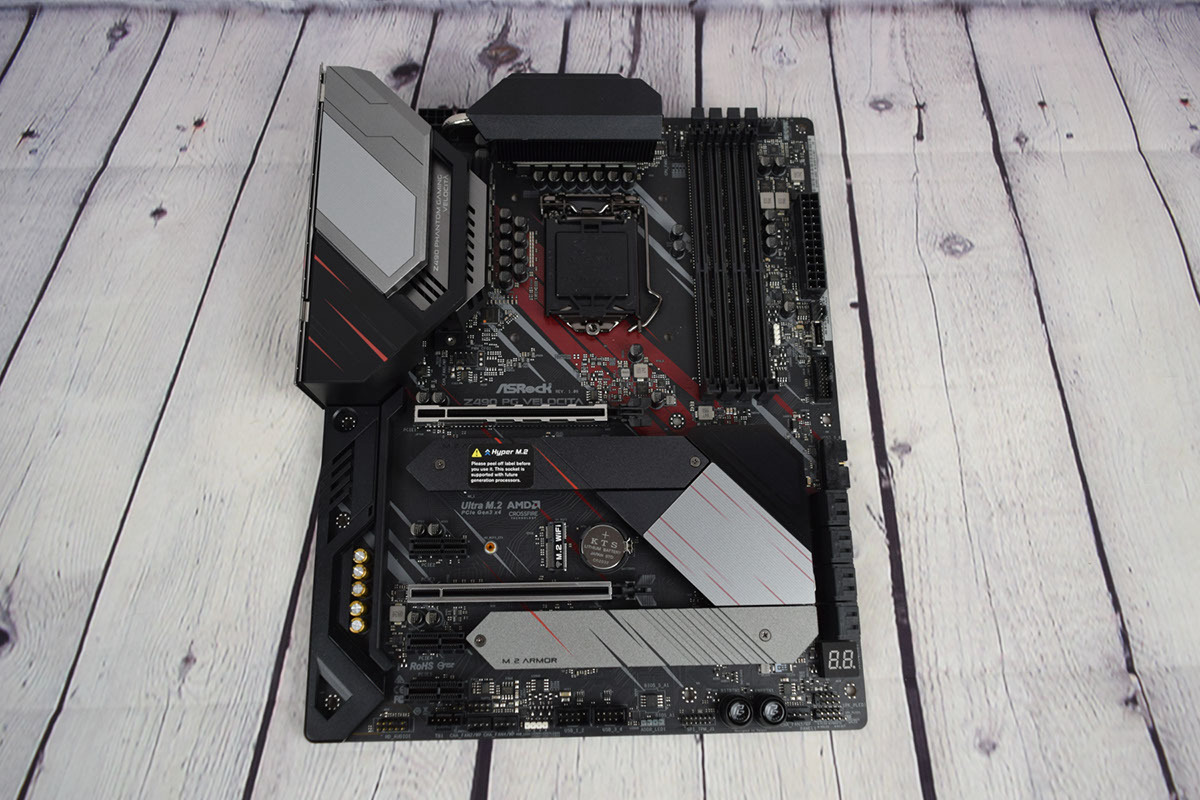 Asrock designed the Z490 PG Velocita with a fairly ordinary appearance, with black and silver featuring heavily in the PCB’s makeup. Streaks of red spice up the color scheme a bit, but the unpowered board really doesn’t stand out in terms of looks. This changes somewhat when power is supplied to the board, and “Asrock” and “PG” logos on the heatsink and rear I/O shroud illuminate. This makes the board recognizable at a glance, even if this kind of lighting feature is common nowadays at this price level. 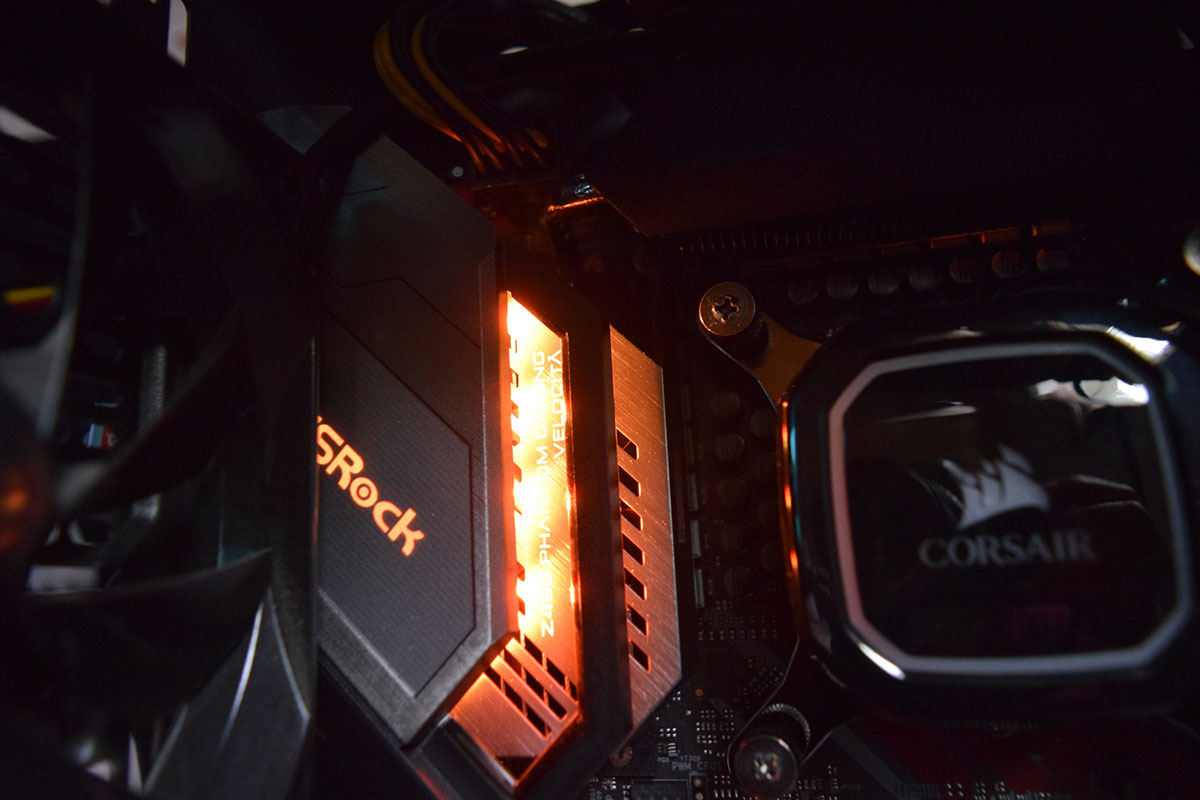 Z490 Taichi. It also has fewer power phases, and it lacks three-way CrossFireX support (without a riser), among other things. Depending on what you plan to do with your system, however, these features may not be a serious loss. Single-card system builders and non-overclockers won’t mind. 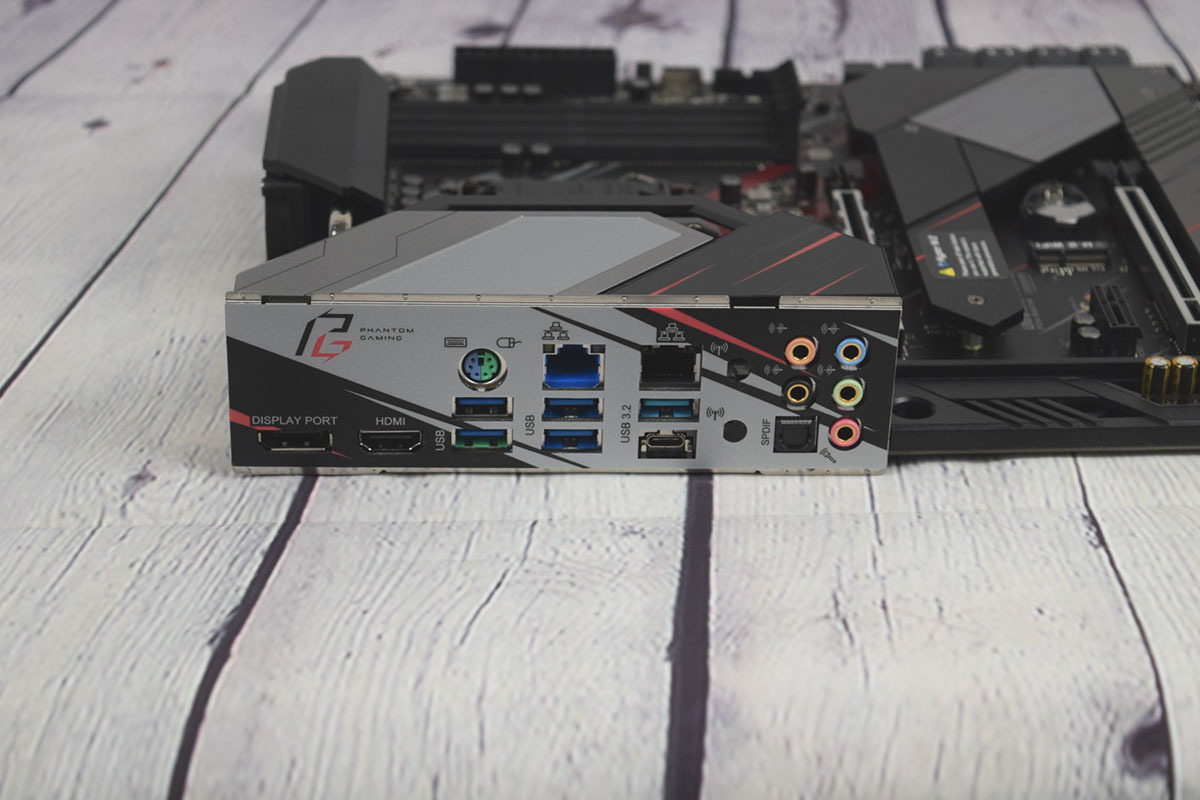 Getting this board built into a case is fairly straightforward and without any major problems. Plugging in the CPU’s power connector could be a bit difficult depending on the case design, as it’s wedged between the rear I/O shroud and VRM heatsinks, but it’s not terrible and nowhere near as awkward as the ordeal I suffered with Asrock’s Taichi X299 CLX. You get two eight-pin CPU connectors for extra power delivery if desired. 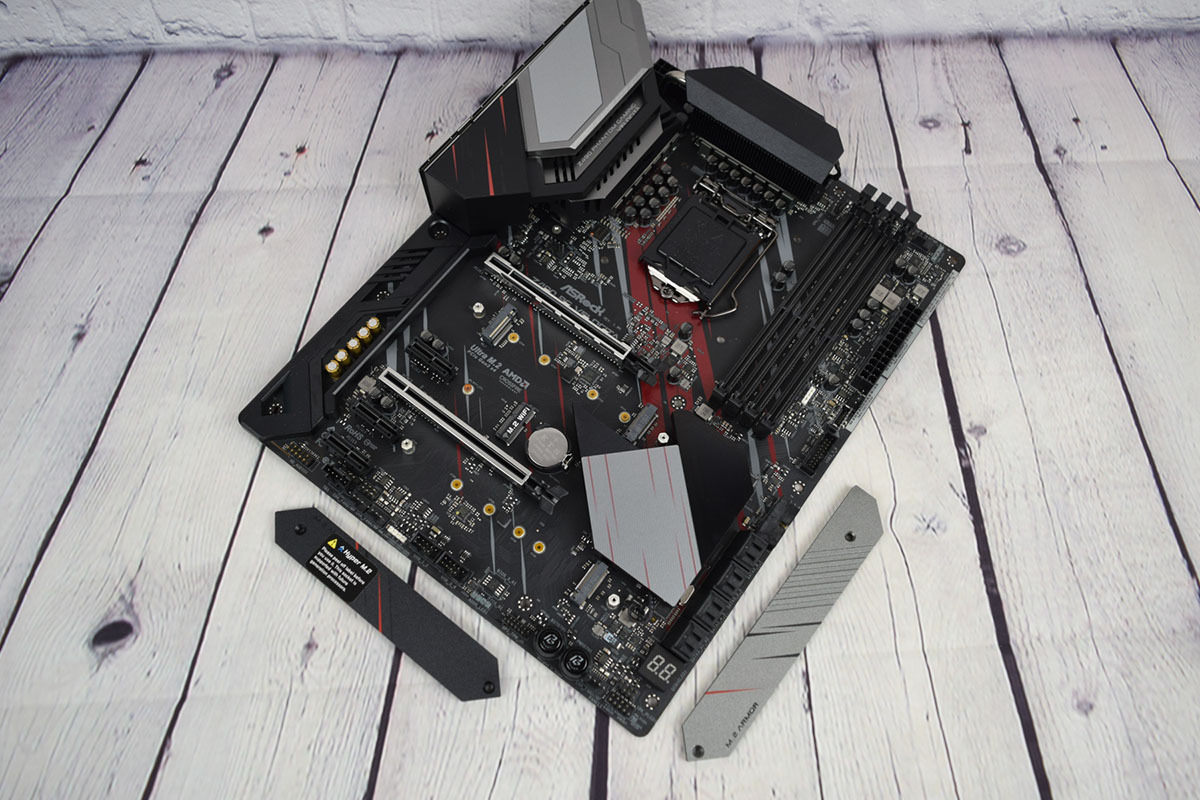 A Brief Look at the BIOS

Asrock utilizes a black and red color scheme for its Phantom Gaming BIOS that’s dark and edgy. Upon first loading the BIOS, you’re greeted by an EZ mode that has almost all the basic settings you could want to access… 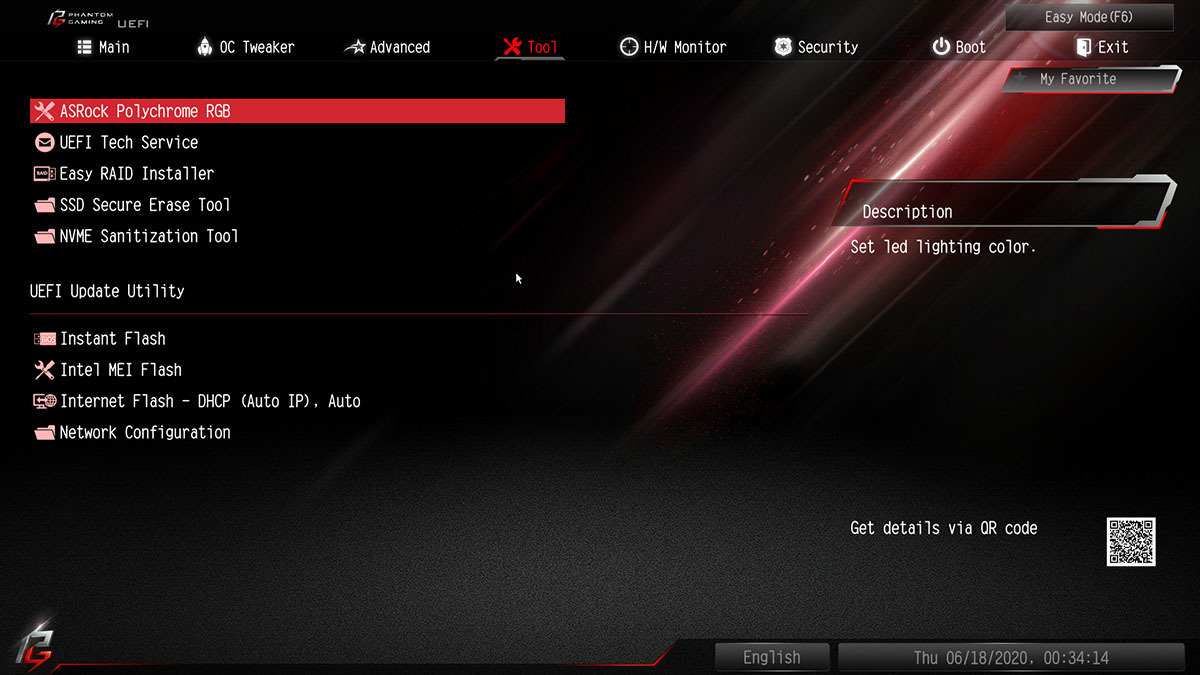 A Test Run at Overclocking

I built this board up with one of Intel’s new Core i9-10900K processors and a dual-channel Corsair RAM kit that can operate at 4,200MHz. As this hardware is already quite robust and operates at relatively high clock speeds, there wasn’t much headroom for overclocking, but I opted to use it for a reason—to test the motherboard’s ability to operate with fast DDR4 memory.

Officially, the board supports RAM clocked at up to 4,666MHz, but most people are likely to use memory clocked significantly slower. For its part, the CPU officially supports RAM clocked at a more limited 2,933MHz, and realistically most DDR4 on the market today operates below 4,000MHz. Though there are faster RAM kits available on the market, by using a 4,200MHz kit, I’m able to testify that the board works perfectly with RAM up to at least this speed. I didn’t opt to overclock the RAM further, though. 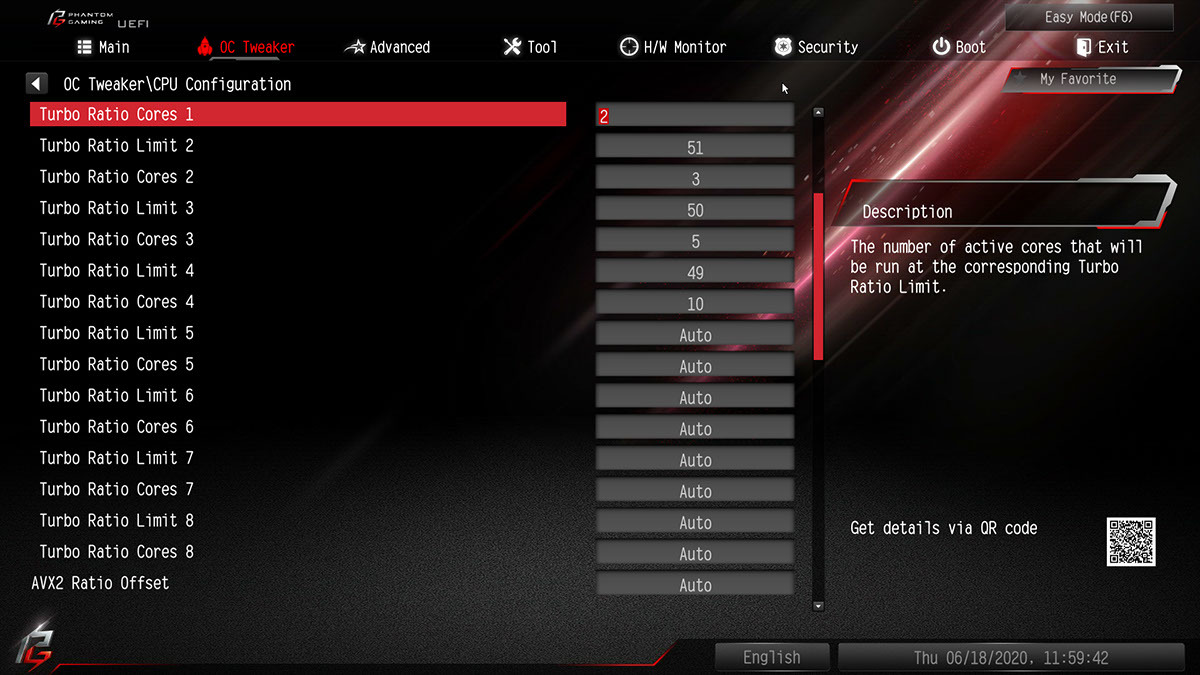 With everything set up and the system up and running, getting the drivers installed on Windows 10 worked flawlessly. Typically, I end up needing to update Windows before I’m able to get all of the drivers to work, but in this case everything installed without issue, and without me ever having to connect to the internet.

Asrock’s included software utilities also installed easily, though they’re not all particularly useful. There’s a Norton Security trial included with the board worth skipping unless you are considering signing up for that service, but otherwise I’d say everything else is at least worth taking a look at.

The three most useful programs, to my eyes, comprise Asrock’s Tuning, App Shop, and Polychrome Sync applications. The first of these displays information about your system and gives you limited control over the CPU’s clock speed and voltage. You get better controls in the BIOS, but this could still prove useful for testing purposes when overclocking.

The App Shop program is essentially just an app store, but it also includes a driver-update service that can help keep your system up to date. If it weren’t for this feature, I’d recommend avoiding the app shop altogether, as it has no other real purpose.

Last but not least is Asrock’s Polychrome Sync software, which is essential if you want to control the various RGB LEDs connected to the motherboard… 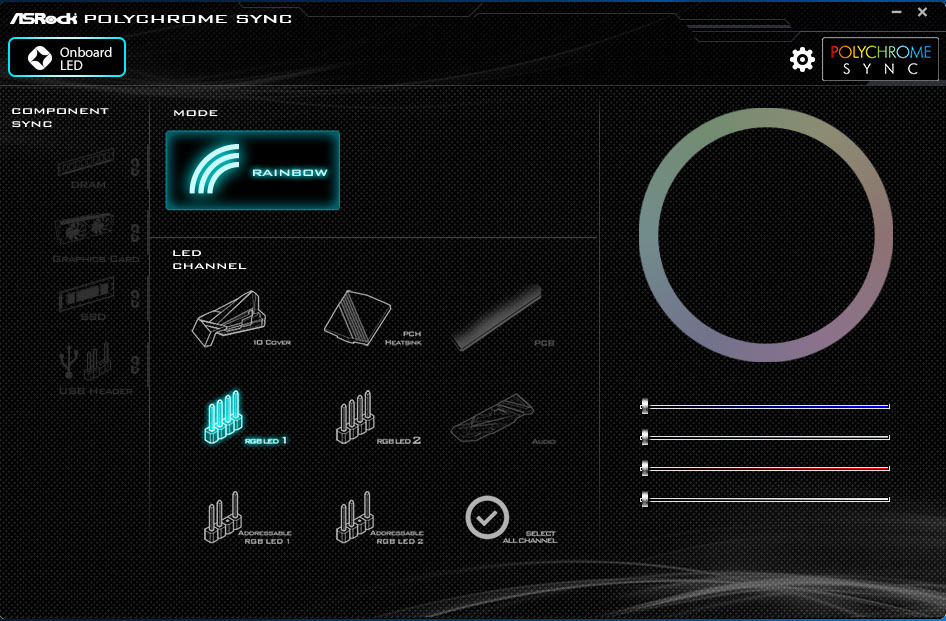 An Ideal Balance of Value and Power for Z490

All things considered, I expect Asrock’s Z490 Phantom Gaming Velocita to be one of the more popular motherboards in the Z490 market. Aside from the relatively few USB ports and lack of onboard Wi-Fi, I can’t find any real complaints to make about this board. It offers a reasonable, well-rounded set of features and is very fairly priced. 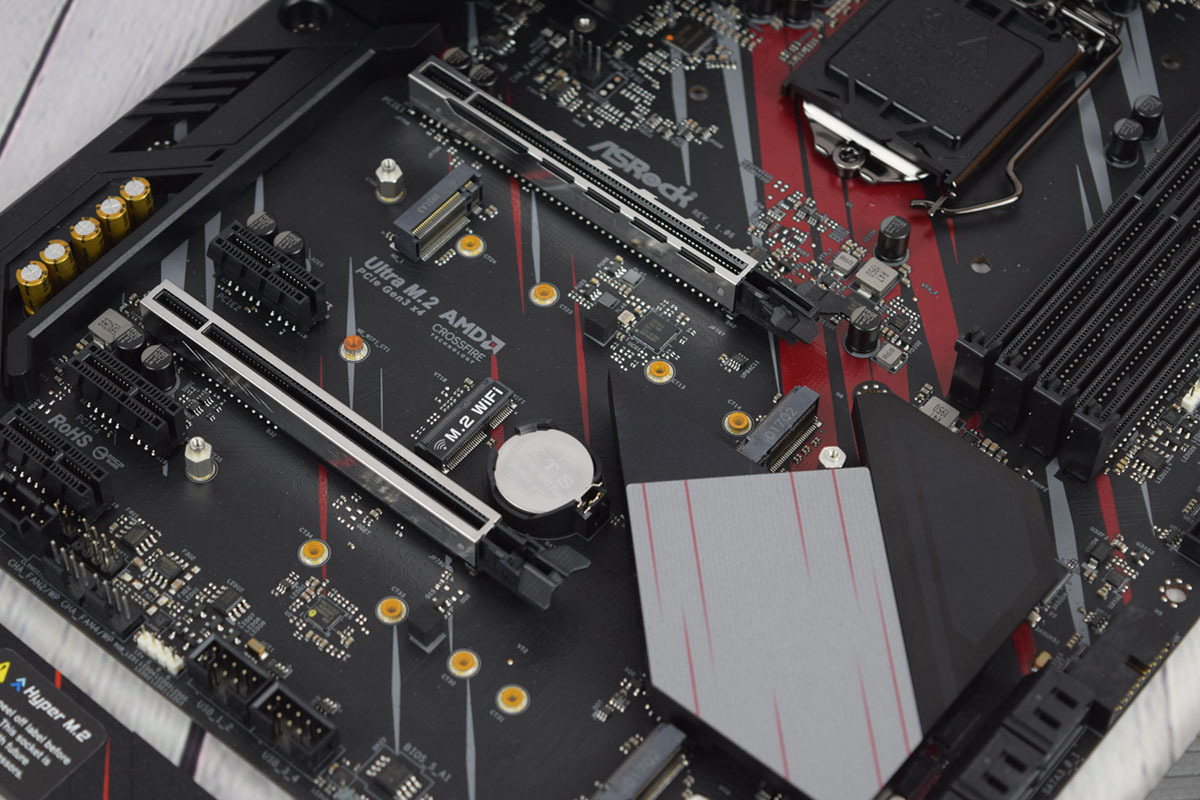