Long an essential tool for multimedia editors, software developers, and other creative professionals, Apple’s 13-inch MacBook Pro ($1,299 as tested) is also appealing to mainstream Mac users seeking higher performance than the MacBook Air in a laptop that’s smaller and less expensive than the flagship 16-inch MacBook Pro. The latest 13-inch MacBook Pro reviewed here is as sleek as ever more powerful than before, thanks to Apple’s new M1 processor. But concurrent updates to the MacBook Air have us recommending it over the smaller MacBook Pro as the best Apple laptop for most people.

As Ever, a Sleek Aluminum Slab

Apple takes a “don’t mess with success” approach to the design, using the same chassis build, with small tweaks, for a few years now. Rather than showing its age, the MacBook Pro still looks sharp and modern, and has inspired quite a few Windows ultraportable look-alike laptops as well. This sleek slab of aluminum is available in your choice of a dark, moody Space Gray or a brighter Silver finish. I do wish that Apple would bring its Rose Gold color option to the MacBook Pro. (It’s only available for the MacBook Air.) 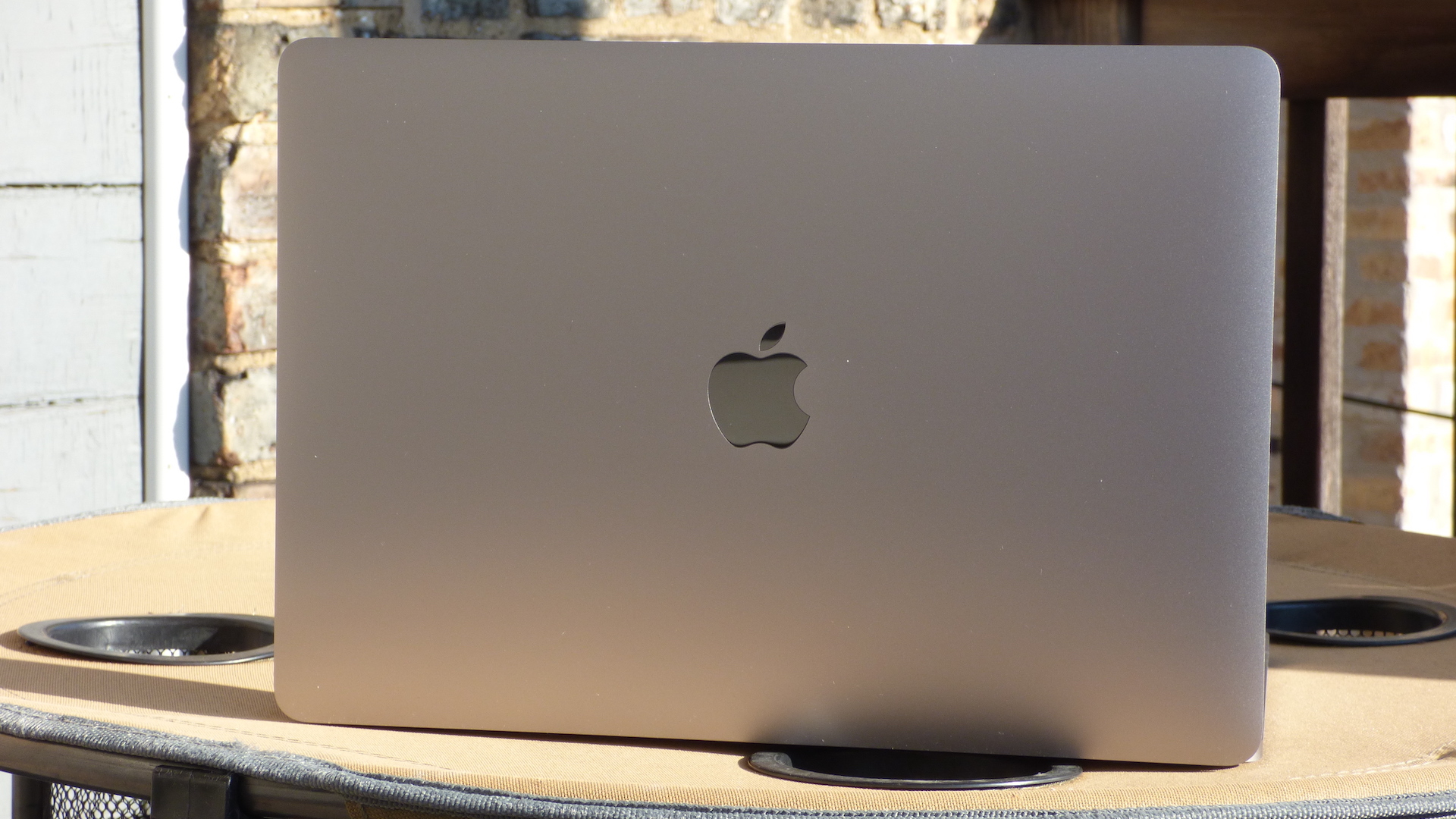 The M1-powered MacBook Pro’s other minor chassis compromise is that it comes with just three ports: two USB Type-C connectors and a 3.5mm headphone jack. A few years ago, this was a major deficiency for professional users who had lots of peripherals, including external drives with the older USB Type-A cables. In 2020, however, this is less of an issue, since many peripherals now come with USB-C connectors. You can also easily pick up USB-C expansion docks and hubs from Apple or third parties. To compare, the XPS 13 also offers just two USB-C ports. The Intel-powered 13-inch MacBook Pro, however, continues to be available with two additional USB-C ports, for a total of four.

On the inside, the MacBook Pro can be configured with either the brand-new M1 chip, or processors from Intel’s Core i5 and Core i7 families. Our review unit features the better-performing M1 (more on that in a minute) along with 8GB of memory and 256GB of solid-state storage. These days, we expect to see double the memory and storage in ultraportable laptops that cost more than $1,000.

Upgrading to 16GB of memory and a 512GB SSD adds an additional $400 to price. Users with gargantuan storage needs can also outfit a MacBook Pro with 1TB or 2TB SSDs; a maxed-out M1-powered configuration rings up at $2,299. That’s a lot of money, though it’s roughly in line with list prices of jacked-up configurations of the Dell XPS 13 and other high-end ultraportables like the Lenovo ThinkPad X1 Carbon Gen 8.

Similar to the enduring chassis design, the MacBook Pro’s Retina display has remained relatively constant in the past few models, and continues in the current one. It’s a 13.3-inch panel with a very high native resolution, somewhere between full HD and 4K. (It displays 2,560 by 1,600 pixels at its peak resolution setting.) Colors appear brilliant, text is sharp, and I especially like the True Tone feature, which optimizes the white balance of the screen for the nature of the ambient light surrounding the laptop.

Both the MacBook Pro and MacBook Air now feature True Tone. Both panels also are now rated to display the entire P3 color gamut, which helps account for the brilliant colors. P3 support and True Tone were once MacBook Pro exclusives, and their arrival on the MacBook Air takes some value away from the Pro’s additional cost. 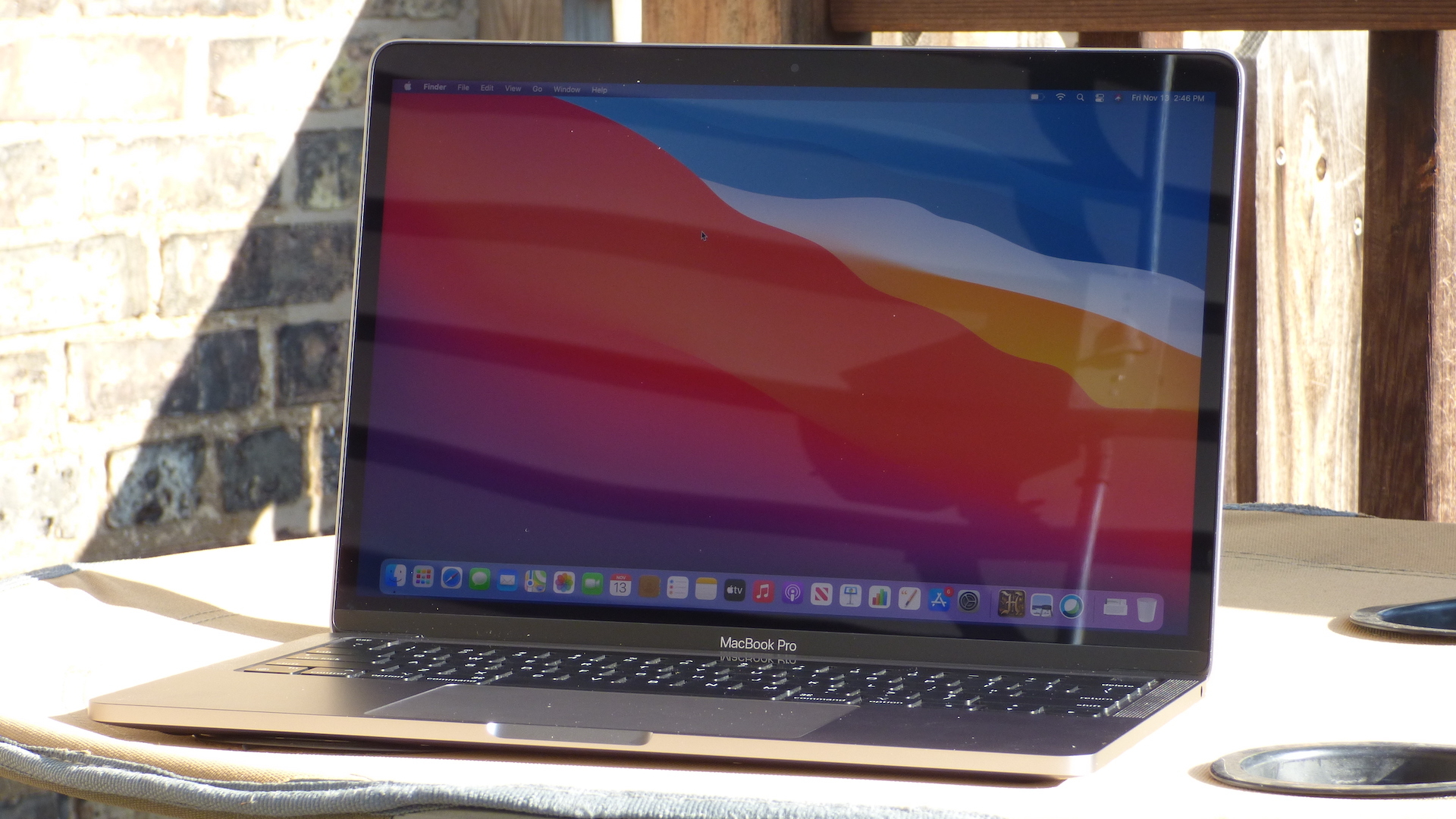 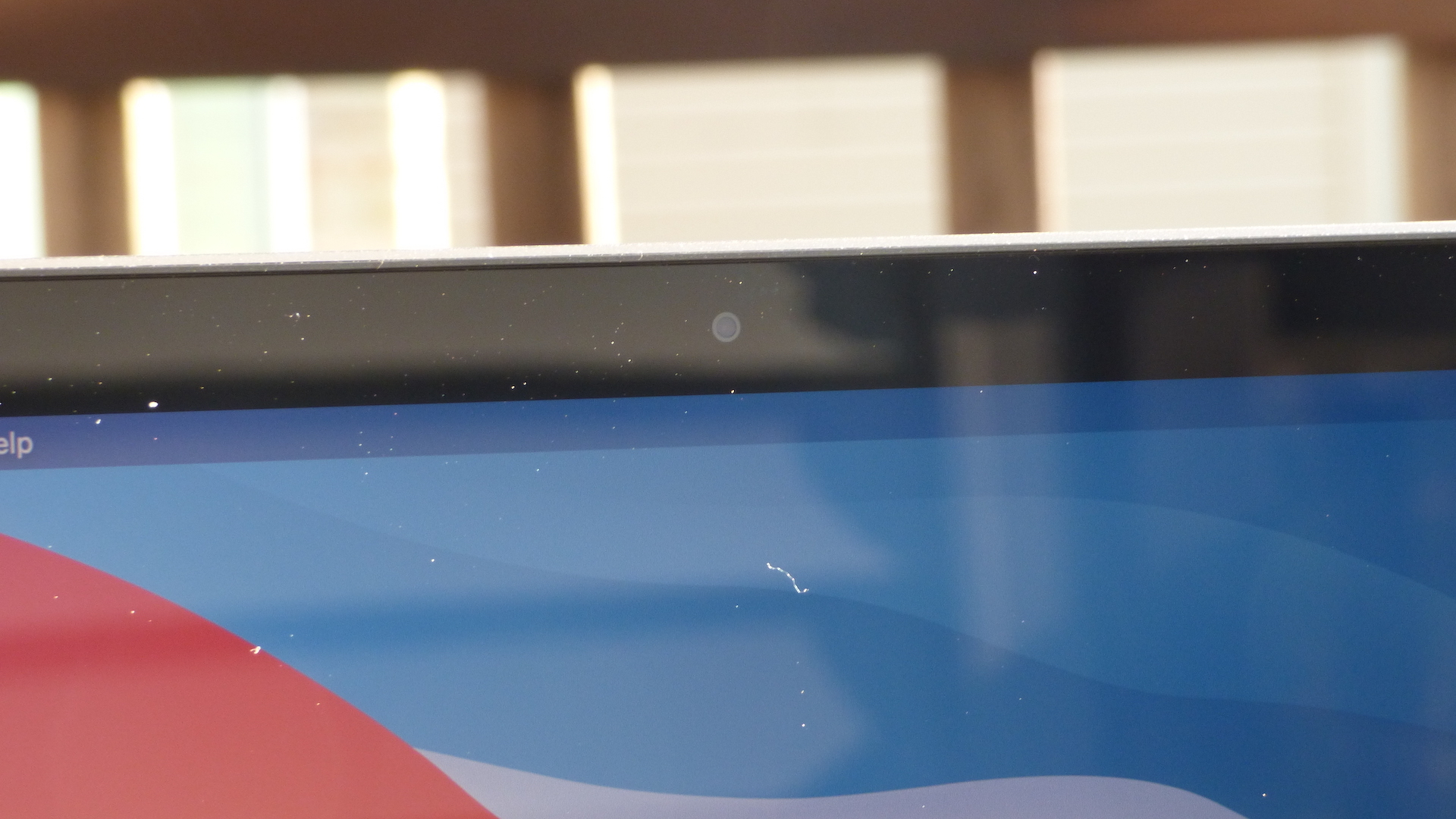 27-inch iMac. Apple says the new mics filter out 40% less hiss than the previous ones. Meanwhile, audio output remains unchanged in this model, though it continues to be excellent. I find the four full-range stereo speakers to offer robust bass and plenty of volume for such a small laptop. The Intel-powered 13-inch MacBook Pro has a slightly improved audio setup. Instead of four full-range speakers, it features two tweeters that fire upward through grilles that flank the keyboard, while frequencies from the woofers emanate from vents on the bottom of the laptop.

A Comfortable Keyboard and Trackpad

After a major misstep, Apple significantly redesigned the 13-inch MacBook Pro’s keyboard earlier this year. The new Magic Keyboard has two-part switches. A compressible rubber dome sits beneath the key cap to provide springiness and bounceback, while a scissor mechanism guides the movement, locking into the keycap at the top of travel to help prevent wobbly keys.

I find the typing experience comfortable enough, and key presses also benefit from the sturdiness of the chassis, with no discernable flex. I appreciate that the keyboard backlight has an ambient light sensor, so it does not activate when you don’t need it. I also prefer the inverted-T arrangement of the four arrow keys on the MacBook Pro to the full-height arrow key arrangement on the XPS 13 and many HP laptops.

The MacBook Pro and MacBook Air both have built-in fingerprint readers, which Apple calls Touch ID sensors. Located at the upper right corner of the keyboard, Touch ID doubles as the power button for the laptop, and can also be used to authenticate Apple Pay purchases and grant permissions to apps without typing your macOS account password. 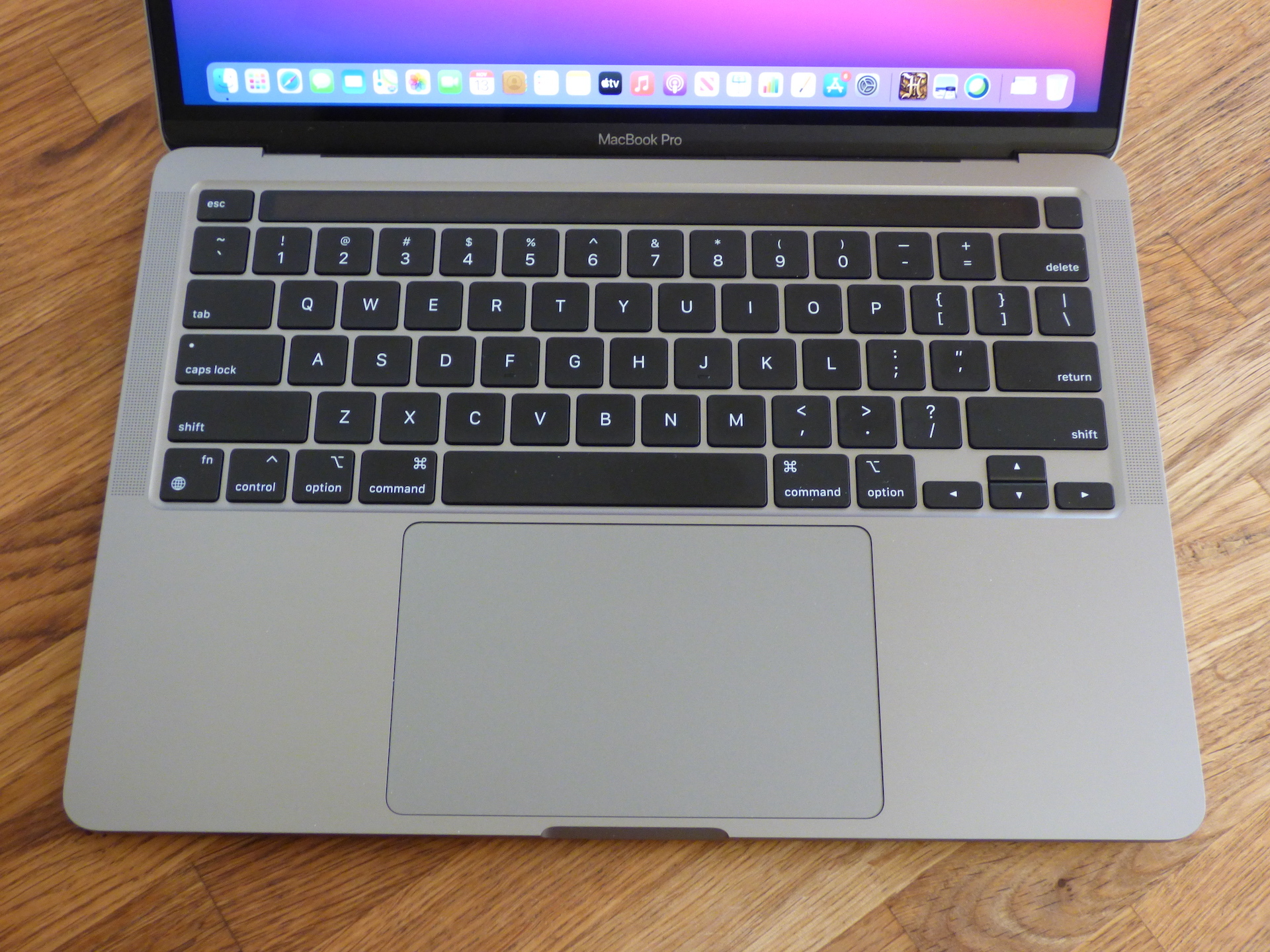 Lenovo Yoga 9i is one of the few haptic-touchpad-equipped alternatives to the MacBook Pro; we’ve yet to test it. 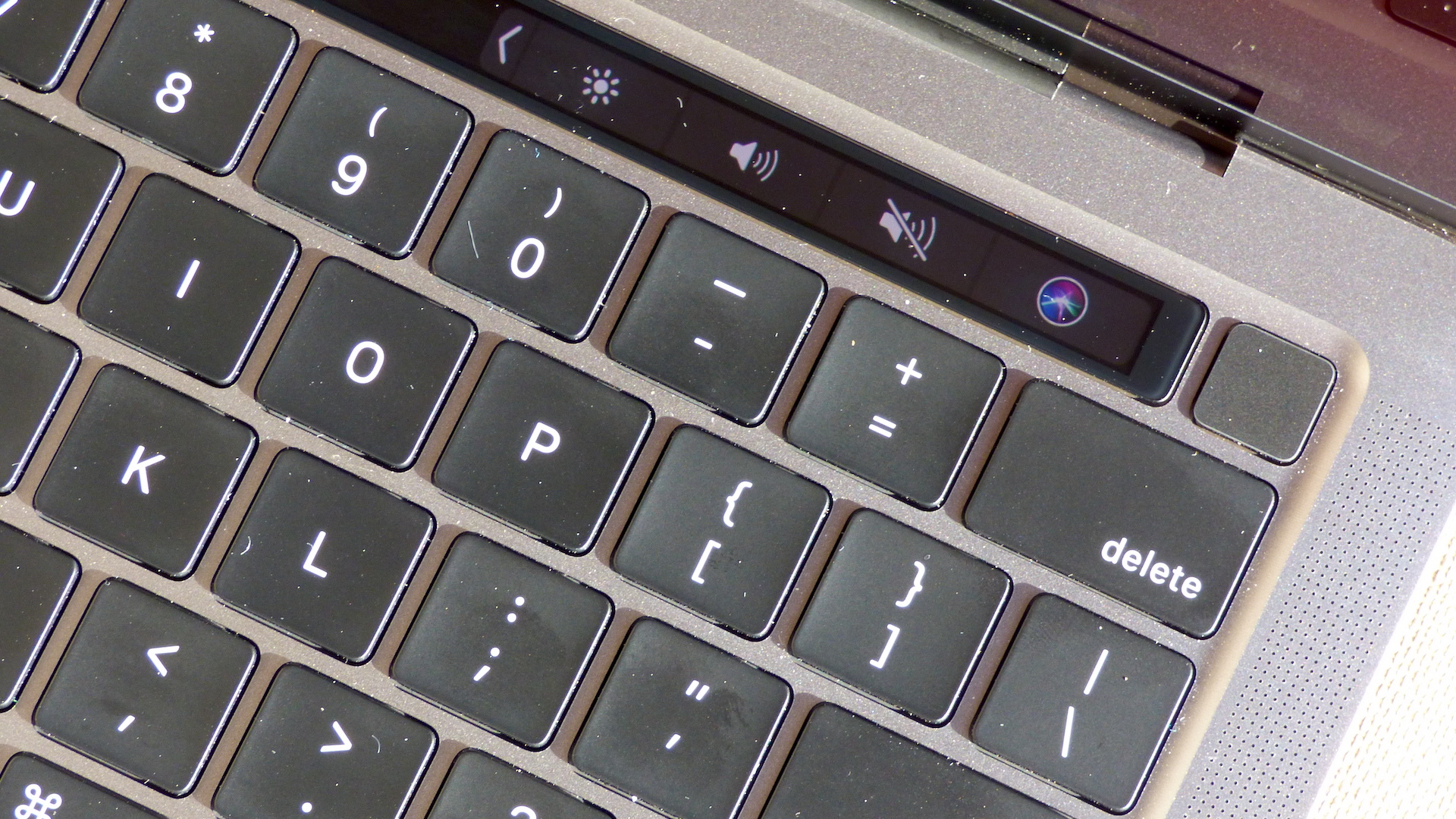 Big Sur, which is preloaded here).

But many other apps have not yet been modified, including many games and mainstream essentials like the Adobe Creative Suite and Microsoft Office. Until new versions of these apps are available, they’ll run on the M1-based MacBook Pro in an emulation layer known as Rosetta 2, which may hamper performance. In my testing, I found the emulation impact to be minimal. Adobe Photoshop did take longer to install and launch than it did on the previous MacBook Pro, but manipulating images once the app was open is mostly smooth. (For more on how the M1 chip works, check out our Apple M1 chip explainer.) 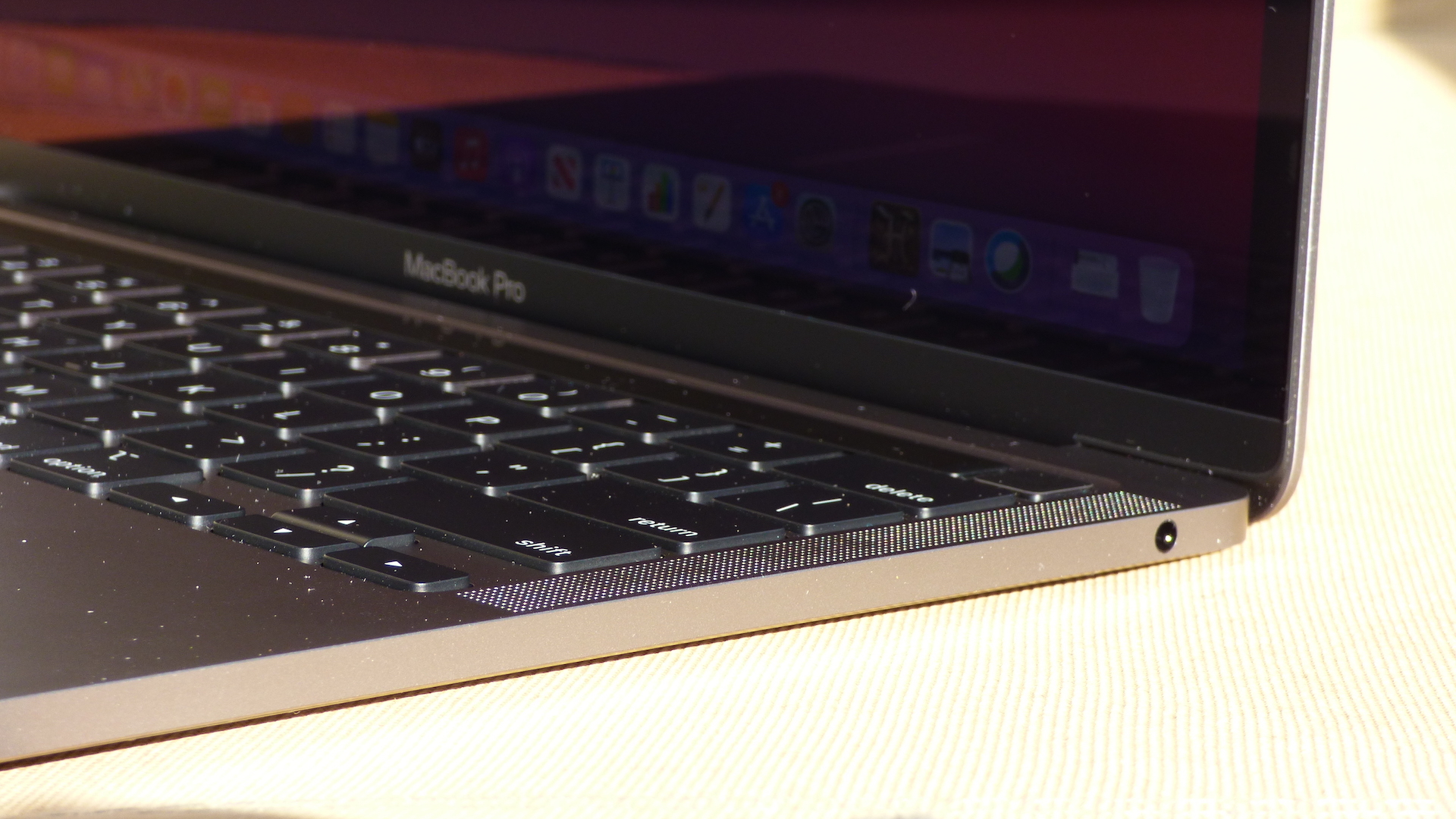 HP Spectre x360 15, which has a beefier H-series Intel Core i7. (The beta version of Handbrake that runs natively on the M1 is not available for Windows yet, although the results of the earlier Windows version are roughly comparable.)

It’s a similar story when it comes to 3D rendering as measured using the CPU-centric Cinebench app. Cinebench is derived from Maxon’s Cinema 4D multimedia editing suite, and provides a punishing workout to test the performance of a system’s main processor. In the older R15 version, which runs natively on Intel processors but in Rosetta 2 on the M1, the MacBook Pro rivals the performance of the Spectre x360 and is better than the XPS 13 and ThinkPad X1 Carbon. Switch over to the latest R23 release of Cinebench, which runs natively on both Intel and M1, however, and the MacBook Pro’s superiority is clear. (See more about how we test laptops.)

Image-editing performance in Photoshop closely mirrors the results of the video encoding and 3D rendering tests. Our Photoshop benchmark involves applying a series of 10 complex filters and effects to a standard JPEG test image. We time each operation and, at the end, add up the total execution time. The Spectre x360 15, XPS 13, and ThinkPad X1 Carbon all performed slightly better than the MacBook Pro, but the results are clustered within about 20 seconds of one another.

So it’s clear that the MacBook Pro’s general computing performance ranges from merely average to exceptional, depending on whether you’re running the latest software that’s optimized for the M1. But many users with basic computing needs and an affinity for touch screens might be considering a tablet like the iPad instead of a conventional laptop. Apple has long claimed that its A-series processors used in iPhones and iPads are competitive with or superior to many laptops, but it’s clear that they can’t hold a candle to the M1 in the MacBook Pro or the MacBook Air.

On the multicore Geekbench 5 test, which runs natively on all platforms and processors that it supports, the M1-powered MacBook Pro achieved a result of 7,771, compared with 5,000 or less for the iPad Pro and iPad Air. Browser-based tests like JetStream, Basemark, and WebXPRT confirm these results. The M1 is by far Apple’s best-performing processor.

Macs are not typically the platform of choice for 3D gaming, but with the M1, the MacBook Pro could serve as a decent option for casual gamers who like to relax with a less-demanding game once their work is done. On the GFXBench 5 test, which supports Apple’s Metal graphics API and runs natively on both M1 and Intel chips, the MacBook Pro can achieve frame rates of around 80fps on the demanding Aztec test at a resolution of 1400p, and around 180fps on the less-intense Car Chase test at 1080p resolution. These frame rates are more than enough for silky smooth gameplay.

But the library of available games for Macs is far smaller than it is for PCs, and few of those that are available for Macs run natively on the M1 chip yet. So most gamers will experience something more akin to the results of the Heaven benchmark, an older Intel-only test. The MacBook Pro’s frame rates on this test were markedly lower than both the XPS 13 and the Spectre x360 15, the latter of which is equipped with a dedicated Nvidia GeForce GTX GPU. Frame rates on the in-game benchmarks of demanding titles like Shadow of the Tomb Raider and Hitman (2016) confirm these results.

Perhaps the most noteworthy part about all of these benchmark results is that the latest M1-equipped MacBook Air is extremely competitive with the MacBook Pro’s results. In the few cases where the MacBook Pro is better, it’s likely due to the Pro’s active cooling system. The MacBook Air lacks a cooling fan, so it may not be able to run demanding workflows for longer periods of time as well as the MacBook Pro can. Though the MacBook Pro was mostly silent in my testing, I did notice the fan spool up considerably while transcoding video and rendering 3D images.

The MacBook Pro offers excellent battery life. It clocks in at more than 22 hours on our rundown test, which involves looping a locally stored HD video at 50 percent screen brightness with Wi-Fi and Bluetooth turned off. That’s impressive when compared with the XPS 13 and previous MacBook Pros, each of which also offer excellent battery life. But it’s still shorter than the 29 hours that the new M1-equipped 2020 MacBook Air managed on our battery test, further cementing the Air’s position as the better choice for most buyers.

With M1, More Pro Than You Know

With Apple’s M1 chip, the MacBook Pro remains a workhorse if you want a compact laptop that is still powerful enough to perform processor-intensive workflows. Minor shortcomings like the lack of robust touch support and a meager port selection don’t detract much from the exceptional display quality, comfortable keyboard and trackpad, and sleek chassis.

Not everyone will be able to take advantage of the extraordinary performance that the M1 is capable of right now, however. This is especially true of much of the MacBook Pro’s target audience. If you use the Adobe Creative Suite apps, there’s no performance benefit yet. This will continue to be the situation until more apps are reworked to run natively on Apple Silicon. (Apple notes that an Adobe Lightroom Universal version should debut in December, and native Adobe Photoshop in early 2021.)