The video editing software included with Apple devices hasn’t changed much in the past several years, but it still beats what you get in Windows 10, which is just the (admittedly improving) video capabilities built into Windows’ Photos app. Apple iMovie includes excellent tools for media organization, color grading, speed, green-screen effects, narration, and soundtrack in your digital movies. It’s not always the first with new format support—there’s still no 360-degree video support—but it does work with 4K and HEVC. iMovie also boasts some of the best storyboard-based movie making tools for novices—Trailers and Movies. It’s a PCMag Editors’ Choice for entry-level video editing.

Since we last updated our review of iMovie, Apple has introduced few major features, but if you need to get really serious with video editing or to work with many tracks, 360-degree footage, or multicam, you should really move up to Final Cut Pro X, which will seem familiar to iMovie users, despite its vastly greater video editing power and feature set.

Apple’s iMovie doesn’t offer the 100-track timelines, multicam, customizable transitions, and motion-tracking options that PC consumer video editing software like Corel VideoStudio and CyberLink PowerDirector offer, but if you just want an easy way to put together some video clips and still images into a presentable movie, iMovie is hard to beat. It’s particularly suited to iPhone video shooters who want to make something appealing from their clips and photos.

Getting Started With iMovie

If you purchased a Mac on or after October 20, 2010, you can get iMovie for free from the Mac App Store. Essentially, that means the app is free on nearly all Macs in use. The latest version requires OS X 10.14.6 or later and weighs in at over 2GB. In testing for this review, I installed it on a 21.5-inch iMac with a 3.1GHz Core i7 CPU and 16GB RAM and on a MacBook Pro with Touch Bar and a 3.1GHz Core i5 CPU and 8GB RAM.

On the iPhone’s iOS 14, iMovie is preinstalled, but you can remove it and reinstall it from the App Store. I tested this version of iMovie on my iPhone X. 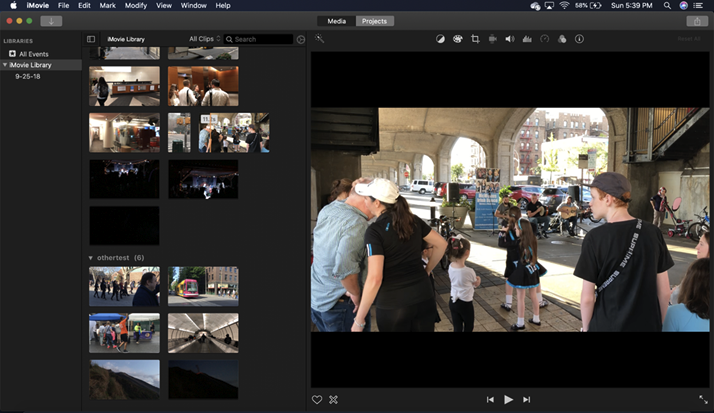 macOS Catalina) that starts out with two tabs at top center for Media and Projects. On the left side of the Projects view window is a single huge plus-sign button. When you click this, you get two choices: New Movie and New Trailer. You import content by tapping the down arrow icon.

The standard three-pane video-editing interface shows up in iMovie, with source content at the top left, preview top right, and the timeline spanning the bottom of the screen. But that’s about all that’s standard. There are no track divisions as in other editors; instead, you drag clips down to the timeline, where they’ll extend to represent their running time. You only get two video tracks, which is a far cry from the 100-plus allowed by several enthusiast applications. Adobe Premiere Elements. Content that’s used in your project will show up in the separate Project Media section of the source panel, however. The Projects page makes finding what you’re working on a snap, and it’s always accessible from a button at the top left. It’s less fussy, though less powerful as an organizer than Premiere Elements’ separate Organizer program.

Dragging inserted clips around in the timeline is easy, and they automatically cling to the adjacent clips. This action also creates Clip Connection lines, which helpfully keep media together when you move one of the clips. You can trim them in the source panel before entering them into the project, or simply drag the end handles to change the in and out points. For more control when working with a transition between two clips, the Precision Editor expands the view to show you the parts of the clips before and after the edit. It also indicates how many seconds (but not frames) are in the clips and transitions. 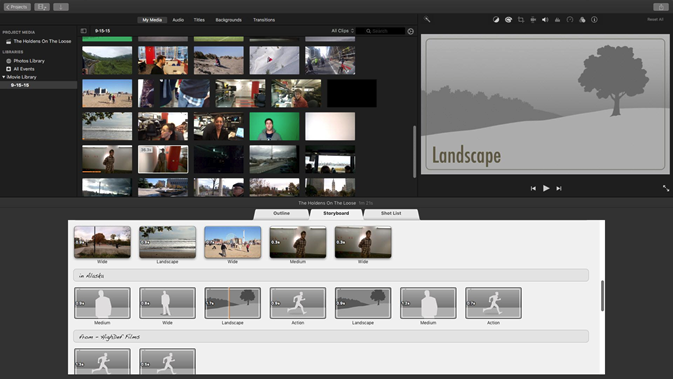 Final Cut Pro X. You can drop a selected clip into the timeline, split clips, and add overlays (including PiP, greenscreen, and cutaway). That’s about it. 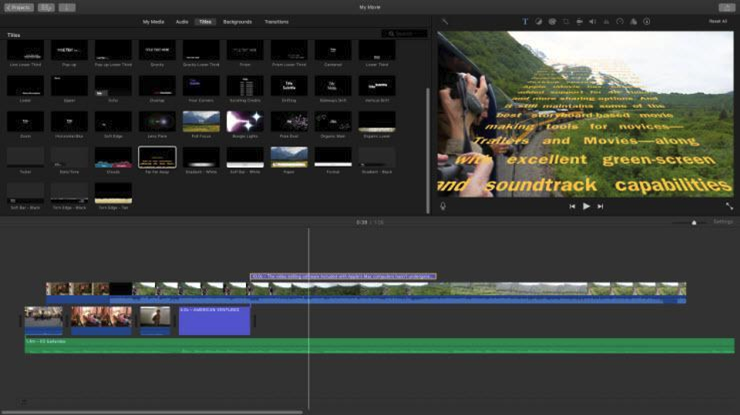 GarageBand for background music, and you can add from a decent selection of background soundtrack and sound effects, including four levels of pitch up and down, cosmic, and robot. There are controls for equalizing, hum reduction, voice enhance, and bass and treble reduction, though these are one-click affairs that aren’t adjustable as they are in VideoStudio. The Reduce Background Noise setting, however, is adjustable with a slider control.

You can easily share your creation via email, to your iTunes Library, to YouTube, or Vimeo. You can no longer share directly to Facebook, but there’s a Prepare for Facebook option that creates an output file formatted to work on the social network. (The Theater feature for sharing and viewing among Apple devices has been discontinued. What? You never heard of the Theater feature? That’s why it was killed.) You can also just save it to a video file and even choose the resolution and bandwidth, but you can’t choose the actual file type the way competing consumer video editors let you. The saved MP4 format is pretty universally supported, however.

As with everything Apple, iMovie ties in beautifully with the rest of the company’s ecosystem: It closely mirrors iMovie on iOS (see below) and makes the path to the pro level Final Cut Pro X quite smooth. 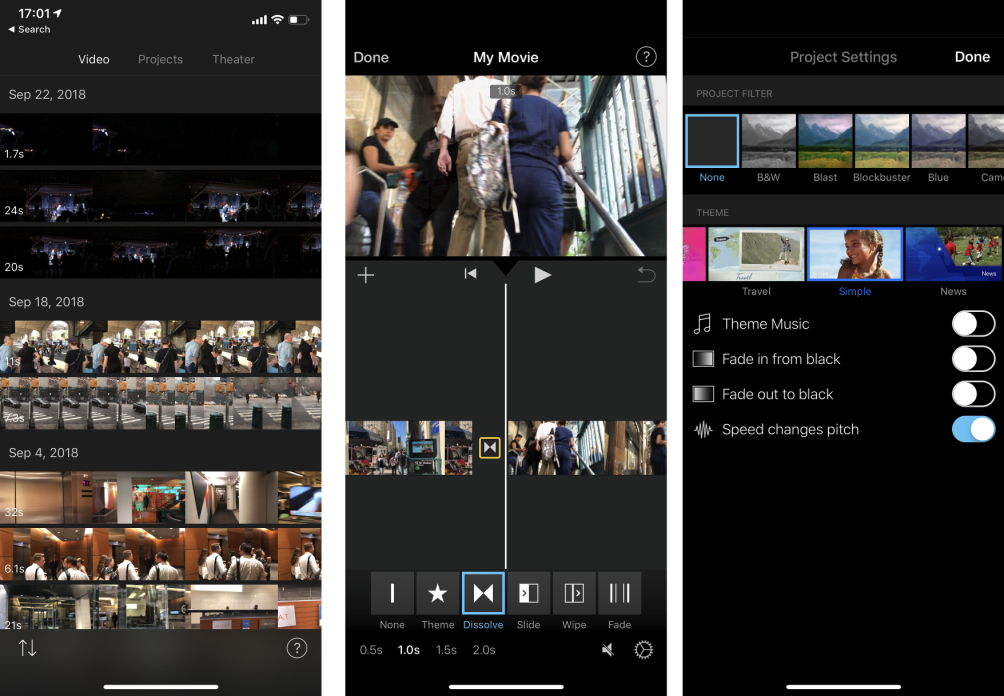 iPhone 12, adds support for HDR (the Dolby Vision version, which the new phone can use), includes lots of new title customizations, imports and shares 4K 60fps content, and lets you use solid, gradient, and patterned backgrounds. The previous update added 25 new background soundtracks.

Transitions are clearly indicated with arrows in small boxes between the clips. Clicking on these lets you change the transition type. You can add more media to your movie by tapping a Plus sign, and reordering content is a simple matter of tap-hold-drag-and-drop—like moving app icons around your iPhone home screen. You can also intuitively pinch-zoom the whole timeline. If any interface element is unclear, tapping the question mark icon reveals tooltips that tell you what each control does.

To start creating a movie on mobile, you click the plus sign. Just as on desktop, you then see a choice of Movie or Trailer. Both options offer templates, with Trailers going further in guiding you as to what type of scenes to include. The Movie option includes default transitions and titles, optional background music, and applies motion to any still images you’ve included.

Adobe Rush (which requires a Premiere Pro subscription) also lets you do this, with an option to maintain audio pitch and other advanced options. Outputting movies on the iPhone or iPad is like sharing from any other iOS app.

If you’re a video hobbyist in the Apple ecosystem, using iMovie is a no-brainer. The app’s slick interface and powerful tools make it our top pick for entry-level video editing software. iMovie can also serve as a bridge to Apple’s pro video editor, Final Cut Pro X, with which it shares many interface and functional characteristics. If you want to do some radical things with video that aren’t possible in iMovie and you don’t want to spend $300 on Final Cut, you might want to try out a couple of very powerful PC video editors that have won PCMag Editors’ Choice, CyberLink PowerDirector and Corel VideoStudio. If you’re sticking with a Mac but aren’t ready for Final Cut, Adobe Premiere Elements offers a good compromise.

Scott Pilgrim vs. The World: The Game – Complete Edition (for PC)

The Best Cutting-Edge Prototypes at CES 2021

CES 2021: Affordable 8K TVs Are Coming, But You Shouldn’t Buy Them

Perfect Corp Brings the Skincare Counter to Your Phone