If you want to play classic games on the go (and don’t mind navigating the gray and churning emulation waters), an emulation-based gaming handheld is the way to go. The Retroid Pocket 2 impressed us last year with its excellent build quality and strong performance, but its Android platform is a huge pain to configure into a smooth, easy-to-use interface. The Anbernic RG351P, on the other hand, is much easier to use. The Linux-based handheld has an EmuElec/RetroArch frontend that’s simple to play out of the box. It isn’t as powerful as the Retroid Pocket 2, and it’s missing features like Wi-Fi and HDMI output, but the Anbernic RG351P is well-built and accessible. That’s an experience worth the $98.99 price.

The RG351P is roughly the same size and shape as the Retroid Pocket 2, measuring 2.8 by 6 by 0.7 inches (HWD). It’s available in black, white, or (inspired by the original Game Boy Advance) purple versions. The edges are a bit more rounded than the Retroid Pocket’s corners, and the handheld’s back panel features two rubberized grips.

The RG351P’s center is dominated by a 3.5-inch 480-by-320 IPS LCD. It has half the pixels of the Retroid Pocket 2’s 3.5-inch 640-by-480 screen, but that isn’t really an issue for the games the system is designed to emulate. The 3:2 aspect ratio is a little awkward compared with the more common 4:3 aspect ratio that the Retroid Pocket 2’ sports, causing 4:3 games to be slightly pillarboxed. They still look quite good, even with black bands that blend with the black screen frame. The aspect ratio is actually a benefit for Game Boy Advance’s 3:2 games, which scale perfectly to the RG351P’s screen. Regardless of the resolution and aspect ratio, the screen is bright and colorful, and easy to view in most lighting conditions.

Nintendo Switch or a PlayStation gamepad, with two parallel analog sticks on either side of the screen. The L1 and R1 triggers are easily found on the handheld’s top left and right corners, while the L2 and R2 buttons are located further inward on the top edge. It makes those buttons harder to easily reach than conventional triggers, but it gives the RG351P a slightly flatter profile that’s easier to tuck into a pocket.

Start and Select buttons sit between the direction pad, face buttons, and the screen. The handheld lacks a dedicated Home button, but clicking the two analog sticks at the same time while you’re in a game opens the RetroArch’s main menu. The power button is found on the RG351P’s left edge, and is recessed enough that you won’t accidentally press it while playing. On the opposite side, a volume wheel provides quick adjustments to the system’s audio, which comes out through two small speakers on the bottom edge. The bottom edge also holds a slot for the required (and included) micro SD card, and a recessed Reset button. The top of the handheld features two USB-C OTG ports, one of which is used for charging, and a 3.5mm headphone jack.

The system feels very solid and well-made, like the Retroid Pocket 2. The system has a sturdy, matte-plastic body, with no loose parts. A plus-shaped direction pad sits above the left stick, while A/B/X/Y face buttons sit above the right stick. The analog sticks feel smooth and responsive, like Switch sticks, and the direction pad and face buttons feel springy. It’s another good-feeling handheld that comes close to Nintendo’s standards. 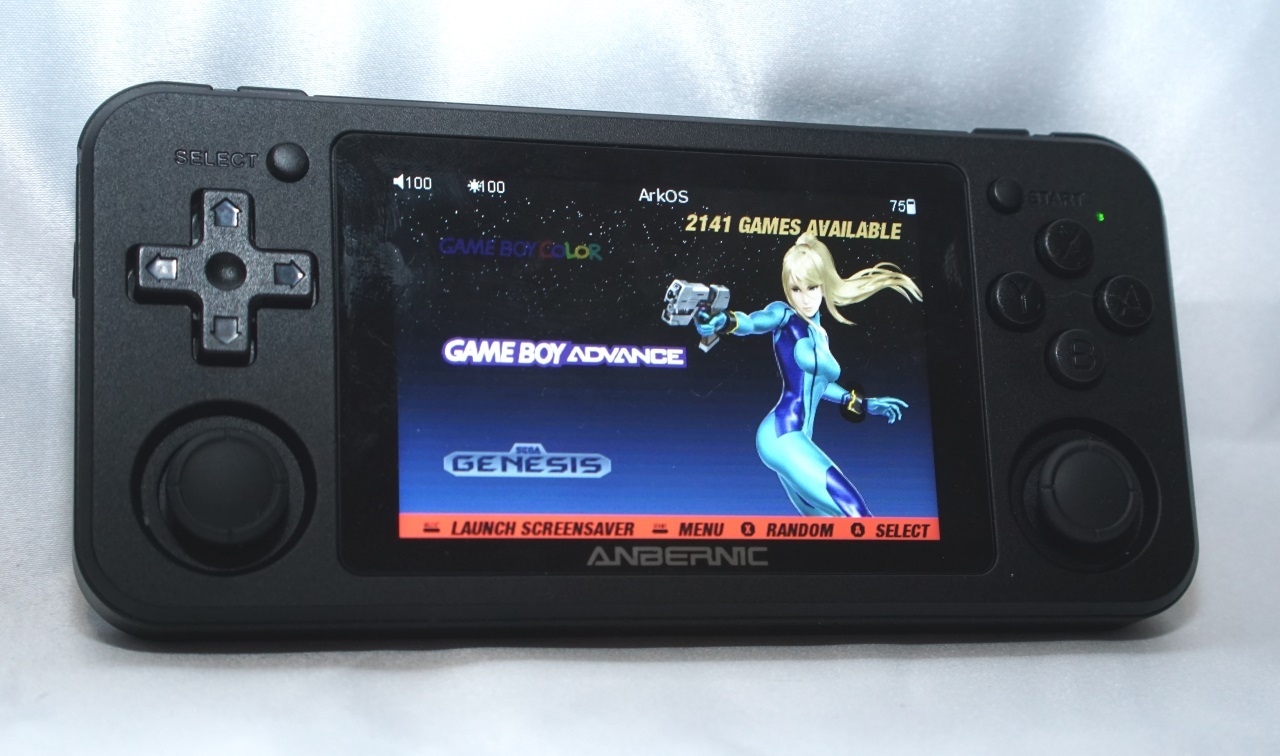 351ELEC is an EmuElec fork designed specifically for the RG351P, while ArkOS is another operating system built on Ubuntu and designed for all RK3326-based gaming handhelds. Either is a good upgrade over the default operating system, and are easy to set up if you’re comfortable using free software to write disc images to memory cards. RetroGameCorps has a very useful, easy-to-follow guide on updating your RG351P’s firmware.

Whether you stay stock or use one of the third-party operating systems, the RG351P is much easier to get comfortably running than the Android-based Retroid Pocket 2. While the Retroid 2 is more powerful that the RG351P, its Android interface means you have to either settle on a very clunky interface designed for a touch screen, or go through the more complicated process of setting up a more friendly frontend like Pegasus. The RG351P is ready out of the box, and swapping around operating systems is a much quicker process. Of course, without built-in Wi-Fi, updating those operating systems is more of a hassle, but in terms of immediate functionality the Anbernic handheld is simply better.

The RG351P’s battery life is a bit better than the Retroid Pocket 2, though. You can get roughly six hours out of the handheld before you have to charge it. Of course, more taxing games will probably drain the battery faster. 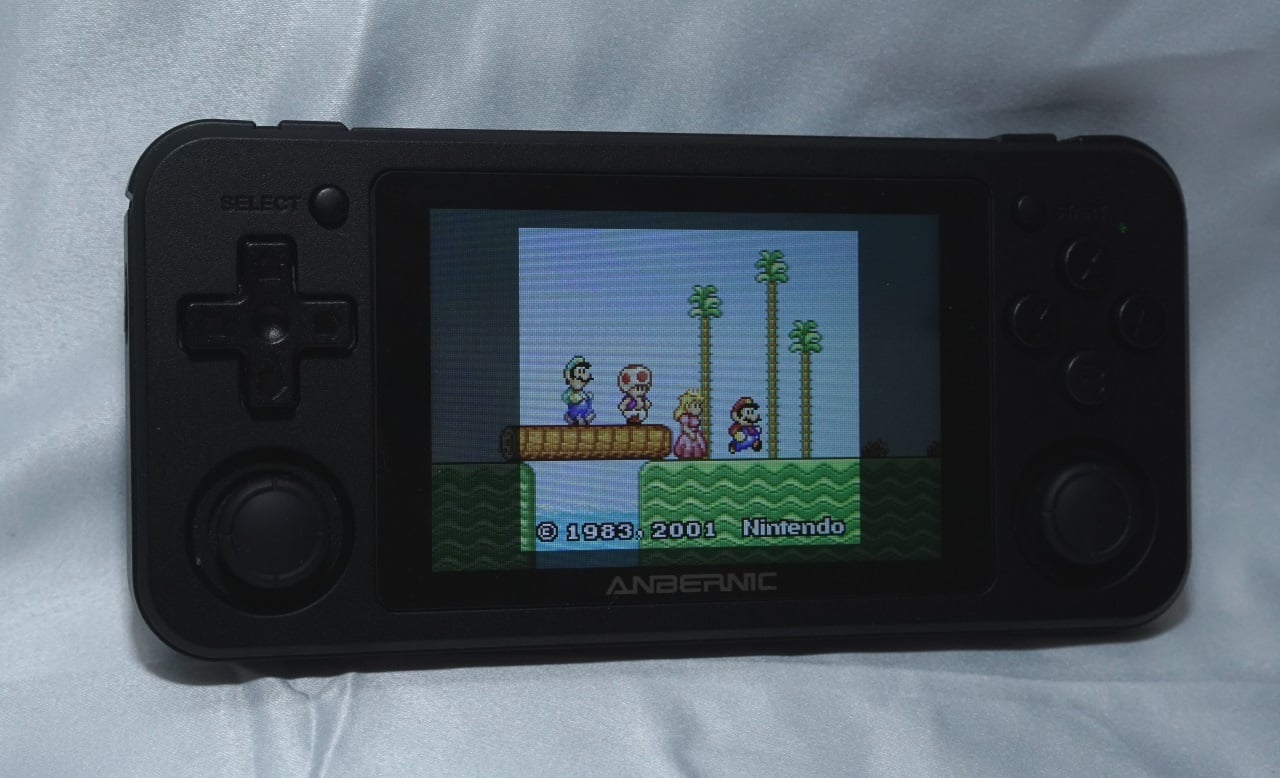