Adobe considers the audience for its consumer-targeted video editing software to be what it calls memory keepers, who tend to be women in their 40s documenting, embellishing, and sharing their special family moments. But really, anyone who wants to create compelling videos without the complexity of a professional application like Premiere Pro or Final Cut Pro can take advantage of Premiere Elements. As well as being extremely easy to use, it lets you go fairly deep with multitrack and keyframe based editing—or you can ignore all that and use its more-automatic tools. The program trails PCMag Editors’ Choice, CyberLink PowerDirector, in the breadth of effects, rendering speed, and formats it supports, however.

Premiere Elements is available for 64-bit editions of Windows 8.1 and Windows 10 (version 1809 or 1903 recommended) and macOS 10.12 through 10.14. I primarily review the Windows version here, though I have tested the software on an iMac, as well. You can get the program together with Photoshop Elements for $149.99 or as a standalone app for $99.99. These are one-time fees—no subscription needed. Note that Premiere Elements is not a part of Adobe Creative Cloud service. If you’re upgrading from a previous version, those prices drop to $119.99 and $79.99, respectively. A free trial gets you 30 days of full-featured program use, but any videos made with the trial get stamped with a watermark. 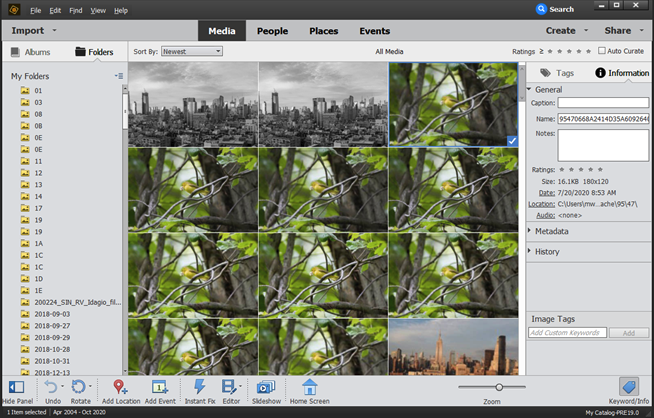 Windows. I’m happy to see Adobe also putting in the effort to support this input option, at least in the Organizer and in Premiere Element’s Quick mode. That said, the support could be better. You can scrub through video and add and split clips, but some controls are still on the small side for pudgy-finger manipulation. There’s no touch-specific interface option like that in Photoshop and Lightroom.

As with most consumer video editing software, the program creates a lower-resolution proxy version of your clips for quicker performance while editing. You can hit the Render button at any time to see the full-resolution movie, but this can take several minutes, depending on your video length and resolution. A line above the timeline shows which clips are rendered—green for done, and yellow for not ready.

You can capture and import video and photos from within the editor as well as from the Organizer. The Editor’s Add Media button offers choices to get media from the Organizer (which opens a preview panel), from files and folders, or directly from cameras and devices. Elements supports 4K content, so owners of a GoPro Hero or any recent flagship smartphone can take advantage of their cameras’ top resolutions. In my testing, even 5K footage from a recent GoPro doesn’t present a problem.

Premiere Elements now supports the H.265 High Efficiency Video Codec (HEVC) format on Windows. This finally worked for me with the 2021 version, but when I added an HEVC clip to an existing project containing non-HEVC content, the results were unreliable, sometimes showing ghost images of the other clips and sometimes being oddly framed. When I started a fresh project and inserted HEVC there were no such problems. Also note that the program doesn’t let you export to HEVC format, only to import it.

The program still doesn’t support 3D or 360-degree VR clips. Those could be considered niche usage cases, but competitors such as Magix Movie Edit Pro, Vegas Movie Studio, and PowerDirector (as well as Final Cut Pro on the Mac) have long supported these formats, and it’s not that unusual to see 360 video in social media posts.

Premiere Elements also lacks screen-cam recording, which lets you create videos of desktop activity on your computer screen, a feature offered by Corel VideoStudio Pro and PowerDirector. And there’s no multicam editing feature, which lets you sync the same scene shot with different cameras at different angles, as found in PowerDirector and Magix Movie Edit Pro. Mac users get strong multicam editing in Final Cut Pro X, our Editors’ Choice for video editing on the Mac.

The Project Assets panel helpfully drops down to show thumbnails of all your clips, audio, and image files. This resembles the way pro software uses bins to keep track of assets. There’s also a helpful History window, which lets you see what your project looked like at any point during your previous edits. You can also search within the transition and effect selection boxes, which I find helpful.

One thing I miss on the Expert mode’s timeline is the ability to quickly solo a track, hiding all the others, though you can hide either a video or audio track by clicking on the film or speaker icons at the head of the timeline. Also missing is the ability to zoom the timeline in and out with the mouse wheel, which most competitors offer. You can’t pop out panels into their own separate windows as you can in Vegas Movie Studio, but you can use a dual-monitor setup. A final interface annoyance is that Premiere Elements’ windows don’t follow Windows standards, so you can’t for example drag a window to the side to take up half the screen or shake the title bar to minimize other programs.

Quick Mode Edits Your Clips for You 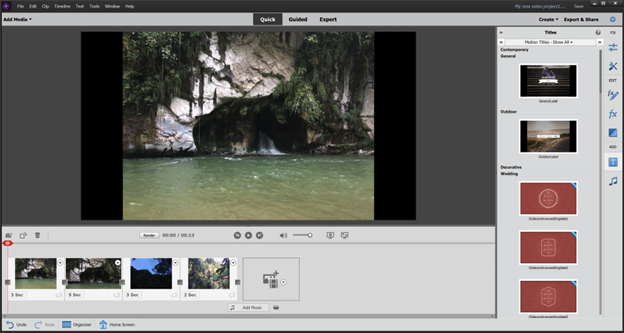 iMovie-like storyboard view of clips and is one of the cleanest views you’ll see anywhere. A clear scrubber lets you move through your movie, and you can easily apply freeze-frames and rotation using buttons. Smart Trim and speed-altering are within easy access from each clip thumbnail. Another button lets you add music, with options to fade in and out.

Premiere Element’s Smart Trim identifies poor-quality sections of your media and can delete them all at once. Style choices—People, Action, and Mix—affect what sections of the clips are retained. It automatically chose Action for my bike-stunt test video, and trim suggestions appeared with no waiting required. You can preview the suggested trims, and it did a good job of selecting the most active scenes, though one short section was dull, and some further-away bike tricks weren’t included. It also removed out-of-focus and shaky sections, which is helpful. Handles let you easily extend its selections, and you can simply hit the Delete key to remove one. If you have long footage of limited interest, Smart Trim is a helpful tool.

Premiere Elements lets you apply video stabilization from either Quick or Expert mode by choosing Shake Stabilizer from the Adjust panel. There are two methods of stabilization accessible from buttons—Quick and Detailed. Quick isn’t actually that quick: My 1:35-minute clip took about 10 minutes to stabilize in Quick mode. At least Premiere Elements shows you the progress—minutes left, percent done, and current frame.

After that, a banner message says, “To avoid extreme cropping, set Framing to Stabilize Only or adjust other parameters.” In my testing, this meant going into the Detailed panel, and then choosing Advanced, where I had a lot of choices, such as smoothness, crop percent, and edge feather. It’s a powerful tool, but you’ll need patience for long clips. Large bumps aren’t always fixed, even with Smoothness set to 100 percent. One cool choice is Synthesize Edges, which prevents cropping.

Dehaze, a feature that has made its way into a lot of photo editing software, is available from Premiere Elements’ Effects panel’s Advanced Adjustment section. It did a fine job of adding contrast and saturation to my test landscape footage, as you can see in the nearby screenshot.

The Reduce Noise tool is another example of bringing something from photo editing to video editing. Amusingly, the program has long had a tool for adding noise as an effect, but not a correction. You simply drag the Reduce Noise icon from the FX menu on the right, and then the adjustments for the tool open. You only get three settings for the amount of noise reduction: Default, Medium, and High. It’s not going to turn a horribly noisy clip into a great one, but it does smooth out very grainy looking shots.

Atua Mo’e are good examples. CyberLink PowerDirector also appeals to this audience with its Action Cam Center tool. Like that tool, Adobe’s Action Cam Fix Action Cam Footage Guided Edit addresses lens distortion, lighting, and color. The two tools differ in that Adobe directs users to the previously described Smart Trim tool, while PowerDirector adds effects like stabilization, time-shift, and freeze-frame. The Adobe tool does improve footage, but for my money, the PowerDirector version of this offering is more powerful.

The Create an Animated Social Post owes its existence to those punchy captioned videos you see on Facebook and Instagram. The guide starts you by directing you to the motion title tool. It also has you apply motion to the main video so that it slides from left to right. Finally, it directs you to the social sharing panel. In all, it’s not a very ambitious tool, but some may find it helpful.

The Color Pop Guided Edit replicates an effect that most people first saw in Spielberg’s Schindler’s List, in which a powerful effect highlighted a young girl in a red coat in the midst of a primarily black-and-white movie. You start with the Color Pop Guided Edit by switching to Expert mode, and then pick the Red Noir Hollywood Look from the Effects menu. Then you open the HSL Tuner tool, from which you can adjust not only the red content, but also that of seven other colors. One weakness of this approach is that it pops everything of the specified color. In CyberLink PowerDirector and other apps, you can create a mask or use motion tracking to limit where the color pops. 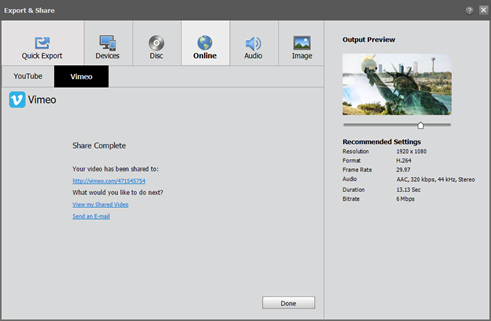